Exactly 311 years ago today, the battle of Malplaquet was fought near the border of France. To commemorate this anniversary, Simon MacDowall, author of the upcoming Campaign title Malplaquet 1709, gives a brief overview of this conflict. 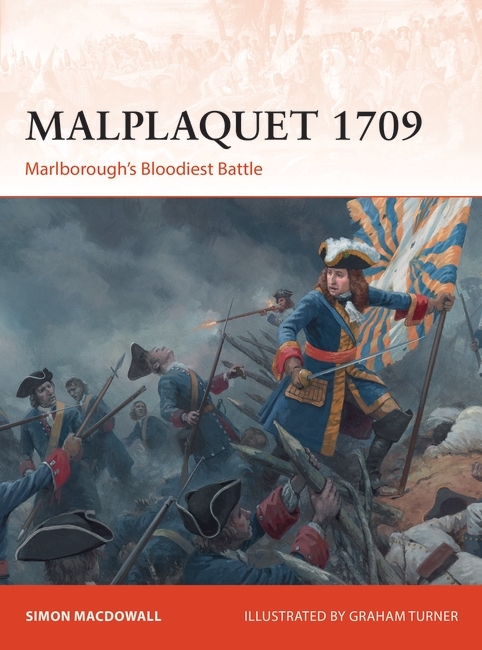 On 11 September, 311 years ago, hundreds of thousands of men from all over Europe fought over a few kilometres of ground across the modern Belgian/French border near Malplaquet. With over 35,000 casualties, Malplaquet was the bloodiest battle of the 18th century. The scale of the slaughter shocked Europe and caused all sides to seek a way out of the costly War of Spanish Succession.

John Churchill, the Duke of Marlborough, is rightly celebrated as England’s greatest general. His rare combination of tactical, strategic and political genius gave the British, Dutch and German allies victory after victory over Louis XIV’s French. At Blenheim (1704), Ramillies (1706) and Oudenarde (1708), Marlborough inflicted catastrophic defeats on his French enemies. It was not quite the same at Malplaquet (1711). 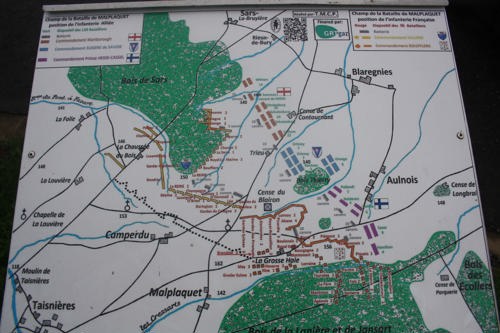 This modern guide to the battlefield shows the initial disposition of the armies.
(Author Collection)

Faced with an entrenched enemy covering a gap between two woods, Marlborough had few options so he decided to try to break through the woods on his right (Bois de Sars). Hopefully the attack through the Bois de Sars would cause the French to reinforce their left, leaving a weakened centre vulnerable to attack. To be certain of this, Marlborough ordered the Dutch to attack the strong French right wing to pin it in place.

All the French positions were fortified with entrenchments and abatis. In the centre, they had constructed a series of redans with gaps between them to allow cavalry counter-attacks. Artillery would be critical if the allied infantry were to have any chance of breaking through.

In the early 18th century, artillery was very much a subsidiary arm. Usual practice was to spread guns out in front of the foot and horse to conduct a preliminary bombardment. At Malplaquet both sides used massed batteries at critical points.

To support the attack into the Bois de Sars, Marlborough amassed a huge 40 gun battery that concentrated fire on a single point which was to be attacked by Imperialists from the north, and Prussians and British from the east. Elsewhere Marlborough combined guns and howitzers in 10-20 gun batteries to inflict maximum damage on key enemy positions.

Under the command of the enlightened Seigneur de Saint-Hilaire, the French guns were also combined into massed batteries rather than being deployed piecemeal across the front. One of these 20 gun batteries was hidden in a reentrant created in the entrenchments on the French right. From this position the battery was able to inflict devastating enfilade fire on any attackers. 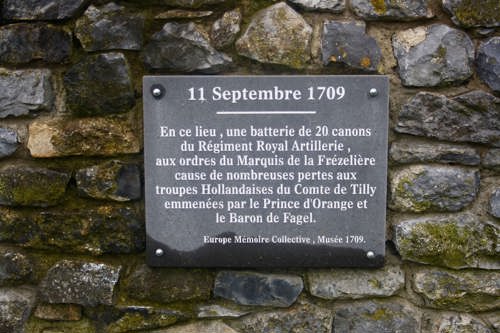 A battlefield monument at the place where the French enfilade battery was positioned.
(Author Collection)

Marlborough’s plan worked. Supported by the 40 gun battery, more than 60 Austrian, German, Danish and British battalions converged on the Bois de Sars from two directions. The woods were defended by 21 French battalions. They put up a stiff defence and, as a result, it took the allies four hours to clear the woods.

Faced with the imminent collapse of his left flank, the French Marshal Villars drew troops from the redans in the centre to counter-attack the allies in the Bois de Sars. This left the French centre wide open.  Villars was not able to move troops from his very strong right because they had come under a series of ferocious Dutch attacks.

The Dutch attack was intended to pin the French right and this they most certainly did. Attacking with 30 battalions against twice as many entrenched French infantry, the Dutch pressed home their attacks with such ferocity that on several occasions they breached the French entrenchments. As the Dutch reached the French entrenchments their ranks were blown apart by enfilade fire from the hidden 20 gun battery. Many units suffered more than 50% casualties. 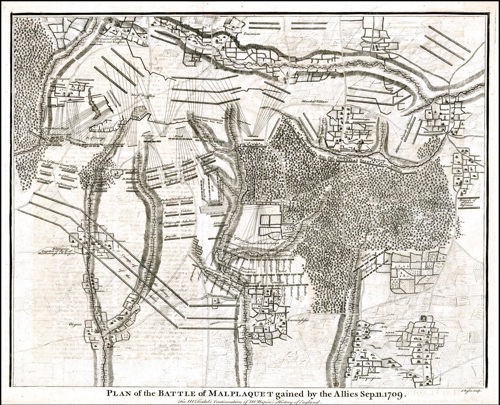 A near contemporary print depicting the battlefield and army deployments.
(Rijksmuseum Amsterdam)

A bit before noon, Imperial hussars reported that the French infantry had abandoned all the redans in the centre to reinforce their left., Marlborough therefore ordered an attack on the enemy centre. British and Hanoverian foot advanced to occupy the enemy redans and then more than 130 squadrons of Dutch, British and German cavalry attacked through the gaps between them. A similar number of French cavalry counter-attacked. The French initially got the best of the engagement, only to be driven back by fire from the allied battalions occupying the redans.

At this critical moment, Villars was seriously wounded while organizing a counter-attack on the Imperialists in the Bois de Sars. This stopped the counter-attack dead in its tracks. Individual brigadiers began to pull their men back from the French left as command fell to Marshal Boufflers who was leading the cavalry action in the centre.

By 2 pm the cavalry battle had ground to a standstill. The French horse had the better of it but they could make no headway while the allied foot occupied the redans. The allies were masters of the Bois de Sars and, although they had not debouched from the woods, they had recovered their order and vastly outnumbered the French on that wing. Boufflers realized that he could not hope to hold the field of battle and therefore ordered the French army to retire from the field despite the fact that they had suffered far fewer casualties than the allies. 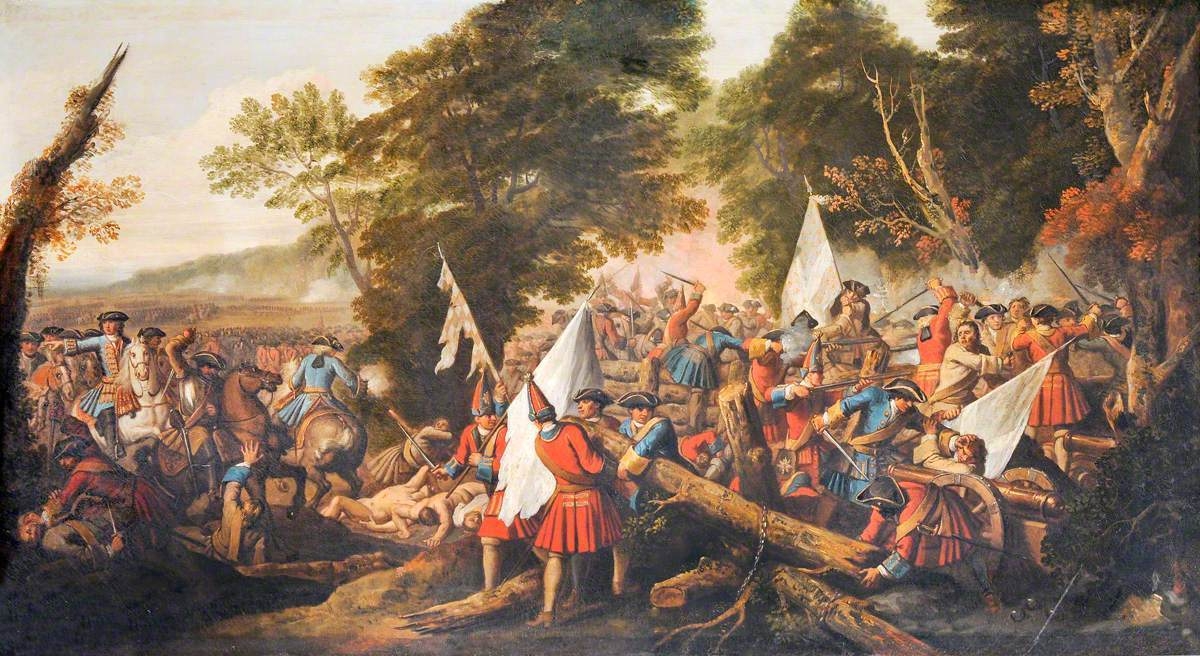 The French left the field in good order. The allies were in no position to pursue. They had suffered horrendous casualties and the French were able to conduct an organized retirement, covered by their substantial reserves of horse.

So who won the battle?

The French lost fewer men and had achieved their strategic aim — preventing an invasion of France. Although they had quit the field, their army was still in good order.  The slaughter of allied troops caused the Dutch, British and Imperial courts to begin to desperately seek a way out of the costly conflict. The Battle of Malplaquet changed the course of the war. It led indirectly to Marlborough’s eventual dismissal and peace settlements in 1713 and 1714 that were far more favourable to the French than they would have been had it not been for the slaughter at Malplaquet. 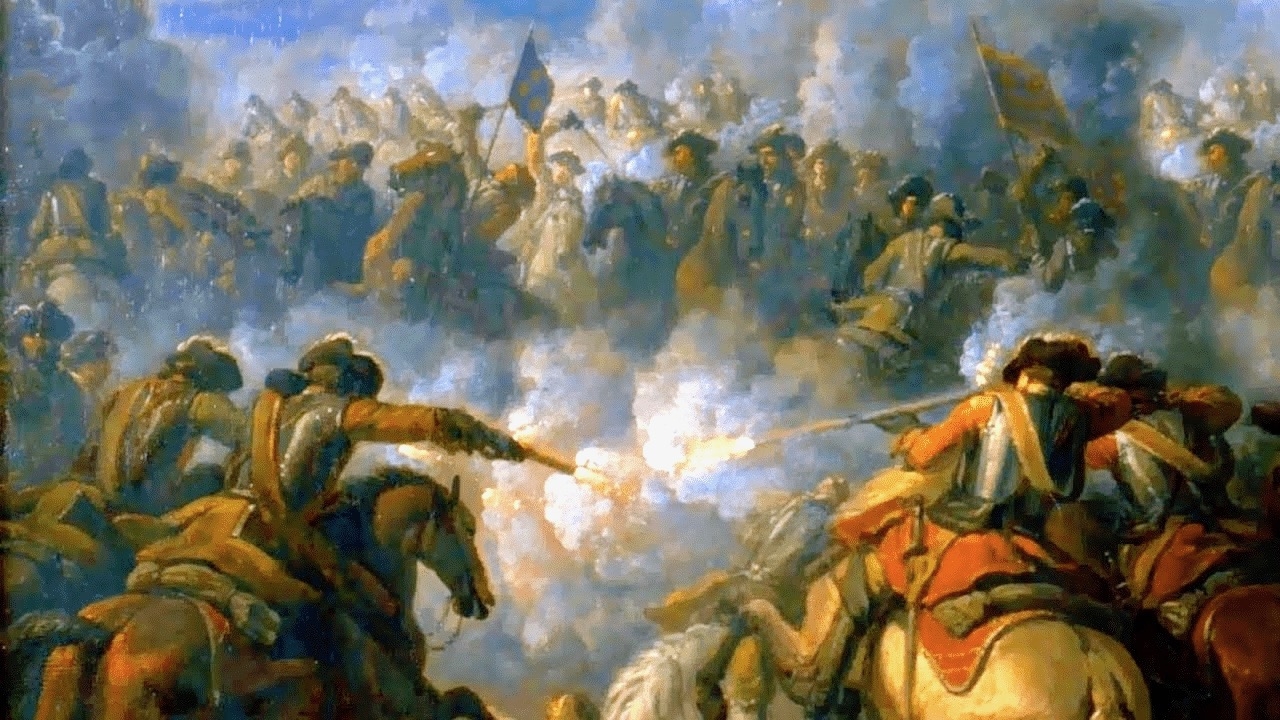 A furious cavalry action in the centre ground to a stalemate as neither side could make headway against the other.
(Author Collection)

Malplaquet 1709 publishes is out now. Order your copy from the website now!