In May 1940, German troops advanced through Holland, Belgium and France with astonishing speed, forcing the British Expeditionary Force and the French army to retreat to the north-east coast of France. The evacuation plan – Operation Dynamo – was put into effect with the expectation that only about 45,000 men might be rescued. However, by the hasty assembly of a vast armada of disparate vessels (thought to be in the region of 900, of which about 700 were privately owned), 338,226 Allied troops were brought safely back to England. Without the contribution of those Dunkirk Little Ships, as they have come to be known, thousands of British troops would have died on the shores of France. In today's blog post, Philip Weir, author of the upcoming Shire title Dunkirk and the Little Ships explores the lead up to this event and gives a brief overview of some of the vessels involved. 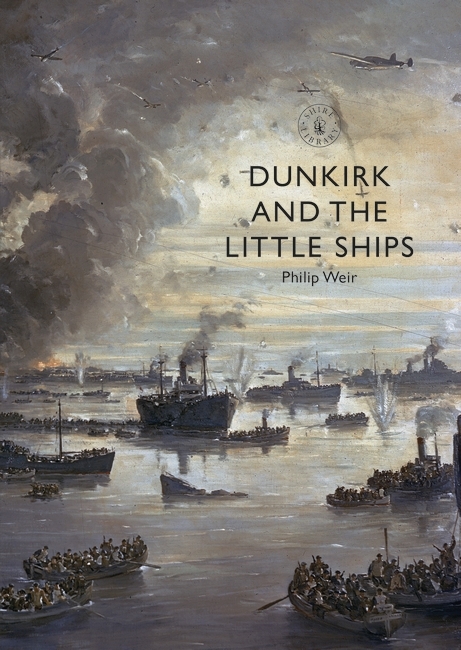 At 1857 hours on 26 May 1940, in the tunnels deep beneath Dover Castle, a simple, five-word message was received: ‘Operation Dynamo is to commence’. It was the signal to begin something that the British had been fearing would become necessary since the 18th: the evacuation of British forces from continental Europe.

The challenge facing the Royal Navy’s Vice Admiral Bertram Ramsay was colossal. As Flag Officer Commanding Dover, he had begun planning on the 19th, immediately after being told that he would be in command of any evacuation. Some measure of evacuation actually began almost immediately, with the Royal Air Force and some supply and other troops (British, Dutch and French) beginning to depart from the 20th, but when the order was given, there remained more than a third of a million British and French troops, and another 600,000 Belgians, trapped after German forces had raced through the lightly defended Ardennes forests to reach the Channel coast near Calais.

What followed would be described by British Prime Minister Winston Churchill as ‘a miracle of deliverance’. Assuming a two-to-three-day window before weather or enemy action brought things to a halt, Ramsay’s forces began their work. Starting with the Royal Navy destroyers and the 30 or so troopships of the Merchant Navy that were already at his disposal to support the BEF, and taking into account the damage to the port of Dunkirk, and the loss of alternatives at Calais and Ostend, which would force them into the slow process of using their lifeboats to ferry men from the beaches to the ships, it was calculated that just 45,000 could be rescued. In the end, the weather and the defences held for fully nine days. Combined with the ability to use an undamaged breakwater at the port itself, known as the East Mole, and an incredible scramble for anything that floated in the ports of southern England, from Admirals’ barges and prototype landing craft, to commercial river cruisers and the yachts of the rich and famous (and the not-so-rich-and-famous), this allowed them to rescue no fewer than 338,226 Allied troops from the Dunkirk pocket. It was truly one of the most remarkable feats in history.

The stories contained within this incredible event were, of course, remarkable in themselves. There were tragic losses to enemy action: for example ‘the little holiday steamers’ such as the paddle-steamer Gracie Fields, pressed into service as a minesweeper and bombed and sunk off the Dunkirk beaches, whose ‘excursion to hell’ would be immortalised by the broadcaster J.B. Priestly; and the French destroyer Bourrasque, forced into an Allied minefield by German artillery while packed with evacuees and sunk (a photograph of which became one of the most recognisable scenes of Operation Dynamo). There were mistakes too, from ‘friendly fire’ incidents, through collisions, to simple mix-ups and miscommunications that left thousands stranded on the beaches and in the port for far longer than they otherwise might have been. For all of its incredible and unexpected success, Churchill’s ‘miracle’ was by no means immaculate.

Yet a success it was, and the contributions were many and varied. Despite appearances to those on the ground and aboard the ships, pilots and aircrew of the Royal Air Force and Royal Navy, from across the British Empire, strained every sinew to protect and support the evacuation from the air, among them future ‘aces’ who would become household names, getting their first taste of combat. Naval crews from the British Empire, France, Belgium and Poland, alongside civilian merchant navy crews from all of those and more, sailed the bigger destroyers and troopships to and fro, collecting troops by the thousand from beaches and harbour, under threat of mine, bomb, torpedo and artillery shell. The troops themselves were no mere bystanders either, having managed to make it to Dunkirk in the first place, many – particularly, but not exclusively the French – would fight in the defence of the perimeter, while others used their ingenuity to create things like miniature piers out of surplus lorries to aid their own escape.

At the heart of it all, and particularly the heart of the way Dunkirk is remembered are the ‘Little Ships’; the small, largely civilian-owned yachts, river cruisers, barges, fishing boats and lifeboats, and a hundred other types of vessel, gathered together to collect men from the beaches. These are seemingly embodied in the extraordinary figure of Charles Lightoller, senior surviving officer from the Titanic and a First World War destroyer captain, who, in his retirement, sailed his own yacht, Sundowner, into the maelstrom, along with his son Roger, and a Sea Scout called Gerald Ashcroft.

Then, at dawn on 4 June, it was over. At 0340 hours, some ten minutes after the Germans had begun their morning artillery bombardment, the destroyer HMS Shikari, with French General Robert Barthelemy and 383 of his men, sailed from Dunkirk; the last of 26,175 to be evacuated that day. Operation Dynamo was done, though even as Shikari was making that last exit from Dunkirk harbour, 1,000 miles to the north a group of six big troop ships and the repair ship HMS Vindictive were pulling into Harstad in Norway. Evacuations from that country and from France too, in which around another 140,000 British troops still lay, would continue through the days and weeks ahead, until the last of the Polish Army was brought out of the port of St-Jean-de-Luz on 25 June, fully three days after France and Germany signed an armistice.

The Dunkirk story, and particularly the ‘Little Ships’ has since passed into legend. But, although his was not an exclusive story, and despite the fame and subsequent depictions in fiction of stories remarkably like his, Lightoller’s story, and the stories of those like him (there were others who did the same) that perhaps form the core of the popular image of the operation, was not necessarily illustrative of the whole. The majority of the ‘Little Ships’ were, of course, requisitioned and towed to Chatham, where they received naval crews, which then made the trip to Dunkirk itself. Nonetheless, the image conveyed of a country going to help its army was extraordinarily powerful and stuck, aided by the survival of so many of these small vessels into the present day, and the existence of the Association of Dunkirk Little Ships. The Association was formed in 1966 by the owners of vessels that had taken part, and dedicated to their preservation, returning in number to Dunkirk every five years on the anniversary of the evacuation itself. These ‘Little Ships’, along with a number of museums and memorials, of course, form a key physical, material link to the crucial events of 1940, the importance of which will only increase as the events themselves pass from living memory. Their continued existence should help to inspire future generations to learn more about not only their remarkable story, but the greater events in which they played their part.