Today on the blog we are joined by Robin David, designer of Letterpress: A Clever Game of Words, as he talks about his background, design process, and his new word game. 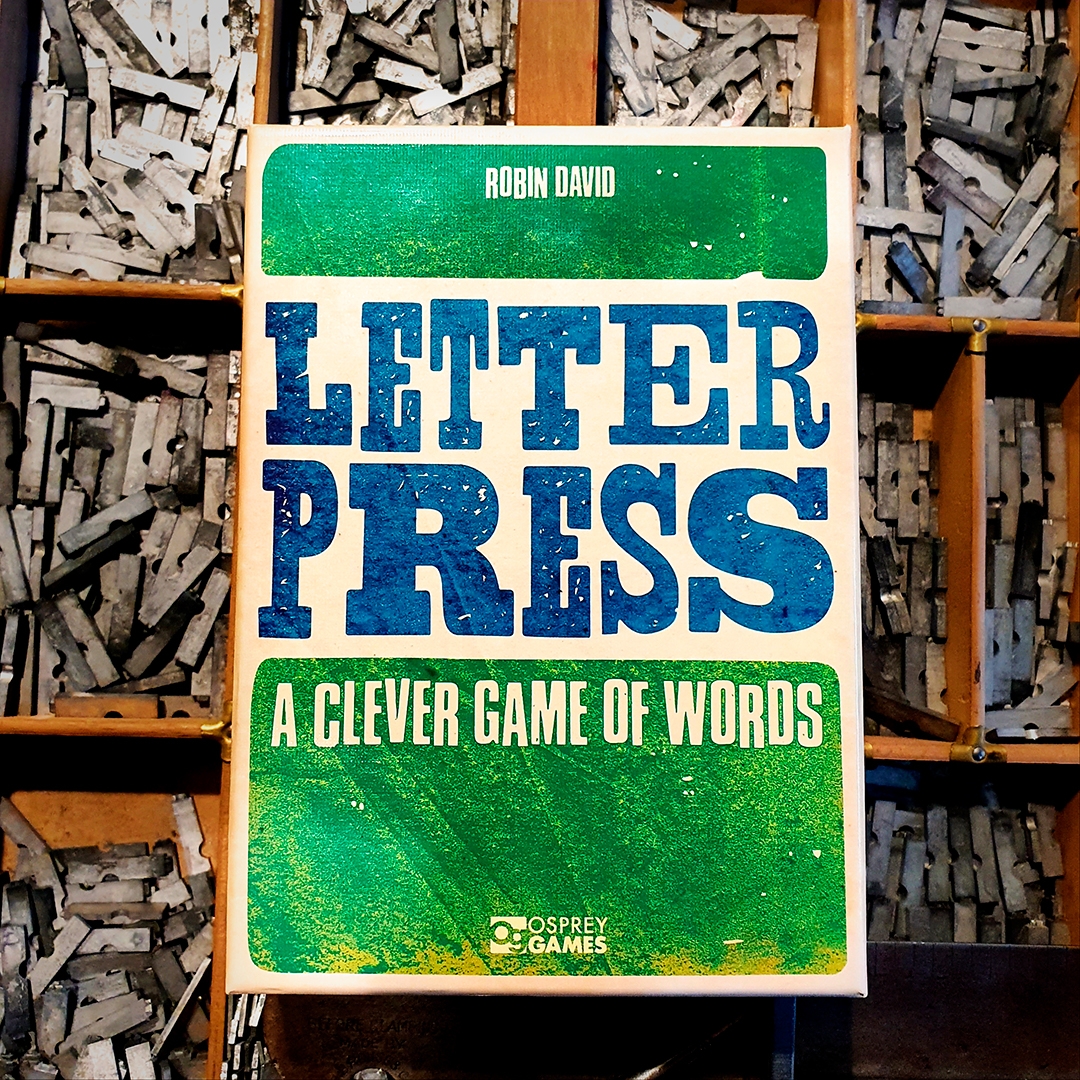 So, first off, tell us a bit about your background and what got you into gaming?

I'm a teacher and a writer, now based in rural Ireland, whose been making games and talking about games for a long while. Around 8 years ago, I was living and working in Singapore and I started attending these boardgame meetups - it was just as a way to get out of the house and meet new people. I'd enjoyed games like Monopoly and Scrabble in the past, so figured these meetups might be fun. Was I in for a surprise! Cue discovering the enormous and exciting world of modern boardgames! I've been boardgaming regularly ever since - mostly playing a lot of Euro-style games and some wargames.

When did you start designing games?

I started noodling around with game design ideas quite soon after getting into the hobby of playing them - I've always been the kind of person who likes to make things and game design seemed like a great outlet for that urge. Over the years, I've produced loads of print-and-play games and game experiments. Most don't lead anywhere, but I feel like I've gotten pretty handy at the process now!

Tell us a bit more about Letterpress and why you think people should bring it to their next Game Night!

Letterpress is a word game which tries to do things a little bit differently. I love word games and I wanted to make a word game that had less down-time for players (less waiting between your turns) and could be won through tactical play rather than just by having the biggest vocabulary. So to achieve both of those things, I designed the game to use a variety of different types of card drafting - that is, phases where players get to pick the cards (letters) that they are going to play with in the current round. If you draft well and deny your opponents the best letters, you can win a round without having memorised the dictionary! What's more, much of the drafting is done by all players simultaneously, so it's almost always your turn!

I really like trying to make games with unique and unusual twists on them and you'll see that in how the scoring in Letterpress is done. Rather than just awarding points to players for words, players instead get to collect letter cards into their score piles. The winner at the end of the game is the player who can then take their score pile and then play the best word from it. So you're never hopelessly out or so far behind - if you collect the right cards at the right times you can still take home the win! I found that having this twist makes the game feel quite different from a lot of other word games and it's made it a hit with gamers and non-gamers alike. 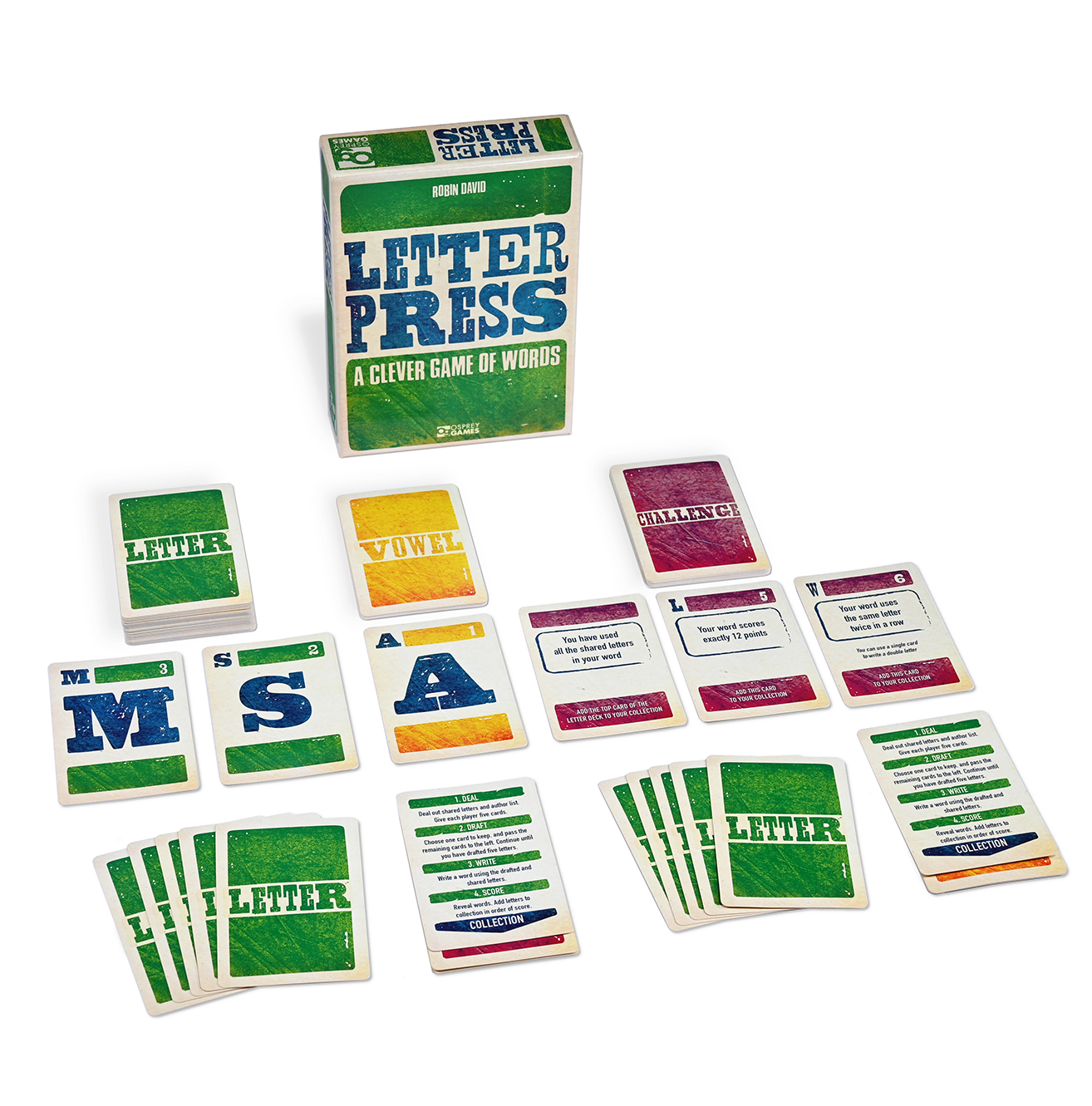 What was the toughest challenge you faced when designing Letterpress, and how did you get past it?

If I'm perfectly honest, the design of Letterpress was quite painless! The idea for drafting letter cards just came to me and immediately worked well. The biggest amount of design time was taken up by balancing letter scores and, more importantly, how many letters players can put into their score pile for winning a round. It will feel really obvious and natural when you play, but getting to that point took a lot of iterations!

What advice would you give to anyone interested in designing their own games?

Just go for it - make something! And making a game will teach you what works and what doesn't work. It doesn't have to look nice or be fancy.

For that first prototype, always make the simplest game that you can. You can add complexity later, if you want, but the core mechanics need to be really well oiled if the game is going to be any fun at all. And similarly, get your super-simple version prototyped and playtested as quickly as possible. If you have a clunker, you want to find out as quickly as possible and stop wasting time on it. And if you have something that works well, you can find out what direction it needs to move in, in order to find the fun. By way of illustration, the first version of Letterpress was made with scraps of paper, only had the bones for a single round, and didn't have a victory condition! My friends played it and said it was fun, so I continued to work on it.