Patrick Todoroff is back on the blog looking at creating your crew in Zona Alfa: Salvage and Survival in the Exclusion Zone. You can read more on his blog.

After a pair of near- disastrous jobs, Yuri Bonyev, the Exclusion Zone’s premier tour guide, decided to shift his operation from a one-man outfit to a full blown salvage and security crew. For all its danger, the Zone is a busy place: Scientists, Corporations, Traders, PMCs, Criminals, Cultists, Loners… So many conflicting agendas, there’s always a market for professionals with negotiable ethics and itchy trigger fingers.

“Grab a bottle and let’s talk.

I hear a lot of whining these days about ‘Safe Spaces’. What is that? What does that mean? No punches, no insults, no ruffled feathers? Bah. That’s not Life and that certainly isn’t the Exclusion Zone.

Don’t get me wrong – the Zone doesn’t discriminate; anyone is welcome to try their hand here. That doesn’t mean they’ll be successful. Most likely, they’ll die a nasty death in a remote location and their bones will go back to the black soil. But young, old, educated, street smart, rich, poor, male, female, whatever, can come and carve out out a place here.

There are three levels of combatant in ZONA ALFA: Green, Hardened, and Veteran. Each has a corresponding capacity to act in the game. Green troopers can perform one action when activated. Hardened can perform two, and Veterans can do three.

Zone crews are built on what’s termed khrabrost‘, (courage or mettle) which is nothing more than the total number of Actions per Turn available in a particular group. The “K-Value” for a starting crew is 12, which – after the Leader is set – can be spread (or spent) among the remaining members any way you see fit. 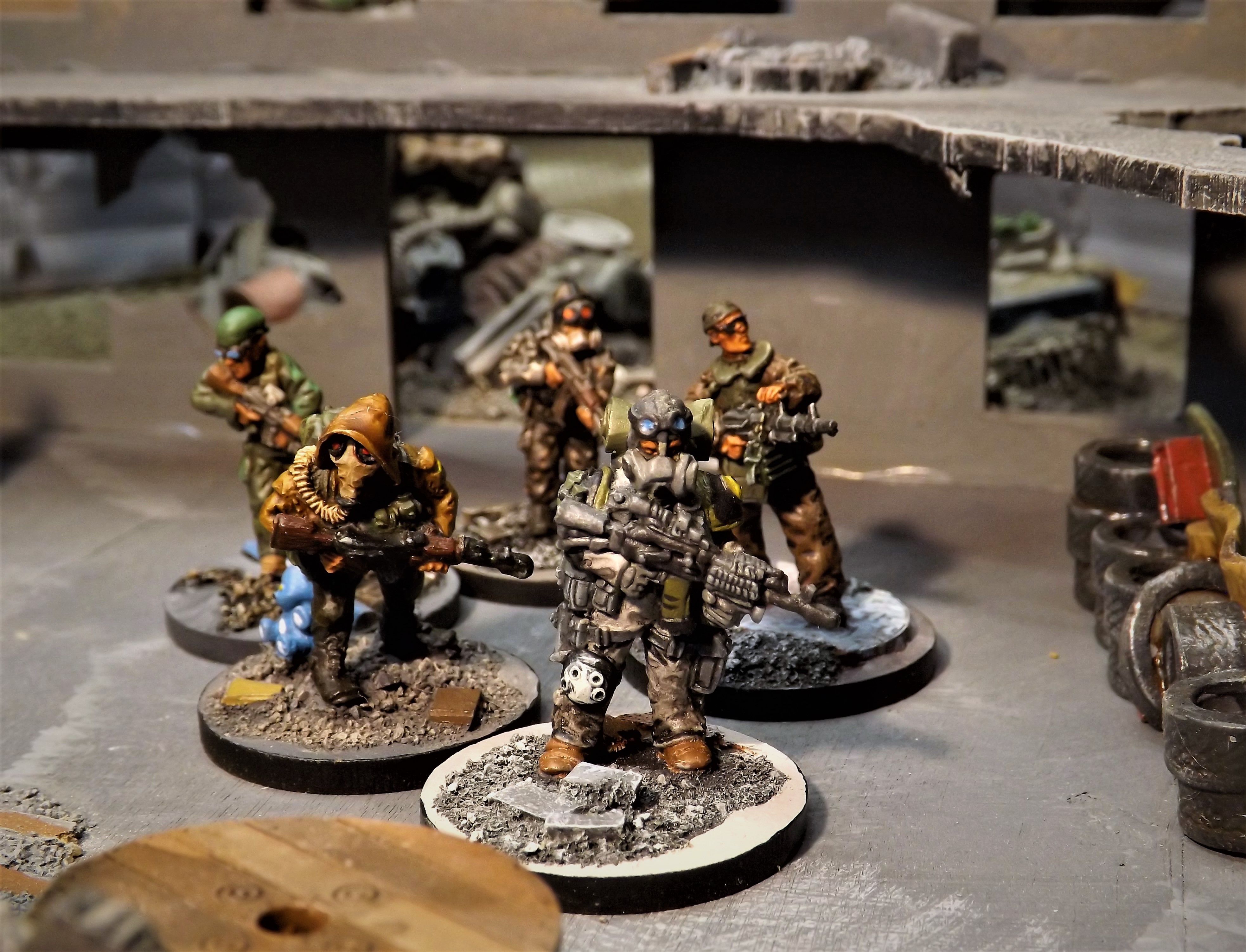 Yuri could have gone with a small crew of four Veterans, or a large Noob Mob of nine, wet-behind-the-ears, Green recruits. But he decided a mix of troop qualities was best, leaning toward more experienced fighters.

Troop Quality also confers different skills, and the ability to carry and use gear. Green recruits have no real skills and can only handle one piece of equipment. Hardened fighters have learned one skill and can deal with two pieces of special gear. Veterans have two skills and three pieces of equipment. So here’s the breakdown:

A Veteran, Yuri has both the LEADER and HARD abilities, meaning he can help his comrades rally in the face of fire and give orders, plus he’s not easily shaken in combat or stressful situations. For special gear, he’s got a Red Dot on his AK74, a set of NODs for low-light situations, and a Med-Kit in case his famous luck runs thin.

Anton is also a Veteran. As crew medic, he’s got BONE DOC and HUSTLE. (He can patch you up and get around quick) For gear, he loaded up on Med-Kits (Bone Docs can double up) and a Red Dot on his trusty old AK47.

Mikail, Boris, and Laslo have been around but not as long as Yuri or Anton. They are Hardened men, each with one skill and some extra gear.

Mikail is a SCROUNGER (can Search salvage locations twice) with Binoculars and a Med Kit. Boris carries an RPK, so while he moves slower, he can UNLOAD (full-auto madness). He also has a Med-Kit, plus a shot of E-Juice (vodka and amphetamine) for those moments when he needs a boost. Laslo had some sharpshooter training in the army, so he has STEADY HANDS, a Red Dot and a Med-Kit.

Yuri managed to acquire Mil-spec Body Armor while the rest of the crew has decent, civilian grade protection. All the guys have a pair of grenades, (1 HE, 1 Smoke) .

Of course you’ll be able to swap out gear between missions, hire new fighters, upgrade armor and weapons, even improve a model’s core stats. (providing they live long enough) There are more options, equipment, and details in the ZONA ALFA rule book, but this provides an overview of a typical starting crew.

Think you've got what it takes to survive in the Exclusion Zone? Preorder your copy of Zona Alfa today!