Patrick Todoroff is back on the blog with an AAR for Zona Alfa: Salvage and Survival in the Exclusion Zone, the latest addition to the Osprey Wargames series.

Remote, fortified, at the edge of the Luhansk Forest near a swamp, there was little attractive about it. Bugs, mud, vermin… not even decent salvage. Rumor was it had been cleaned out months ago. So why go? 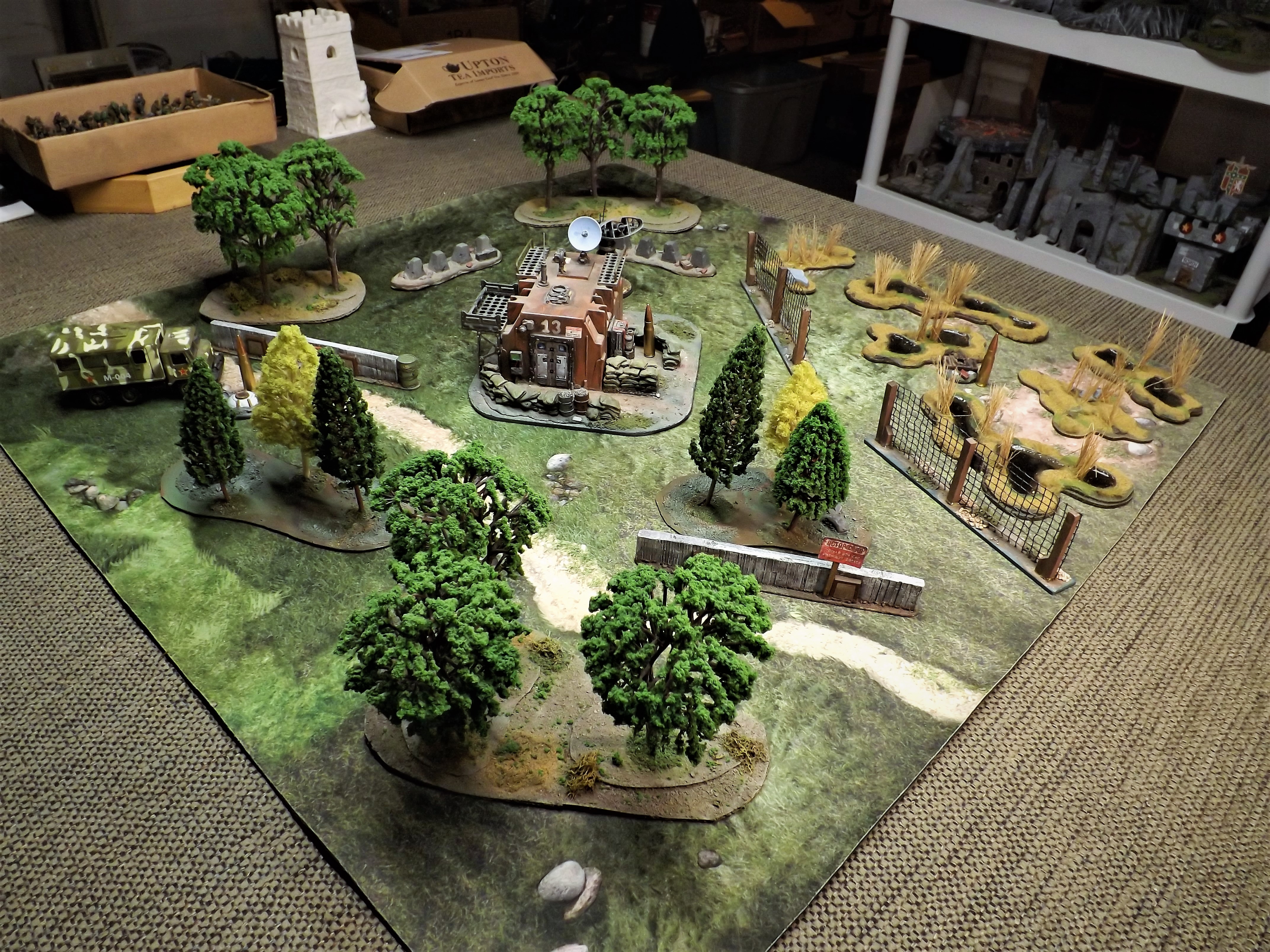 Well, the Ministry of Science posted a job, a call for any interested crew to go out there and repair its old satellite dish. Whatever their reason, the eggheads needed it online for a few hours and were offering cash to get it done.

So… there you were, tramping through the mud, swatting at clouds of mosquitoes, weaving your way through the undergrowth, headed to Luhansk Bunker.

A quick pick up game for a Saturday afternoon. 3' x 3' mission area, low threat level, and 9K per side. Tom picked a small Zone Enforcement (ZE) squad led by a local guide nicknamed ‘Moose’ while I went with a similar crew of Independents led by Danya Kravets, aka ‘Tailor’. Turn one and two saw both crews advancing rapidly, jockeying for position. Ranged combat is deadly so the men opted (wisely) to stick to cover. There was an exchange of fire near the swamp fence, but neither side was affected.

Tom made good use of his Sergeant’s ‘Leader’ ability, ordering his men to fan out and lay down covering fire while he moved straight for the generator on the outside of the bunker. 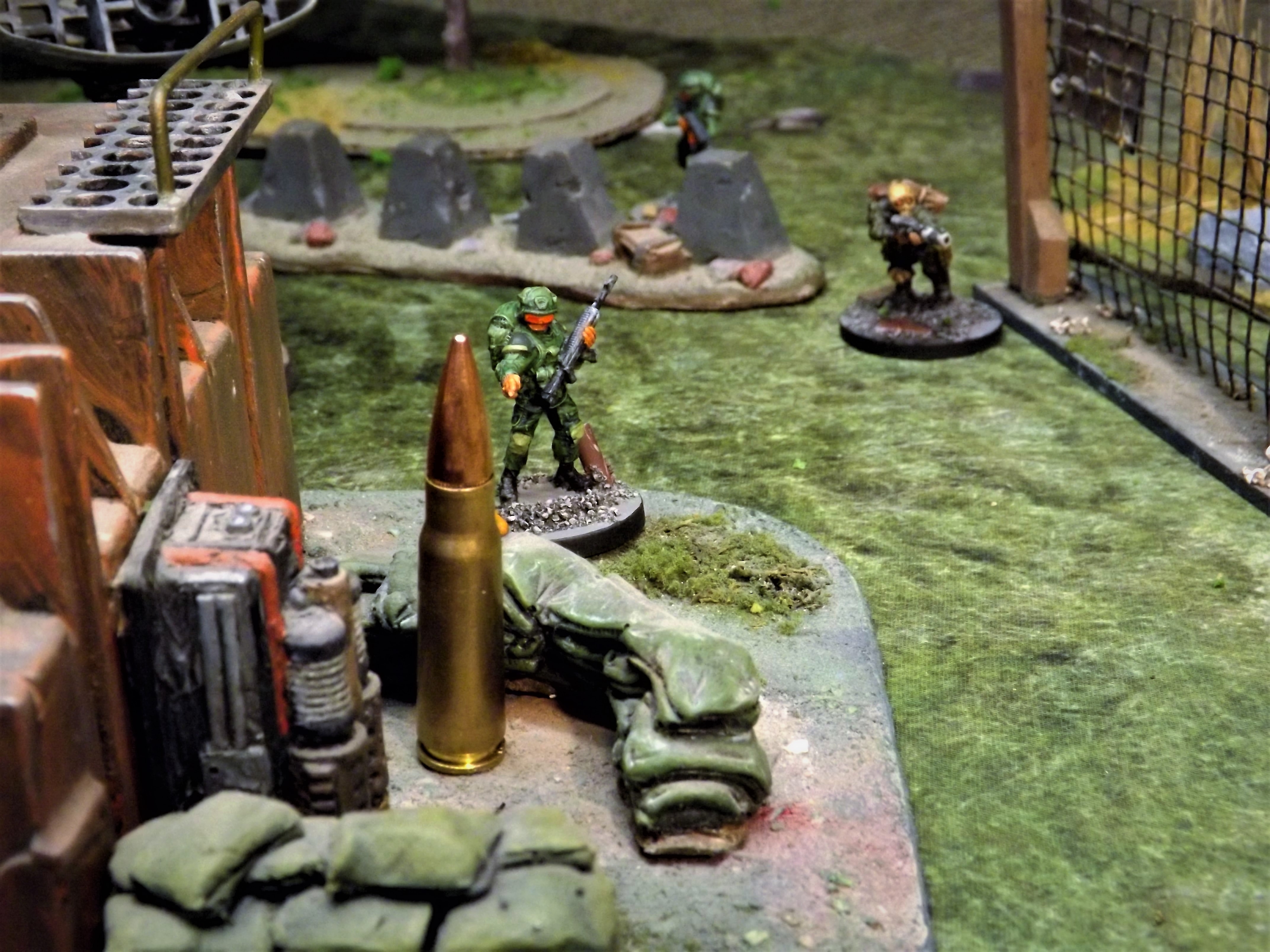 The fearless Hero of the Motherland bounded forward, jumped the sandbags, and fired up the generator. In doing so, he disturbed the Zone Hostiles – a bunch of Bandits who’d been (apparently) dozing in the shade of the far side of the bunker and were yet to be awakened by the sound of automatic weapons. (“AK fire is lullaby in Russia. Sweet dreams!” )

Tom triggered the Hostiles by entering the Mission Objective’s reaction radius. Fortunately for both of us, the D10 roll had the Bandits spawn on the other side of the bunker.

One of Danya’s boys and a ZE trooper take them out before they can do any harm. 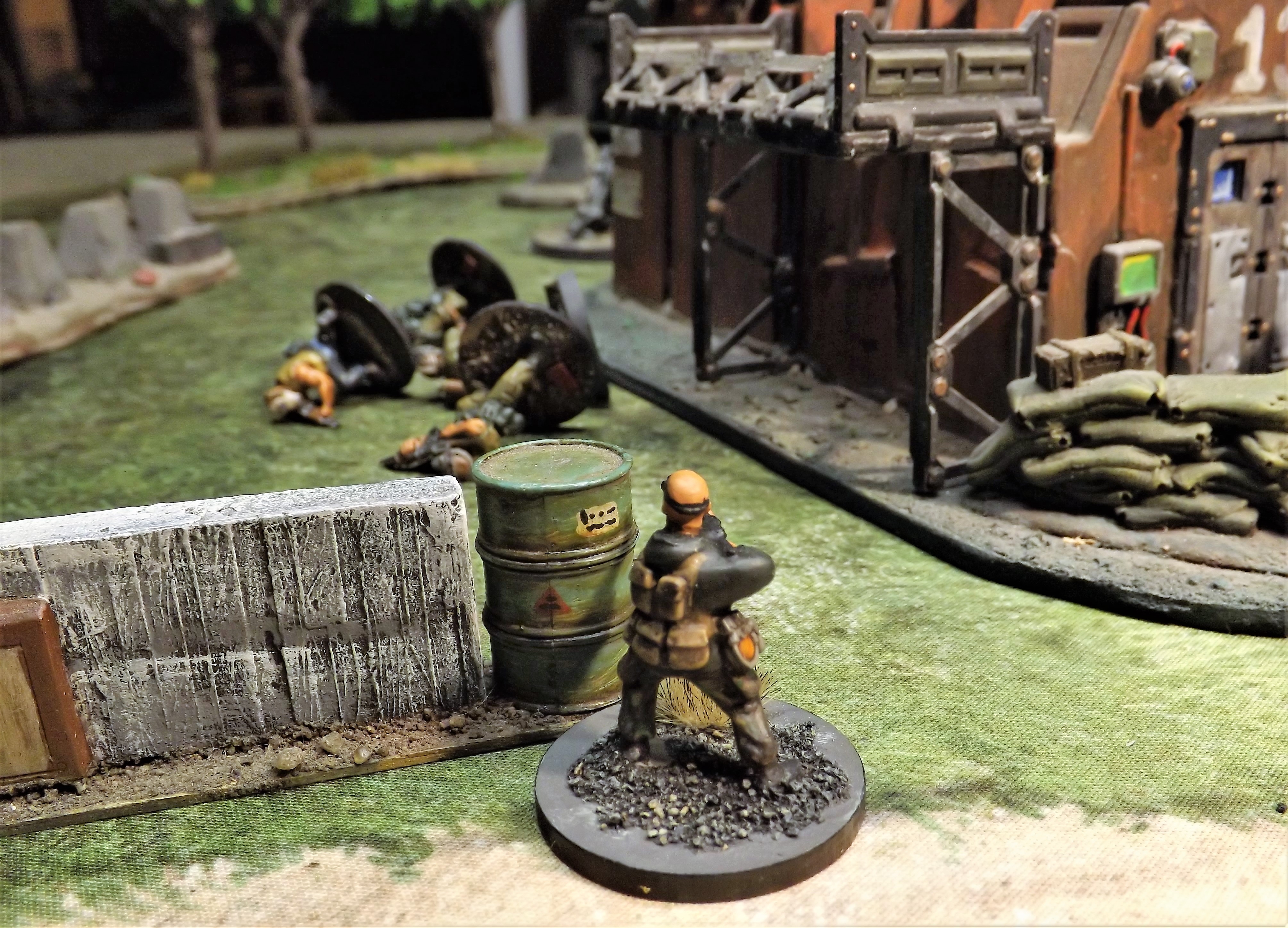 Angered that the ZE squad had taken the main objective so early in the game, another of Danya’s lads moves in to shoot the Sergeant. (Spite. Pure and simple spite)

More shots are traded along the swamp fence. Grenades are thrown. The local guide takes two in the chest and goes down. One of the soldiers avenges him by taking out the shooter from Danya’s crew (with multiple wounds, it wasn’t worth using the med-kits). In the meantime, Danya’s man pops around the front of the bunker and shoots at the Zone Enforcement Sergeant who was pulling back to cover. There were several misses but then he lobs one of his grenades. The Sergeant is wounded in the blast. Injured but not stunned, the Sergeant returns fire and puts another of Danya’s men down. Ouch.

Leaders have two wounds. They can still function at reduced capacity. Tom wanted to save the Med-Kit until he was safely in cover

The wounded men aren’t necessarily dead. If this were a campaign, they would roll for Battle Scars after the mission to see what, if any, lasting trauma occurred.

On the other side of the bunker, a Zone Enforcement trooper shoots at Danya’s other man. (he was all proud for taking down two bandits) Despite the cover of a low concrete wall, the Independent stalker suffers a wound. He opts to use his one med kit and trade the wound for two pinned counters. He’s hunkered down, bandaging himself when Danya sidles up.

Casualties on their right, turn limit counting down, Danya and his remaining man recover, then shift left toward the Hot Spot near the truck (Gotta salvage something out of this, eh?) They trigger it , spawning more Bandits, this time just on the other side of the truck. 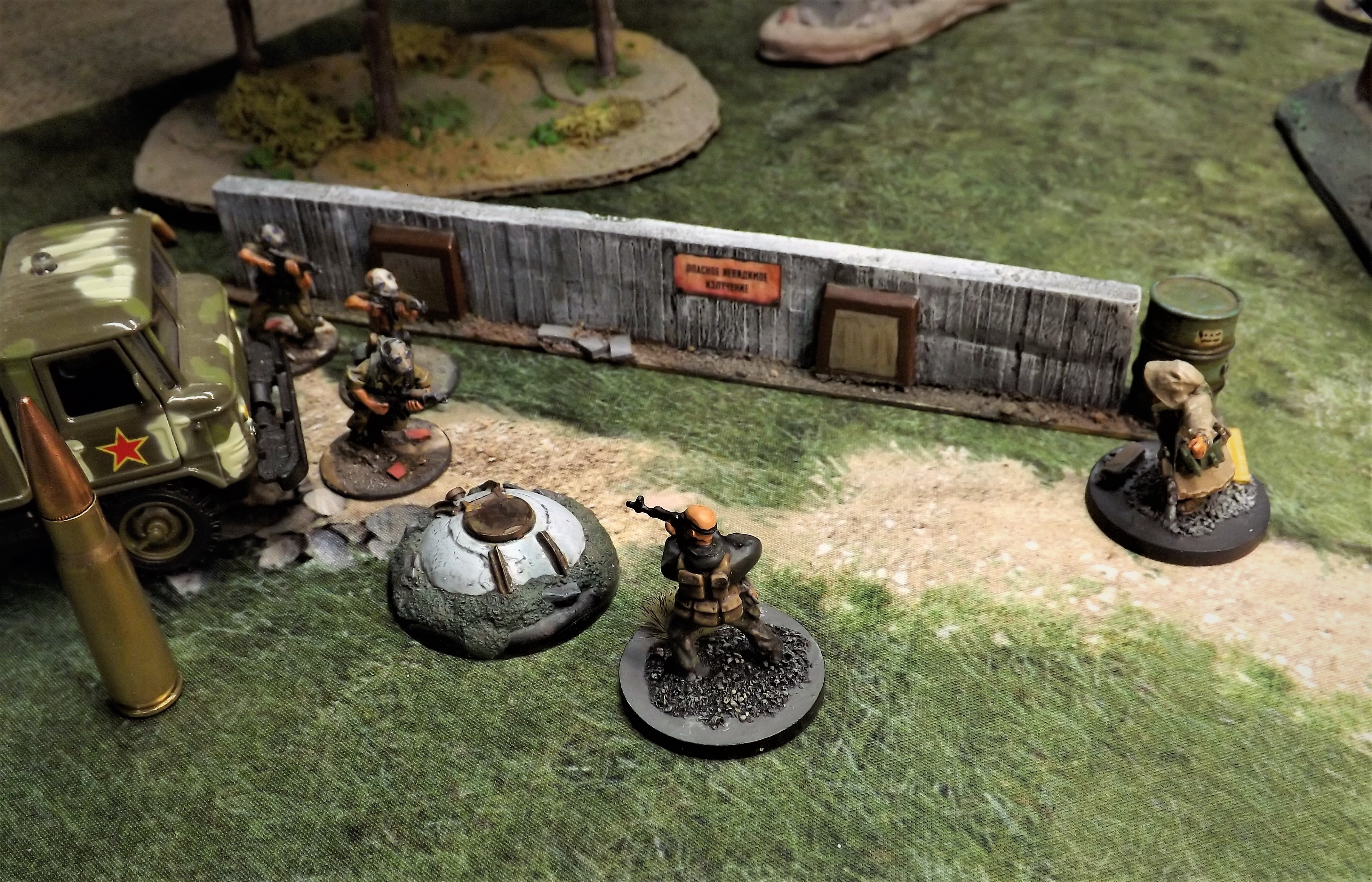 A nasty exchange of gunfire and these new bandits go down.

Hankering after than last bit of salvage, one of Tom’s troopers enters the swamp. He bears down on the cache and Rodents of Unusual Size (ROUS) swarm out of the tall grass. A quick spray of the old AK, and they’re dispatched. Tom clears another area. Quick, non-campaign, one-shot mission with a low K count. Tom carried the day with good dice rolls, aggressive tactics, and judicious use of the Leader skill. If these had been permanent crews in a campaign, or a higher threat level with more dangerous enemies, we would have been far more cautious. Perhaps even cooperated and split the loot.

That’s it for now. Zona Alfa: Salvage and Survival in the Exclusion Zone will be out at the end of the month. I’m looking forward to reading other people’s AARs.