On the blog today, Mark Stille, author of the upcoming Duel title, British Battleship vs Italian Battleship, looks at some of the key battles mentioned in the book. 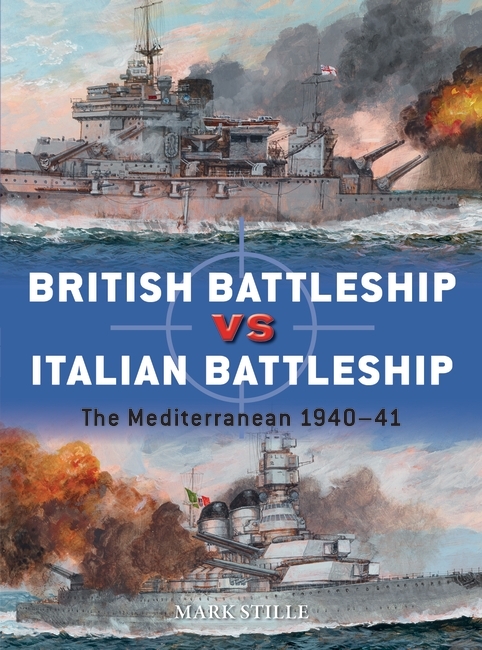 There are many misconceptions regarding the naval war in the Mediterranean fought between Great Britain’s Royal Navy (RN) and Italy’s Regia Marina (RM).  Most of these stemmed from British efforts to paint the RM as cowardly and inept during the war; this theme continued in a series of memoirs and histories published after the war.  This was also due in part because the British concept of seapower employed during the naval war in the Mediterranean did not apply to the Italians.  The RN sought a decisive engagement against the Italians and the commander of the Mediterranean Fleet, Vice Admiral Andrew Browne Cunningham, aggressively pursued such an action.  The Italians also sought a battle fleet engagement with the RN, but for a variety of reasons, none of which had to do with a lack of fighting spirit, had no desire to seek a decisive result in a clash between battle fleets.  In fact, the RM’s strategy of maintaining a fleet in being to underwrite its control of theCentral Mediterranean proved successful for the period that the Italians were engaged in the conflict.  The RM was able to supply Axis forces in North Africa from June 1940 until May 1943 and was able to close the Mediterranean to Allied shipping until the Italian Armistice in September 1943.

The most surprising aspect of the naval war in the Mediterranean was the fact that British and Italian battleships directly fired on each other on only one occasion during the war.  This was in spite of the fact that both navies prescribed to the precept that the battleship and their big guns were the final arbiters of victory at sea.  The only clash between British and Italian battleships took place immediately after the war began.  The RN, led by Cunningham, sought the opportunity to use a convoy to Malta as bait to draw out the RM’s battle fleet.  What resulted was the battle of Calabria (Punta Stilo to the Italians) which was the largest battle fought in European waters during the war.  Both operational RM battleships were present, along with 16 cruisers and 36 destroyers.  Cunningham had the advantage in capital ships with three battleships and an aircraft carrier, but was outnumbered in other categories with only 5 cruisers and 16 destroyers.  The battle remains virtually unknown because it was short and indecisive.  The two fleets met on the late afternoon of 9 July 1940.  In a pattern that dictated the nature of every other fleet action during the Mediterranean naval war, the Italian commander laboured under restrictive rules of engagement.  This, and the RM’s preference to fight battles at long range, meant the two sides never got close enough to deliver serious blows.  In the only time during the war in which battleships from both sides engaged the other, the RN gained the advantage when battleship Warpsite scored a hit on Giulio Cesare at 26,000 yards – the longest hit ever recorded by a battleship.  Not knowing the degree of damage suffered by one of his two battleships, the Italian commander broke off the action.  The battle of Calabria resulted in no ships being sunk on either side, thus explaining its relative obscurity.

Most histories of the battle claimed it established a moral ascendancy for the RN over the RM.  If this was true, why did the Italian battle fleet sortie again on 31 August 1940 to engage Cunningham’s fleet and on 7 September to engage Force H operating from Gibraltar?  Even after the disastrous (for the RM) raid on Taranto on 11 November 1940 during which three Italian battleships (of the six present) were placed out of action, the Italians failed to understand that they should be cowed into inaction and only a few days later on 17 November their battle fleet sortied again to engage Force H.

Even though the battleships of both sides fought each other only once, battleships from both navies played a key role in every major naval engagement in 1940-41.  There are two more actions described in the book in which battleships from both sides were present but failed to engage each other directly.  The first was at the battle of Cape Spartivento on 27 November 1940 when the RM’s battle fleet with two battleships engaged Force H with one battleship, one battlecruiser and an aircraft carrier.  The action was fought at very long range and barely qualifies as a battleship duel.  Neither side lost a ship, but it clearly showed the RM’s determination to fight.

The final action described in detail in the book is the battle of cape Matapanfought on 28-29 March 1941.  This was an aggressive operation for the RM which did not end well for them.  Also in the book is a synopsis of the operations involving battleships for the remainder of 1941 and 1942.  Surprisingly, the mere presence of Italian battleships during key convoy battles during this period resulted in their largest successes of the war.  Readers can make their own conclusions, but the book describes an Italian Navy which was cautious at the strategic level, very aggressive at the operational level, and timid on the tactical level.  In any event, the record shows that the Italians were not afraid to fight and were not overwhelmed by the RN.

The ships themselves in this naval theatre were interesting.  Because the RN was compelled to keep its most modern battleships in the North Atlantic to keep watch over the German Navy’s few but powerful battleships, the backbone of the Mediterranean Fleet’s battle line was composed of Queen Elizabeth-class battleships dating from World War I.  These possessed a fine balance or protection, firepower and speed and proved able to take modernization between the wars.  All five ships in the class fought in the Mediterranean, and of these three were extensively modernized.  The RM’s battle line was unready for war when Mussolini opened hostilities in June 1940.  The only battleships available were the two units of the Conte di Cavour class.  These also dated from World War I and were much more extensively rebuilt than the units of the Queen Elizabeth class.  However, the result was not worth the investment for the RM.  The rebuilt ships compared poorly to the Queen Elizabeths in terms of protection and firepower.  But they were much faster than their British counterparts which allowed the Italians the tactical advantage of engaging or breaking off an action as they wished.  Later in 1940, two units of the Caio Duilio class also entered service, but these were also dubious investments of the resources required to rebuild them since they possessed capabilities similar to the Cavour class.  Not until the first two units of the Vittorio Veneto class entered service in late 1940 did the RM possess battleships able to stand up against the Queen Elizabeths.  The new RM battleships were designed under Washington Treaty restrictions (which the RM flouted) but were slightly superior in terms of firepower and protection to the Queen Elizabeth class.  In addition, they retained a significant speed advantage over the British ships.  Another factor which is often overlooked was the total ineffectiveness of Italian battleship gunnery.  The main batteries of Italian battleships failed to sink a single enemy ship during the war in spite of generally good fire-control systems.  The problem was excessive salvo dispersion caused by a number of issues including excessive barrel wear caused by high muzzle velocities, and excessive manufacturing tolerances on the guns and the shells they fired.

The naval war in the Mediterranean was fascinating and battleships were an important part of this history.  Hopefully, readers will find something new and enlightening in this book.