From the street fighting that heralded the German occupation to the Gestapo repression that followed, Rome – City in Terror: The Nazi Occupation 1943–44 is the gripping story of the German occupation of Rome from the Italian armistice in September 1943 until the Allied liberation of the city on 5 June 1944. In today's blog post, author Victor Failmezger gives a brief overview of Peter Tompkins, one of the characters in this fascinating title. 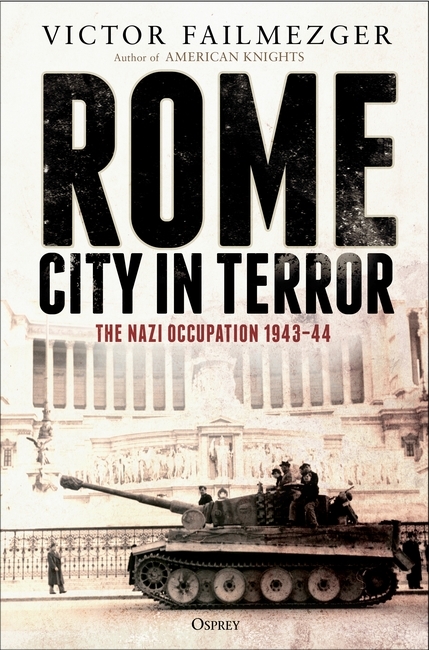 I believe that every author of history ends up with certain favorite characters. In my book Rome – City in Terror: The Nazi Occupation 1943–44, there are many, but one who stands out is a young 23-year-old man, Peter Tompkins. With tremendous courage and fortitude he set up a US spy network in Rome for the US Office of Strategic Services (OSS) under the very nose of the Gestapo. He relayed critical intelligence to the Allies as they struggled up the Italian Peninsula and he was highly successful at it.

Peter Tompkins was born in the United States but he was educated in Italy, Switzerland, France and England. He spent much of his school holidays in Rome, knew the city well and spoke the Florentine dialect, passing as a well-educated Italian.

In 1939, at age 20 and after studying at Harvard, Columbia, and the Sorbonne in Paris, he returned to Rome and worked as a war correspondent for the New York Herald Tribune. He broadcast on the war in Europe for the American Mutual Radio Network. After the Italian invasion of Greece he reported from the British lines. Eventually he found himself in North Africa working as a news editor for Allied Forces Headquarters in Algiers. It was there that he joined the OSS.

Tompkins landed with the first wave of Allied troops at Salerno on September 9, 1943. There he debriefed refugees and recruited and trained men to go behind the lines to report on German troop movements. After the capture of Naples on October 1, 1943, Tompkins moved there and was visited by General William “Wild Bill” Donovan (founder of the OSS) prior to the Allied landing at Anzio, 30 miles south of Rome. Donovan asked Tompkins to go to Rome to head the OSS effort. He was given the temporary rank of major and he travelled light: Italian clothes; secret radio ciphers and crystals; a Beretta 9-mm handgun; and, much to his later regret, a Minox miniature camera.

Tompkins left Naples on January 20, 1944 with no goodbyes. He flew in General Donovan’s converted B-25 Mitchell light bomber for an unescorted flight to Corsica, now in Allied hands. At the port of Bastia he embarked on a captured Italian Navy motor torpedo and made the trip to the Italian coast with other OSS agents.

Tompkins had not been expected but the 20,000 lire he put in a resistance driver’s hand ensured he was driven to Rome. The car was stopped at several Fascist roadblocks but was passed through with papers from the German Embassy. Just before dawn, Tompkins’ car entered Rome and made for the Spanish Steps. He was way too early to meet his contact.

Tompkins ended up in the new and fashionable Parioli quarter where he met a young Italian uniformed police lieutenant, Maurizio Giglio. Giglio arranged several meetings and Tompkins briefed the attendees about the imminent Allied landing. He explained that his mission was to disrupt German communications and avenues of retreat, and see that bridges, utilities, and other infrastructure were protected. During the meeting Tompkins received an urgent message from Anzio, pleading for intelligence about enemy troop movements. With the help of his new colleagues, 100 resistance men were sent to monitor German movements. By the end of day, Tompkins broadcasted a detailed report about Wehrmacht troop traffic heading south to the beachhead.

Maurizio Giglio, the OSS agent who had control of Radio Vittoria 2. (Tompkins-NARA)

Tompkins established his headquarters in the Palazzo Lovatelli, near the Palazzo Venezia.  In the sitting room a moveable panel hid a small trap door to a secret room where any sign of his presence could be hidden. Most of his equipment, files and weapons were hidden in the cellar.

Tompkins’s team noted details of every German vehicle that passed by: type, contents, insignia, troops, and guns being transported. Outside of the city, German concentrations, minefields, gun emplacements, gasoline dumps, and local fortifications were reported. Even children playing in the fields near Germans troops would tell their parents what they had seen.

It all paid off. On February 16, Tompkins reported that a major German offensive against the beachhead would occur within the next 24 hours. More than 230 freight cars with war materiel were observed: 50 troop transports; 100 cars loaded with horses; 11 Mark VI panzers; and six medium panzers. It was a major intelligence success. On another occasion he reported 28 freight cars full of munitions and more than 70 open railway cars carrying light panzers and armored cars. They were bombed and destroyed

On one occasion, Giglio rushed into the apartment, yelling, “It’s all over, I’ve been caught.” The new police chief of Rome had organized a raid at the Basilica of Saint Paul Outside the Walls and Giglio was caught taking pictures during the raid using Tompkins’s Minox miniature camera. The pictures had no intelligence value but drew attention to him. Eventually Giglio was arrested and murdered. 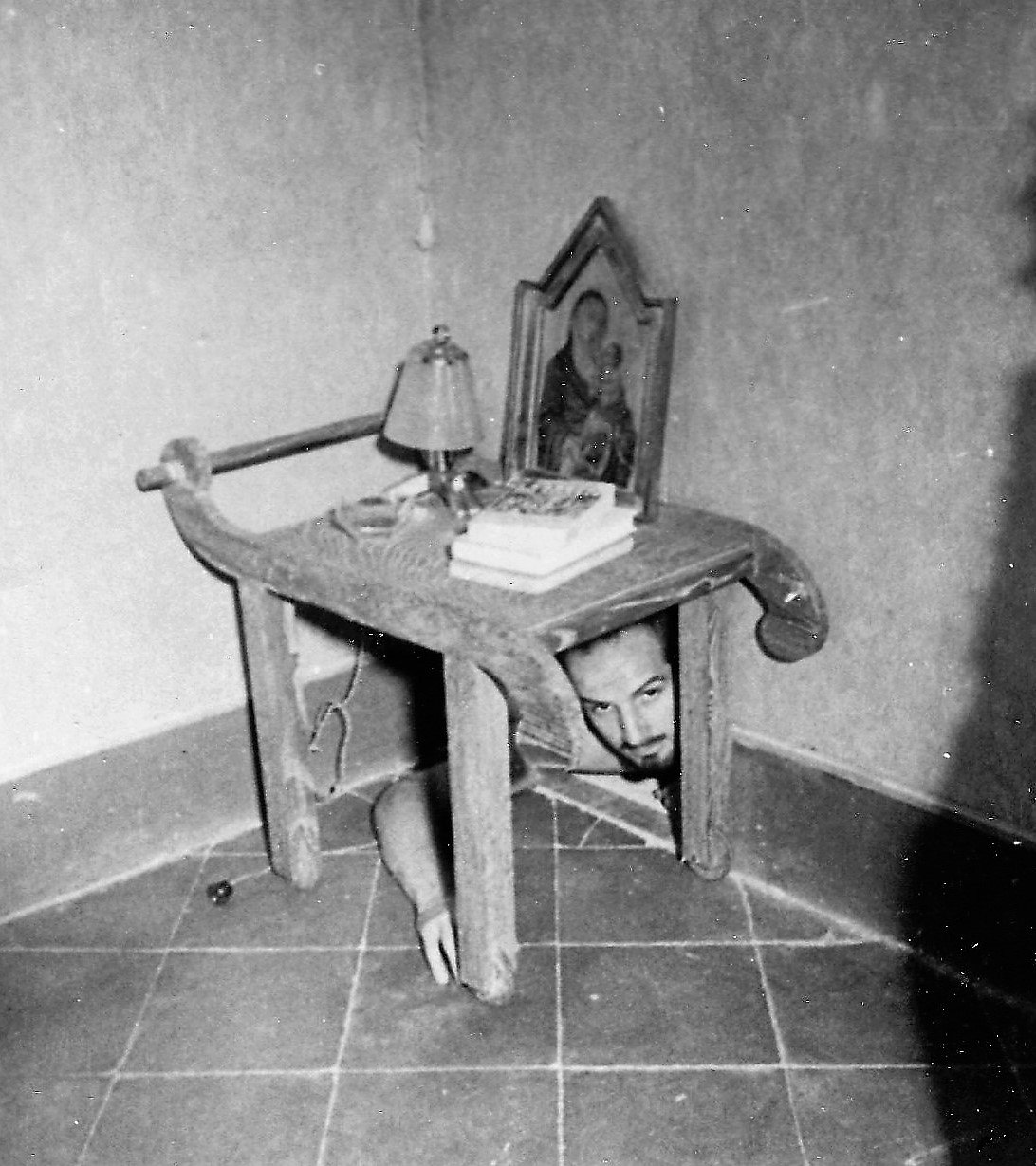 Tompkins peeking out from the tiny secret doorway to the secret room in Palazzo Lovatelli. (Tompkins-NARA)

Amid this crisis Tompkins moved to another flat. To lift his spirits, he organized a curfew party. Liquor was flowing, and, as the party livened up, the men called for more girls. A partygoer called a nearby friend, who asked if she could bring along her German companion, and Tompkins left the apartment to fetch them.

Arriving at the friend’s house, he was ushered into a large room where another party was in full swing. Tompkins quickly realized it was the home of an Italian film star, Laura Nucci. Laura, naked but covered in furs, was sprawled on a couch. An unidentified German SS captain held her hand.

Tompkins guided everyone back to his party where he made omelets for all. Afterwards the Nazi officer went back to fondling the actress and drinking huge amounts of brandy. At four in the morning the party broke up and the SS officer, clicking his heels, left, towing the actress behind him. It was close to noon when the partiers awoke and Tompkins was told that the Gestapo officer was SS-Hauptsturmführer Erich Priebke, the officer who had the job of uncovering and eliminating enemy agents like Tompkins.

With Giglio caught, Tompkins had no access to a radio and could no longer report to OSS headquarters. He needed to disappear and so enlisted in an Italian police unit. He was outfitted in an ill-fitting tropical-style uniform complete with pith helmet. During his days in the police he spent most of his time drinking wine at the outdoor canteen and doing perfunctory drills. Four days later, he was told to desert to escape discovery. Tompkins was frustrated with the mess in which he found himself and made an unsuccessful attempt to cross the lines. He was forced to return to Rome.

Just before the liberation of Rome on June 4, 1944, Tompkins issued official-looking orders (complete with an OSS rubber stamp) to the police and city authorities directing them to prevent sabotage to building and public utilities.

Later that year, Tompkins returned to Washington, DC and was in danger of being drafted but the OSS returned him to Europe. He wrote two books: A Spy in Rome and Italy Betrayed, the latter about the battle for Rome. In January 2007, Tompkins died in Shepardstown, West Virginia, USA.

Rome – City in Terror: The Nazi Occupation 1943–44 is on sale now. Order your copy from the website today.