The formidable European longsword remains one of the most impressive and distinctive edged weapons of the late medieval era. The longsword evolved from the war swords and great swords of the 14th century, and emerged as a battlefield weapon in the early stages of the Hundred Years' War. It went on to become a key weapon on the battlefields of late medieval Europe, creating a new system of sword fighting. On the blog today, author Neil Grant explores how his upcoming Weapon title, The Medieval Longsword, came to be. 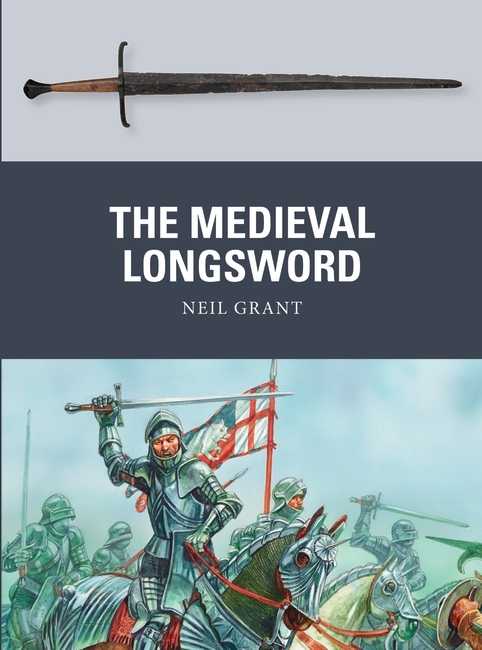 The sword has always had a special significance among weapons.  This may far outweigh how often it was actually used in combat – we still speak of towns being “put to the sword” whatever the actual weapons used were, and no amount of pointing out that polearms were probably more common and effective weapons is ever going to offset generations of watching sword-fights in movies and video games.

Writing an Osprey book for something like the longsword is rather different from writing one about a more conventional weapon.  Whereas something like a Bren Gun or the Luger was adopted on a known date, had a reasonably short, defined service life and was used by clearly defined military forces, none of those things are true of the Longsword.  Instead, we can only date the first longswords from their appearance in art, after which they appears in a variety of different forms for the next several centuries, and are used in a variety of different ways and contexts, not all of them strictly functional.  When I was planning the book, I therefore wanted to make sure it answered a number of questions.

The first was obviously to look at how designs changed through time. Partly, this was simply because longswords were never produced to standardised patterns, and each maker and user had their own preferences.   However, there were definite changes through time – notably with swords optimised for thrusting becoming more common than those optimised for cutting, and then a move back toward dual purpose designs  - which reflected changes in fighting style and armour.  Manuscript sources also show a number of unusual longsword designs optimised for fighting in armour, blunt for much of their length but with flared spearpoint tips and even secondary handguards on the shaft.

As part of this, I spent time with several modern swordsmiths looking at the metallurgy behind swords and physical processes of making a blade, and studied documentary sources to see how it was done in the middle ages.  Very often blades were by one craftsman, then hilted and finished locally for their final purchaser.  Perhaps unexpectedly, looking at guild records to  investigate the size of workshops also brought to light several female armourers.  These were presumably women who had gained guild membership through husbands or fathers, but were now trading in their own right.

The second question was to look at who could actually afford a sword, and when they could carry them.  Swords in the Viking age were expensive items that only wealthy warriors could afford, but by the time the longsword appeared in the thirteenth century, wills and sets of accounts show that while custom pieces for the nobility remained expensive, prices for simple “standard issue” weapons had dropped to the point where they were relatively affordable.

My favourite thing I came across here was a sort of “teach yourself courtly French” primer from 1396, which included an example dialogue where a baker's apprentice (fairly low on the social scale) explained to his master that he had hurt his hand at longsword practice with a friend, and could not work.

Of course, being able to afford a weapon doesn't necessarily mean you are allowed to walk around with it on your hip, and unlike the Tudor period when swords were an integral part of a gentleman's everyday dress, most medieval towns looked askance on people routinely going armed.  Travellers normally had to leave their weapons at their inn, and even citizens were generally forbidden from carrying weapons unless they were of knightly status.  This is an area where modern assumptions can easily trip one up, however – many of the German cities depended on citizen militias for defence, and craftsmen could actually be fined for NOT owning a sword, even if they were only supposed to carry it when on duty or going to practice.

The third question was about how effective such weapons were.  Medieval manuscripts often show rather graphic images of heads and limbs being severed, and while there is undoubtedly an element of artistic licence here, cutting tests with reproduction weapons show that while longswords were probably not “razor sharp” - or at least, not along their whole length – an impressive cut can be delivered by someone who has taken the time to learn good technique.  This is further supported by archaeological evidence from mass graves at several battlefields.

On the other hand, I can testify from personal experience that plate armour is hot, heavy and tiring to wear, and expensive to boot.  Medieval soldiers wouldn't have bothered to wear it unless it offered significant protection to offset these disadvantages, and experiment shows that it's very difficult to hurt someone in full plate with a sword cut.  As a result, separate fighting styles existed for use against armoured opponents, with the left hand holding the midpoint of the blade.  This allowed the sword to be used like a short polearm, attacking weak points in the armour such as the armpits and helmet visor.   The style also emphasised using the sword to put the opponent on the ground, where they could be finished by a dagger slid into an eye slot or under the skirt of the armour into the femoral artery.

This of course brings us to my fourth question, which is about how people actually used longswords.  Fortunately, we have a significant number of surviving medieval fighting manuals to help us answer this question.  Most come from Italy and Germany, which may reflect the stronger chivalric duelling culture in these countries, compared to stronger states such as England and France which prohibited such duels more effectively.

Obviously, these still need to be interpreted and understood, and in many cases the only way to do that was to physically work through the moves .  Fortunately, I've been involved in medieval re-enactment and historic martial arts for a number of years, but working on this book did require me to raise my game – it's probably the only Osprey where I've had to pay for knowledge with actual sweat and (a little bit) of blood.

The problem then was how to get this across to the reader – Osprey books aren't training manuals, and it would never all have fitted within the available space anyway.  Fortunately, one of my colleagues was able to produce a number of three-panel “comic strips” which show how a number of moves work, which at least gives a flavour of the techniques being taught.

Overall, the fight books teach a “no holds barred” style that resembles modern military close-quarter fighting techniques more than it does later rapier fencing.   Every part of the sword was used to attack – the point was used for thrusts, both edges for cuts and slices, the heavy pommel was used to strike and even cross-guards were used to hook an opponent or punch like brass knuckles.

Three distinct styles were taught, for fighting unarmoured opponents, for fighting opponents in armour, and for fighting mounted.   All – even the mounted version – also included grappling and disarms as well as sword work, and were taught alongside other weapons (notably pollaxe and dagger) rather than in isolation;  the intention was clearly to create well-rounded fighters who could deal with any combat situation rather than academic “fencers”.

The final question was to look at the contexts where longswords were used.  For a modern weapon, it's a pretty good assumption that it will be used in battle, with the intent of killing the enemy.  However, this doesn't automatically hold true for the longsword.

It certainly was used in battle, though very often as a secondary weapon – something a mounted knight drew after breaking his lance on his first opponent during a charge, or a back-up weapon for an archer when the enemy made it through the arrow storm and into melee.

Longswords are also used in judicial duels, which were very much your classic “two men enter, one man leaves” way of settling legal disputes, and differed from battle only because they were purely one-on-one encounters.  Given that the loser might well be hung even if he somehow survived, any trick might be tried, and the duellists had to swear that they employed no magic charms or spells.

There was also an entire medieval culture of tournaments and feats of arms.  Like jousting, these could be almost the equivalent of sporting events, with specialised equipment, where death was unlikely and unintended.  At the other of the scale, the “Combat of the Thirty” in 1351 was effectively a pitched battle between opposing sides during the Hundred Years War.  Though fought by pre-arrangement, with carefully matched teams and organised refreshment breaks, it was still a genuine fight in which many of the combatants died or were seriously injured.

Though it is tempting to associate such tournaments purely with the knightly classes, they actually lasted longest among the middle and lower classes in the German towns, where longsword competitions continued well after the weapon had been superseded by the more fashionable rapier elsewhere; I came across a court inquest into the death of a journeyman printer in such a match in Augsburg in 1595, with various witnesses assuring the court that it had indeed been an accidental death rather than a homicide or duel.

Overall, I'm happy that I was able to answer these questions – and others – in the book, and also look at some fascinating areas of medieval craftsmanship, society and warfare along the way.

The Medieval Longsword publishes 25 June. Preorder your copy from the website here.