In today's blog post, Chis McNab, author of Weapons of the US Special Operations Command, recounts his and SOCOM operators' experiences using firearms and introduces the weapons used in warfare. 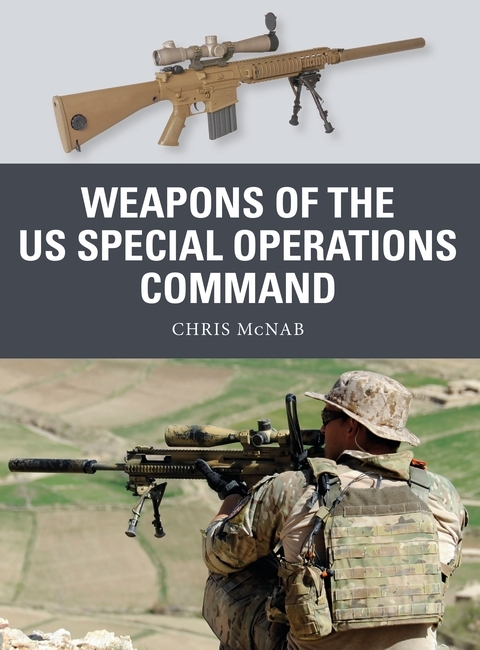 Once or twice a year, I travel to continental Europe to undertake professional advanced firearms training (principally semi-auto handguns and carbines). The experience is unwaveringly intensive, as I usually work towards passing high-level military or law enforcement tests that have unforgiving standards of pass or fail. One UN close-protection handgun shoot, for example, involves firing 27 shots from multiple magazines while constantly on the move (you fail the test if you stop moving or ‘break pace’ when stepping), firing at different ranges, around cover, with left hand and right hand, running while reloading, and doing a fast ‘wounded-arm reload’ – reloading the firearm with a fresh magazine using one hand only. You have 60 seconds to complete the shoot and if you miss a single shot, you fail. (After a lot of work, I passed on my second attempt.)

Yet however much pressure such tests place on weapon-handling skills, the fact remains that I’m performing the tests under no physical threat to myself – no-one is firing back. Through my interviews and research with many veterans, I’m aware that being in a real firefight changes the whole dynamic. One individual, a firearms instructor who has Special Forces experience in Iraq, told me that the first time he was in combat, taking fire from an upper-level window, his carbine jammed. It was a basic stoppage, but in his hyper mental state, he almost completely field-stripped the weapon to clear the jam, then popped up from behind cover and put an accurate burst of rounds directly into the wrong window. The education of those first minutes of combat would be invaluable.

Recently I wrote a title for Osprey – Weapons of the US Special Operations Command (available for pre-order now). In this title, I explain and evaluate some of the key handguns, submachine guns, carbines, battle rifles, sniper rifles, combat shotguns and machine guns used by SOCOM today. From a technological point of view, we're talking about excellence. Ranging from old faithfuls such as the Heckler & Koch MP5 and the M4 Carbine to new modular precision weapons like the Mk 17 SCAR-H and Mk 11 Mod 0 sniper rifle, SOCOM uses some of the finest military firearms available globally today. Furthermore, the capability of these weapons has been transformed by the extensive toolkit of tactical accessories that can be fitted – tactical lights, laser aiming devices, infrared designators, day and night scopes, rangefinding devices, grenade launchers, and so on. An individual SOCOM weapon can more accurately be referred to as a firearm system, far more than just an individual gun.

Yet as the combat analysis in the book shows, all the technology in the world is useless if: a) the firearm doesn’t function with utterly dependable reliability, and b) the operator doesn’t have the skills and mental state to handle the firearm with speed, fluency and accuracy. Through advanced training and a gradual immersion in combat, the SOCOM operator becomes a true extension of the weapon system. His ability to spot and shoot targets, and switch rapidly between them, outpaces his enemies in the race for survival, measured in seconds. Furthermore, unlike my range exercises, the SOCOM operator can do this with incoming rounds pinging off the concrete around him.

The fusion between technology and training presents itself was a stark tactical superiority against those less well trained or poorly equipped. One incident in Afghanistan, explored in the book, sees a SEAL team manoeuvre themselves into position around five Taliban insurgents at night, and illuminate them with IR devices. On command, all five Taliban were despatched with simultaneous killing shots. Even as the IR light played on them, the Taliban had no idea they had been targeted – they were helpless to defend themselves and didn’t even know it.

Writing this book not only brought me further insight into modern firearms technology, but also made me aware of the skills and tactics that separate a person like myself – someone competent in handling firearms, but only tested in range conditions – and someone like a SOCOM operator. The latter is able to think well beyond the paper target, and handle his weapon with split-second assurance even under the adrenaline loads imposed by combat.

Pre-order a copy of Weapons of the US Special Operations Command to read more.