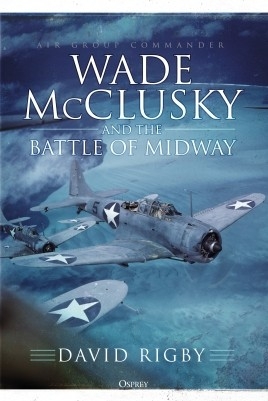 Twentieth-century warfare, as it became more industrialized and more mechanized, seemed to leave less and less room for individual initiative. Modern weapons such as artillery that could lob a shell four or five miles and aircraft which could drop bombs far behind the front lines seemed to make war ever more impersonal with the attackers and the attacked often being invisible to each other. Nevertheless, one man could still make a difference. Wade McClusky was such a man. In the Battle of Midway in June 1942, Wade McClusky found himself uniquely situated in a position which enabled him to affect the outcome of the battle. But despite his utterly decisive role at Midway, Wade McClusky can’t seem to get a break from historians. Instead, his role in the battle is usually either mentioned only in passing in a few short sentences or it becomes the subject of intense criticism. His full story has never been told, until now.

What was Wade McClusky’s role in the Battle of Midway? Quite simply, without him the Americans would have lost the battle. When McClusky took off from the flight deck of the aircraft carrier USS Enterprise (CV-6) in a Douglas SBD-3 Dauntless dive-bomber on the morning of June 4, 1942 and literally flew into history, the United States was losing the war in the Pacific. When McClusky landed back aboard the Enterprise four and a half hours later, the fortunes of war had turned in favor of the United States.[1] What Wade McClusky did was to succeed in leading two squadrons of Enterprise dive-bombers to their target, the Japanese aircraft carrier striking force. Having found the enemy, McClusky ordered his pilots to attack the two largest enemy carriers, the Akagi and the Kaga, both of which were destroyed in the ensuing attack.

Getting his pilots to the target proved to be a monumental task. Due to a course change by the Japanese, the target coordinates McClusky had been given prior to takeoff were out of date. It was time to improvise. Wade McClusky’s achievement was to refuse to panic when the interception coordinates he had been given did not lead him to the Japanese fleet. McClusky’s job as Enterprise Air Group Commander was to lead an attack, not a search. But something had gone wrong and the Japanese fleet was not where it was supposed to be. Now, McClusky had to find the enemy. He then made the crucial decision to search to the north instead of to the south. That decision enabled McClusky to locate the Japanese fleet.

Early accounts of the Battle of Midway, such as that written by Samuel Eliot Morison, speak approvingly of McClusky’s actions but do not dwell on the man himself. More recent Midway literature on the other hand often portrays Wade McClusky as supposedly being unfamiliar with dive-bombing tactics to an extent that he supposedly “bungled” the attack on June 4, 1942. Using source material that was generously made available to me by Wade McClusky’s son Philip, such as Wade’s pilot log books, I was able to determine that Wade McClusky’s experience flying dive-bombers dated back to 1930, a dozen years before the Battle of Midway. Wade McClusky was a wonderfully versatile pilot who had flown just about every aircraft type in the naval inventory: dive-bombers, torpedo planes, flying boats, and observation planes. By the time of Midway, McClusky had logged more than 2,900 hours as a pilot (some 400 of those hours being in dive-bombers).

In the book, I spend a considerable amount of time describing how the dive-bombing attack that Wade McClusky led on June 4, 1942 unfolded in order to demonstrate that McClusky did not bungle anything. I mention that written doctrine for Navy dive-bomber pilots in 1942 was riddled with contradictions and inconsistencies that could and did mean that different pilots could interpret that doctrine in different ways.

It is true that the in the confusion of the attack that McClusky led, his two squadrons of dive-bombers did not divide evenly over the two target carriers, resulting in more planes diving on the Kaga than on the Akagi. Wade McClusky’s critics like to say that McClusky supposedly chose the wrong target for himself and for Scouting Squadron Six (VS-6), resulting in confusion that left only three dive-bombers to attack the Akagi. Examining other sources such as written accounts and a series of diagrams drawn by American Midway veterans that are available in the Walter Lord Papers at the Naval History and Heritage Command in Washington, DC, I was able to determine that definitely at least four, almost certainly five, and perhaps several more American dive-bombers actually dove on the Akagi, and so the attack was not as unbalanced as it is presented to be in some Midway books.

While I describe the attack in considerable detail, I tried hard not to let a discussion of process obscure the final result. In the end it is far less important whether three, five, or more dive bomber pilots dropped their bombs on the Akagi. The critical point is that Wade McClusky ordered his pilots to destroy the Akagi and the Kaga, and that is exactly what his pilots proceeded to do. I conclude that when assessing Wade McClusky’s performance, it is hard to argue with success.

To read more, order your copy of Wade McClusky and the Battle of Midway.