Today on the blog, Brian Lane Herder, author of US Navy Battleships 1886-98, gives an intriguing overview of late-19th century US battleships. 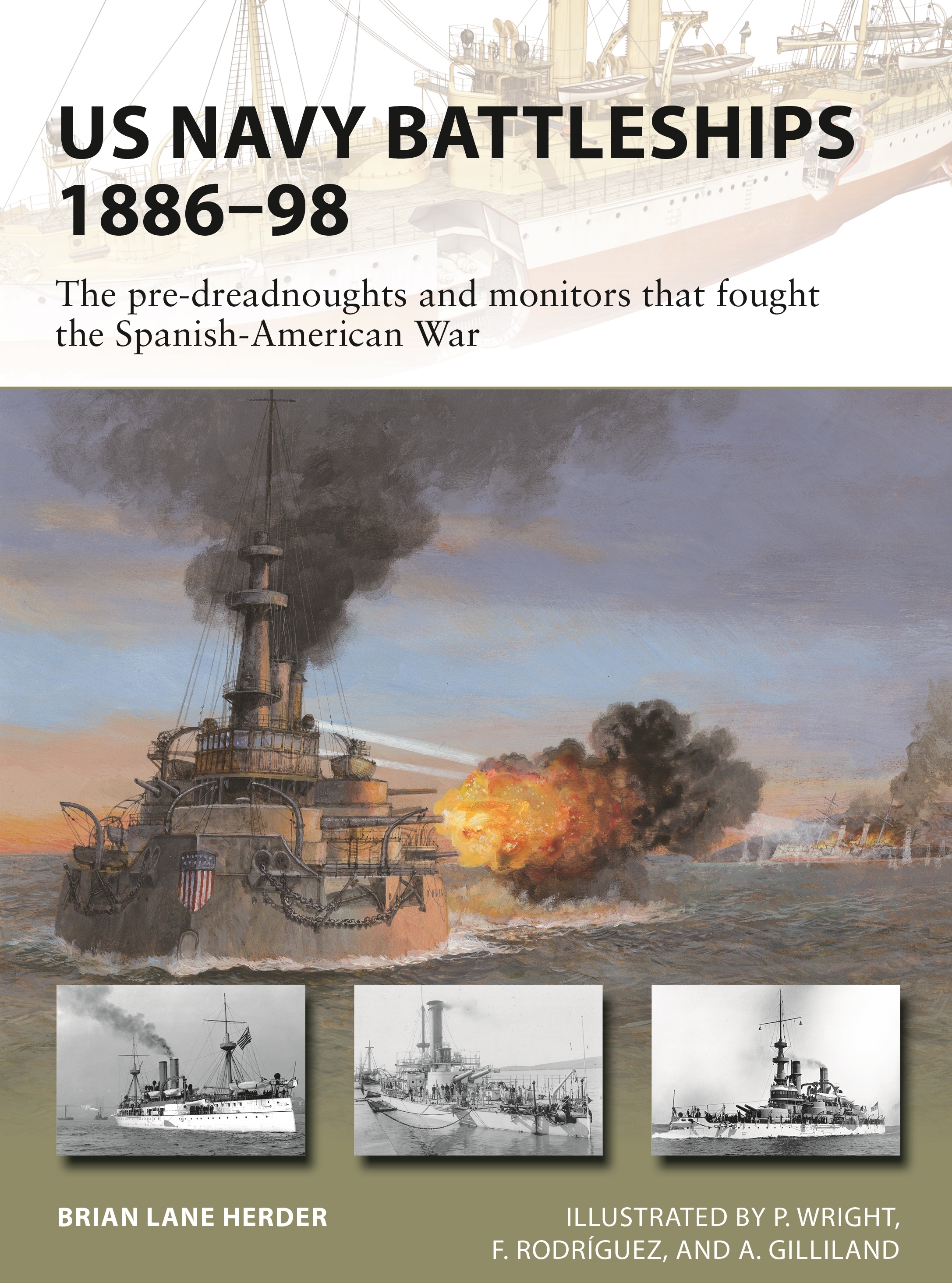 American pre-dreadnought battleships are pretty interesting for a number of reasons, and I was excited to research and write about these very first six American battleships – Maine, Texas, Indiana, Massachusetts, Oregon, and Iowa. The first, Maine, mysteriously exploded in Havana, Cuba on February 15, 1898, eventually leading to the Spanish-American War of 1898. The remaining five battleships, despite their flaws, all performed outstanding wartime service. They were joined by the six large, obsolete monitors (Puritan, Amphitrite, Monadnock, Miantinomoh, Terror, and Monterey) which were effectively coastal defense ships fitted with battleship guns and armor. The outbreak of war caused Congress to authorize four new monitors over the US Navy’s objections (Arkansas, Florida, Nevada, and Wyoming). These six battleships and ten monitors are the subject of US Navy Battleships 1886–98.

What is a battleship, anyway? The term comes from “line-of-battle ship” and refers to wooden “ships-of-the-line" dating back to about the 1600s. These were the largest, most powerful, and most expensive warships in a navy. They typically fought together, to reduce the vulnerability of any one ship, and they also fought in a line, to maximize their armament, which was arranged in broadsides. In the early 1870s the wooden ship-of-the-line was being replaced by a steel-constructed equivalent with new technologies. But the idea remained the same. A battleship was built to have the maximum practical offensive firepower on a single hull. Because big guns were such an expensive investment, they needed to receive the best protection. Battleships therefore were superlative in terms of firepower and protection - in theory only a battleship could destroy another battleship. Because all warship designs are compromises between firepower, protection, and speed, battleships tended to be well-armed, well-armored, and slow.

In 1873 the Royal Navy commissioned the HMS Devastation, which was entirely steam-powered, employed heavy steel armor, and carried her four 12-inch main guns in revolving armored turrets along her centerline. She is generally recognized as the first battleship in the modern sense. There was, however, a brief 1870s/1880s craze for unproven line-ahead ramming tactics – this was the genesis of the “echeloned battery” battleship which could theoretically fire its full battery in any direction. The US Navy’s first two battleships, Maine and Texas, were both built to this style before the type quickly became obsolete.

Perhaps the most glaring question is, why were there any “pre-dreadnought” battleships in the first place? Didn’t it always make more sense to have a whole lot of big guns rather than a few big guns and a whole bunch of smaller guns? The answer is yes ... provided you could reliably hit the target. The 12-inch guns of the 1880s and 1890s could theoretically lob a shell almost ten miles, but they were hardly worth firing unless you were within about one mile, if you wanted to have a chance to hit something. And you’d better hit something, because you only had one shot about every five minutes. During those five minutes of dead time, there was still a battle raging around you and you’d probably better be shooting something.

This is where the lighter guns came in. Although they hit with less power, smaller guns always fire faster (all else being equal) and so now, while you were waiting for your big guns to reload, you could still engage the enemy. Additionally, in an era of very poor accuracy, a high rate of fire also made it more likely that you would actually hit something. After the 12-inch guns, pre-dreadnoughts usually mounted 6-inch gun secondary batteries and added additional batteries in decreasing caliber and power (but increasing rate of fire) all the way down to machine guns and Gatling guns. These small guns may not have been able to penetrate heavy battleship armor, but they could still do a lot of damage to anything topside that wasn’t under armor. And because even the 12-inch guns had to be within a mile to fight, the faster-firing small-caliber guns were not at any great range disadvantage. These smaller guns helped cover a battleship during the big guns’ protracted reloading cycles, and they also helped fend off fast torpedo boats.

During the 1880s and 1890s, French and British industry made rapid advances in both gun and shell design. By the early 1890s, the French and British began fielding “quick-firing” 6-inch guns firing 5-7 explosive shells per minute. What made these larger guns quick-firing was improved breeches and semi-fixed brass shell casings (rather than clumsy and dirty powder bags). It was these quick-firing 6-inch guns that made ramming tactics obsolete, because they could hammer approaching ships in a storm of highly-destructive explosive shellfire. In short, these guns were approaching modern naval weapons.

Meanwhile, the lightest guns, such as the machine guns and one-pounders (37mm), were generally mobile. They were often mounted high up in a crow’s nest (fighting top) to rain small-caliber fire down on enemy crewmen. They could also be mounted on boats or taken ashore to provide fire support to the battleship’s naval infantry battalion.

In the last decades of the 19th century, a technological arms race increasingly developed between the hitting power of the largest guns and the strength of the armor. Slower, smoother-burning propellant allowed longer, lighter barrels and therefore more powerful guns. The 1870s adoption of improved “cocoa powder” over earlier “black powder” put a temporary ceiling on gun power increases. From then on, new armor types continued to improve in strength, but the advantage was expressed not in greater protection, but lighter armor that allowed the same protection for less weight. Less weight for armor, of course, meant more weight available for armament, machinery, and living conditions.

While other minor powers purchased their modern warships from Europe, an import caveat in Congress’ 1886 authorizing legislation required American battleships to be manufactured entirely in the United States. As a developing economy, the 1880s American steel industry mostly specialized in the mass production of cheap items, such as railroad rails and wrought-iron bridges. Truly high-technology steel forgings were imported from Europe. No American mill was capable of producing battleship guns, armor, or heavy machinery. With the promise of federal contracts, in the late 1880s/early 1890s Bethlehem Steel and Carnegie Steel each imported, purchased, or developed the heavy manufacturing plant and high-artisan skill required to manufacture battleship guns and armor. Before the battleship contracts, such expensive investments had been too risky. The upside was that once developed, the federally subsidized high-technology forges could then be used for civilian applications. One example was the Ferris Wheel at the 1893 Chicago World’s Fair, which spun on a high-strength axle produced by technology derived from American battleship development. More importantly, the United States’ impending skyscraper boom was only possible thanks to the Congressionally mandated high-strength steel technology developed for American battleship armor.

What made pre-dreadnoughts obsolete? The short answer is torpedoes. The fear of torpedoes forced naval planners to find ways to improve gunnery accuracy, so that engagements could take place outside the range of torpedoes. The main battle of the American pre-dreadnought battleships, the July 3, 1898, Battle of Santiago de Cuba, took place at ranges between 1,000 and 2,000 yards … at this range, fast, dirt-cheap torpedo boats could swarm and sink a prestigious and expensive battleship in a matter of seconds. This was too close for comfort, and other navies had picked up on this concept as well. Over the next few years, various technological and operational improvements greatly increased accuracy and firing rates, even with the same weapons – the 12-inch gun could now fire more than once per minute, and also hit targets at several miles. At this distance the automatic weapons were out of range, while the medium weapons’ shell splashes began interfering with spotting for the 12-inch guns, which now fired almost as fast. The obvious solution was a battleship with a main armament of only big guns to destroy enemy battleships, and a single light battery of quick-firing guns to fend off torpedo boats. Although HMS Dreadnought was completed first, in December 1906, in reality every major navy had independently reached the same conclusion several years earlier.

To read more about the American pre-dreadnoughts and monitors’ epic combat during the “splendid little war,” as well as their fascinating and occasionally bizarre postwar histories (including 1920s remote-controlled drones, World War II amphibious invasion barges and 1950s floating hotels?), pre-order US Navy Battleships 1886–98: The pre-dreadnoughts and monitors that fought the Spanish-American War.