On the blog today, Christian Jennings, author of The Third Reich is Listening, looks at some of the declassified archive material related to German wartime cryptography. 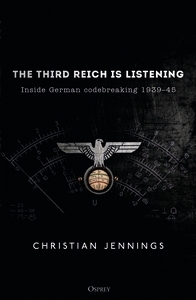 What on earth were German codebreakers in World War II trying to discover by decoding a Guatemalan diplomatic codebook? And what was the interest of the Third Reich’s signals intelligence and cryptanalytical agencies in getting their hands on Brazilian, Iranian, Finnish and Irish codebooks? One answer lies with the vast amount of material related to German wartime cryptography and signals intelligence that is currently held by the Political Archives Department of the German Ministry of Foreign Affairs. It gives a clear idea of the ambitious breadth and span of the Third Reich’s codebreaking activities. The ministry’s archives list nearly 4,000 different items, all of them returned to Germany in the year 2000 by the British Government. The material originally came from the archives of the Allied Target Intelligence Committee, or TICOM, and consists of signals codebooks, cryptanalytical documents and technical assets captured by the British and Americans as they moved into Germany in 1945. For more than fifty years, the Allies guarded the material closely, and only in the last two decades has much of it been declassified.

The German foreign ministry has, with characteristic thoroughness, listed everything on a Excel spreadsheet. There are 3,917 items. There are diplomatic codes, recipherment tables, and technical material from Japan, China, Bulgaria, Russia, Yugoslavia, Poland and Italy. Some of these items are codebooks captured when the Third Reich invaded, occupied or advanced into these countries, or were exchanged between them and their allies. There are Italian diplomatic cables, along with their respective encoding keys, Japanese messages from Tokyo to their embassy in Bern, Bulgarian messages from Sofia to Rome and Switzerland, and diplomatic messages from Poland and Ethiopia. And this is just in the first fifty items on the spreadsheet.

There are Romanian diplomatic messages from 1941 to 1944, the Italian police codebook from 1942, and a lot of Chinese, Japanese, Turkish, Greek, Spanish, Russian, Italian, Swiss and French diplomatic and military signals and codebooks. There’s a French naval codebook from 1936, an unspecified list of British encoded naval signals, and an RAF codebook from 1943, as well as Brazilian, Belgian, Iranian, Irish, Siamese, Mexican, Argentinian and Norwegian material, a Peruvian diplomatic code, and even an expired Afghan code setting from 1945. Then there is a large amount of German cryptographic material, including lists of different key settings for its Enigma machines. The Third Reich had been very busily listening to its allies, its enemies and neutral countries, and by war’s end the Allies had, through the TICOM mission, captured a windfall of intelligence.

The German interest in the cryptanalytical systems of its enemies, such as Great Britain, France, the Low Countries, Greece, Yugoslavia and the United States was one of obvious strategic necessity. Countries such as Brazil, Argentina, Venezuela and Peru were important because they formed a geographical part of Operation Bolivar, the German establishment of spy rings in South America. Neutral countries like Ireland and Portugal were vital because of their geographical location and potential allegiance or hostility to the Allies, and because they hosted numbers of intelligence agents from countries neutral, hostile and allied to Germany. Iran, for instance, mattered because of its oil, and China because it was at war with Japan. Reading into Swiss codes was vital for the Third Reich’s cryptanalysts, because under Operation Green, and then its successor, Operation Tannenbaum, the Germans and the Italians were planning to invade Switzerland in 1940. And Guatemala? The TICOM archive does not, as yet, reveal the reasons why the Third Reich would be interested in intercepting and breaking Guatemalan codes.

Finland is one of the countries whose signals intelligence material is now in the German government archive; it was one of the most proficient countries in the field of wartime codebreaking. It was also extremely active in sharing, selling or swapping its cryptanalytical secrets with its neighbours and allies. Finland had been part of the Russian Empire until 1917, when it declared independence, after which a short but bitter civil war followed between the pro-German White Finns, and the pro-Russian Reds. The former won. By the time of the Soviet invasion of 1939, about a hundred Finnish codebreakers from their Soviet section were solving Russian codes. The Finns then proceeded to break into some of the codes of the Allies, as well as Turkey, France, Yugoslavia and the Vatican. They swapped this information voraciously with both sides, Axis and Allies. They did this particularly with the Japanese, which meant that the Americans, who were reading the latter’s codes, saw that information about their own compromised cryptosystems was being passed from the Japanese military attaché in Helsinki to Tokyo in return for financial support for the Finnish cryptanalytical sections.

When the Finns tried to break into the American encoding format called the M-138 strip cipher, the Japanese gave them physical intelligence in the form of intercepted alphabet strips. These were lists and rows of letters the Americans used to encode signals in the Pacific and elsewhere. The Germans gave the Finns some technical assistance to help solve these encryptions. In 1939 and 1940 the British reportedly also gave the Finns some technical help with their equipment, as well as money; in return they wanted the Finns to give them some signals they were intercepting from other countries, as well as explanations about how these were encrypted. In early 1941 the Finns handed over to the British a Russian naval codebook used by their Black Sea Fleet, which they had deciphered. The British then gave this to the Americans. However, the Finns were by now cooperating much more closely with the Germans, and two members of staff from the Wehrmacht High Command’s signals intelligence section, known as OKW-Chi, went to Finland to work with them. They cooperated on solving the American M-138 strip codes. The Finns also shared information with the Swedes, and the Japanese military attaché at their embassy in Stockholm paid Helsinki’s cryptographers for decrypted material.

The Germans, the Finns and the Japanese then exchanged more information: Helsinki’s cryptanalysts had now decrypted some of the special alphabetic letter strips used by the M-138, which they gave to the Germans. They in turn gave this information to the Japanese military attaché in Berlin, who transmitted it back to Tokyo. But the Americans were by then reading the Japanese ‘Purple’ code, and so discovered this compromise of their own cipher systems when the Japanese announced in some of their messages in 1943 that they were reading American messages encoded on the M-138 system. But in a double sleight of diplomatic hand, what the Germans didn’t know was that Finnish intelligence officers had also contacted the US Embassy in Helsinki. They met secretly with American agents in Sweden, and described to them the work being done by the Germans, Japanese and themselves on the M-138 and its alphabetic strips.

So, what did the Germans and the Finns and the Japanese learn from their decryption of Washington’s strip cipher codes? Firstly, it meant they could intercept messages sent and received by the US Embassy in Moscow to and from the Russians, the British and other allied and neutral countries. It is possible they could have intercepted messages from the American embassy in Moscow sent to Washington and London detailing the Russians’ advanced warning about the oncoming offensive at Kursk in 1943. The Germans also claimed they could read signals to and from the US consul in Algiers, which was negotiating with the Free French and the Vichy French, while also coordinating American military operations in North Africa. The Germans also intercepted messages from the American embassy in the Swiss capital, Bern. Not only was this a neutral European city filled with intelligence agents from every nation involved in the war, but it was also the regional operational headquarters of the American Office of Strategic Services. The Germans were also intercepting and reading messages from other American embassies in Madrid, Cairo, Tehran, Lisbon, the Vatican, Ankara and Rio de Janeiro. Information about movements of convoys and warships in the Atlantic and Mediterranean, information from the Russians about the war on the Eastern Front, and information from the Americans about North Africa would have been just some of the operational secrets they deciphered.

One other coup de grâce of cryptanalytical crossover showed how different countries’ codebreaking efforts were linked to each other. The Hungarian cryptanalytical apparatus was monitored and trained by Germans from the SS.  The cryptanalysts in Budapest were supplying the Finns with their own intercepted material from other countries, which included Turkey and some South American governments. So the Hungarians gave Brazilian codes to the Finns, who duly passed them to the Germans. They in turn gained information on the operations being carried out by Rio de Janeiro authorities against German agents operating inSouth America.

In September 1944, following an armistice with the Soviet Union and fearing invasion, Finnish intelligence took its cryptanalytical records and machinery, and 750 personnel, and left for Sweden. They gave intelligence material to the Swedes, and microfilmed it and sold it to several other countries, including Britain and the United States. This was codenamed Operation Stella Polaris. Seventy-five years later, some of these original Finnish signals have now found a final home in the German foreign ministry archive of TICOM material.

The paperback format of The Third Reich is Listening publishes today, get your copy now!