Today on the blog we are joined by Tim Pears, whose new book The Redeemed takes a fictional look at the Battle of Jutland and the scuttling of the German fleet at Scapa Flow.

The First World War came to an end with the Armistice on 11th November 1918. Yet the full remarkable story of one vital thread of that war was far from over.

A prime cause of war in 1914 was the German Kaiser’s envy of Britain’s Empire. It was an Empire safeguarded by the Royal Navy. Throughout the Edwardian period Admiral Tirpitz built up his High Seas Fleet with dreadnoughts and destroyers. The Admiralty kept pace.

In the early part of the war the Royal Navy established a trade blockade of Germany, patrolling the North Sea, which became ‘a marine no man’s land, with the British Fleet bottling up the exits’, as Richard Hough describes it in The Great War at Sea 1914-1918.

Eventually the German High Seas Fleet emerged, on 31st May 1916. The British Grand Fleet engaged, and so there took place throughout that day what is still the largest naval battle in history, which became known as the Battle of Jutland. 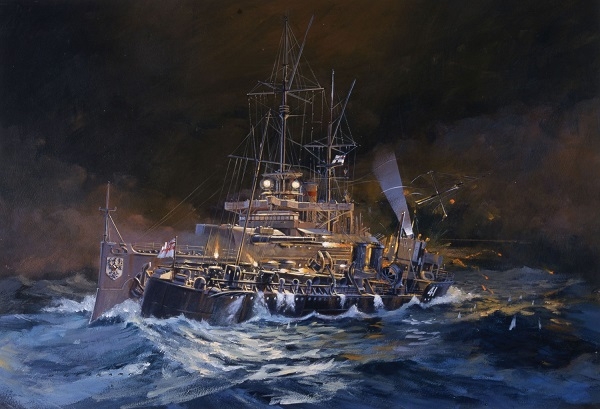 SMS Nassau's ramming attack on the destroyer HMS Spitfire at the Battle of Jutland
Artwork by Howard Gerrard, featured in Campaign 72: Jutland 1916

The result was inconclusive. The British lost more ships and more men. Both government and public, hoping for another Trafalgar, were unimpressed. As the surviving ships sailed back into the Firth of Forth the following day, railwaymen threw coal from the Forth Bridge as they passed beneath it, contemptuous of the navy’s cowardice.

When the War came to an end two and a half years later, however, the Battle came to be seen in a new light, for the German ships had never again ventured en masse outside their harbours on the Baltic coast.

After the Armistice, the surrendered German fleet in all its humiliated glory was escorted by the Allied fleet in a line on either side, ‘like sheepdogs,’ to Scapa Flow in the Orkneys. Here it remained, with skeleton crews, while peace negotiations took place far away.

The Commander of the Fleet, Rear Admiral Ludwig von Reuter, was kept in the dark. He was only able to calculate that on the day of reckoning he would be obliged to either hand over his ships to the enemy or refuse to and be swiftly overcome. He and his senior officers came to a third – as they saw it more honourable - option.

On 21st June 1919 it so happened that a number of the British ships in the Flow went out on manoeuvres. It also happened that a party of Scottish children were taken around the Flow on an excursion to see the German prisoner ships close-up. What they witnessed instead was an extraordinary sight, and first-hand lesson in history.

‘Suddenly, without any warning and almost simultaneously, these huge vessels began to lift over to port or to starboard,’ James Taylor, fifteen at the time, wrote many years later. ‘Some heeled over and plunged headlong.’

The German navy were scuttling their fleet. 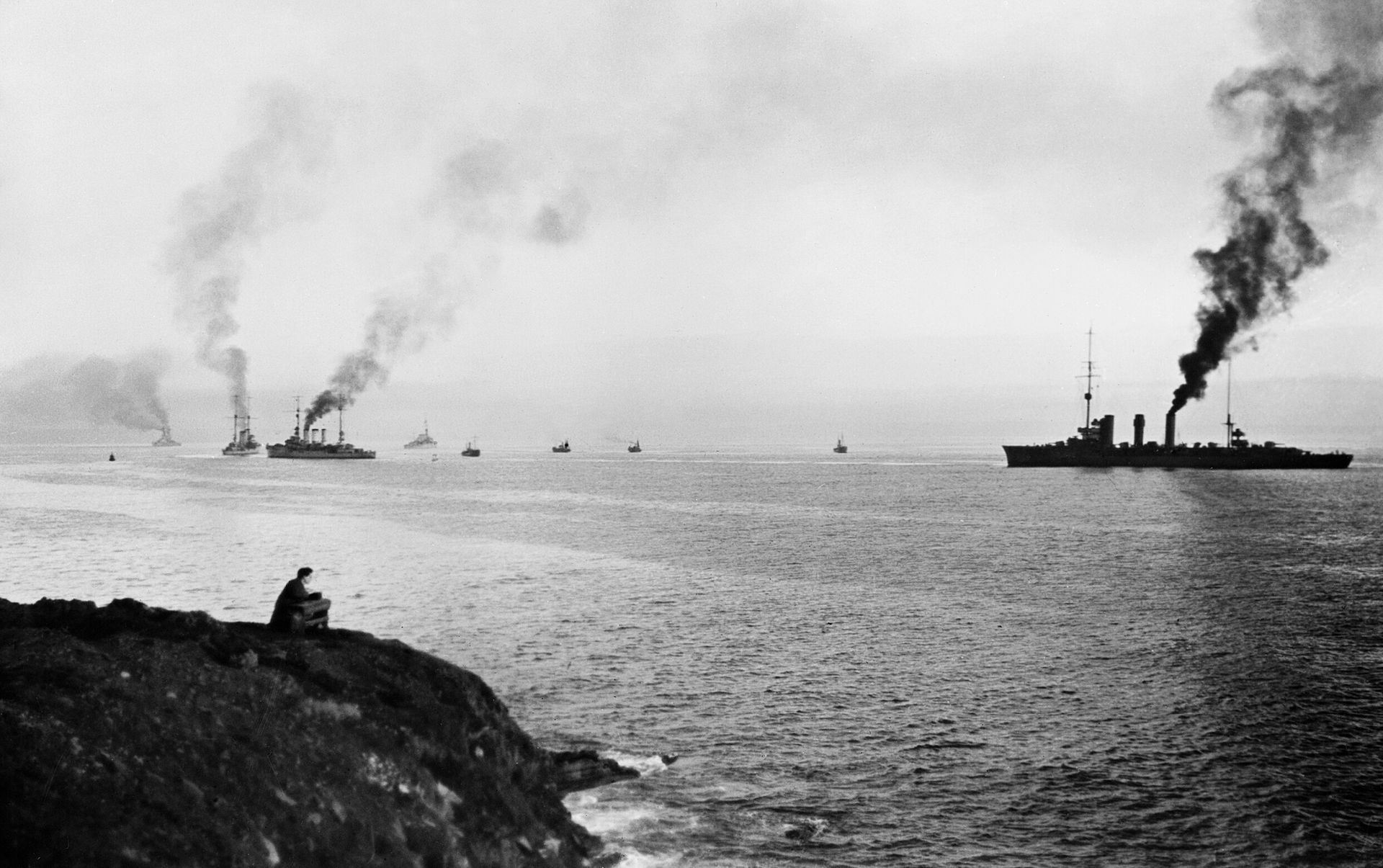 ‘Out of the vents rushed steam and oil and air with a dreadful roaring hiss. Vast clouds of white vapour rolled up from the sides of the ships. Sullen rumblings and crashing of chains increase the uproar as the great hulls slant giddily over and slide with horrible sucking and gurgling noises under the water.’

British sailors tried to curtail the scuttle. Shots were fired at unarmed German sailors rowing away from the sinking ships. Nine died, sixteen were wounded.

German Admiral Reinhard Scheer declared, ‘I rejoice. The stain of surrender has been wiped from the escutcheon of the German Fleet. The sinking of these ships has proved that the spirit of the fleet is not dead. This last act is true to the best traditions of the German Navy.’

Eventually fifty-two warships, weighing 400,000 tons, lay on the ocean floor. ‘Where they are sunk, they shall rest and rust,’ proclaimed the Admiralty. ‘There can be no question of salving them.’

Postscript: the story of the German Fleet continued. During the nineteen-twenties the price of metal on international markets kept rising. The British government became aware of the huge tonnage of metals in deep water in the Orkneys. A contract was put out to tender and won by a Birmingham scrap metal merchant, who had no experience of marine salvage.

Ernest Cox’s ignorance would prove a great hindrance but, in the end, a blessing. He raised the lighter destroyers, using winches and cables, but continually failed with the far bigger (and more valuable) sunken battleships. 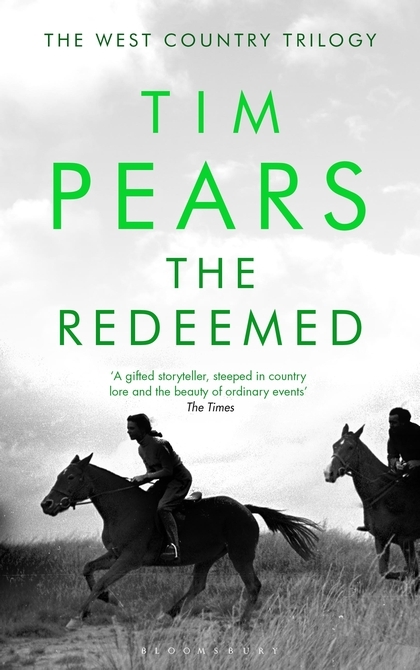 After three years of expensive effort, close to ruin, Cox came up with a new idea of his own. Previous opinion held that it was possible to suck the water out of a submerged vessel. Instead, Cox’s crews made the hull of battlecruiser SMS watertight. Then they pumped air into it. It took many days until a state of positive buoyancy was reached, and all of a sudden this leviathan came groaning and bubbling and shooting up to the surface, resurrected.

The process was repeated with the other big ships. Today only seven of the fifty-two wrecks remain in Scapa Flow.

Tim Pears's new novel, The Redeemed, opens in 1916 with young Leo Sercombe, boy seaman in the Royal Navy, hauling coal aboard battlecruiser HMS Queen Mary. Neither Leo nor anyone else has any idea, but it is the eve of the Battle of Jutland. The Queen Mary will go down, Leo one of her few survivors. He will go on to witness the Grand Scuttle of the German Fleet in Scapa Flow in 1919, then to work as a diver for redoubtable entrepreneurs salvaging the ships for their metal. The wild, unchanging West Country roads of his boyhood, where his childhood sweetheart Lottie has adventures of her own, seem very far away. In a world torn asunder by war, everything dances in flux: how can the old ways life survive, and how can the future be imagined, in the face of such unimaginable change? The final instalment in Tim Pears’s exquisite West Country Trilogy, The Redeemed is a timeless, stirring and exquisitely wrought story of love, loss and destiny fulfilled, and a bittersweet elegy to a lost world.