Bill Harriman, author of The Arisaka Rifle, joins us on the blog to discuss his interest and experience with different Arisaka models. 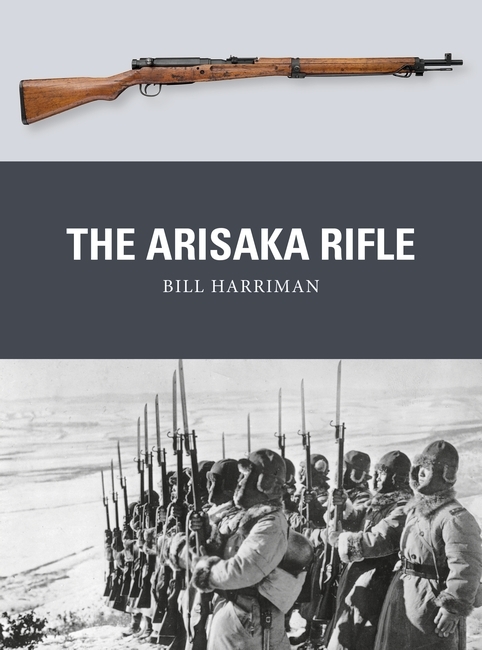 I wrote the book on the Arisaka family of rifles in order to try to bring several diverse sources of information into one readily accessible place. That said, there is actually very little out there. That situation mirrors the absolute dearth of surviving specimens here in the UK. I have always found that somewhat hard to understand given that Britain fought extensively in the Far East. However, it seems that the British serviceman was not prone to firearms “bring-backs” as was his US counterpart. Certainly, during some 40 years as both a gun dealer and collector, I never saw more than 100. Yet for all that, the Arisaka interested me, probably as a result of its exotic Eastern origin. As an avid collector and shooter of military rifles, I just had to have one.

I was pleased with my first Arisaka, a Type 38. It was an interesting gun and always attracted a lot of attention when I took it for an outing at the club. Ironically, my pals probably fired it more often than I did. Whilst it was quite long and ungainly, its minimal noise, recoil and muzzle-flash made it pleasant to shoot. I won a few competitions with it as well, particularly those for the smaller calibre military rifles. The organiser of one match said he was delighted to see it won by a competitor with a rifle that was not a 6.mm Swedish M1896 Mauser.

Then one day, I had a revelation. Since 1985, I have been one of the panel of specialists on the BBC TV programme “Antiques Roadshow”. At one venue about 20 years ago, a lady showed me some ace photographs of her grandfather when he was in training, early in 1915. One shot showed him with his pals outside a bell tent somewhere in the north of England. They had long rifles with fixed bayonets. At first, I thought they were the long Lee Enfields that were relegated to training to free up Short Magazine Lee Enfields for use at the front. Then, something told me to take a second look. Far from being long Lees, the men’s rifles were Type 38 Arisakas. After quizzing a chum, I found out that Britain used the Arisaka as a training rifle during World War I.

My interest piqued, I decided to find out more about the Arisaka and ran into the very problem that I have attempted to rectify in this book. There were snippets of information available, but you had to look far and wide for it. Hopefully, now anyone who wants to know about it will only have to go to one place; a one shop stop, if you like.

Further Arisakas came my way. One day whilst out pheasant shooting, one of my fellow guns sidled up to me and in conspiratorial tones told me about the “Japanese assault rifle” in the attic. It transpired that it was a rare Type 38 carbine. I kept it for a few years and then being strapped for cash with two young daughters, I sold it. Life is full of regrets and that is one of them.

A few years after that, I was in a dealer friend’s strong room in Nottingham. He had half a dozen 7.7mm Type 99 Arisakas in his racks. I bought the only one with the folding wire monopod. There was a Type 2 take down paratrooper rifle there too, but that was spoken for. I enjoy shooting the Type 99 which is very similar to the 7.92mm Mauser cartridge in performance.

If finding a rifle was difficult, then finding original accessories for it was near impossible. I was forced down the path of buying very good replicas. Carefully aged, a replica leather ammunition pouch does not look out of place when displayed in conjunction with an original rifle. I have always subscribed to the notion that if an affordable original is not available then it is perfectly acceptable to fill in the gap with a good replica. I have always fancied an original Colt Texas Paterson revolver but as I am just a poor lawyer, I have to make do with an Italian replica. The same principle applies to Arisaka rifle accessories.

Now that I have got the Arisaka Rifle book under my belt, I feel a great sense of satisfaction. The series editor (Martin Pegler) sent me an email saying that he thought it a good piece of work. Coming as it does from such an accomplished a scholar and author that is praise indeed.

This book has had a long gestation period and a difficult birth but now that it is here, I think it adds something to the Osprey Weapon series. I hope that if you read it, you’ll agree with me.

To find out more, order your copy The Arisaka Rifle.