On today's blog post, we're looking at three fantastic pieces of artwork from a few of our February 2020 titles. Let us know what you think in the comments section. If there are any March titles you would like to see artwork from, be sure to mention that too! 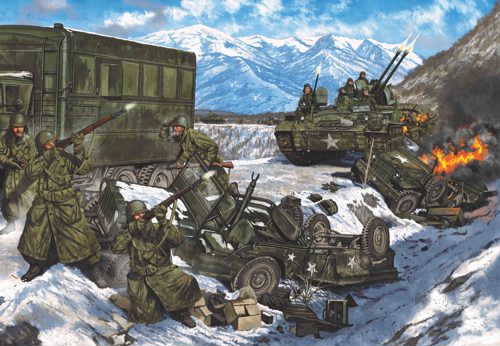 This piece of artwork, requested by AdamC, depicts troops from Task Force Faith returning fire on Chinese troops in the hillsides on 1 December 1950. They are supported by an M19 Multiple Gun Motor Carriage, armed with two Bofors 40mm guns and a Browning .50-cal. machine gun. The M19’s twin 40mm guns’ high rate of fire was especially effective against Chinese massed infantry attacks. 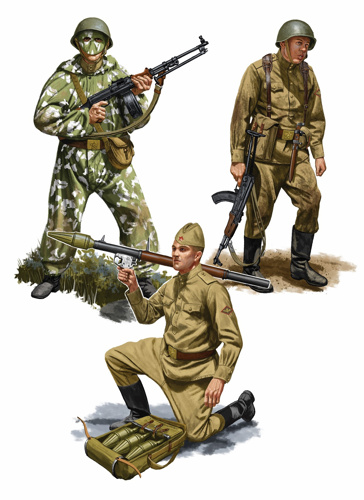 This next piece of artwork shows VDV Paratroopers from 1952–60. The paratrooper on the left is a light-machine-gunner from the 381st Guards Parachute Regiment and is wearing the one-piece KLMK overall (kamuflirovannyi letnyi maskirovochnyi kombinezon, ‘summer camouflage deceptive overalls’) and face mask, newly issued to paratroopers in 1960. He carries an RPD (Ruchnoy Pulemyot Degtyaryova, ‘Degtyaryov’s hand-held machine gun’.

The one in the middle is a grenadier from the 108th Guards Parachute Regiment from the 7th Guards Airborne Division. He is one of a few soldiers in his regiment to be equipped with the new RPG‑2 (Ruchnoy Protivotankovy Granatomyot, ‘Handheld Antitank Grenade Launcher’).

The final paratrooper is from the 337th Guards Parachute Regiment in 1952. His post-war uniform was, like that worn by most of the rest of the Red Army, barely distinguishable from those worn in the latter years of the Great Patriotic War. He is carrying an AKS‑47 (Avtomat Kalashnikova Skladnoy, ‘Kalashnikov’s Automatic Folding Rifle’). 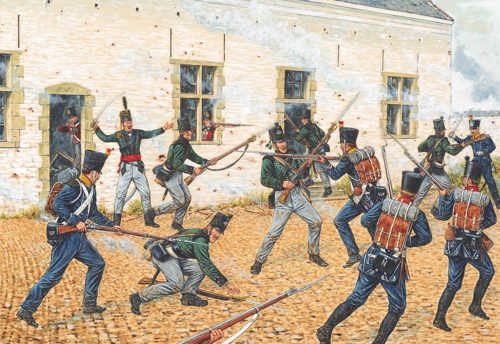 This last piece, requested by PAUL W, depicts the struggle for La Haye Sainte. French light infantry attacked the farm of La Haye Sainte. The riflemen use their sword bayonets to defend themselves as they are out of ammunition while musket-armed personnel of the light company of the 5th Line Battalion KGL are still able to fire their weapons.