Osprey author, Myke Cole is on a research trip around Greece ahead of his upcoming book The Bronze Lie: Shattering the Myth of Spartan Warrior Supremacy. Read on to find out more about his next stop: Sellasia.

I’m writing this from my room in Kokkinórrakhi, in the heights just northeast of Sparta. The Taygetus range, which separates Sparta from its former subordinate neighbor Messenia, rises like a snow-capped wall in the distance.

I spent the day just northwest of the tiny mountain town of Sellasia (do not try to drive there. The winding, narrow streets abut sheer cliffs and are barely wide enough for one car – and traffic flows both ways!). I visited this site because it’s where the Battle of Sellasia (actually the 2nd Battle of Sellasia) was fought in 222 BC. In this battle, the Antigonid (most people call them ‘the Macedonians’) king Antigonus III Doson defeated the Spartan king Cleomenes III, ending the reformist Spartan’s brief revival of Spartan power and permanently consigning Sparta to the dustbin of history. The battle is significant not just because it doomed Sparta’s bid to come back from the dead after its decisive defeat at Leuctra just shy of 150 years earlier, but also because it’s a great example of Spartans fighting not as hoplites, but as Hellenistic pezhetairoi (foot companions), armed with the 21-inch sarissa pike held in two hands. I discuss Hellenistic phalanxes in great detail in my Osprey book Legion Versus Phalanx. There’s no Osprey Campaign series book for Sellasia, and I have made a mental note to tackle this as well, once my desk is clear.

For the site of Sellasia, I started with J. D. Morgan’s article ‘Sellasia Revisited’ in The American Journal of Archaeology, vol. 85, no.3 (1981). Morgan himself is working off descriptions of the battle in Polybius, and also in Plutarch’s Vita Cleomenes and Vita Philopoemen. Here’s the gist of the battle (there’s a lot more detail, which I give in my forthcoming book, The Bronze Lie): Cleomenes occupied ‘Mount Olympos’ with the Spartan right (leading the noble Spartan Peers – Spartiatai). The Spartan left occupied ‘Mount Euas’ under the command of Cleomenes’ brother Eucleidas with the Spartan Perioeci (the ‘dwellers around,’ a kind of free, but second-class subject of Sparta). The Spartan center, consisting of light infantry and cavalry, occupied the center. Opposite Cleomenes was Antigonus in command of the Antigonid Leukaspides (White Shields). Opposite Eucleidas was the Antigonid right, consisting largely of the Antigonid Chalkaspides (Bronze Shields) and also Illyrian mountaineers and Acarnanian allied troops. The Antigonid center consisted of Greek allies, including the famous Philopoemen. We’re not going to worry about the center for the topographical discussion that follows. 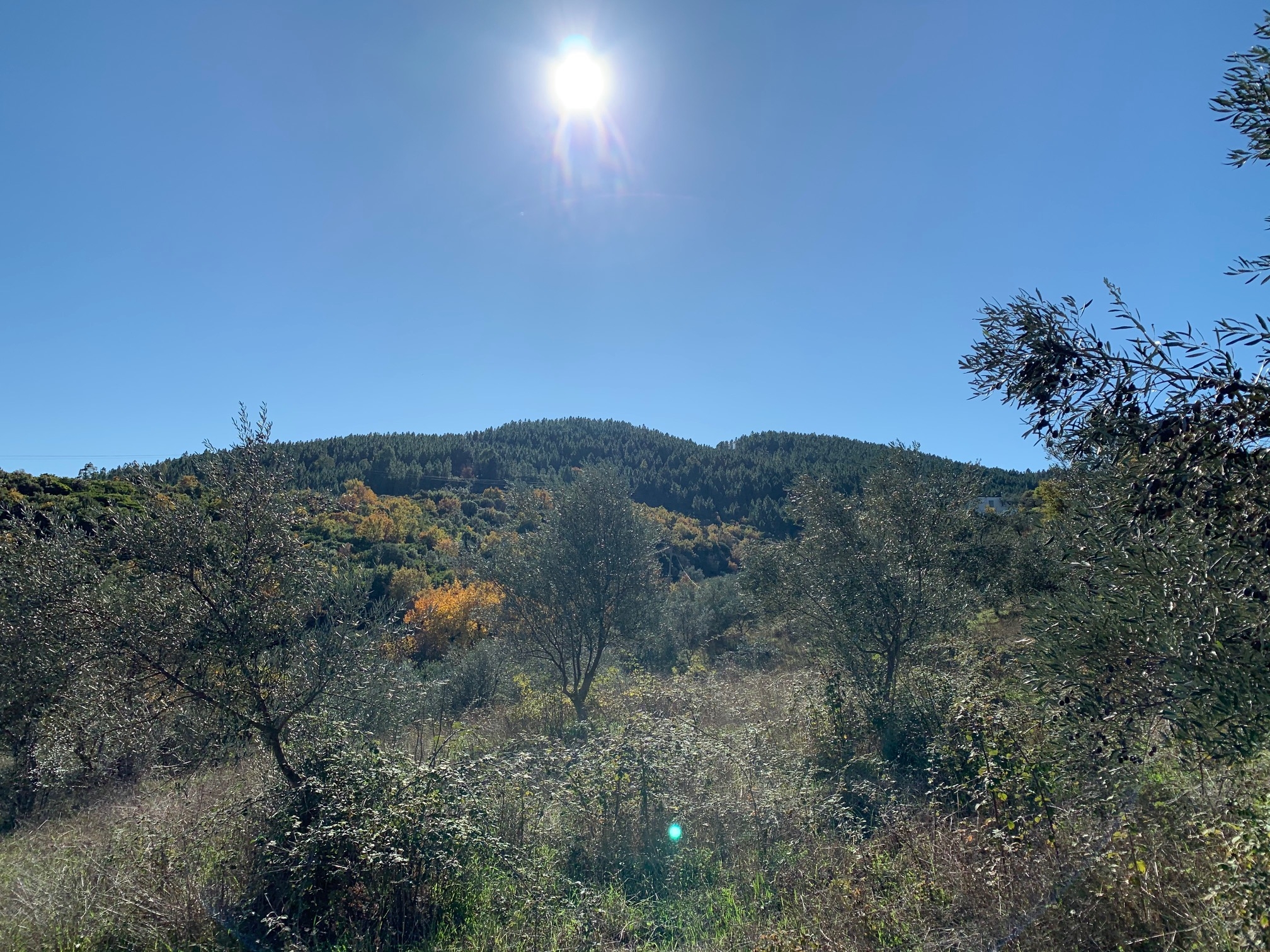 “Mount Olympos” where King Cleomenes III was posted with the Spartan right. 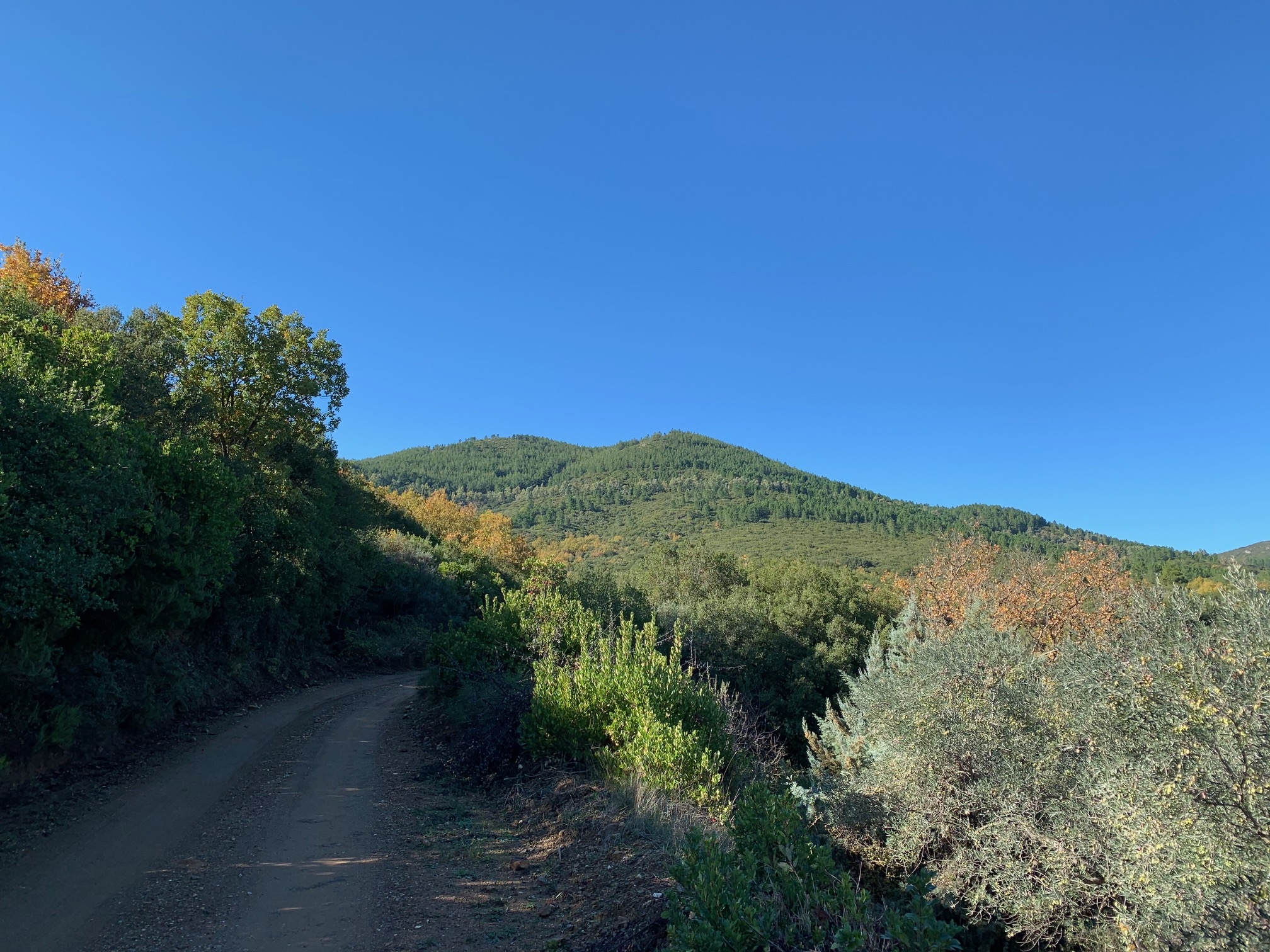 Modern Tourles was likely “Mount Euas” where Eucleidas was stationed with the Spartan left. 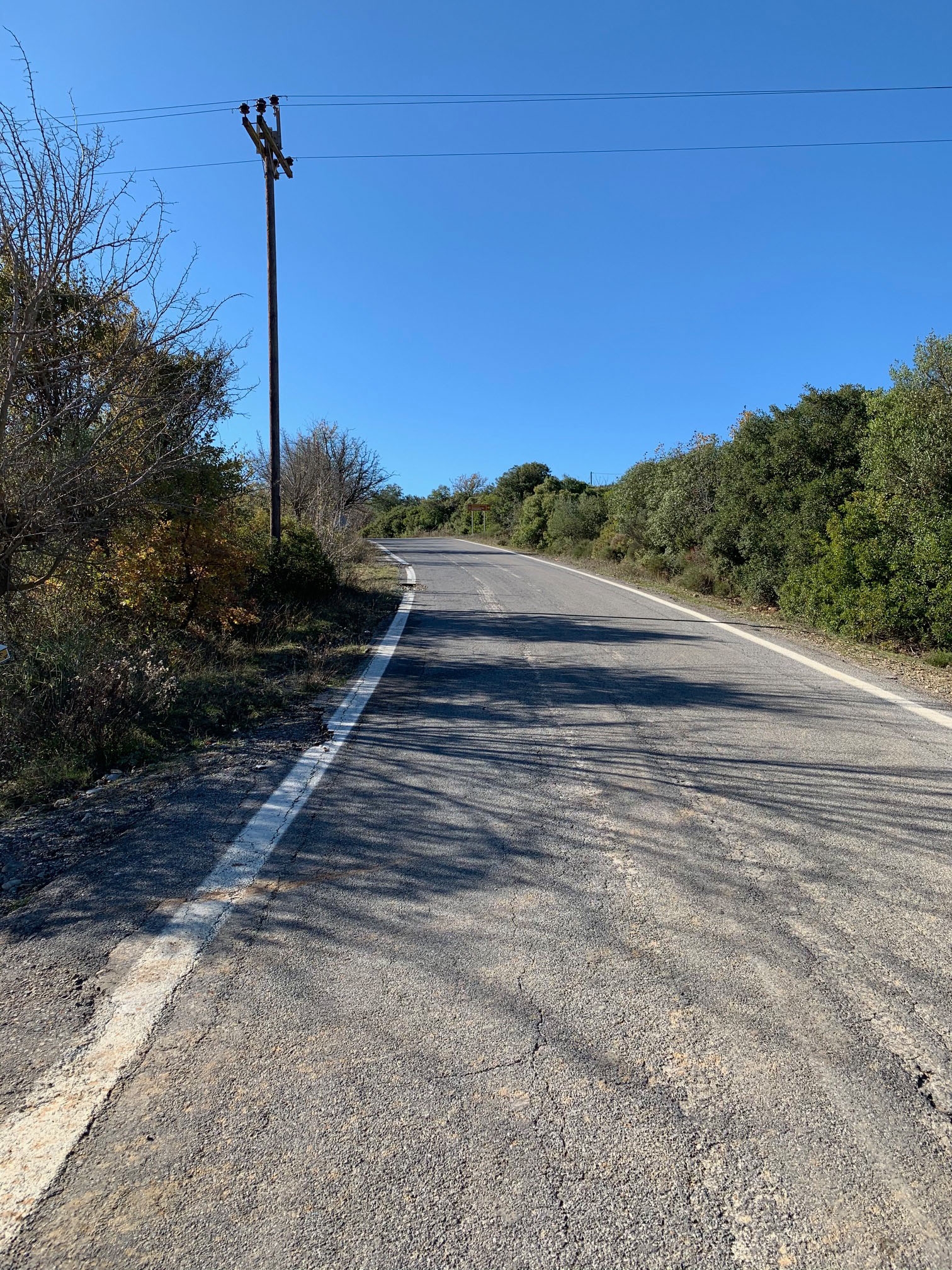 This ordinary looking road heads through the pass north of Sellasia, which means the Spartans would have sought to block it. The Spartan center would have been posted around here.

Is our resulting theory of the Spartan position correct? Walking the battlefield makes me think it is: Plutarch tells us that Eucleidas was flanked by the Illyrian and Acarnanian troops via a ‘secret way’ and destroyed. He also notes that Cleomenes saw this occurring and that Spartan morale cracked at this point in the battle. Plutarch further tells us that Cleomenes drove the Antigonids back for five furlongs (a little over half a mile) before he saw his brother’s position was hopeless. For Cleomenes to see his brother’s position, he would have to have descended from the heights down into the valley, and so would Eucleidas. I confirmed from walking the battlefield that I could see west from Cleomenes’ position in the valley, but only if the existing olive groves that grow there now were gone. It is impossible to know what grew in that valley in 222 BC, but if the ground was relatively barren, then the view west would have been clear, and we can be reasonably sure of our new position for ‘Mount Olympos.’ 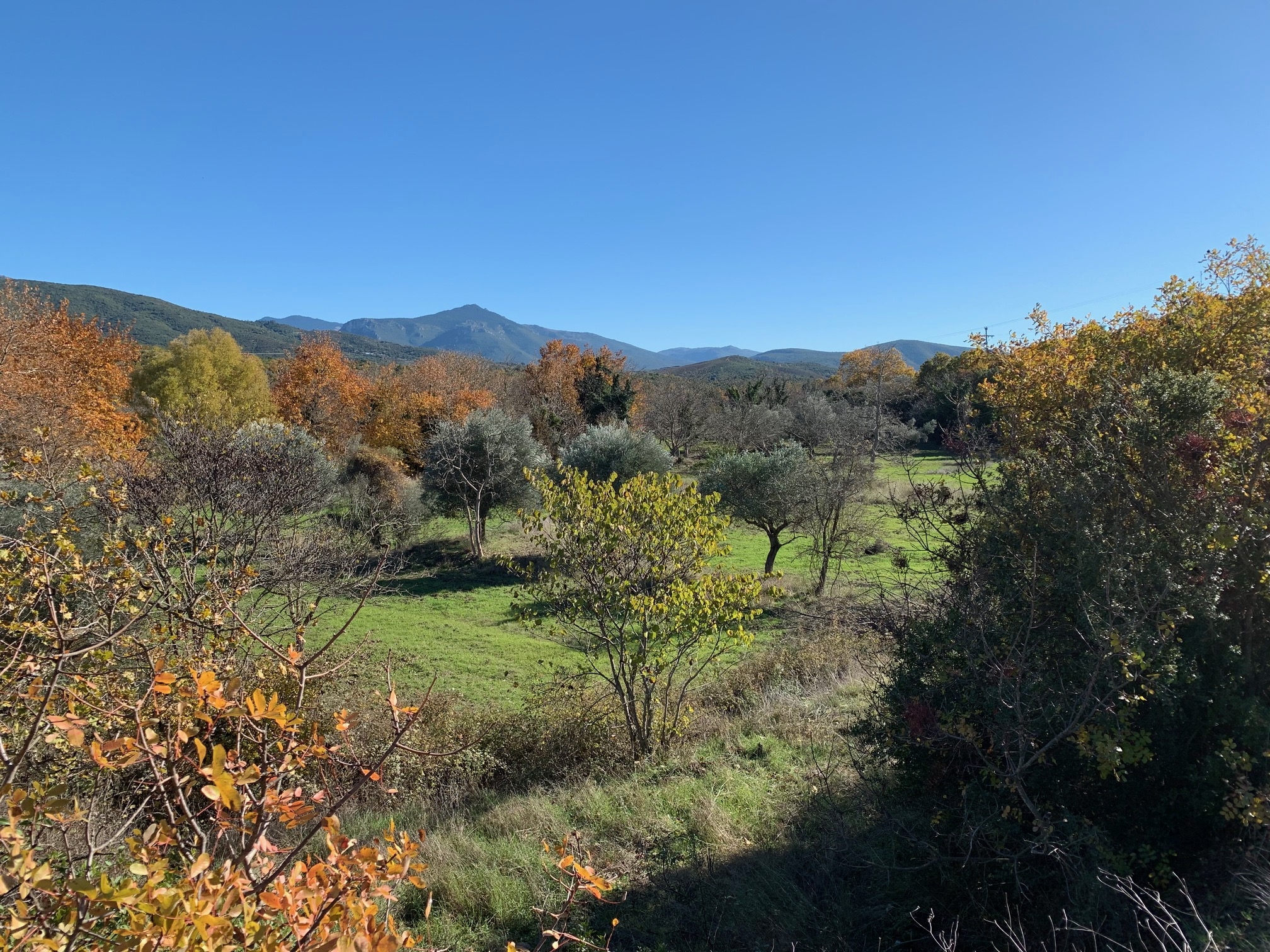 Plutarch tells us Cleomenes pushed the Antigonids back 5 furlongs, likely through this valley. 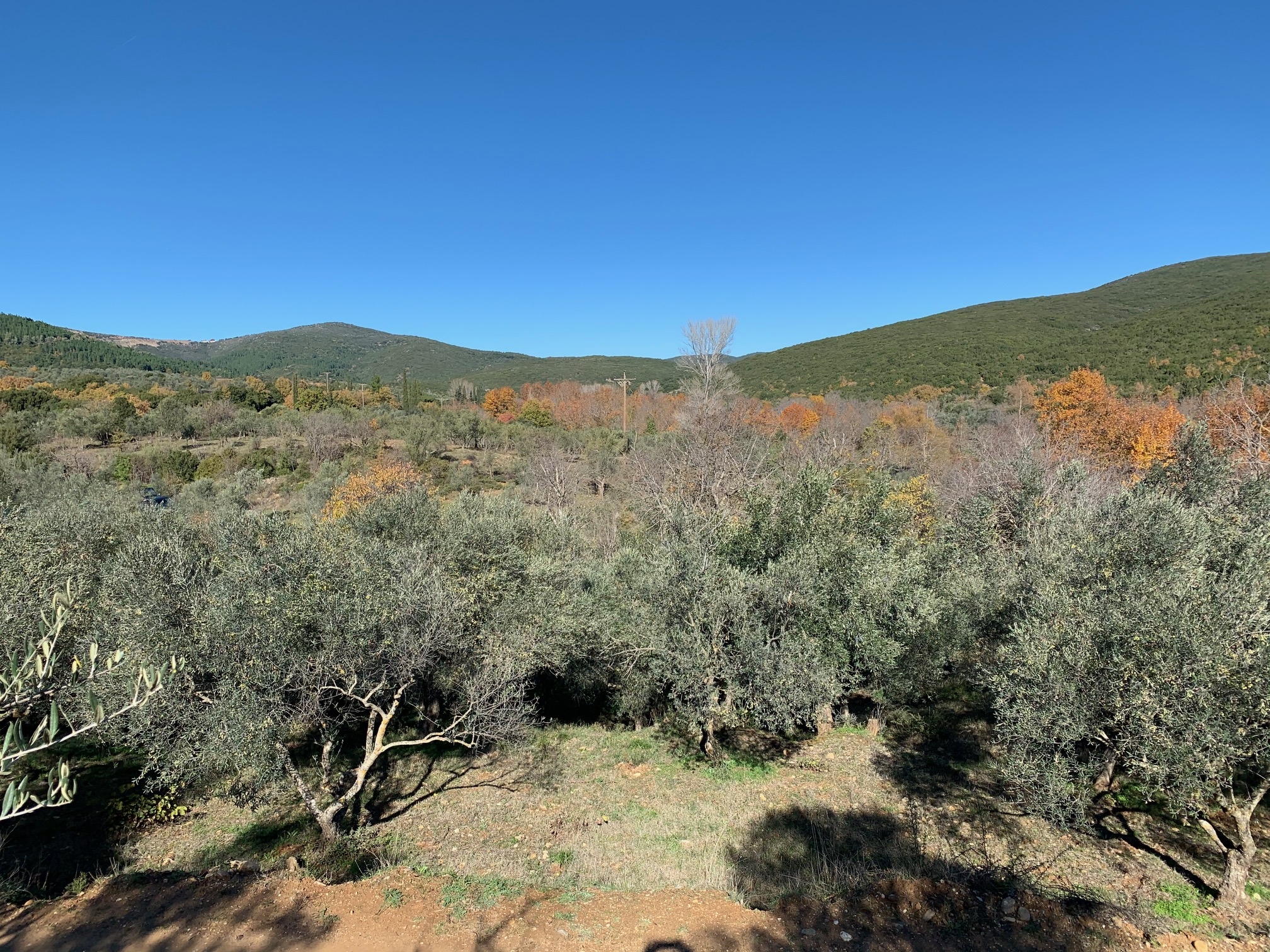 The valley north of Tourles, thickly grown with olive trees now, where the Spartan left was flanked and destroyed.

Tomorrow, I take my ‘day off,’ touring Sparta instead of mapping battlefields. Then, I’ll head on to the final battle of this trip – Pylos and Sphacteria on the southwest coast of the Peloponnese.

If you're following along with Myke, catch up on his last blog posts here: