Reality's Edge is a cyberpunk skirmish wargame written by Joseph McGuire. On this blog he gives a little more insight into what you can expect from the game when it hits the shelves in August!

Greetings Sprawlers.  Over the last couple of days, I have received several questions about what kind of models are needed/required for Reality’s Edge.  Since model collecting can take time, I thought it would be prudent to tackle this discussion before the book is released. 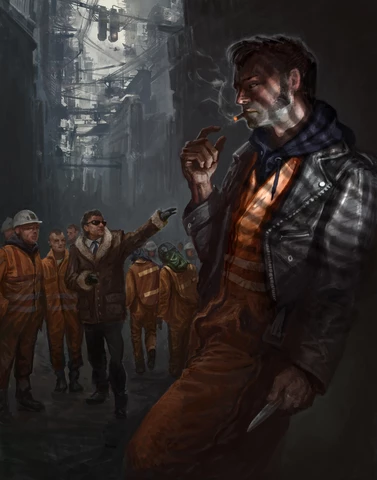 The most important models you will need for Reality’s Edge will be your crew.  A crew consists of your Showrunner, 2-5 operatives, and your shadow backer avatar.  Your Showrunner has a lot of options to choose from, so we will address them later in a separate blog, but since they must start as a normal operative before being given all their cool stuff, the operative descriptions apply to them as well.  Reality’s Edge has 10 different operative types. These are:

Recommended Models – Anything with a computer or headphones/googles to represent their computer deck.

Recommended Models – Anything vaguely robotic is fine.  Heavy cyborgs can use a larger base-size and may be armed with chain guns and other heavy weapons.  Light cyborgs can appear mostly human, so any cool model works.

Drone Jockey – Drone controllers.  They can also choose an accompanying drone with options for quadrupeds or helo-drones.

Recommended Models - Similar to console cowboys, any model holding a remote controller or computer to represent their ability to control their robot pets. For their drones, any robotic animal or four-legged robot will work fine. Helo-drones can be anything appropriate that flies.  Fun options can be found in sci-fi vehicles in the smaller scales.

Recommended Models – Open ended.  Any suitably impressive and/or intimidating model carrying a weapon of choice is appropriate.  This the only model short of the heavy cyborg that can take light machine guns and other support weapons.

Ganger – Low-level street punks.  You can take two for only one operative slot.

Recommended Models – Gangers tend to be throw away operatives, so armed with pistols, SMG’s, and melee weapons.  Classic tropes include punk style models with leather jackets and Mohawks.  However, classy crews could use models in suits and ties to represent gangers as well.

Infiltrator – Cyber ninjas that can focus on stealth and rudimentary hacking.

Recommended Models – Any suitable model that look like it blends in with the shadows or its surroundings.  Classic ninja type models would be useful here.  Since they can hack, they may also be modeled with a computer as well.

Recommended Models – This is another open-ended option.  Masques blend into crowds, so can look like any man or woman dressed in casual clothes or business wear.  Could also wear a body suit to represent technology that can shift their appearance.

Recommended Models – Any classic model carrying a medical kit or case.  They are the only operative that can take a collapsible staff, so that is fun conversion option.

Recommend Models – Like the enforcer, any suitably armed and intimidating model works here.  They traditionally take both melee weapons and ranged weapons, but can focus on either if they wish.  Katanas and SMG’s are a trope classic.

Tracers – Fast movers. Fastest models in the game without cybernetics.

Recommend Models – Open-ended, but any lightly armed model in a running position or equipped with leg cybernetics.  Since they know Parkour, can be converted to be mounting a wall or other terrain feature.

Shadow Backer Avatar – The digital representative of the crew’s secret backer.  Can only have one.

Recommend Models – The avatar is a virtual ghost-like model so should look fundamentally different than the rest of your crew.  Options include using a miniatures cast or printed in a translucent or clear material or a normal model painted in high contrast bright colors to represent their electronic forms.  During playtesting, I used these from Arck Knight.

Recommended Models – The same recommendations from the shadow backer avatar apply here, though sprites tend to significantly less powerful, so a smaller size model is appropriate.

The Sprawl is full of random passerbys and trouble makers.  The following is a list of potential NPC’s that “could” appear in your game.  This is dependent on any special mission rules and the like.  Note that some models are included that are not actually used by any current game rules, but are included in case folks want to include them in their custom missions or games. Because of the number of models involved, I list what the model does in game and players are free to choose a model that fits that them.

CORPSEC Riot Control Grunt – As the CORPSEC grunt, but armed with a riot shield and baton.

CORPSEC Officer – Leader of the grunts.  Can take better weapons.

Criminal Enforcer – Leader of a group of criminals.  Pack better weaponry than the thugs.

Dog (Rabid) – Dangerous dog that has no fear for its safety.

Exo-Frame Pilot – Mounted in a heavy exo-frame (large mobile armored suit). The exo-frame is equipped with variety of heavy and light ranged weaponry.

Ganger Champion – Leader of a group of punks.  Better armed.

Ganger Punks – Identical to the ganger operative in looks.

Hallucinating Junkie – Disheveled model that roams about the board causing trouble.

Holo-Stringer – Reporter for a media source.  Usually in business wear and lightly armed.

Mnemonic Courier – Classic trope of a model in a black suit and tie.  Armed with a melee weapon and SMG.

Poison Roaches – Swarm of icky bugs on a single large base.

Protestors – Random bystanders that get in the way.  Armed with signs.

Rampaging Cyborg – Can either be light or heavy.  Same aesthetics as the cyborg operative.

Rent-a-cop – Private security armed with a pistol or SMG.

Runaway Robot – Robot trying to get to safety.  Lightly armed.

Scavenger Ghoul – Model that loots bodies of their cybernetics.  Armed with a large knife or blade.

Security Turrets – Ranged weapon mounted in an armored housing.  Can be heavy or light.

Sprawl Rats – Large rats mounted one to a base.

Thrill Killer – Hunters looking for challenging models to kill.  Armed with heavy cybernetics and weaponry.  Similar aesthetics to the ronin.

ZZZombie – A sleep walker still hooked up to a set of virtual goggles or other large gaming system.

Well that’s it for now.  On the next blog I will break down the mechanics of Reality’s Edge and the difference between it and This Is Not a Test.  Remember you can preorder a copy of the rules here.

You can also learn more about me and This Is Not a Test here.