Reality's Edge is a cyberpunk skirmish wargame written by Joseph McGuire. On the blog today he looks at the mechanics in a little more detail.

Greetings Sprawlers.  As promised earlier, I thought we should dive into the mechanics of the game and how they are different that those that run This Is Not a Test (TNT). If you have not familiar with This Is Not a Test, I suggest you jump here and give those totally free demo rules a quick read. 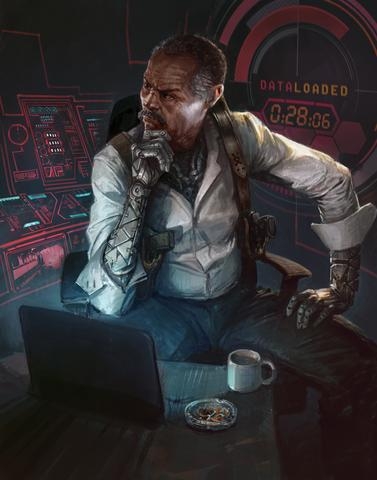 Reality’s Edge uses about 80% of the TNT engine.  It’s D10, and the occasional D6, based with the result of a die being added to the relevant stat, hoping for a total result of 10 or higher to be successful.  Activation Tests remain the same, with a success meaning the model gets two activations and that player continues to activate models until a test is failed or they run out of models. Failure of the test just means that the model only gets one action and play is passed to the next player, with play passing back and forth during the same turn until all models have activated.  Those familiar with TNT will have a good start on learning how to play Reality’s Edge.  But of course there are some modest differences:

Models have two new stats.  First is Hit Points (HP). In This Is Not a Test a model has one or more “wounds”, with most having one.  If a model is wounded, they are dead.  This was done because in a game with up to forty potential models on the table, we needed to keep things simple.  Either a model was dead or not; except for a few instances of powerful or heroic miniatures.

In Reality’s Edge, with fewer models on the table, we can track the differences between a simple flesh wound and the full impact of a shotgun blast.  Models are still wounded the same as in TNT, with a roll of Strength versus Defense, but instead of losing a single wound or dying, they suffer an amount of damage equal to half the Strength of the hit (rounded up).  Most models have 8 wounds. r A pistol hits for three points of damage, where a shotgun blast at close range would do a whopping 5.  There are also numerous skills and weapon rules which allow additional damage to stack. For instance, long blades, swords, etc., do an extra point of damage should an attacker roll a Critical (a natural 10 on a D10).

The second new stat is Firewall, which is a model’s protection against cyber attacks.  Every model has a Firewall stat.  Cyber warfare will be talked about more in depth in a future developer blog, but it’s hard to downplay how important this stat is.  For most models, the only protection their equipment, of if they are a drone or robot, their very selves, has against being disable, controlled, or even bricked  is their Firewall stat.  Firewall works exactly like a Defense stat, but it can be more dynamic as various offensive and defensive applications can cause it to go up and down during gameplay.

Another small change is that the Range stat has been changed to Aim.  Many folks noted that having the Range stat could be confusing when talking about ranged attacks in general, so the decision was made to change the name to make things a bit clearer.  Not a big deal change mind you, but it’s worth noting.

Another benefit with few models is that there is room to play with additional critical effects.  One such benefit is that should any model roll a Critical during an Activation Test, they receive an additional action point for free. This has the ability to throw a monkey wrench into a plan or make a longshot tactic miraculously work.  Just think of all those times you needed just one more action to take a swing at a tougher enemy or need just a little bit more movement to get to cover, now Lady Luck may give it to you.

Movement and Board Size

Games of This Is Not a Test are played on a 4’ square board, but Reality’s Edge reduces this to 3’ to get to the action quicker.  However, models are also not as fast as they are in TNT, where a model could always move their full Move stat in inches for every Action Point spent.  Instead, to represent the wet and crowded streets of the Sprawl, a model may only move their full Move stat the first time they move.  On a second move, they only move up to D6 inches.  And on a third move, which can happen, they move up to D3.  Models can still be fast, especially with cybernetics, just not super-fast as they can be in the open areas of the wastelands.

Perhaps one of the biggest changes is that models can now hide. The Sprawl is full of dark corners and specialist gear can foil the eye, so Reality’s Edge introduces a rule that allows a model to hide for the cost of one Action Point and the requirement they do so while out of line of sight of enemy models. As long as a model remains in cover, moves slowly, and avoids making any type of attack, they cannot be targeted by enemy ranged attacks.

Luckily, models can always to attempt to spot hidden models.  To do so, they must spend 1 Action Point and make a Spot Test.  They may also only attempt to spot models up to double their Mettle stat in inches, which for most models is 10”.

Range combat remains mostly the same, but introduces a few new rules.  The first is the point-blank rule.  Should a model fire at a model that is 6” or less away from them, they receive a +1 bonus to hit.  This is to encourage models to get up close and personal.

Second, models can now shoot walls. While in most cases this is unrealistic, but with the advent of various hacking applications and specialist equipment, operatives have ways of getting line of sight on a model they could otherwise not physically see.  If this occurs, they are allowed to fire through a single piece of linear terrain, such as a wall.  Of course, this reduces the velocity of the attack, meaning it does less damage to the target, but it is  a very useful tactic against tough or cagey enemies.

While this was addressed in a later supplement for TNT, Reality’s Edge starts with the option for crews to bail during a game from the start. If a game is going south, a player may simply pack up his things and go at the start of any turn by removing all their models.  A player that withdraws may keep any spoils they have earned, but the opposing player is assumed to have won the scenario and keeps any spoils that have yet to be claimed.

In This Is Not a Test, models could carry an infinite amount of weapons, but could only use two one-handed weapons or a single two-handed weapon at one time.  They had to spend an Action Point to swap items out.  Of course, during game play many  players, your humble author included, would forget about this restriction and just swap out willy-nilly.  Reality’s Edge does away with this rule. Instead, models are assumed to have any number of items tucked away in easy to access pockets or attached to convenient webbing.  As such, a model can freely use any item they carry at any time.

However, a model is now limited to how much they carry by their number of slots.  Each operative type can has only so many slots.  Combat oriented operatives like enforcers and ronin have more, but support characters like console cowboys and street docs have less.  Small items like pistols and melee weapons may only take up 1 slot, where support weapons and larger items take 2 or more.

Lastly, concealability of items is important too.  Should a model try to blend into a crowd, which will be discussed in a future developer blog, a model is going to have a tough time if they are carrying a huge sword and covered in heavy armor.  Finally, the same holds true if the model has to deal with CORPSEC officers, for instance, if they get arrested and have to make bail. Getting caught with banned weapons and items can ratchet up any potential fines and/or jail time.

Well that’s it for now.  In the next blog, I will discuss NPC’s and how civilians can get in your way.

Excited to see how your gang does in the Sprawl?  Preorder your copy of Reality's Edge today!