In September 1944, Field Marshal Montgomery planned to capture key bridges that would be the required conquests for the final push into Germany, perhaps ending the war in Europe by Christmas. Operation Market-Garden was launched on 17th September to fulfil that aim, and continued till 25 September 1944, when the remaining forces retreated. 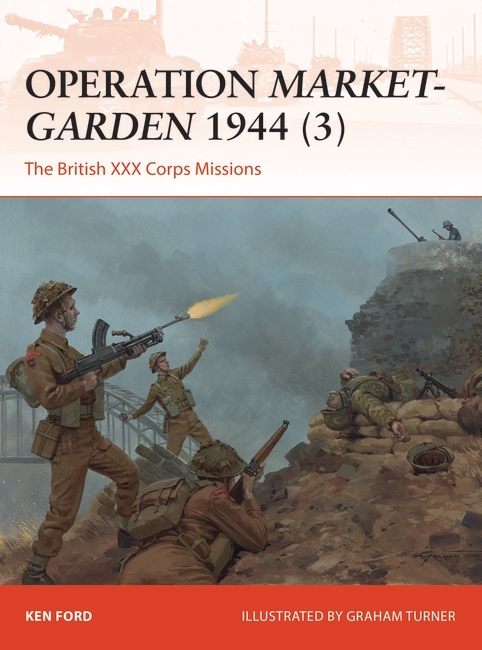 Operation Garden was nearing its end. The long salient that had been thrust 100km (60 miles) into enemy territory did not signal the start of the end of the war that it was hoped to be. All along the route, from Joe’s Bridge to the Lower Rhine, the enemy was in contact with the entire British force. ‘Club’ Route was vulnerable from an enemy that was growing in strength each day, as more and more formations from Zangen’s 15. Armee that had escaped across the Scheldt were fed into the battle. To the east, scratch formations were being raised inside Germany and fed westwards to hit the forces of Operation Market-Garden on their eastern flank. Three British corps were in contact with the enemy, all moving northwards through the Netherlands towards the Lower Rhine where their way would be well and truly blocked.

With evacuation now the main priority, Horrocks issued new orders to the 43rd (Wessex) Division. Thomas was told to continue with his plan for the relief of the airborne division, complete the capture of Elst, hold the corps’ east flank from Elst to the Lower Rhine, protect the west flank from the Rhine back to the river Waal and hold one brigade and an armoured regiment in reserve. The Guards Armoured Division would hold the right flank from the Waal up to Elst and continue with the aid of the 69th Brigade.

The day did not pass peacefully for the 43rd (Wessex) Division as it arranged for the night’s evacuation of Urquhart’s airborne formation. Across the river, the enemy continued shelling and mortaring not only the airborne perimeter but also the area around Driel where the preparations were being made. Lanes lined by white tape were laid down to the riverbank at two crossing sites opposite the airborne perimeter. Transport and medical facilities were brought forward to receive and then transfer exhausted paratroops away from the river to reception centres in the rear. To throw the Germans off guard, a very noisy simulated attack was to take place downstream to coincide with the evacuation, in order to deceive the enemy into thinking that an assault crossing was to be made there. The actual crossings were to be supported by all the available guns of XXX Corps, as well as the 43rd (Wessex) Division’s own artillery, mortars and machine guns, which would hopefully mislead the enemy into thinking that the airborne lodgement was being reinforced.

At 1030hrs that morning, Maj. Gen. Urquhart approved the plan for Operation Berlin and signalled Thomas to go ahead with the arrangements. Four field companies of engineers would carry out the task of ferrying survivors back across the river, two from 43rd (Wessex) Division and two Canadian units. Two crossing places were allocated, each a mile apart. Both sites were provided with 16 assault boats and 21 storm boats. The assault boats were rather flimsy wood and canvas powered by paddle, whilst the storm boats were much larger wood and plywood craft, each powered by an Evinrude outboard motor. These boats were heavy and cumbersome to manoeuvre – it took a whole platoon of men to carry each one down to the water’s edge. There were also three DUKWs available for the exercise, but their employment in the shallow muddy water close to the shore left their effectiveness in doubt. The 43rd (Wessex) Division’s Royal Engineers had the task of organizing the evacuation under the command of their Commander Royal Engineers (CRE) Lt. Col. Henniker.

When the time came for the evacuation to begin, there had still been no news about the fate of the 4th Dorsets. The night was dark with heavy rain and strong wind, which, in part, helped to shield the activities on the river from the enemy. However, the intensity of the barrage and the volume of small arms and mortar fire from the Wessex Division left the Germans in no doubt that something significant was taking place.

Many individual acts of heroism and much solid determination marked the to and fro of craft across the river that night. The Germans subjected the area to intense mortaring and machine-gun fire. Some boats were hit by enemy fire, some got into trouble and tipped their occupants into the river while others made the hazardous crossing successfully and immediately turned around to go back and carry another load of men to safety. The process was time consuming and hazardous. By the end of the night, 2,163 airborne troops, 160 Poles and 75 men of the 4th Dorsets had been carried back across the river.

With the demise of British 1st Airborne Division and the evacuation from its unhappy battlefield after nine days of heroic defiance, the Market-Garden offensive came to a halt. XXX Corps now switched from offence into defence. Continual interruptions to the main axis had interfered with the normal supply of ammunition and stores, leaving the 43rd (Wessex) Division and other formations short of what was needed to continue their struggle against the enemy. The units in the line were in positions not of their own choosing, called upon to mount a defence against an enemy that was growing in strength daily. Their great salient, carved out against a determined enemy, was a road to nowhere. It was a sad end to what had been seen as a great enterprise just nine days before.

To find out more, order your copy of Operation Market-Garden 1944 (3)