The Battle of Kulikovo's origin lies in the Mongols' conquest of the divided principalities and city states of the Rus' in the 13th century. As the famed 'Mongol Yoke' loosened, Grand Prince Dimitri of Moscow saw an opportunity to rebel. On 7 September 1380, his 60,000 troops crossed the Don to take the battle to Mamai's 125,000.

In today's blog post, Kulikovo 1380 author, Mark Galeotti, writes about how this relatively unknown battle to the west has become mythologised in Russia and utilised for political purposes, telling the story of how a daring Russian force defeated the military superpower of the day.

Many battles become myths, and often the mythmaking begins even before the last shot is fired or the last casualty buried. Some – from Agincourt and Gettysburg to Stalingrad and Thermopylae – become especially powerful as symbols of a nation, a movement, or an era. The battle of Kulikovo, fought in 1380 between an alliance of Russian principalities under Moscow’s Prince Dmitry, and the forces commanded by Mongol-Tatar potentate Mamai, may not be especially well-known in the West, but has over the years become successively more central to a legitimating myth begun by the princes of Moscow and since adopted by Vladimir Putin.

Go to the glitzy, high-tech Rossiya – moya istoriya (‘Russia – my history’) pavilion in Moscow’s Economic Achievements Exhibition park, and you’ll be treated to a version of history that draws a very simple, straight line. Russia was divided, and so it was vulnerable to the Mongol invasion which conquered it in the thirteenth century. At Kulikovo, Russians came together and so could break the power of the Mongol ‘Golden Horde’ and begin to create a strong, unified state. Moscow led that effort, and Moscow is thus, as it has always been, the beating heart and keen mind of Russia. 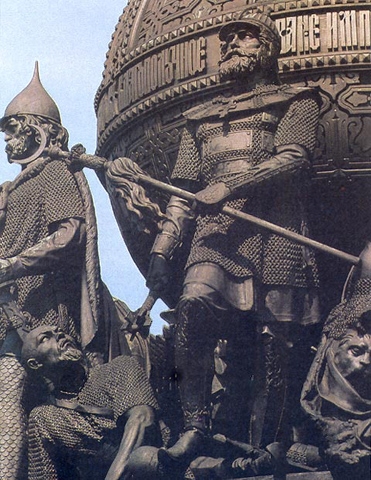 To be sure, the fact that Russia was an archipelago of often-feuding principalities when the Mongols came hardly helped, with city-states generally submitting or being razed one by one. However, it is unlikely that even a unified Russia could have resisted the Mongols at the peak of their power. Rather, more cities would have suffered the fate of Kiev, sacked and burned, its fields scattered with the bones of its people.

More to the point, before Moscow gets the credit for being the champion of Russian nationalism, it is worth wondering just how what had been an insignificant township before the Mongols came was able to become the hub of the Rus’ peoples. The answer is that its Ryurikid dynasty, making up with cunning and efficiency what they lacked in power and money, became in many ways the Mongols’ chief quislings, the Russians willing to collect the taxes and police the principalities in the name of the khans. The Mongols, after all, saw themselves as conquerors, not administrators, and so long as the princes paid homage to them, and the silver kept flowing to their capital at Sarai, were happy to let the Ryurikids prosper as their agents.

Over time, Moscow would extend its authority amongst the Russian principalities, and the Mongol-Tatar star would begin to wane. Arguably Prince Dmitry’s real brilliance was to spot the moment when the conquerors were divided and in decline and launch a rebellion that was intended as much as anything else to reinvent Moscow: what had been the capital of collaboration would become the vanguard of patriotic revival.

Prince Dmitry was as able a politician as a strategist. He assembled an army of allies and clients and brought chroniclers with him, as well as foreign merchants, who would be able to spread the news of his victory. And after that victory, everyone from other princes to the Russian Church was eager to get in on it, to present it as a titanic clash, a civilizational collision, a divine triumph of piety over paganism.

And so the story grew. That more than half a million soldiers clashed at Kulikovo (that would have virtually depopulated urban Russia). That the power of the Golden Horde was broken that day. That angels turned the tide of battle for the Russians. That Dmitry himself fell exhausted, surrounded by the bodies of Mongol-Tatar warriors he had killed. 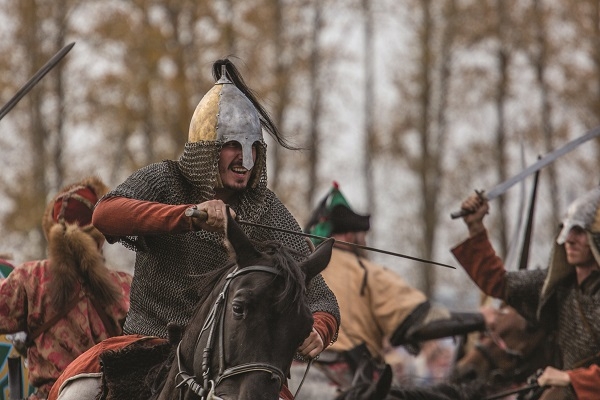 Russian cavalryman, from 2015 re-enactment of the battle at its original site
© Petr Shelomovskiy

But where did the stories end and real history begin? What made working on this book at times exasperating and at times especially fascinating was the detective work involved, sorting through centuries of (largely Russian) chronicles, and the successive layers of myth and misunderstanding they embodied, and triangulating them against other accounts, archaeological evidence, and downright common sense.

Was there even a battle? There is a battle site, now marked with a striking museum, but time and human activity have left little of the woods that were so crucial in determining the course of the battle. Acidic soils, generations of looting, and extensive farming using corrosive fertilisers in the Soviet era left few archaeological finds as proof. Thus there have been all kinds of theories, from the plausible to the nonsensical, ranging from the suggestion that the battle never happened, to ingeniously bizarre speculation that places the entire campaign within Moscow city limits, not 300 kilometres to the south.

Nonetheless, it is possible to correlate accounts of the time with the geography, and more finds were discovered to the south, where so many of Mamai’s men drowned trying to force the river Mecha when they were routed. It is not always so easy piecing through centuries of chronicles, most written by churchmen with no military knowledge and more interested in finding improving religious parallels. At the same time, though, one cannot ignore accounts written decades, even centuries later, as some were likely based on lost contemporary ones, or the oral histories of men who fought there.

But what emerges is a story that is in many ways much more interesting than the simplistic official line. Dmitry’s forces were mainly Russians, although they included some allied Lithuanians and even some Russified Tatars. Several Russian principalities refused to join him, though, mistrusting his motives or his chances. Against them, Mamai assembled a force of Mongol-Tatars but also all kinds of allies and tributaries, from Armenian archers to Genoese mercenaries hired from their trading ports in Crimea. He was also expecting troops from Lithuania and from the Russian city-state of Ryazan, neither of which arrived in time for the battle. This was not a straightforward battle of Russians versus Mongols.

As it was, it was a terribly close-run and bloody battle, one Dmitry would likely have lost were Mamai a better general and he a less cunning commander. By hiding some of his best heavy cavalry in a wood to the flank of the battlefield, he was able to turn imminent disaster into victory at the eleventh hour. Mamai was able to flee but was later murdered by the Genoese, both to appease his successor and avenge the way he bought his escape with the lives of his Genoese bodyguards.

Even so, this was not the end of Mongol rule. Mamai’s rival and successor, Tokhtamysh, would launch a punitive invasion in 1382 that would see Moscow burned and Dmitry forced to reaffirm his allegiance. The Russians would have to continue to pay homage off and on for another century. But the myth of Russians united, throwing off the ‘Mongol Yoke’ against terrible odds, proved irresistible, and Dmitry – who acquired the epithet Donskoi, ‘of the Don’, to celebrate his victory – and his successors used it to the fullest, not least to wipe away the memory of their previous collaboration.

Through history, the layers of mythology have accumulated. In the First World War, tsarist Russia mobilised it to try and inspire a war-weary people to unite and fight. More recently, Kulikovo has become part of Vladimir Putin’s campaign to assert Russia’s historical claims to great power status. An official school textbook adopted in 2013 says this was when ’the light of freedom began to dawn‘ as ’victory on the field of Kulikovo roused the national awareness of the Russian people.’ The church has also got into the act: Prince Dmitry was made a saint, and in 2005, Alexy II, Patriarch of Moscow, declared a jubilee year to commemorate the 625th anniversary of Kulikovo, which he called the battle that ’saved the nations of Europe by shielding them from the threat of foreign invasion.’ With the largest submarine in active service anywhere in the world being the nuclear missile boat the TK-208 Dmitry Donskoy, with the 51st Guards Airborne Regiment of Russia’s 106th Air Assault Division being named for the prince, too, and with an elite commando unit of the National Guard being named after Peresvet, a warrior-monk champion meant to have led his army into battle, it is clear that even if the real history of the battle is arguably more exciting and interesting, the official version is very much in control in Russia.

To read more on this fascinating topic, pre-order your copy of Kulikovo 1380, publishing 21 February.