Today on the blog we are joined by Peter E. Davies, author of Northrop Flying Wings, who explores the origins of the flying wings and the work of aircraft designer Jack Northrop.

There can be few more awe-inspiring sights in the skies than the black, bat-wing shape of a Northrop Grumman B-2A bomber. Seventy years ago, Northrop’s first flying wing bomber, with a broadly similar appearance, elicited even more public amazement. It seemed to belong to a futuristic scenario like the science-fiction film War of the Worlds, in which it later appeared. With a wingspan that was coincidentally the same as the B-2A’s, a top speed only 50mph slower but with only half the engine power, Northrop’s YB-49 pioneered concepts which are now accepted as fundamental for low-drag, stealthy aircraft. For Northrop, the fact that his bomber was stealthy was an unexpected bonus at a time when radar was still a comparatively recent invention.

For most of the 116 years since the Wright Brothers brought heavier-than-air flight to the world our conventional image of an aircraft usually includes a fuselage, a wing (or two) and a tail unit. In fact, in its earliest days – extending back to the 15th century – those who attempted to design aircraft envisaged machines that imitated birds or bats. Although early efforts to simulate flapping wings were short-lived, the concept of a wing-based vehicle with minimal body mass and little or no tail persisted into the 19th century. Visionary scientists like Sir George Cayley, Otto Lilienthal and Alphonse Pénaud conceived bird-like gliders. By the early 20th century designers including John Dunne and René Arnoux were adding early combustion engines to tailless projects and similar initiatives were under way in England, Russia, Germany and France in the 1920s. However, these projects were generally seen as somewhat eccentric diversions from the mainstream of aircraft design. Today we can see in them the origins of air vehicles whose appearance will become increasingly conventional in the 21st century.

In the 1930s a series of German aeronautical engineers took the flying wing concept beyond the novelty stage and began to influence established designers elsewhere. Alexander Lippisch built his Delta V monoplane in 1937 and he used that experience to work on the Me 163 tailless rocket fighter of World War II. Reimar and Walter Horten produced tailless creations in 1933–34. By 1944 they incorporated newly-invented jet engines into their Ho 229 flying wing fighter which, like the Me 163, might have been developed into an effective warplane if the war had continued. So would several other all-wing bomber and fighter designs on German drawing boards in 1945, many of which were taken to the USA and Russia at the end of the war for close study.

The flying wing idea had already aroused interest in the USA in the early 1940s. Boeing’s B-17 bomber was preceded by the Model 306 (XB-15 derivative) with an all-wing basis. In 1941 Consolidated Vultee sketched a huge, all-wing alternative to their B-36 Peacemaker with a wingspan of 288ft and sufficient range to bomb Germany from continental US bases. Those designs gave way to conventional formats but one designer persisted with the tailless philosophy. In 1939 John Knudsen Northrop, whose aeronautical training was confined to practical car mechanics and making models to simulate the flight of seabirds, created the first of the tailless aircraft which were to become his main contribution to aviation history, despite the many setbacks he would face in promoting the concept.

He acquired aircraft building skills while working on the earliest Lockheed ventures, and in 1923 Northrop also contributed design ideas to Charles Lindbergh’s Spirit of St Louis monoplane and the successful Lockheed Vega series. Six years later he had his own company and his first flying wing, the Avion Model 1, was built, which pioneered stressed-skin wing construction. The 1930s brought turbulent changes to his business arrangements with other companies, including a takeover by Douglas Aircraft which prevented him from pursuing his flying-wing ambition for ten years. 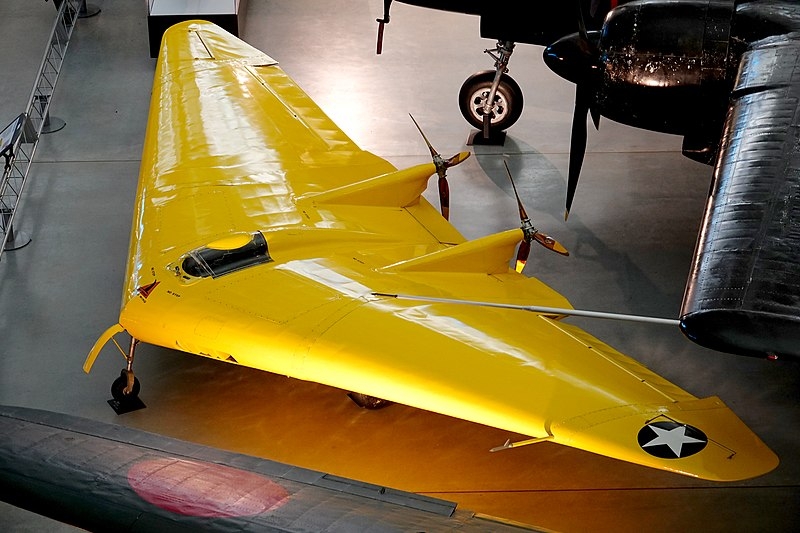 His third company, set up in 1939 as Northrop Aircraft, Inc. enabled him to build the first purely Northrop flying wing, the little N-1M. Powered by small twin piston engines, it could be used to test modifications to its all-wing format, its wing-tip ‘drag rudders’ in place of a conventional tail, and a shape which was actually inspired by the curved, wing-shaped Zanonia seed from Australia, known for its excellent gliding properties. Gradually Northrop, a quietly persistent spirit, involved important research scientists like Dr Theodore von Kármán in wind-tunnel testing which demonstrated the efficiency of the flying wing in reducing drag and extending range. Funded by wartime contract work on other military aircraft Northrop began work on his N-2B/XP-56 tailless fighter and XP-79 rocket-powered all-wing interceptor at a time when the need for new high-performance combat aircraft opened the way to many adventurous designs. Both involved highly innovative design features such as an engine with two ‘pusher’ contra-rotating propellers and for the XP-79 a prone pilot cockpit and four-skid undercarriage. Sadly, although both had promising characteristics they exhibited control problems that caused accidents which ended their development prospects.

In the same atmosphere of wartime pressure Northrop also saw that his basic concept could be used to build a long-range bomber capable of attacking Germany from the USA. Although that contract went to Consolidated for their B-36, Northrop impressed the USAAF with his proposal for a faster, simpler flying wing bomber: the XB-35. Preceded by a one-third-scale proof of concept N-9M with two ‘pusher’ piston engines, the futuristic XB-35 spanned 172ft and used contra-rotating propellers on four R-4360 radial engines to carry 2,000lbs of bombs for up to 8,000 miles. Sadly, the ‘monster new bat bomber’ was plagued by frustrating gearbox and transmission problems that delayed its development so much that the hoped-for contract for 200 aircraft was cancelled in the more austere post-war climate. Although the benefits of the flying wing in terms of handling, capacity and speed were evident the aircraft needed an autopilot to improve its lateral stability and far better engines to meet the USAAF’s performance requirements.

Jack Northrop then turned to the then-new technology of jet propulsion to provide reliability and increase speed. Although the aircraft, re-designated YB-49A, flew better, the thick wing of the basic design limited its speed, while the fuel-thirsty early jet engines reduced range. Although the USAF remained interested in bomber or reconnaissance versions its test pilots were not satisfied with the YB-49A’s stability or stalling behaviour. An accident during their tests killed a crew led by Capt. Glen Edwards (whose name was given posthumously to Edwards AFB). It was attributed, probably unfairly, to unacceptable stall-spin faults but it was followed by poor results in bombing trials (due mainly to the unavailability of a suitable auto-stabilization system) and a decline in USAF interest. 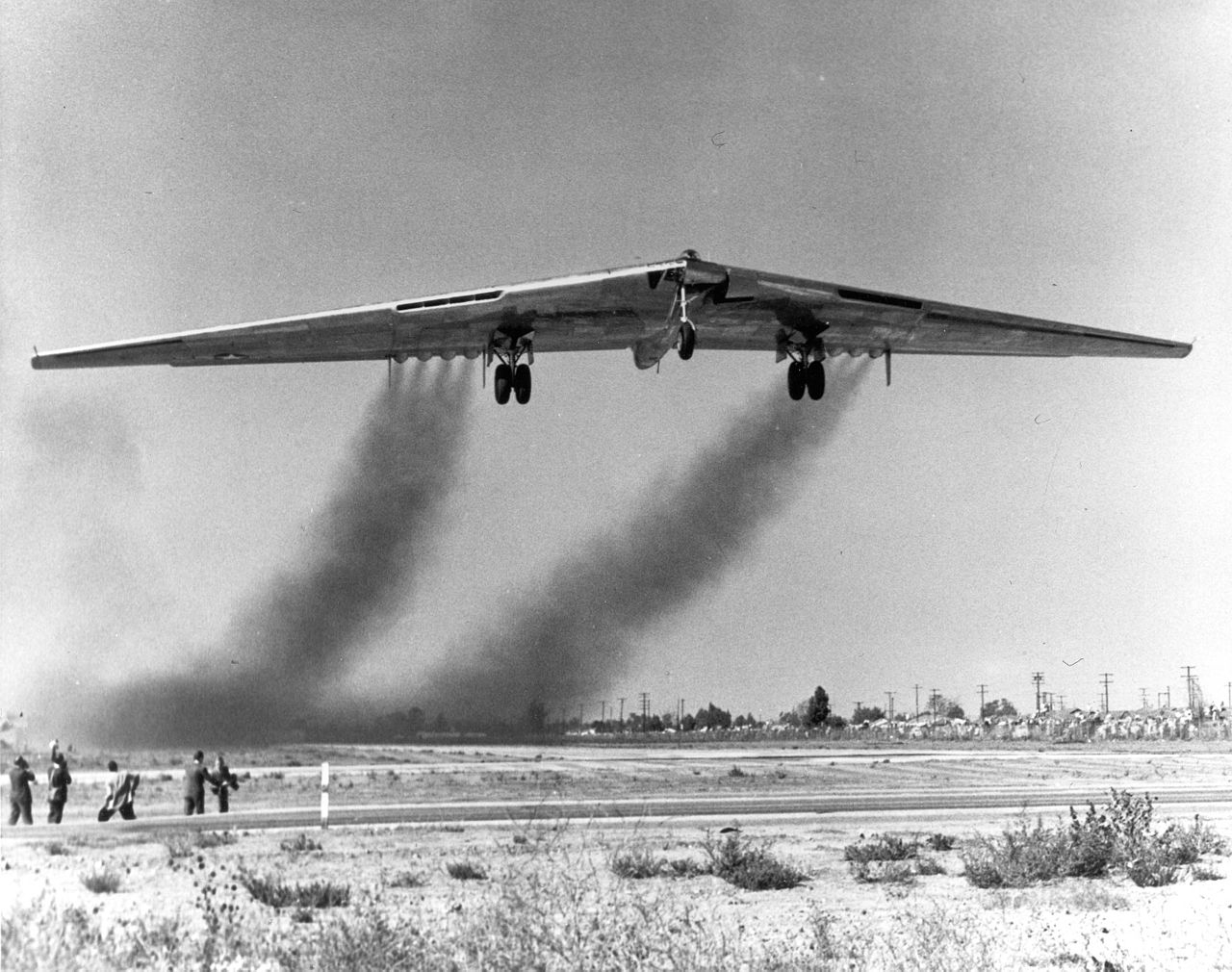 The YRB-49 takes to the skies for the first time

Northrop promoted several alternatives; a YRB-49A reconnaissance-bomber with external podded engines, a turboprop-powered version, a transport variant and another capable of carrying bombs externally, but the USAF turned to Boeing for its B-47 bomber, followed by the B-52. Northrop fought hard to find a niche for his design and the YB-49A performed some impressive demonstration flights but he was up against the basic conservatism of Strategic Air Command’s General Curtis LeMay. All B-49 work was included in the 1949 budget cuts and Northrop workers had to watch the line of uncompleted aircraft being cut up by salvage crews. Jack Northrop left the aircraft industry at the end of 1952.

Despite the commercial failure of his flying wing projects Jack Northrop remains an inspiring and sympathetic figure and one who was always ahead of his time. As a highly imaginative and innovative designer he has few parallels and he combined those qualities with quiet patience, strong principles and admirable devotion to his work-force. Sadly, he also lacked the aggressive business acumen and the good luck that his individual approach required in the highly competitive world of defence contracts. His conventional designs like the P-61 Black Widow were valuable but he will be remembered as the man who had the courage to follow his dream of building a better type of aircraft. He did at least live long enough to see that dream finally realized in the early work on Northrop’s B-2A Spirit bomber, made possible by Jack’s initiatives coupled with the computerized, auto-stabilized flying controls which were not available to him. Almost a century after his first vision of all-wing flight the wheel has apparently turned full circle, as the B-2 will be followed by the similar but more numerous B-21 Raider. Northrop’s influence continues in various forms in many designs for future manned and unmanned aircraft. The flying wing story is one of unprecedented innovation, unstinting work, frustration and tragedy – but eventual triumph.

Peter E Davies specializes in recent American combat and experimental aircraft and he has published over thirty books on those areas of aviation. He has written four previous books in the X-Planes series and the latest is on the revolutionary Northrop Flying Wings.