On the blog today, Thomas McKelvey Cleaver, author of MiG Alley: The US Air Force in Korea, 1950–53, recounts the heroic efforts of the Sabre fighter-bombers of the 18th Wing, which ultimately changed the final outcome of the war. 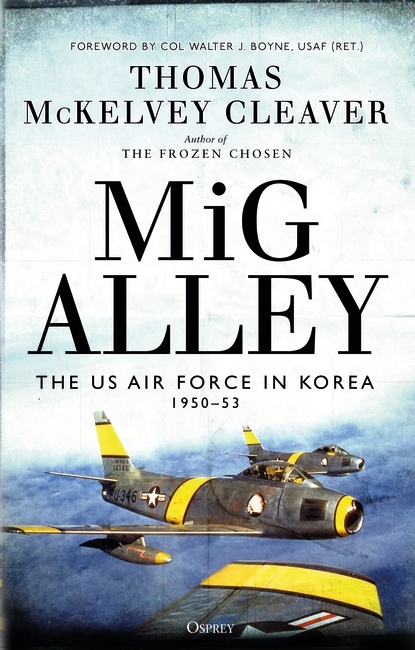 From the outset of the Korean War, American military leaders saw US airpower as the primary agent to prevent the Communists from overrunning the country during the first year’s war of movement, and later the sledgehammer that would break the obstinacy of their Communist opponents in the peace negotiations and bring about the end of the war. Unfortunately, throughout the war, this never happened. As Seventh Fleet commander Vice Admiral J.J. “Jocko” Clark put it, “the interdiction campaign didn’t interdict.”

In April 1953, the peace negotiations at Panmunjom recommenced after having been stalled for the previous 18 months. Intelligence learned that the Chinese hoped to go on the offensive in the summer, to change the “facts on the ground” and influence the outcome of the negotiations. Bombing sorties against the transportation system were increased in May and June, which resulted in the planned Chinese offensive being delayed until mid-June. With negotiations hanging up on the riots happening in South Korean prisoner of war camps and the decision by the South Koreans to allow the Communist prisoners to escape from the camps rather than forcibly repatriate them, the outcome of the war was on a knife-edge. The attack broke through Eighth Army’s defensive lines and threatened a breakthrough that could end with a third fall of Seoul. The UN army lacked the reserves to stop the Chinese and action was limited to closing the hole and blunting the enemy spearhead. A second Chinese attack aimed at Seoul and Inchon was expected any day.

On the night of July 15/16, 1953, the Sabre fighter-bombers of the 18th Wing took part in a mission that did affect the final outcome of the war, one that the Fifth Air Force would deny had ever happened until Major Flamm D. “Dee” Harper of the 18th Fighter Bomber Group told the story for the record in 1992.

Captain Harper had been shot down over North Korea and injured in his ejection three weeks earlier and was assigned a ground job as Group Operations Officer, which carried with it a spot promotion to Major. On July 15, 1953, with both 18th Wing commander Colonel Frank Perego, and 18th Group commander Colonel Maurice Martin attending a conference in Tokyo, Deputy Group Commander Lieutenant Colonel Glenn Stell was the acting group commander. By 1700 hours the wing had completed all missions Fifth Air Force’s Joint Operations Center had assigned.

Harper recalled, “Two flights were still north of the Main Line of Resistance, but at the Combat Operations Center, we were putting the day’s activities to bed. Lt Colonel Harry Evans, commander of 12th Squadron, who was leading a flight still north of the MLR, contacted us and said he had located about 100 enemy boxcars in a marshaling yard near the front. Everything they shot exploded, which indicated munitions! He also said another nearby marshaling yard was also loaded with boxcars and gave the map coordinates. We finally had a real target!

“Night was rapidly approaching and we were a day fighter outfit. I knew that by morning the munitions would be dispersed and this prime target would no longer exist. Instant action was required. While the duty officer relayed the scramble order and target data to our two alert flights, I contacted the duty officer at Fifth Air Force Headquarters. I told him the targets and stressed the need for immediate action, that I was launching our alert flights while he obtained the necessary authority. Considering the seriousness of the situation. I never once thought we may not receive such authority. The duty officer was also advised we would load all aircraft for immediate strikes.

“Within fifteen minutes we were ready to launch 16 aircraft. Again I contacted Fifth Air Force for authority, and was told that General Barcus, the commanding general, was at dinner, and they didn’t want to disturb him. Again, I told the duty officer we would launch the ready flight and would turn everything around upon landing to augment the force as rapidly as possible. He worked on the obtaining necessary authority.

“By now this was a major operation. Every organization on base was at maximum effort. I was the only one who knew none of this had been authorized by Fifth Air Force.

"We continued launching flights. The sun set. The squadron commanders told me that the fires in the targets were so bright our pilots could read their instruments by them.”

12th Squadron commander Evans later recalled, “The whole valley in the target area looked like daylight. We did not need maps or photos. We just headed north, and when we got to 6,000 feet, we could see the fires on the horizon.” 67th Squadron commander Lieutenant Colonel Carroll L. “Stan” Stanton, remembered, “When my flight arrived over the train, Harry’s was just leaving. It was now almost pitch dark. It was obvious we were setting ourselves up for a mid-air collision. That would have really ripped it! I took control and assigned holding quadrants, then called individual aircraft in and out of the target area. I’ve never seen a fireworks display that comes close to the show that night. Burning ammo flew thousands of feet into the air, and secondary explosions were everywhere!” As the night wore on, clouds moved in and pilots were logging 40 minutes of weather on each sortie. After several hours of sustained attacks, a C-47 with a forward air control team arrived to take charge.

Major Harper continued, “Due to the press of events. I had not advised Colonel Stell we lacked authority, a serious breach of command authority, because up to this time I had not considered Fifth Air Force approval to be a problem. In my mind, I knew approval was imminent. I was just busy doing my job hacking through the red tape. I continued contacting Fifth Air Force Headquarters for authority. At one point I requested they order me to stop or else obtain authority, but neither occurred! In my opinion, the response from the 18th had been so fast that after General Barcus completed dinner, no one wanted to tell him he’d missed the war! In my defense, we were striking the only real target I had seen during the seven months I was in combat. I was also aware that after going this far. I had better finish the job. I made the personal decision to remain silent. There was no need for anyone else to be open for court martial.”

Shortly after midnight, ground fire claimed two Sabres and one pilot was down in No Man’s Land. “Because of these losses, I knew our operation could not be swept under the carpet. We shut down shortly thereafter feeling assured our target had been destroyed. The 18th Fighter-Bomber Wing produced 212 sorties, of which 120 had not been authorized.”

Harper realized the upper echelons were upset at 0300 hours, when he saw an order to Colonels Perego and Martin to return to Fifth Air Force Headquarters immediately. “After the day’s events, I was totally exhausted and extremely shaken, considering that I was not in good physical shape to begin. With visions of a court martial and a possible sentence in Leavenworth, I went into shock prior to falling asleep.”

The next day, Colonel Martin walked into Harper’s office at 1430 hours. Harper was officially informed he would not be court-martialed, and would receive no citation. “After a considerable pause, Colonel Martin continued. ‘As Air Force officers we are all required to make decisions. Yesterday, you made the right decision. If you never make another decision, you have earned your pay for the rest of your career.’”

Following the destruction of the ammunition trains, the expected second assault failed to take place. The hope that airpower would change things had happened, but the Air Force couldn’t officially claim its victory because staff aides had been reluctant to interrupt General Barcus’ dinner to obtain proper bureaucratic approval of a one-time-only opportunity. Barcus, who had consistently “pushed the envelope” in an effort to achieve this result, would never claim his victory. The Sabres of the 18th Wing had literally saved the conclusion of the Korean War by stopping the planned Chinese attack in its tracks before it could begin. The armistice was signed ten days later.