Gaslands: Refuelled comes out in September, but here at Osprey Games HQ we couldn't wait. And so, without further ado, please let us introduce the Gaslands: Refuelled Chop Shop Challenge. Over the next few weeks we are going to be showing off our Gaslands creations, and we invite you all to do the same! If you want to show off your cars simply email us at [email protected] and include 'Chop Shop Challenge' in the subject, and we'll include it in our upcoming gallery of Gaslands awesomness! You can also share your creations on Twitter - just make sure you include #chopshopchallenge in your tweet!

We're starting off with a look at Phil's truck. This article was originally posted on his blog.

With the release of Gaslands: Refuelled just around the corner, the Osprey Games office is once again full of Hot Wheels cars, random components scavenged from various sources, and the smell of superglue. A challenge was leveled - build a Gaslands car from the selection that was already to hand. That was it. No rules, no prizes. It really should take more than this to spur our competitive streaks into full flight...

Well, I think my car is the first one finished, so I win on that score if no other... 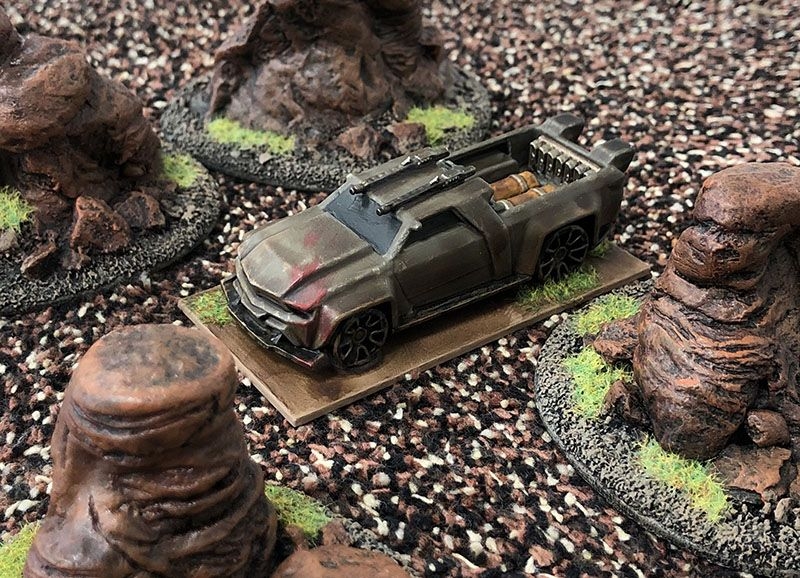 The underlying vehicle is a Hot Wheels Solid Muscle, which is described by the Hot Wheels Wiki as "a futuristic flatbed truck with what appears to be two nitrous tanks in the rear. The model has an adjustable front splitter."

First things first, the front splitter was rendered non-adjustable with the judicious application of superglue, as were the wheels. While Gaslands is really designed to be played with cars not mounted on bases, I prefer the look of based models and found some the perfect size from Renedra - just a little longer and wider than the car itself, but not so much that it interferes with measurements etc.

So, with the car in hand, I needed to figure out how to stat it up for Gaslands. It's obviously a truck of some kind, so I started with the Truck statline. This gave me a starting cost of 15 and 3 build slots to accommodate larger gear. The two tanks in the back of the truck are already intended to represent a nitrous system, but I don't really see myself (or a truck, for that matter) speeding to victory - gutting out a win by immobilizing the opposition is more my style. Flicking through the available weaponry, I lit up the Napalm Dropper... which does exactly what you'd expect. this is a pretty inexpensive, yet fun option that takes up 1 build slot. With one dropped weapon already equipped, I thought of Verney - a sponsor that specialises in dropped weapons. It's a perfect combination, and I furthered that synergy by adding a second dropped weapon - the Oil Slick Dropper (pricier than the Napalm Dropper, but 'free' in terms of build points). There are also two large exhausts on the Solid Muscle, presumably also for the nitrous system, but these take little effort to reinterpret as some form of weapon port.

At this stage, I had a decent rear-facing arsenal, and reckoned I could do with adding something to make me as dangerous to the vehicles ahead of me. Machine Guns are always a good option, so I took a couple of forward-facing ones to fill out the build point allowance. I could have spent a lot more time finessing and juggling different weapon options, but I wanted to skip to my favourite part of any project - kitbashing!

The long, flat roof of the cab looked perfect for the machine guns, so I raided my bitz box and found a couple of MG42s from Warlord Games' Bolt Action plastics. Clip off the stock, pistol grip, and that was it. I did consider mounting them on the bonnet, tucking them against the ridge, but I couldn't shake the impression that they looked to be shooting slightly downhill (the bonnet slopes very slightly) and the roof mounting offers a more interesting silhouette. I also found a random bit of plastic (maybe spare tank tracks? Ammo cases?) and glued it up against the exhausts to represent the Oil Slick Dropper. 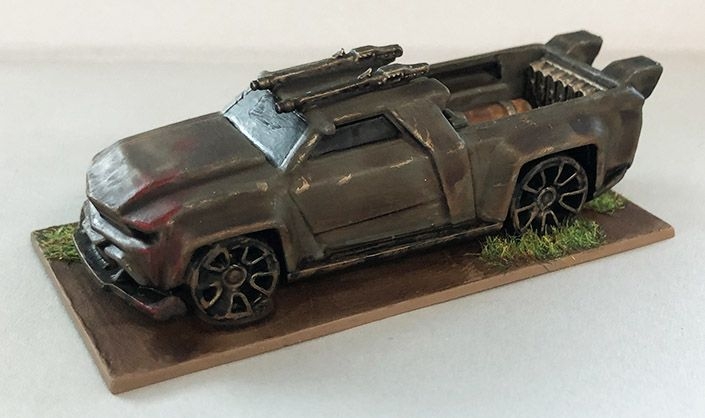 That done, the vehicle was pretty much ready to go, but I thought it needed just a little something extra. I snaffled a load of jerry cans (another Bolt Action find), and mounted them against the rear of the cab. It makes very little sense to store petrol right next to a napalm-based weapon, but, then again, it makes very little sense to engage in high speed death races... 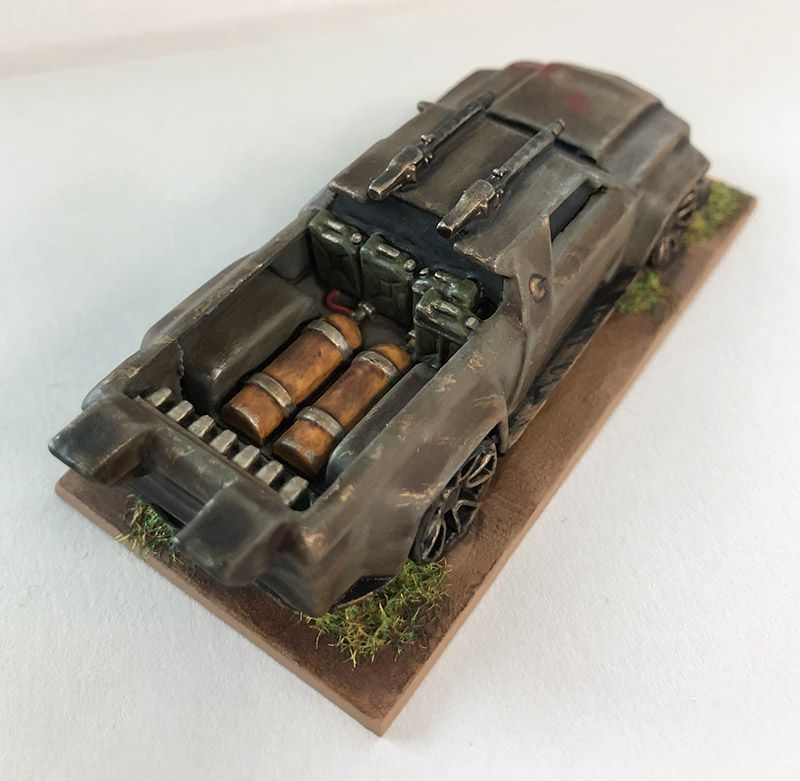 The painting was a doddle - grey basecoat, drybrush the edges with metal, then drybrush the lower areas with brown. Pick out the jerry cans in green, the napalm tanks in yellow (I considered the classic black-and-yellow stripes, but it was just a little more awkward than I cared for!), and a stray cable in red, then an all-over brown wash, and jobs's a good'un. 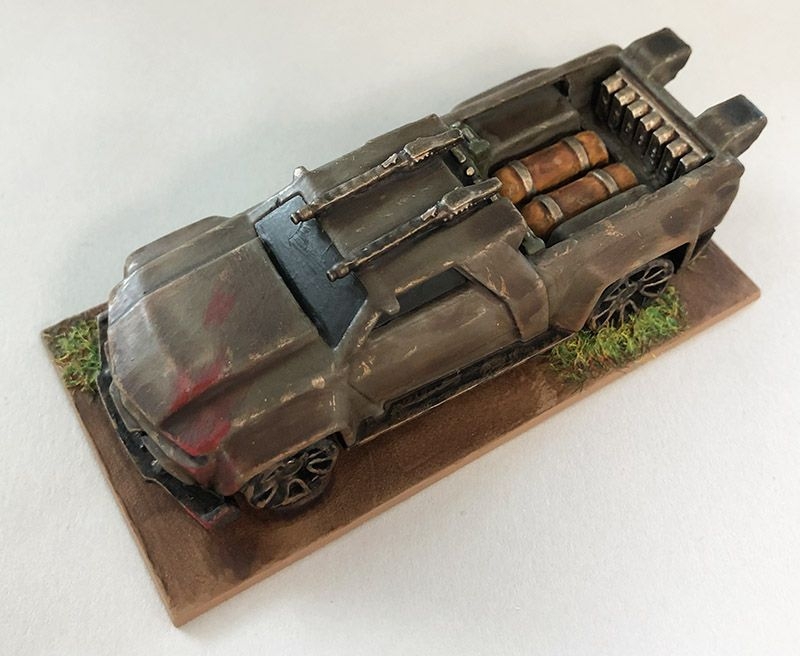 One touch I added, just to bring a splash more colour to the vehicle, was a smear of blood across the bonnet. It doesn't really fit with a game of Gaslands, but it does lift the generally dark vehicle a bit. I haven't done anything with sponsor logos or numbers or anything - it would look better with something along those lines, but I don't have any bright ideas right now. Something to return to, perhaps.

I've not spent any points on additional perks, but coming in at 22 points, it gives me a bit of leeway on that score if I want to improve this vehicle or invest in a more expensive teammate.

Coming up with a name for the vehicle was the hardest part! The theme for this team will be motoring puns based on the names of old-school professional wrestlers. This truck is named for the late Dusty Rhodes, 'The American Dream': 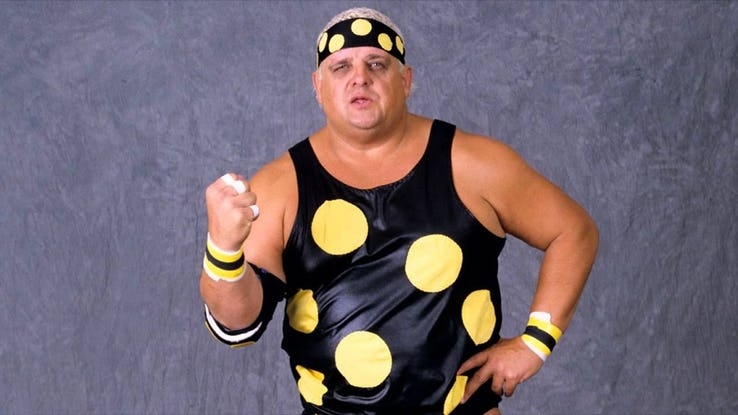 Hmmm... I might need to go back and add some polka-dots. Future vehicles for this team might include: The Macho Van, Harley Racer or 'Chassis' Freddie Blassie. Other suggestions welcomed (but no prizes for Diesel, Blacktop Bully, or Thurman 'Sparky' Plugg...).

Gaslands: Refuelled comes out on 19 September. Preorder your copy today!