In this fascinating blog post from Toomas Boltowsky and Nigel Thomas, the co-authors of Elite title Armies of the Baltic Independence Wars 1918–20, give us an overview of the topic of the book and discusses the thought process behind the images and maps included. 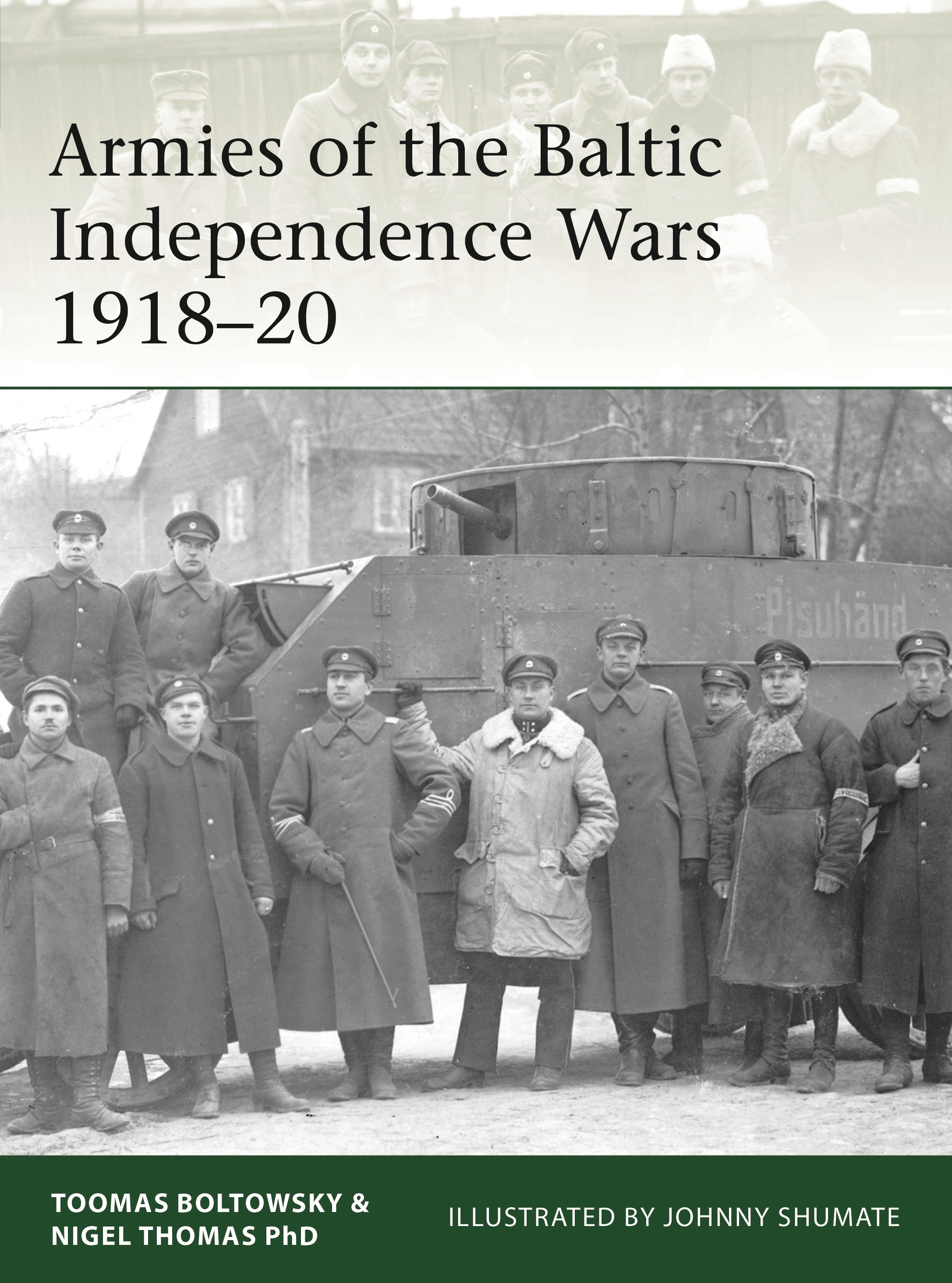 It is a well-repeated myth that ‘the guns fell silent’ on 11 November 1918, thereby ending World War I. Whilst this was certainly correct for the Western Front, the principal theatre in which British troops were engaged, it did not hold true for the Eastern Front, where the Allies (principally the British and French) actually ordered the German Imperial Army to continue to deploy combat units in the Baltic and Ukraine, in order to defend newly formed states in these regions from the Red Army of Bolshevik Russia. Thus, German forces, which had just fought a brutal conflict against the Allies, were now under Allied command, or at least the Allies thought so, whilst the German commanders had other plans.  Indeed, one of Great Britain’s most distinguished soldiers in the Second World War, Field-Marshal Harold Alexander, actually commanded the Baltic German Defence Force (Baltische Landeswehr) in Latvia for a short time.  Far from hostilities ceasing there was fighting for a further three years, until the Treaty of Riga of March 1921, which ended the Russo-Polish War and Russia’s ambitions to reconstitute the Russian Empire as a communist state.

This book examines the struggles for independence by three small states – Estonia, Latvia and Lithuania, and demonstrates that this was indeed a multi-faceted conflict. Although we think of 1919 and 1920 as years of peace after the Great War, in fact almost every country in Central and Eastern Europe was fighting a full-scale war. Not only were the Baltic armies defending their homelands from Bolshevik Russia, but also from anti-communist White Russian Armies armies, who wanted to reform the Russian Empire, and German forces living in the Baltic, fighting as irregular ‘Free Corps’ (Freikorps), who wanted to annex the Baltic states to the Reich one way or another. Furthermore, each Baltic State endured a civil war, as White and Red Estonian, Latvian and Lithuanian forces battled for national sovereignty. Finally, the Baltic states, in particular, Estonia, were supported on land by units from Denmark, Sweden, Finland and Ingria (a region situated between Estonia and St Petersburg) and on the sea by Allied naval forces led by the Baltic Fleet of the British Royal Navy.

The implications of the Baltic Independence wars are huge. The victories by the Latvian, Lithuanian and especially the Estonian forces prevented Germany, Bolshevik Russia and Tsarist Russian forces from dominating the Baltic coast until 1940. In fact, Estonia and Poland were the only states who won their independence by their own efforts, supported by small Allied contingents. They prevented Lenin’s Russia from invading Eastern and Central Germany up as far west as the Franco-German border. It is a great tragedy that the Baltic states did not learn from their experiences, as Finland did, and build enduring and credible military alliances in the inter-war years which might have deterred Soviet Russia from invading in 1940, thereby condemning them to almost 50 years of Soviet communist oppression.

Our text, supported by an excellent map by Toomas, covers a lot of history from different angles and this has necessitated some condensing of text, but I believe we have produced a readable account which clearly describes the to-and-fro of battle, the most important military units and their achievements, and the most important commanders. The battle orders boxes list the most significant units and we have particularly tried to showcase the armoured units such as armoured cars, tanks and armoured trains, which played an important part in warfare on the Eastern Front. There is also a very useful chart listing important Baltic towns which had different names in different languages, allowing the reader to trace the progress of the campaigns on modern maps. Additionally, I was delighted that Osprey Publishing appointed Johnny Shumate to be our artist, especially as he very kindly agreed to include extra figures in the colour plates in order to include figures we really felt could not be omitted.

Our favourite parts of a uniform are the rank insignia, accompanied by the rank-titles in the original language and any variations in total for cavalry, artillery, etc. I would have thought that armies which were formed in wartime would have adopted a simple rank-badge system and stuck to it until the end of the War. However, the Estonian and Lithuanian armies introduced fairly complicated systems which were changed several times during hostilities. Toomas tackled this potentially confusing situation by drawing superb Estonian, Latvian, Lithuanian and Landeswehr rank plates which really enhance and explain the text. We also added approximate British rank equivalents to make sense of the rank insignia, always bearing in mind that these can never be exact equivalents. Toomas supplied most of the photographs. I was particularly impressed by these, as most of them were new to me and I suspect most English-speaking readers.

I can recommend this book to any military enthusiast who, like me, is interested in the armed forces of small nations which are often ignored. However, Estonia, with only about 1.1 million population, managed to raise 85,000 armed forces reinforced by 120,000 Defence League civilians, a colossal achievement which I don’t think has been bettered anywhere. I am particularly proud of the coverage given to the Estonian Red Army, a military force I never actually knew existed before meeting Toomas. Naval forces do not figure much in military histories of this period, but the Estonian Navy was an important force and so it really deserved to be included.

Most books available on the Baltic Independence Wars – sometimes in English inaccurately referred to as ‘Pygmy Wars’ are mostly unit or official histories published before the Second World War in Estonian, Latvia, Lithuanian and German. Thus, this book fills an important space on the bookshelf of any military historian interested in twentieth-century European conflicts.

To read more, order your copy of Armies of the Baltic Independence Wars 1918–20 now.