Publishing on 12 December, Romance of the Perilous Land: A Roleplaying Game of British Folklore is one of the two launch titles for the new Osprey Roleplaying series. Written by Scott Malthouse, the game sees players take on the roles of valiant knights, mighty barbarians, subtle cunning folk, and more as they roam the land fighting evil, righting wrongs, and creating their own legends. Scott Malthouse is back on the blog today looking at character creation in his upcoming RPG!

Welcome to the second designer blog for Romance of the Perilous Land: A Roleplaying Game of British Folklore, where this time I’ll be talking about how you create a character in the game.

Romance of the Perilous Land is designed to have a fast and simple character creation, but with enough depth to make your character mechanically fun to play. A character comprises of the following elements:

In the game players take on the roles of heroes of a mythic land. Some will have great strength, others will have a keen intellect, while some will be charismatic enough to talk their way out of sticky situations. There are five key attributes in the game: Might, Reflex, Mind, Constitution, and Charisma. For anyone familiar with traditional roleplaying games, you will be right at home with this spread of attributes. In Romance of the Perilous Land, the higher your attribute score, the better. Players can generate their scores in several different ways, whether it’s a set array of numbers or rolling dice to randomly determine your score.

Before you generate your attributes, you’ll want to think about what kind of character you want to play - will you be a valiant knight who defends the innocent? A sly thief who strikes from the shadows? An uplifting bard who bolsters their allies with stories and songs? A wild barbarian who’s as tough as nails? An eagle-eyed ranger with great survival skills? Or perhaps a magical cunning folk who weaves spells? These are known as classes, and they define a host of things about your character, including the kinds of weapons and armour they’re trained to use, their save proficiencies, their skills, their hit points and the special class features they get as they level up.

Let’s say we want to make a bard. This class is all about inspiring your party to do great things while reducing the morale of your enemies. As a bard, you will want to have a high charisma score, because that’s the attribute many of your class features rely on, like Battle Song, which gives an ally a better chance to hit an enemy in combat. You might want to keep your bard out of the front line of combat, so putting your next highest score into reflex, used for ranged combat, might be a good idea. 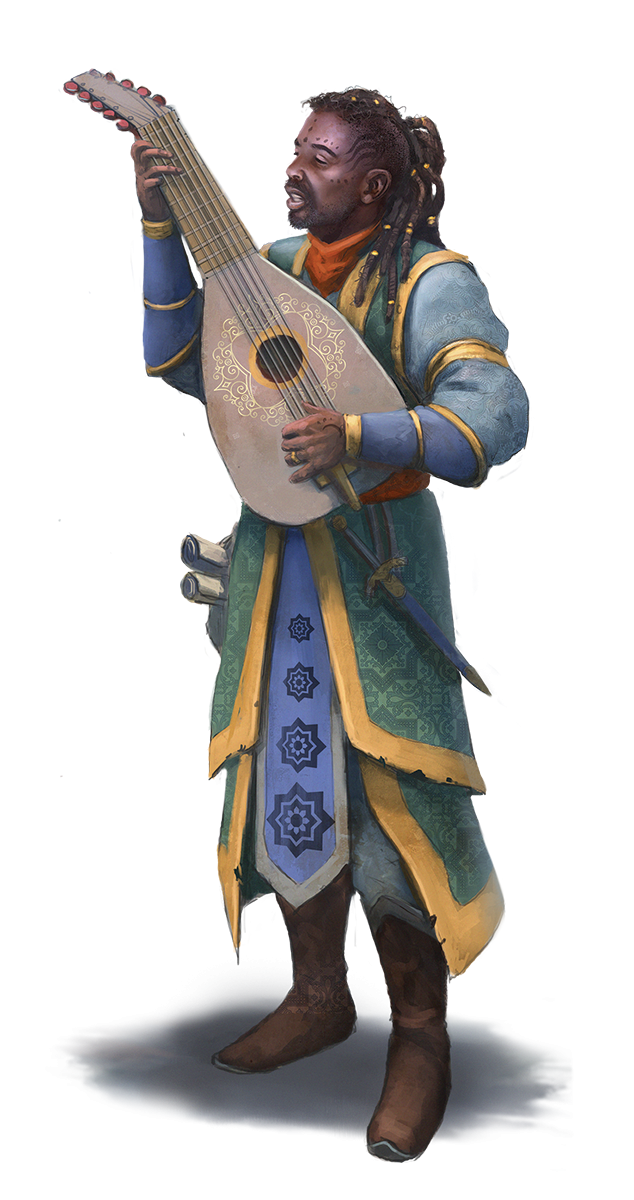 Skills are an integral part of the game, representing certain areas your character specialises in. Going back to our bard, we have the option of taking three from a list of five skills, so we opt for Persuasion, Perform and Bluff. Each skill is linked to an attribute - all three of these skills are tied to charisma, which is our bard’s highest score. Skills give you an edge when using them while trying to perform a relevant task, allowing you to reroll your die and take the highest result. Your class isn’t the only place to get skills - your background also grants two more to help flesh out your character. Backgrounds can enhance the roleplaying experience by giving your character a history, along with skills, equipment and some starting cash. Maybe our bard used to be an outlaw, living on the streets and stealing to stay alive, so taking the Outlaw background makes sense and it gives us two more skills: stealth and thievery - both tied to reflex, which is our second highest score. We also get a makeshift dagger, a black cloak, a set of lockpicks and 3gp. Now we can start seeing our bard coming together.

Every first level character starts with a talent - a special ability they have that sets them apart from the average person on the street. Talents offer a way to further customise your character to fit the playstyle you’re going for. Some have prerequisites that must be met in order to take them, such as Fleetfoot, which requires a character with 12 reflex. There are 42 talents in total, so plenty to choose from, but not so many that it gets confusing. There are a couple of bard-specific talents, so let’s take Instrument of Valour, which allows our bard to choose a bard class feature and gain another use of it each combat. Suddenly this character has become more potent. You gain a new talent at level two and every two levels after, so you’re free to build your character in any way you want. For example, we might want to give our bard some spells next level, so we opt for the Magic Initiate talent, giving us access to some low-level (but incredibly useful) spells.

Most people in the Perilous Land worship a patron god or goddess. These are all based on real Celtic deities and offer more roleplaying opportunities for your character. Each deity has one or more classes with an affinity to them. For bards, the beautiful harpist Fachea, the goddess of creativity, is the perfect fit. We can note that Fachea is popular with people from the south, so we may determine that our bard is from a southern kingdom like Ascalon, perhaps from the capital city of Hykaria (hopefully avoiding Vortimer’s brutal battle pits).

There are various factions in the Perilous Land, some allied with Camelot, some standing with the forces of darkness and others neutral to these two sides. Becoming a member of a faction is completely optional, but they offer even more roleplaying opportunities for your character. Our southern bardic outlaw could be a monster-hunting Iron Hawk, a valiant Knight of the Round Table, or a member of the Order of the Fisher King, but none of these quite seem right for them. However, the Merry Men of Sherwood makes sense - they too are outlaws with a heart of gold! Joining this faction gives a few rules to live by. For the Merry Men, this includes giving 50% of our treasure to the need, and being fiercely loyal to Robin Hood. There’s also a 1 in 6 chance we’ll meet a fellow Merry Man in a forested area, who we can call on for aid, which could come in handy.

Now all that’s left is to give our bard some equipment, a name and a short backstory (which should be easy based on the selections we’ve made during character creation). Our class gives us the chance to start with a sling and leather armour, which seems fitting for a ranged character. There are full equipment lists in the book so you can kit out your character so they’re prepared for adventure. Our name will be Liana Willow, hailing from Hykaria. A daughter of a spice merchant from the far off Bronze Lands, Liana decided to make roots in Ascalon, much to the chagrin of her parents who still reside overseas. She had always loved the stories of foreign kingdoms and set about collecting the tales and verses of Ascalon and the Perilous Land. But despite her best efforts, she fell on hard times, having to steal to stay alive. Having being caught by Vortimer’s Golden Guard, Liana escaped her cell and left the city, worried she’d be sent to the battle pits (or worse). Fleeing to the Forgotten Forest, she had to contend with a family of vicious goblin-like redcaps. Fortune shined upon her that day and she was aided by two members of Robin Hood’s Merry Men, who helped slay the redcaps. Liana decided to join the Merry Men and fight for injustice, all the while seeing it as an excellent opportunity to travel and record the vast lore of the Perilous Land.

And there we have it - a fully fleshed out character we can start our adventures with. What kind of hero will you create in Romance of the Perilous Land?