Today on the blog, David Fletcher author of Churchill Infantry Tank, recounts the main features of the different Marks of Churchill tank. 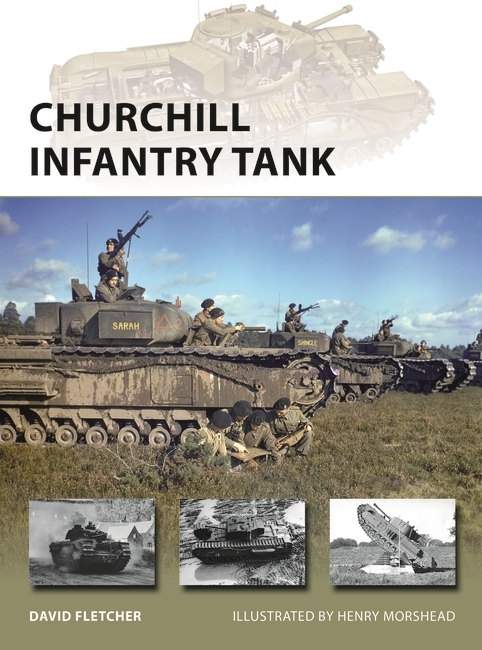 Having written about the Churchill tank a number of times over the years I have come to realise that the whole business is a learning process, they do say that if you wait until you know everything about a subject then you’ll never write anything. To give you an example, I discovered recently that most of the cast turrets for Churchills Mark I and Mark II were made in the United States and despite them being identified in a caption as M3 Grant turrets they are obviously Churchill. In any case it was confirmed later; I now know where they were made and how many were made. Of course this was in the days before Lend-Lease so they had to be paid for but this information is contained in the new book, probably for the first time. 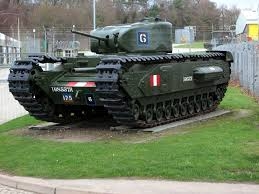 Much the same could be said of the Churchill Mark VI. In reality it is very difficult to tell apart from an up-gunned Churchill Mark IV; there are differences shown on the stowage diagram, but you need to see these in the photograph, if they were applied. The key identification feature is the layout of the top of the turret but one rarely sees that, however it has enabled us to identify a Mark VI among the Tank Museum exhibits, so at least one has survived. They were produced specifically as such, we know that from the contract cards, but quite how one is identified we still don’t know for sure. The four Churchill tanks supplied to Ireland in 1948 are said to be Mark VI, and one or two survive, but they may be up-gunned and up-armoured Mark IV, there is no easy way of telling. 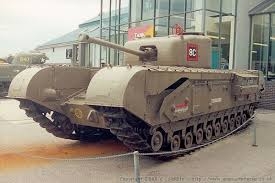 Now accurately identified as a Churchill Mark VI, this tank was still believed to be a Mark IV when it stood outside the Tank Museum.
Courtesy of Tank Museum.

The same goes for the Churchill Mark X, indeed all three late Marks. There were plans afoot to build Mark IX (six-pounder gun) Mark X (75mm gun) and Mark XI (95mm howitzer) on older tanks with a new turret and thicker frontal armour, at the end of the war. Having never seen any photographs of these we assumed this was never done, but an official document said that 33 of the Mark X appeared. Nothing is said of Marks IX and XI so we still assume that they were never built. However what looks like a Mark X appeared in photographs taken at the Indian Cavalry Tank Museum at Ahmednagar. It features the heavier Mark VII turret, presumably on a reinforced hull, and a new front plate featuring 152mm thick armour, a rounded porthole for the driver and a rounded mounting for the Besa machine-gun. From the front it looks like a regular Mark VII but a distant side view shows a square door at the side, revealing that it was once an older tank. How it got to India or whether they had any more we don’t know, but again we can say that at least one survives. 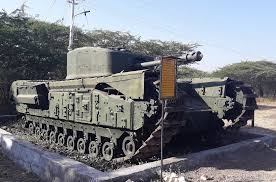 Probably the only surviving example of a Churchill Mark X, preserved at the Indian Cavalry Tank Museum at Ahmednagar.

Naturally, when putting new things in one is supposed to leave something else out. Especially with a relatively slim book such as this is. However, we seem to have covered most of the information about the different Marks of Churchill tank and anyone who wants to know more should study the manuals in a military museum.

The Churchill was a very distinctive tank, hardly likely to be mistaken for anything else. It was woefully under-powered and under-gunned by contemporary standards, especially when compared to its foreign counterparts but it was well armoured and became more reliable latterly, especially when attended by a dedicated crew, but it served right through to the end of World War II and even into the Korean War as well. And then of course there were the Funnies, the AVRES, ARKS, Crocodiles and other special purpose variants although they play no part in this book.

All in all then the Churchill was a remarkable tank, from a most inauspicious start it developed into a key fighting machine and towards the end of World War II even tried to fulfil Field Marshal Montgomery’s ideal of a Universal Tank, albeit rather slowly. Fortunately, a reasonable number have survived, throughout the world, and have given those interested something to focus on, but there is always a wider picture and it is that which this new book attempts to chronicle.