To help you prepare for this upcoming addition to the series, we are exploring the history of the Korean War. We started last week with an extract from Campaign 162: Inch’on 1950 by Gordon L. Rottman, and this week we'll be taking a look at an extract from Campaign 328: Imjin River 1951 by Brian Drohan, accompanied by a fantastic piece of artwork from Steve Noon. 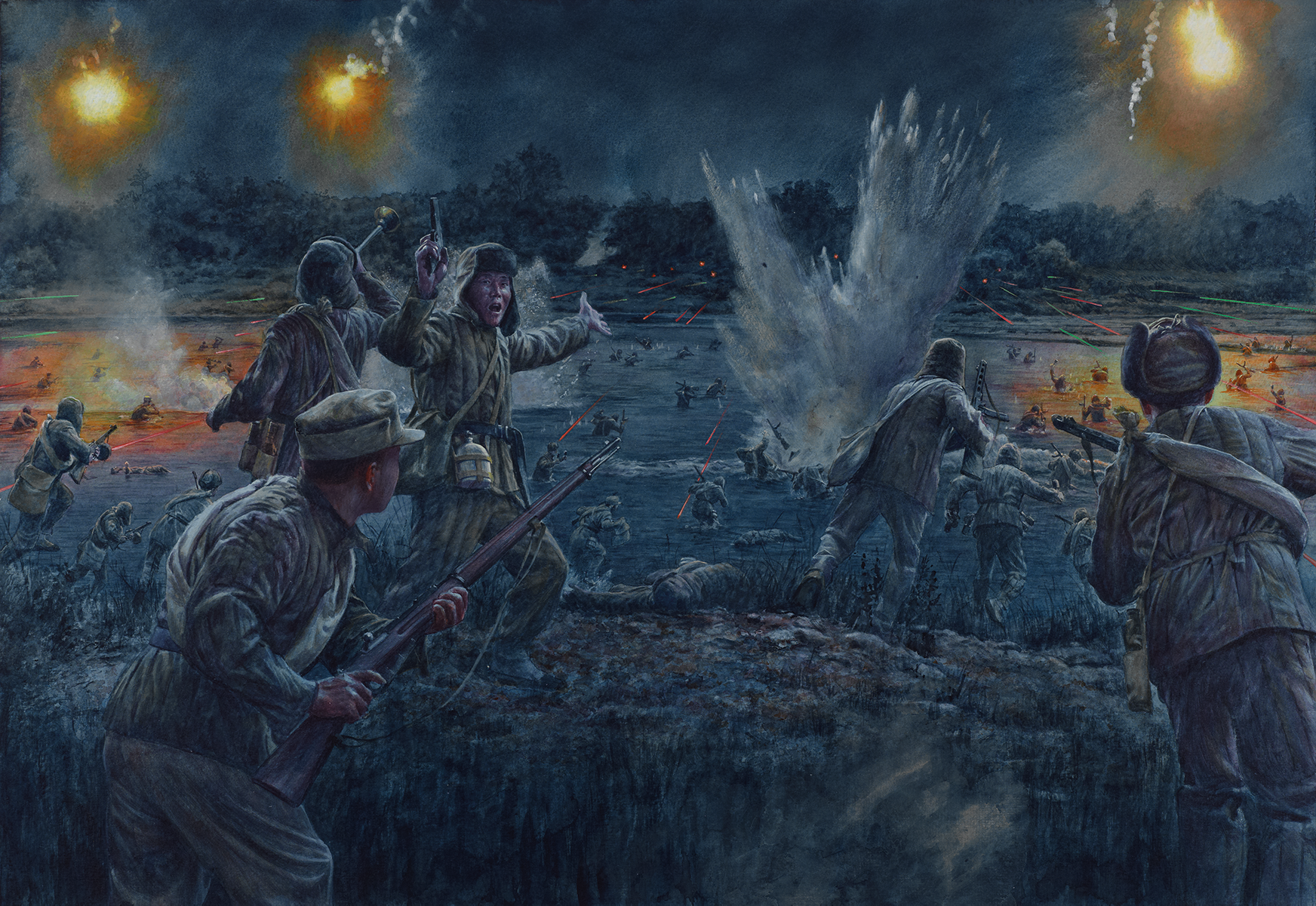 Chinese troops were under pressure to advance quickly in order to secure the southern bank of the Imjin. This move would allow follow-on forces to continue the assault on the Glosters’ A Company, located on Hill 148. Early in the evening, the Glosters’ commanding officer Lt. Col. Carne despatched a ‘fighting patrol’ of 16 men to the riverbank at Gloster Crossing to provide early warning in the event of a Chinese attack. Carne ordered the leader of the fighting patrol, Lt. Guy Temple, that, if possible, he was to capture an enemy prisoner for interrogation. Furthermore, Carne told Temple that if he encountered a small force, he was to ambush it. But if Chinese troops outnumbered his, Temple was supposed to withdraw. Armed with extra Bren gun ammunition and transported by Oxford carriers, Temple’s men occupied a series of slit trenches near a cut in the riverbank, which allowed vehicles to move into and out of the ford site to Temple’s direct front. There the fighting patrol waited for the enemy. Around 11.30pm, Temple’s men heard splashing and rustling sounds from the north bank. Temple fired several flares to illuminate the crossing site and spotted Chinese soldiers fording the river in strength. Temple called in artillery while his patrol poured machine-gun and rifle fire into the oncoming Chinese as Temple requested artillery support from every gun that 45 Field Regiment had. The Chinese soldiers on the opposite side of the river from Temple’s men were the advanced guard of the 187th Division and carried only the bare necessities – clothing, ammunition, food and water. The most heavily armed among the Chinese carried their individual weapon – a rifle or ‘burp’ gun – as well as satchel charges or grenade bandoliers for use against fortified positions or enemy armoured vehicles. Tactical communications were also far more rudimentary than the radios available to the British; Chinese company and platoon commanders relied on bugles and gongs. The Chinese may have been a low-technology army, but they had the advantage of numbers against Temple’s fighting patrol. Despite the accurate, lethal fire that Temple’s men poured into the advancing Chinese, Chinese troops managed to cross in numbers and mass on the south bank of the river. At this point, Temple received permission from Carne to withdraw to the Glosters’ main positions.

To read more about the Imjin River, pick up a copy of Campaign 328: Imjin River 1951 by Brian Drohan.