To help you prepare for this upcoming addition to the series, we're delving into the history of the Korean War, starting with an extract from Campaign 162: Inch’on 1950 by Gordon L. Rottman, accompanied by a fantastic piece of artwork from Peter Dennis. 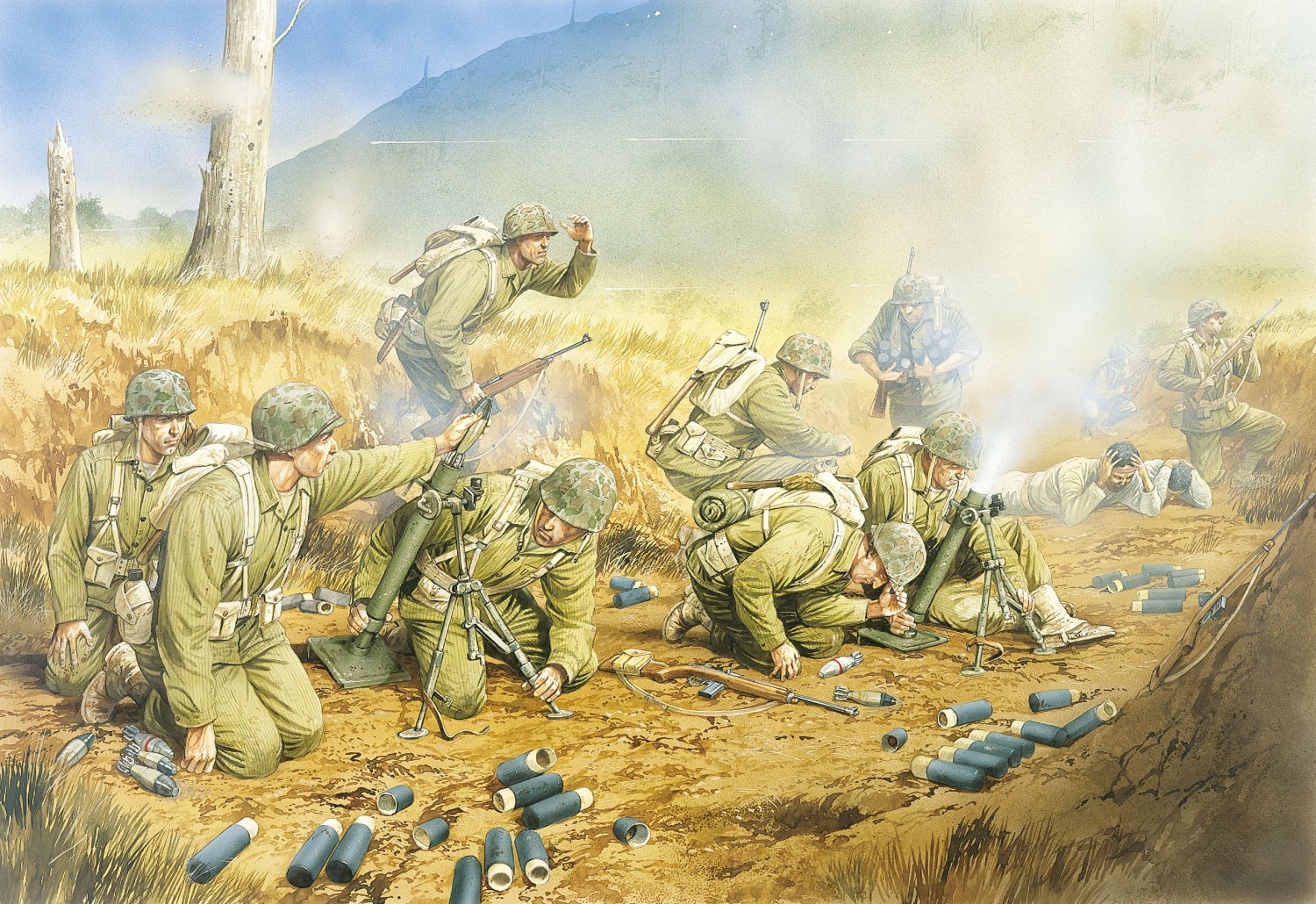 On the morning of September 26, three US marine, the KMC, a US Army, and an ROK regiment closed in on Seoul from the northwest, west, southwest, and south. To spearhead the 7th Marines’ advance, D/7 under Capt Richard R. Breen, was sent southwest on the Seoul–Kaesong Highway to secure the Sodaeman Prison on the northwest edge of the city. As D/7 approached Seoul between the steep slopes of Hill 296 on the right and Hill 338 on the left, they were greeted by cheering Koreans. The column was taken under fire from a water tower 400yd to the front and the civilians scattered. NKs then opened fire from the hillsides only 100yd away. The company deployed on both sides of the road returning fire, but was pinned down. The marines were unable to deploy flank security because of the civilian crowds. The company mortar section under 1stLt Paul P. Sartwell set up two 60mm mortars and immediately knocked out an enemy position. Totally exposed, the lieutenant directed the mortar fire and was hit three times before being put out of action. Two rifle platoons maneuvered to clear the slopes, but resistance was heavy. A tank-infantry relief force sent by the regiment was turned back. The company, faced with encirclement, all officers wounded, and casualties mounting, withdrew 1,000yd back up the road. The mortars delivered covering fire during the withdrawal. Carrying all of their dead and wounded, they established a perimeter on both sides of the road in the late afternoon. Before dark they received an airdrop of ammunition and supplies and prepared for a tough night. The NKs, though, contented themselves with remaining in their hill positions. The rest of the 2/7 was attacking eastward and the 3/7 also attacked east to secure a foothold on the north end of Hill 338. D/7 was relieved in the morning. Army and marine rifle companies were allocated an array of supporting weapons, but their distribution differed. A marine company had a machine-gun platoon of three sections, each with two squads armed with a Browning .30cal M1919A4 light machine gun. A section was generally allotted to each rifle platoon. Within the company headquarters was a mortar section with three 60mm M19 mortars. The marines concentrated 18 3.5-in. M20 bazookas in the battalion assault platoon, with two attached to each rifle platoon. Army rifle company weapons platoons had a mortar section with three 60mm mortars and a special weapons section with three 57mm M18 recoilless rifles (not used by the marines). Army rifle platoons had a weapons squad with a bazooka and an M1919A4 machine gun. The 60mm M19 mortar was the rifle company’s workhorse, its resident “artillery.” While artillery support was usually available, the benefit of the immediate fire that a company’s own mortars could provide was invaluable. The M19 was essentially the same as the M2 used in World War II, but was provided with a selector lever on the tube’s base plug allowing it to be drop-fired or trigger-fired. Some units deployed to Korea with the M2 and they were also issued to ROK units. Their ammunition was interchangeable with that of the Chinese 60mm Type 31. Ammunition included high explosive and white phosphorous smoke as well as illumination (parachute-suspended flares, not pictured). The maximum range was 1,985yd and its minimum was 50 yards.

To read more about the Inch'on campaign, pick up a copy of Campaign 162: Inch'on 1950 by Gordon L. Rottman.