Frostgrave: The Wizards' Conclave is the latest supplement to the best-selling fantasy wargame by Joseph A. McCullough, bringing a host of talented wargames designers to the frozen ruins of Felstad. On the blog today we have one such designer - Ash Barker - talking about the mini-campaign he wrote for the book.

Two things happened in 2015 that led to me contributing to this book. The first was, I began a YouTube channel in June of that year. Then in July Joe published Frostgrave. While both of those things might have seemed innocuous at the time I doubt either of us foresaw what a huge and consuming part of our lives they’d become.

I played my first game of Frostgrave that autumn, with snow starting to (appropriately) arrive in my part of Canada. I’d been receiving messages from various viewers that if I liked skirmish games there was a new one from Osprey that I should give a look. As is my way I grabbed a couple of copies of the rulebook, badgered some friends into preparing models and set about combing through it to find out what I needed to assemble in the way of terrain and other accessories in order to play.


Check out the full Frostgrave playlist from Guerrilla Miniature Games

That first video we recorded has been watched almost 50,000 times since then. In the years since we produced another thirty games and all-told people have watched us play Frostgrave over 250,000 times.

Suffice it to say we enjoyed the game a great deal. Noble and evil deeds were done. Great monsters were defeated and numerous wizards rose and fell in the course of those storied campaigns. A great Liche was cast down and his usurper failed to ascend to Lichedom herself, instead plummeting from the ancient evil’s Sky Castle spitting curses as the rest of us made our escape. Dark and deadly dungeons were explored and pacts made with terrible powers from beyond the veil.

For me Frostgrave married all that was best and most fun about role playing games with my real passion, creating a visual narrative on the tabletop with great models, terrain and friends. It has been a top-shelf game for the entirety of my four years creating Video content and I see no sign of us ever leaving the Frozen City for good.

I was deeply flattered to have Joe ask me to contribute to the Wizards' Conclave and not a bit intimidated by the idea of having something in print. Ironically I think I submitted my final draft of The Blade of Barael before my final work was done on my own first Wargaming publication (Last Days: Zombie Apocalypse) so while it came out afterwards I think it might have been completed first!

Joe’s deep and detailed instructions basically amounted to ‘Have fun and write something you’d enjoy!’. I struggled with this a bit as for me, the best parts of Frostgrave are always the connective tissue; what happens when a story progresses rather than just the action of a single encounter. So as I hadn’t been specifically been told NOT to write a short campaign... I decided to stop trying to fit all my ideas into one encounter and just write a short campaign. I suspect Joe will have me sign some kind of binding form in triplicate next time we collaborate.

I get ideas for encounters from all over. Sometimes I’ll watch a movie (even in an unrelated genre) and it will spark something. Sometimes reading a book, or just driving down the road listening to music. There’s always some moment however when you hear some combination of words or see something and it just gets you into a creative headspace.

I have always been drawn to darker, low Fantasy settings. The art of Frank Frazetta drew me to many an issue of Heavy Metal magazine as a kid and I was more into Robert E Howard’s Conan than I was to lighter Fantasy books as a kid. The idea that one of the most powerful figures in Felstad might not have been entirely good and may have even been a bit of a warmonger appealed to me. I also liked the idea of the common-folk of today having Myths they might not even know are related to the Frozen City. It could be that through the great Thaw there is some truth to be revealed in something as simple as a crumbling ancient Aviary. 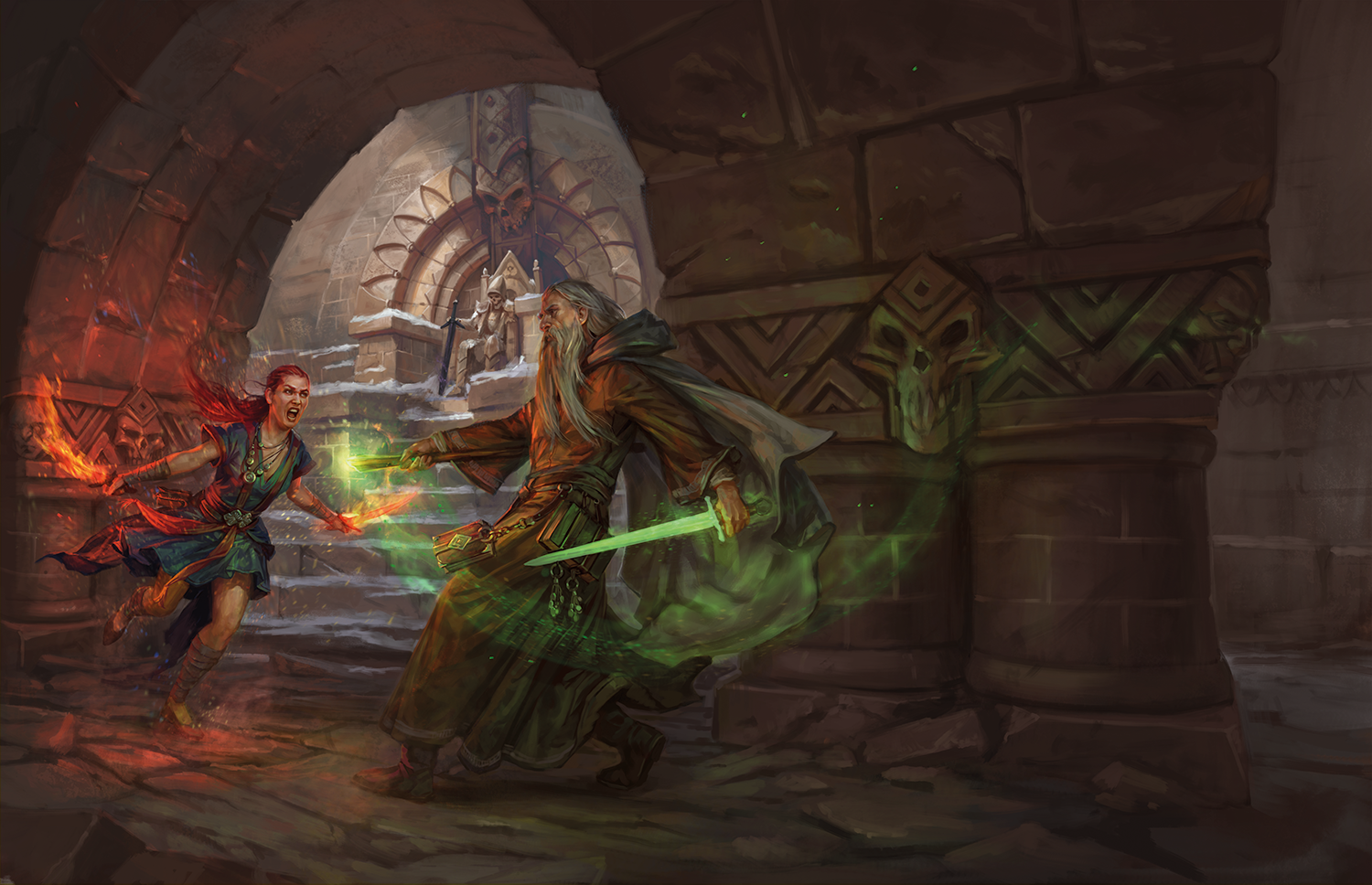 Artwork for The Blade of Barael by Kate and Dmitry Burmak

While the mini-series is only three games long, I was entertained with my own imaginings all through writing it of what ancient deeds those companions might performed and how traces of them could be left behind. The Shards of Darkness littering the aviary are just the detritus of the Crow-Mage’s forging process. They are literal garbage of another time. But they also represented clues to happenings from millennia earlier that the Wizards would be desperate to follow.

Having a villain was also important to me, but I wanted that villain to be conflicted. Not all monsters are evil and while the Half-Breed might be utterly insane he is not particularly malicious. He is simply seeking release from his eternal agony by quenching the unholy light inside of him with the Shards of Darkness.

I hope people enjoy their little trip to my corner of Felstad. It’s a dark and gloomy corner and I wouldn’t particularly recommend spending the night there... but the rewards might just be worth it.

While I’m pretty satisfied with the overall result of my contribution to the book, I’m absolutely blown away by the art. Dmitry and Kate Burmak have created some absolutely fantastic interior pieces to compliment the cover and I can’t wait for people to get their hands on them.

Big thanks to Joe for the invitation to jump into his world and muck around a bit. I would say I hope I didn’t leave too many boot marks in the snow, but let’s be honest... I actually rolled around making snow-angels.

Frostgrave: The Wizards' Conclave is the latest supplement to the best-selling fantasy wargame, bringing a host of new scenarios to the Frozen City. Order your copy today!