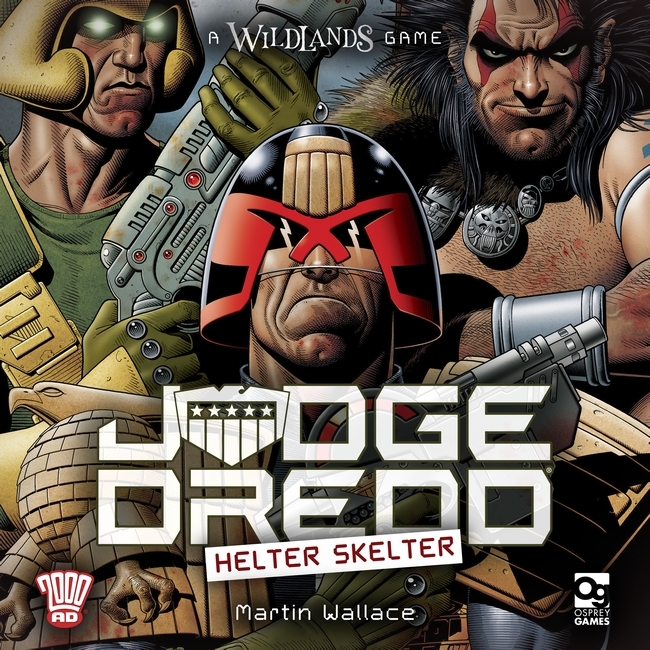 The worlds of Judge Dredd, Sláine, Strontium Dog, and Nikolai Dante will be crashing onto tabletops around the globe in October 2019 with the release of Judge Dredd: Helter Skelter, a new miniatures board game building on the critically acclaimed Wildlands series from designer Martin Wallace.

The game brings some of 2000 AD’s most well-known characters to the streets of Mega-City One, fighting for the shattered fragments of their own universe! Faction-specific action decks and new special character abilities give each group their own playstyle, from the well-armed Judges with their explosive ammo to the bestial fury of Sláine and his Celtic allies. Playing to your faction’s strengths and exploiting your opponents’ weaknesses will be the key to claiming victory on the streets of Mega-City One.

Artwork from 2000 AD artists Rufus Dayglo, Clint Langley, Simon Fraser, and Chris Weston brings the authentic comic-book feel to the card art, while the twenty unique miniatures sculpted by Bobby Jackson, David Lee-Whitaker, and Jason Wiebe transport these characters from the page to the tabletop.

Speaking about the project, designer Martin Wallace said ‘When they burst onto the scene in the 1970s, 2000 AD and Judge Dredd were absolutely revolutionary. I was hooked immediately by the amazing story lines and characters. It is a privilege that after many years one of my designs is to be used to retell those stories in a different manner, through the lens of a board game.’

Matt Smith, editor at 2000 AD, commented ‘The worlds of the Galaxy’s Greatest Comic are some of the most exciting, dangerous and thrilling in the known universe – so when the likes of Judge Dredd, Strontium Dog, Nikolai Dante and Sláine collide, as they do in the high-octane Helter Skelter, you’re guaranteed a fun time! 2000 AD is very excited to have teamed up with Osprey Games on this explosive new miniatures board game, and there’s no doubt that fans will have a blast!’

Games Developer Filip Falk Hartelius added ‘It has been a joy to work on Helter Skelter, bringing together the work of so many different illustrators and sculptors into one incredible whole. It is truly a labour of many people’s love – I’m really proud of this one.’

Something in the multiverse has shattered, and now the universe is bleeding. Throughout Mega-City One there are reports of invaders wreaking havoc. Celtic barbarians in Ezquerra Block. Russian nobles in Apetown. And rumours of fragments of other universes scattered across the city, waiting to be claimed.

Head to the streets of Mega-City One with Judge Dredd: Helter Skelter, a new miniatures board game combining Martin Wallace’s critically-acclaimed Wildlands rules with the worlds of 2000 AD. Four unique factions bring iconic characters from Sláine, Nikolai Dante, and Strontium Dog crashing into Mega-City One, all intent on finding the shattered fragments of their own universe and crushing anyone who gets in their way.

Things are going to get rough, but one thing is certain. No matter what universe you are from, you still have to answer to the Law!

Martin Wallace was born in Hampshire in 1962, and started designing board games in 1990. He self-published his first game, Lords of Creation, in 1993 and has had over seventy games published since. Martin is best known for Steam, Brass, Discworld Ankh Morpork, and A Few Acres of Snow. Having spent most of his life in Manchester, he now resides in Queensland, Australia.

Illustrations for the four factions are by well-known 2000 AD artists Rufus Dayglo, Clint Langley, Simon Fraser, and Chris Weston, with Brian Bolland providing the illustration for the cover.

Graphic design for the game is by Ian O’Toole, with board art from Wietse Treurniet.

The miniatures are sculpted by Bobby Jackson, David Lee-Whitaker, and Jason Wiebe.

Osprey Games is the dedicated games division of Osprey Publishing (part of Bloomsbury Publishing plc) and publishes a wide range of wargames, card games, and board games. Launched in 2014, the company has produced an array of critically acclaimed titles, including Frostgrave: Fantasy Wargames in the Frozen City, Bolt Action, Odin’s Ravens, Wildlands and The Lost Expedition.

2000 AD is the legendary weekly British anthology comic and home of Judge Dredd, as well as a galaxy of original sci-fi, fantasy, and horror action stars. As well as producing innovative and provocative comics for 40 years, it has brought the industry some of its biggest talents, from Alan Moore, Grant Morrison, and Mark Millar, to Jock, Brian Bolland, Dave Gibbons, and many more. Published in print and digital every Wednesday, 2000 AD is the galaxy’s Greatest Comic and remains at the industry’s cutting edge. www.2000ADonline.com