This blog post examines the events on Utah Beach.

"The landing at Utah Beach by Combat Team 8 of the 4th Infantry Division was the least costly of all the Allied beach landings. The predawn airborne landings drew away any reserves that might have been available to counterattack the beachhead. In contrast to Omaha Beach, the prelanding bombardment was very effective. The amphibious DD tanks managed to reach the shore without excessive casualties. Curiously enough, there was a navigation error by the leading landing waves. Instead of landing near Les Dunes-de-Varreville, which had relatively dense beach defenses, the landings occurred near La Grande Dune, weakly defended by the shattered WN5 defense nest. This defense nest was held by an infantry platoon of Grenadier-Regiment.919 and many of the bunkers had been smashed by naval gunfire or aerial bombardment. Those bunkers that remained active were engaged by the supporting M4 medium tanks. Unlike at Omaha Beach, the German defenders were few in number, and the flat terrain offered them no special defensive advantage. 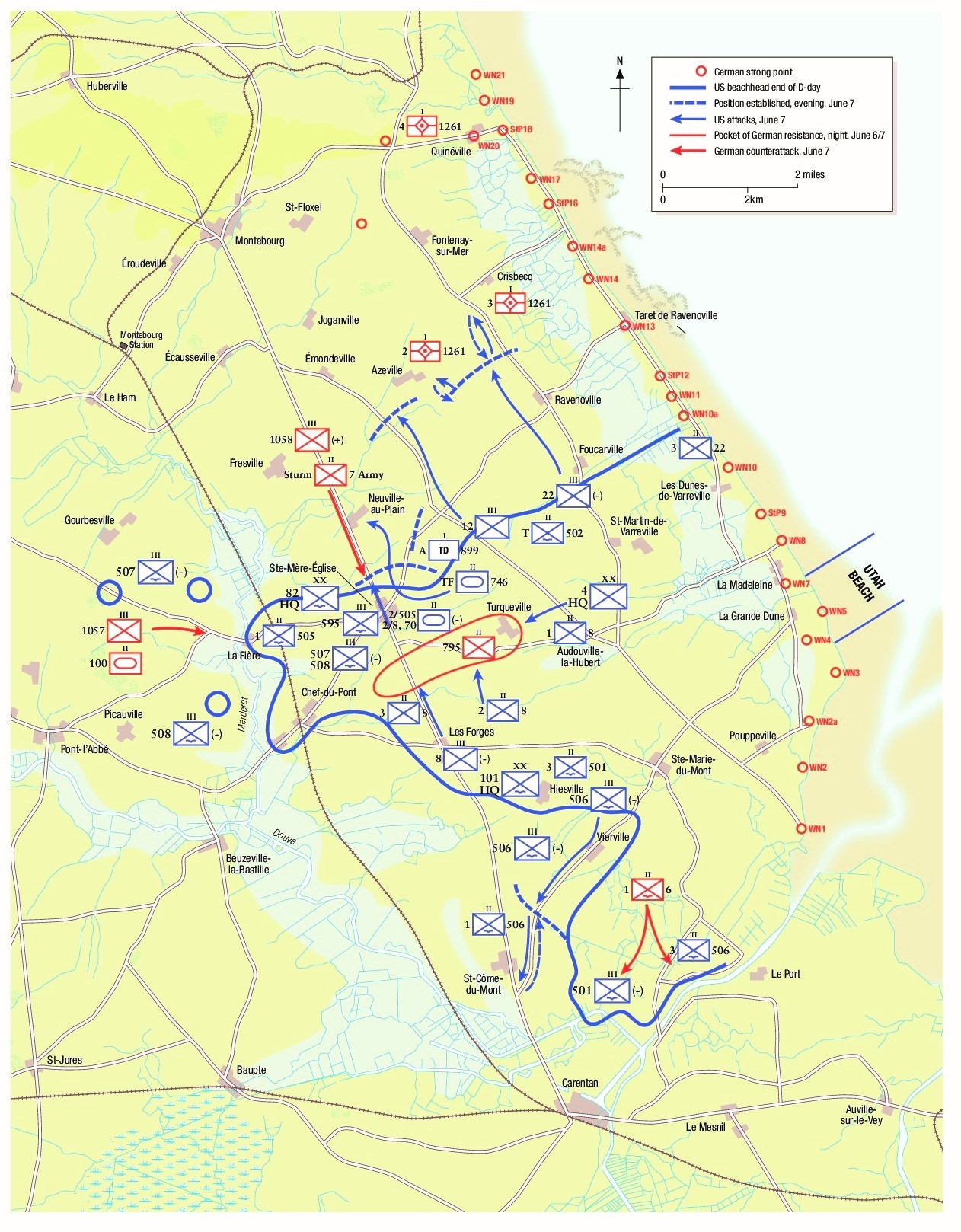 The main tactical problem facing the assault force was the need to secure several causeways leading away from the beachhead. The area behind the beach was flat, with numerous coastal marshes. As part of their defensive efforts, the German engineers had deliberately flooded the lowlands to discourage paratroop and glider landings, and to make rapid exit from the beach more difficult. The causeways were the only dry access routes off the beach. Several of the key causeways were secured by the paratroopers in the early morning hours, and others were seized by Combat Team 8 in the hours after the landings.

With the causeways secured, Combat Team 8 poured off the beachhead, followed by other elements of the 4th Infantry Division. The two airborne divisions were badly scattered, and much of June 6 was spent trying to organize the paratroopers into functional companies and battalions. Much of the fighting centered around the town of St- Mere-Église and the northern sector facing toward Cherbourg. The town of St-Mere-Église had been the scene of fighting since the previous night’s parachute landings. It was defended by elements of Grenadier- Regiment.919 and Ost-Bataillon.795, a formation of former Soviet prisoners of war from the republic of Georgia who had volunteered for service with the Wehrmacht as an alternative to the lethal German prisoner-of-war camps. Although the Georgians put up a stiff fight early in the morning, their enthusiasm quickly waned and there were wholesale surrenders. The town was secured using tank support shortly before counterattacks by the neighboring 91.Luftlande-Division began in the early afternoon. The German counterattacks included a push by Grenadier-Regiment.1057 attacking from west of Cauquigny with the support of war-booty French light tanks of Panzer-Abteilung.100; and another thrust by Grenadier-Regiment.1058 from the north along the Montebourg road, supported by Sturm-Abteilung-AOK.7 with some StuG III assault guns. This fighting continued well into June 7, 1944.

Aside from beating back the initial German counterattacks around St-Mere-Église, the 4th Infantry Division directed two of its infantry regiments, the 12th and 22nd, to push northward out of the beachhead area. There were still a substantial number of German troops manning the fortified strongpoints along the beaches, and it was presumed that they would withdraw once they realized that they were being cut off by the American advance behind them. Besides the coastal defenses, there were several significant coastal gun batteries in this sector at Azeville, Crisbecq, and Quinéville that continued to fire on the Utah Beach landing area. These batteries engaged in duels with Allied warships for much of June 6 and 7 and were so well fortified that only a few of the guns were knocked out during these engagements. Aside from the inherent threat posed by the batteries, they served as a magnet to attract retreating German troops from the beach defenses, thereby creating formidable strongpoints blocking the US advance toward Cherbourg.

The long delays in consolidating the 82nd and 101st Airborne divisions, the slow pace of the assault northward up the Montebourg road, and the growing problems of infantry combat in the coastal hedgerows forced a reconsideration of Allied plans on June 7. When Eisenhower visited Bradley that day, he expressed his concerns that the Germans might focus their attention on the gap between Utah Beach and Omaha Beach. Therefore, instead of focusing on a push northward to reach Cherbourg, the First US Army reoriented its short-term goals to securing a juncture between Utah Beach and Omaha Beach."