Today on the blog, authors Kelly DeVries and Niccolò Capponi, of Castagnaro 1387, give a fascinating overview of how their study on the battle of Castagnaro challenges the original narrative. 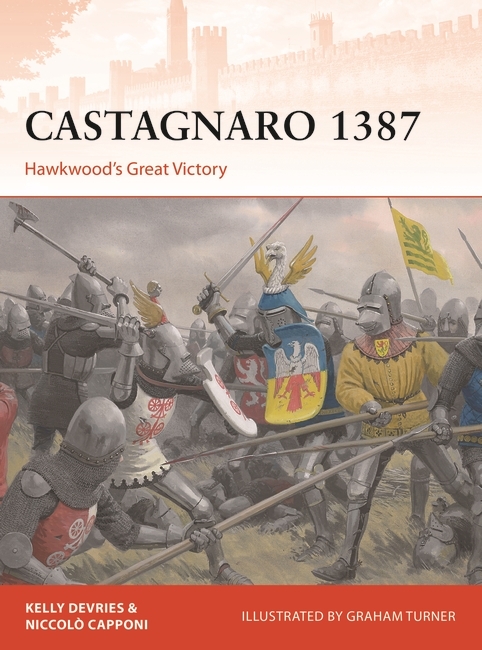 Battlefields can be elusive things; even to the expert eye. Castagnaro is a case in point.

When we started investigating the Paduan-Veronese clash of 11 March 1387, it did not take long before we encountered a series of historiographical hurdles. The placement and description of the battle had been firmly part of the vulgata (i.e. the uncritical accepted narrative) at least since the end of the 19th century and, as a result, constantly repeated and reprinted. It is not difficult to understand why. The battle of Castagnaro was one of the salient moments of Sir John Hawkwood’s career as a military leader, and his first modern biographer, John Temple-Leader, lived in an age where heroes were cherished and worshipped, when not created out of the blue. The Black Prince figured prominently in this romantic pantheon, both as a character and as a military leader. Therefore, it was only logical that Hawkwood must have served under the Black Prince at the battle of Poitiers (he may have, but no firm evidence exists to prove or disprove it) and, as a consequence, Hawkwood’s victorious tactics at the battle of Castagnaro must have mirrored those of his illustrious mentor. A perfect circular argument, and easy to buy into.

Although romantic idealization is partially to blame for this approach, it was also fed by a series of misunderstandings originating from significant topographical changes in the Castagnaro area. In the 17th century, the Venetians had straightened the course of the River Adige, eliminating the twists and turns present at the time of the battle; moreover, in 1838, the Austrian government (the Veneto region then part of the Austrian Empire) had dammed up and drained the old Castagnaro canal. Thus, 19th century historians were looking at a ground radically altered since the time of the battle and the few maps immediately available were hardly a help in redressing this misconception.

As a result, the vulgata of the battle of Castagnaro took on its enduring shape. In the face of the Veronese onslaught, the retreating and outnumbered Paduans under Hawkwood dismounted and deployed in front of a ditch north-west of the present town of Castagnaro and just south of the town of Carpi, their flanks and rear protected on the left by a marsh and on the right by the Adige river. Hawkwood, having planned everything in advance and taking a leaf from the Black Prince’s book, kept a strong mounted force in the rear and had part of the ditch near the Adige filled for the purpose of a counter-attack. Needless to say, once the Veronese were locked with the Paduans in a hand-to-hand struggle at the ditch, Hawkwood executed a flanking movement hitting the enemy’s right and rear, in the process routing the attacking Veronese, the fleeing soldiers getting in the way of the Veronese reserve as it tried to intercept Hawkwood’s men. Thousands of Veronese were captured, their militia in the rear being destroyed as it tried to resist the victorious Paduans. The vulgata also had some catchy details, such as Sir John theatrically throwing his battle of command in the midst of the enemy moments before launching his victorious charge – something bound to appeal to the heroic inclinations of Victorian readers – and the presence of both the Paduan and Veronese carrocci (headquarter war-wagons), just to show how backward the Italians were in matters of warfare and why they needed an Englishman to upgrade their fighting techniques.

Yet, immediately as we started taking a serious look at aerial maps of the Castagnaro area, we perceived something wasn’t quite right. For one, we noticed a number of levees with little or no connection to water bodies, the consultation of late 16th and early 17th century maps revealing not only the twisting course of the Adige, but also the presence of the now lost Castagnaro canal. Besides, we knew about the presence of a Veronese bastida (field fortification) on the opposite side of the Adige from the Fossa Imperiale, a deep ditch that acted as a boundary between the territories of Padua and Verona, and still today between the provinces of the two cities. If we accepted the vulgata, then one had to conclude that the Paduans, and Hawkwood, decided to fight with an enemy force to their rear. Clearly, a fresh and unburdened approach was needed.

Our main source for the battle was the Gatari chronicle, first drafted by Galeazzo Gatari in the 1390s and rewritten by his son Andrea in the first quarter of the 15th century, by then Padua having fallen under Venice’s domination. Both versions had been originally published side by side by the antiquarian Ludovico Antonio Muratori in volume XVI of the Rerum Italicarum Scriptores (1730); however, we were puzzled that for the battle of Castagnaro Temple-Leader and his epigones seemed only to use Andrea’s later, and rather more turgid, account – despite the fact that Galeazzo, because of his position in the Paduan administration, had access to first-hand evidence. Surprisingly, we discovered that the answer lay in an editorial mishap: for some reason, Galeazzo’s text got mangled in the 1730 edition, the section on Castagnaro almost entirely missing. A new, annotated edition of Galeazzo’s chronicle was published in installments between 1909 and 1931, but at that point the vulgata had already kicked in. Besides, most historians not fully versed in 14th century Italian found Galeazzo’s Paduan vernacular difficult to understand – we, in turn, were saved from many an interpretative pitfall only thanks to Dr. Maria Pertile’s linguistic expertise.

Once we had gone through Galeazzo’s text and compared with Andrea’s, the vulgata simply collapsed: not only had Temple-Leader used only the younger Gatari’s account, in many instances he had completely misunderstood it: there was no Paduan carroccio – let alone a Veronese one – the word used in the chronicle to indicate the banner of the da Carrara, lords of Padua, which sported a collapsed wagon; Hawkwood’s flanking charge was performed on foot, maybe with the addition of a few mounted men-at-arms, and certainly not planned in advance; Sir John did not cast his baton in the midst of the enemy to encourage his men, but instead threw it away in frustration because Francesco Novello da Carrara, son of the Paduan ruler, was ignoring his advice. Besides, from both versions on the Gatari chronicle, it was clear that the clash happened near the present-day town of Villa d’Adige, some two miles east of the traditional battlefield. It came as no surprise to discover that other sources had also been mistranslated or misunderstood by the vulgata’s creators, and we were in no small way relieved that Aldo Settia, a renowned Italian military historian, had independently arrived to our same conclusions.

With our fresh translations of the sources in hand, we visited the battlefield and everything fell into place practically without a glitch. Most of the important geographical features were still there, including the ditch that witnessed the main clash and the raised meadow were the Veronese militia had stood. The battlefield’s width also confirmed Galeazzo Gatari’s estimate of the troops involved to be more believable than the inflated numbers given by Andrea (another source contemporary to the battle corroborated our findings). Moreover, the visit showed the sheer impossibility of Hawkwood’s massive mounted charge as described in the vulgata. As with the battles of Crecy and Campaldino, a careful and detached reading of original sources had proven them right, turning the accepted narrative on its head.

Pre-order your copy of Castagnaro 1387 to find out more.