This blog post examines the naval bombardment used by the Allies.

"The preliminary naval operation on D-Day was a bombardment of the coast. This bombardment had two principal objectives: to demolish German coastal artillery batteries in order to prevent them from interfering with the amphibious landing operation, and to soften up the German beach defenses by bombarding the most substantial German beach strongpoints. COSSAC had created the special Martian Committee in 1942 to monitor the German construction of coastal artillery sites, and the naval plan assigned specific ships to engage and destroy every identified battery. It is worth noting that the Wehrmacht began fortifying some of the divisional artillery battalions in Lower Normandy in the spring of 1944, and these were gradually added to the bombardment list as they were identified by the Martian Committee. The Neptune plan generally assigned one battleship or cruiser to each identified battery from the prelanding bombardment. Two of the gun batteries were considered to pose a significant enough threat that they were targeted by special forces operations on the morning of D-Day: the Pointe du Hoc Battery in the American sector between Utah and Omaha beaches, and the Merville Battery on the extreme eastern side of the Neptune landing site near Sword Beach.

The Longues-sur-Mer naval gun battery between Omaha and Gold beaches provides a good example of the naval bombardment force in action on D-Day. The battery was subjected to several bombing attacks in 1944, including two major raids in the week before D-Day, but none of the gun bunkers was disabled. On D-Day, it was assigned to HMS Ajax, which began firing at it around 0530hrs without causing major damage. After the preliminary naval bombardment, the battery began firing on the command ship HMS Bulolo around 0600hrs, forcing it to move station. HMS Ajax returned along with HMS Argonaut and began bombarding the battery again, ceasing fire around 0845hrs after two of its guns were knocked out by direct hits through the open embrasures. The cruisers had fired a total of 179 rounds against the battery. The Longues-sur-Mer battery crew cleaned up the position in the late morning, and the remaining two guns opened fire again in the afternoon toward Omaha Beach, prompting the attention of the French cruiser Georges Leygues, which was defending the American sector. This final bombardment put the battery out of action for the last time on D-Day after it had fired 115 rounds during the course of the day. The battery was captured by British Army units on June 7, 1944. 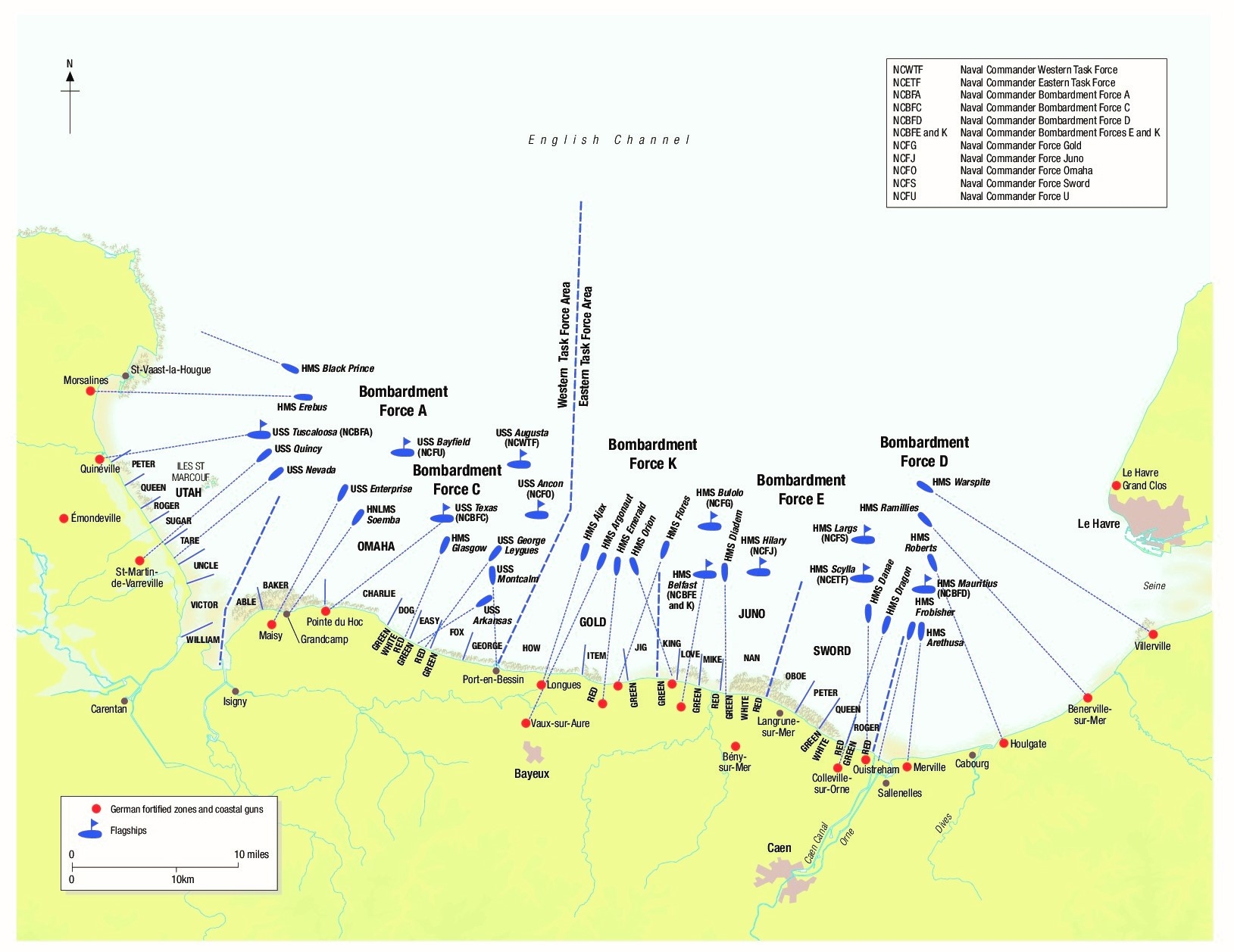 The effectiveness of the naval bombardment plan has been controversial. Prior Allied amphibious operations in the Mediterranean that formed the basis for Neptune planning had not involved extensive beach fortification or substantial coastal artillery. Although the Neptune bombardment proved effective at most of the beaches, the bombardment of Omaha Beach was inadequate. Eisenhower had brought several Pacific veterans to the UK to offer their experiences, notably Major-General Charles “Cowboy Pete” Corlett, who had commanded the US forces in the Aleutians and again in the invasion of Kwajalein in February 1944. Corlett argued that the Pacific experiences were more relevant than the Mediterranean theater experiences owing to the closer similarities of Japanese beach defenses to German ones in Normandy. He argued for a more prolonged bombardment of the beaches, but his advice was largely ignored, leading to bitter recriminations after the landings.

Besides the naval bombardment plan shown here, the German defenses were also subjected to heavy air attack in the early morning hours of D-Day. As in the case of the naval bombardment, the results were mixed. Some sites were particularly hard hit. For example the Pointe du Hoc Battery was largely obliterated by a predawn raid by eight RAF Lancaster squadrons dropping 635 tons of bombs, or about 20 tons per acre. The air bombardment plan was far less effective elsewhere, for example at Omaha Beach, where the bombers dropped their payloads too far inland from the beaches to damage the German defenses."