This blog post examines the events on Juno Beach.

"Of the three British–Canadian beaches on D-Day, the Canadian landing on Juno Beach proved to be the most hotly contested. The main assault force was the Canadian 3rd Infantry Division, landing with two brigades forward. The Canadian landings were later than those on the neighboring beaches, around 0745–0755hrs, owing to the need to allow the tide to cover offshore reefs. 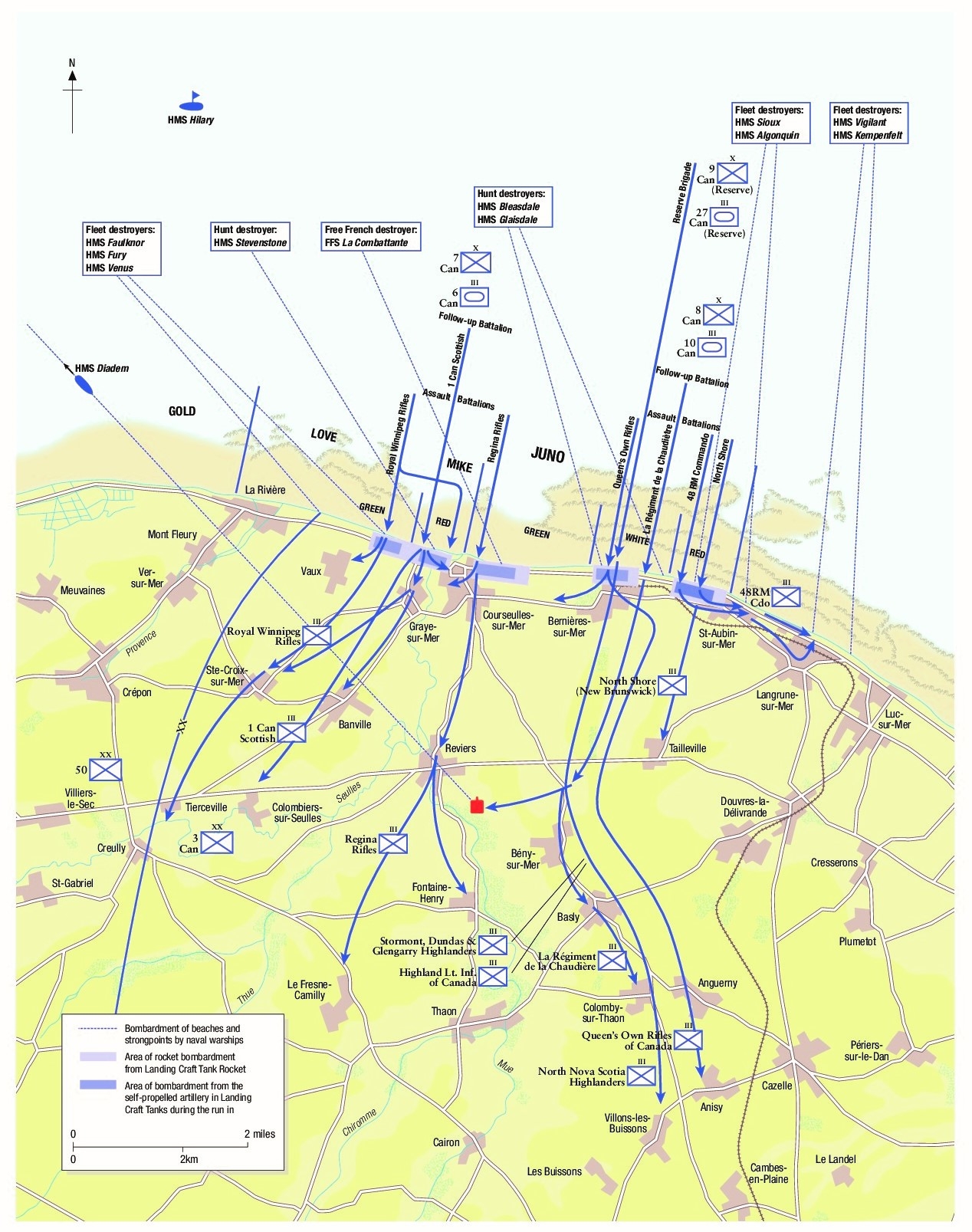 Brigadier H. W. Foster’s 7th Brigade landed on the right (western) flank on Mike Red and Nan Green against the village of Courseullessur- Mer. The assault waves came ashore amongst the numerous beach obstructions. The beach itself was confined by the seawalls in front of the shoreside villages. These seawalls had been converted into fortified positions with numerous gun and machine-gun positions. As was so often the case on D-Day, the plans to land the DD tanks before the arrival of the infantry landing craft went awry, and on Nike Beach the Royal Winnipeg Rifles had to conduct a difficult assault to root out the numerous German defensive strongpoints, incurring significant casualties in the process. The DD tanks arrived late, but provided valuable fire support after reaching the shore. Nevertheless, the fortifications were overcome and the Canadian infantry began to move over the dunes inland. The Regina Rifles landed directly in front of Courseulles-sur-Mer, facing the densest of the German defenses. Fortunately, the DD tanks from the 1st Hussars, 6th Canadian Armoured Regiment landed moments before the infantry landing craft, providing some immediate fire support. The Canadian infantry was exposed on the sandy shoreline with the only shelter being the seawall bristling with German guns. The German fortified positions were gradually eliminated by tank fire and destroyer fire. The village of Courseulles-sur-Mer was heavily defended, and fighting was house to house until midday, by which time the town had been cleared and the two battalions of the 7th Brigade linked up. The follow-on Canadian Scottish Regiment arrived to help provide momentum for the push inland.

The Canadian 8th Brigade landed on left (eastern) flank against the villages of Bernieres-sur-Mer and St-Aubin-sur-Mer. This followed the same pattern as the neighboring brigade with two infantry battalions in the lead assault waves, supported by tanks, with a third follow-up battalion landing by mid-morning. Armored support came from the DD tanks of the Fort Garry Horse, 10th Armoured Regiment and specialized armor of the British 79th Armoured Division. The Queen’s Own Rifles landed on Nan White in front of Bernieres-sur-Mer. The DD tanks were again late, and the opening moments of the fighting consisted of a mad dash across the exposed beach followed by close-range fighting to overcome the numerous German gun pits and machine-gun nests. Some of the lead companies suffered 50 percent casualties in the morning engagements alone. Nevertheless, the Canadians pushed into Bernieressur- Mer. The neighboring North Shore Regiment landed in front of St- Aubin-sur-Mer, followed ashore by 48 Royal Marine Commando. The mission of the latter was to push through Langrune-sur-Mer and link up with neighboring British forces on Sword Beach. However, heavy casualties during the day’s fighting prevented this from being realized.

The 8th Brigade was followed ashore by the 3rd Infantry Division’s main reserve, the 9th Brigade. These additional forces helped to provide the momentum to push out of the seafront villages and farther inland. A major problem by the early afternoon was heavy congestion in the beachhead area because of the volume of troops and equipment arriving, combined with the constricted nature of the beach with its confining seawalls. By the afternoon, the North Nova Scotia Highlanders had reached Villons-les-Buissons and the Queen’s Own Rifles had reached Anisy.

The landings on Juno Beach elicited one of the few major German counterattacks of the day, a disorganized attempt by the 21.Panzer- Division to push from Caen to the sea on the eastern flank of the Canadian positions. Although small elements of the division did reach the coast, they had practically no effect on the day’s fighting."