This blog post examines the events on Gold Beach.

"The British assault on Gold Beach was conducted by the 50th Division with two brigades in the initial assault waves. As on the other beaches, DD tanks were supposed to constitute the initial wave. However, rough seas delayed their release, and so they arrived on shore along with the infantry in landing craft and specialized armor of the 79th Armoured Division landing in LCTs. 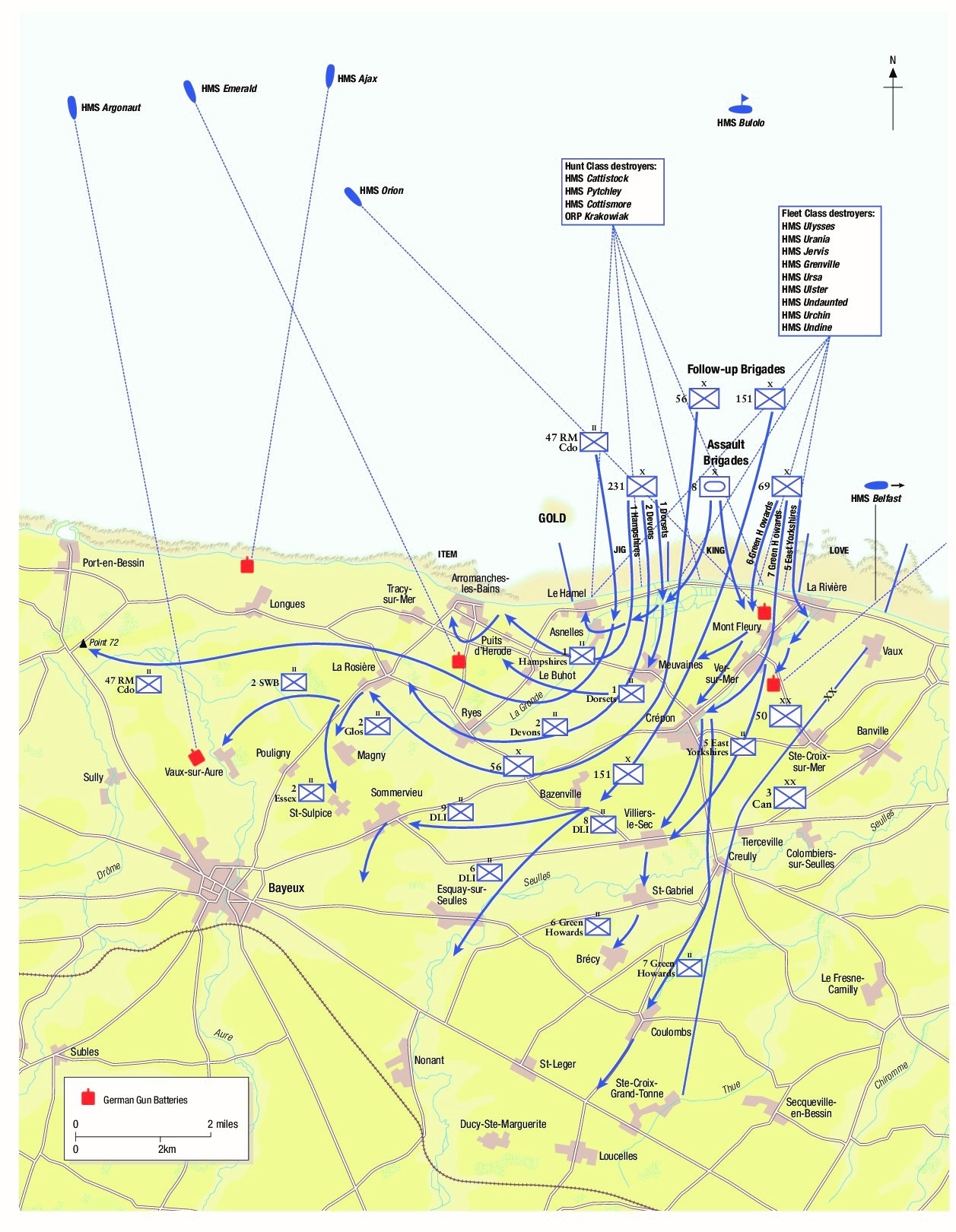 The western (right) flank of the landings against Jig Green Beach were conducted by the 231st Brigade. This area had a significant concentration of German bunkers around the sanatorium that had not been eliminated by the prelanding bombardment. To make matters worse, the accompanying Sherman DD tanks were slow to proceed off the beach and intended fire support from Royal Marine Centaur tanks was also slow in arriving. As tanks and infantry came ashore, they were pounded by the 75mm gun and a supporting 50mm gun. As a result of these strongpoints, much of the advance in this sector was accomplished by moving around the Le Hamel strongpoint. The steel-reinforced concrete of these gun bunkers was too thick to be penetrated by either the 75mm gun of the Sherman tanks or the Petard launcher on the Churchill AVRE tanks. The only way to knock them out was by a precise shot through the open gun embrasure, or an attack on the rear of the bunker, which had a large and vulnerable steel access door. Eventually, a Churchill AVRE tank of the 82nd Assault Squadron made its way around the main gun bunker and put it out of action with a Petard round fired against the rear steel door.

The 1st Dorsets, farther east of the Le Hamel strongpoint, made much better progress inland and were followed by the brigade’s reinforcing battalion, the 2nd Devonshires landing around 0815hrs. These two battalions, along with 47 Royal Marine Commando, began to curl to the west. Since this was the westernmost of the British/ Canadian beaches, one of its major tactical objectives was to push westward toward Port-en-Bessin to link up with the American forces on neighboring Omaha Beach. Later in the day, the 231st Brigade was hit by German counteratttacks by the 352.Infanterie-Division, delaying a link-up with the US Army until D+1.

The eastern side of the Gold Beach assault was conducted by the 69th Brigade with the 5th East Yorkshires on the left (eastern) flank and the 6th Green Howards on the right, with the 7th Green Howards as the reinforcing battalion. The sea in this sector was so choppy that the DD tanks were landed directly ashore by their LCTs. The German defenses were strongest in the hamlet of La Riviere, but one of the most troublesome gun bunkers was eliminated by a Sherman flail tank from the Westminster Dragoons which placed a well-aimed shot directly into the embrasure. While the 5th East Yorkshires were entangled in the three German strongpoints around La Riviere, the 6th Green Howards pushed in from the beach against more modest German defenses. The German artillery battery on Mont Fleury was cleared, and supporting tanks were soon approaching the road network behind the beach.

A major problem in this sector was the relatively narrow access areas off the beach, since the area west of King Red was obstructed by coastal marshes and a flooded zone immediately behind the beach. This slowed the process of pushing follow-on forces off the beach to speed the assault inland. By midday, the beach was relatively secure and the 56th Brigade arrived to push inland toward Bayeux. The progress out of the bridgehead was slow and the brigade advanced about 4 miles in five hours, setting up night-defense positions short of Bayeux, its D-Day objective.

The other reinforcing unit, the 151st Brigade, came ashore on King Beach and proceeded inland to the left (east) of the 56th Brigade with an objective of seizing the main road net in the vicinity of Bayeux. The brigade made a substantial penetration during the day’s advance, short of the Bayeux highway. The 69th Brigade, having fought its way out of King Beach earlier in the morning, made good progress in the afternoon, albeit short of the Bayeux road. By day’s end, the 50th Division had a solid foothold on Gold Beach, had repulsed several German counterattacks, but was still short of its objectives of Bayeux and the Bayeux highway at nightfall."