Today on the blog, David Campbell joins us to discuss his new book US Airborne Soldier vs German Soldier, and the evolution of airborne attacks during World War II.

Dropping in on the Germans. The Evolution of Airborne Attack & Defence, 1943-44

The formation of the airborne units in the US army was something of an evolutionary process, but a generally beneficial one that saw small highly-trained cadres of volunteer paratroopers gradually expand into highly capable divisions of parachute and glider infantry. Initially spurred on by the examples of German airborne operations during the invasions of France and the Low Countries in 1940, compounded by the spectacular if bloody coup that was the assault on Crete in 1941, air-delivered forces were not something any army could afford to ignore. Within the somewhat hidebound US army establishment there was little consensus about the strategic impact that such forces could have, with disagreement from the time of their formation over the sorts of operations that such a force was best suited to undertake, as well as why ordinary infantry couldn’t do the job just as well. 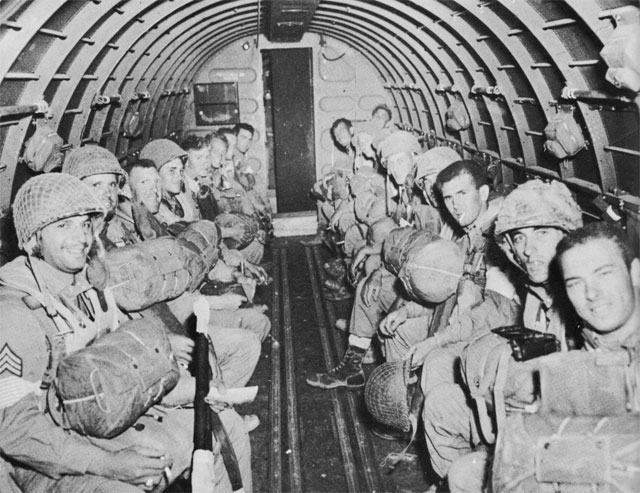 US paratroops bound for Sicily

Probably the single most important figure in the evolution of US airborne doctrine was James Gavin, a West Point graduate, later instructor, who possessed a flair for tactical innovation and joined the 503rd Parachute Infantry Battalion as the commander of C company in August 1941. He proved to be the right man in the right place at the right time, understanding the need for airborne forces to develop a coherent doctrine that would not only define their role in the operational environment but also establish their distinctiveness and value in relation to the divisions of ‘straight leg’ infantry. The importance of the latter point should not be underestimated, as there was no shortage of senior officers in the US Army who were far from convinced of the utility of such expensively selected, trained and equipped troops even in early 1943. Gavin drafted the manual of airborne warfare, ‘FM 31-30: Tactics and Technique of Air-Borne Troops’, outlining within its pages the operational and tactical factors that should determine how and when airborne forces should be used to best effect. Much of what he wrote was proven correct in combat, and most of his doctrine outlasted the war, defining parachute and airborne operations for decades to come.

For the Germans, the need to develop systems to counter large-scale airborne incursions became an unpleasant reality for the Wehrmacht as it moved onto a more defensive footing towards the end of 1942. Even so, few specific measures were undertaken, and the Allied landings in Sicily (Operation Husky) showed just how slapdash the German approach had been. As badly scattered and disorganised as the jump of Gavin’s 505 Parachute Regimental Combat Team (505 PRCT) was, its troops were aggressive enough to overcome many of their initial tactical disadvantages, to take the initiative and throw back much larger and better equipped units from Panzer Division ‘Hermann Göring’. That unit, filled with inexperienced troops unfamiliar with the intricacies of combined operations and led by men who were generally more enthusiastic than they were competent, played a large part in the success of Gavin’s paratroopers.

The quality of Gavin’s men had compensated for the operational failings in the combat jump of 505 PRCT, and the overall success of the paratroopers in securing the zones behind the beachheads at Gela and Scoglitti, fending off German counterattacks that could have played serious havoc with the amphibious landings, proved their worth. For future operations there would be an understanding that airborne units, rather than being frittered away on localised tactical pursuits, ought to be committed as an operational force that would be at the disposal of the theatre commander, maximising their impact on the battlefront. 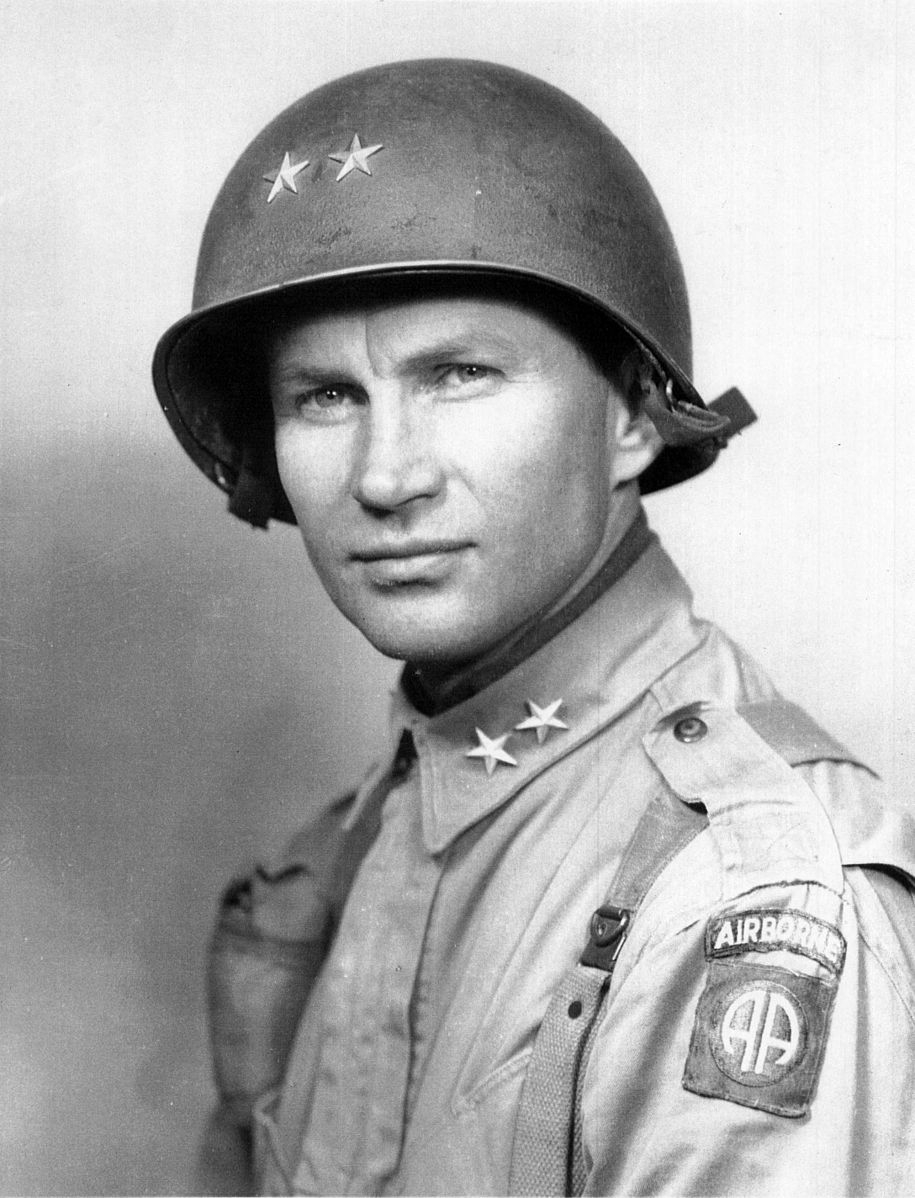 Sicily, indeed, proved to be the key learning ground for the Germans as well, who  realised that paratroopers needed to be overwhelmed with great speed and overwhelming power to ensure that the ‘infection’ of an airborne incursion did not have a chance to take root. Rommel, taking charge of the German defences along the Atlantic wall in early 1944, understood that fending off the airborne element of an allied invasion was not something that could be left to chance, leading him to establish a system of physical defences supplemented by quick reaction units. The defences were designed to disrupt potential landing sites, principally of gliders, with the quick reaction units positioned to move against and annihilate the lightly-armed airborne troops before they could establish themselves or link up with units from the amphibious invasion force.

In the event though Rommel’s obstructions to landing grounds caused some problems, they were too few in number and, after Allied reconnaissance discovered their positions in the week prior to the invasion, generally avoided. The quick reaction units, despite some gallant actions, were too few in number and not nearly well trained enough or supported to deal decisive blows to the paratroopers they suddenly found in their midst on 6 June. The experience of the 91. Luftlande-Division, who bore the brunt of the fighting against the 82nd Division, was telling: the men had no experience in anything much larger than platoon-level operations which led to basic mistakes and meant that it could not easily adapt to failures of communication or command, that latter of which was particularly acute as the division’s commanding officer, Generalleutnant Wilhelm Falley, was killed in the first hours of the invasion by a marauding band of paratroopers.

The Allied landings at Eindhoven, Nijmegen and Arnhem proved to be a mixed bag, but the German response at all the landing sites was generally much more pointed and effective than at Normandy; anti-airborne defences were seen as impractical (in time, effort and materiel) and thus not used, the defenders instead relying on rapid counter-attacks led by armour that would ideally overwhelm the airheads before they could be properly established. The 82nd Airborne Division, given the task of securing the bridges over the Maas and Waal rivers at Grave and Nijmegen respectively, had a vast amount of ground to seize and defend, a fact that certainly contributed to their failure to take the road bridge at Nijmegen, which was practically undefended at the time of their landing. Such a rare failure of initiative had serious consequences, allowing an ad-hoc collection of units built around SS-kampfgruppen from 10. SS-Panzer-Division ‘Frundsberg’ to establish themselves in the north of the city, forcing the 82nd into a prolonged and bloody effort to eject them and seize the road and rail bridges. The situation was considerably worse nine miles further up the road at Arnhem. 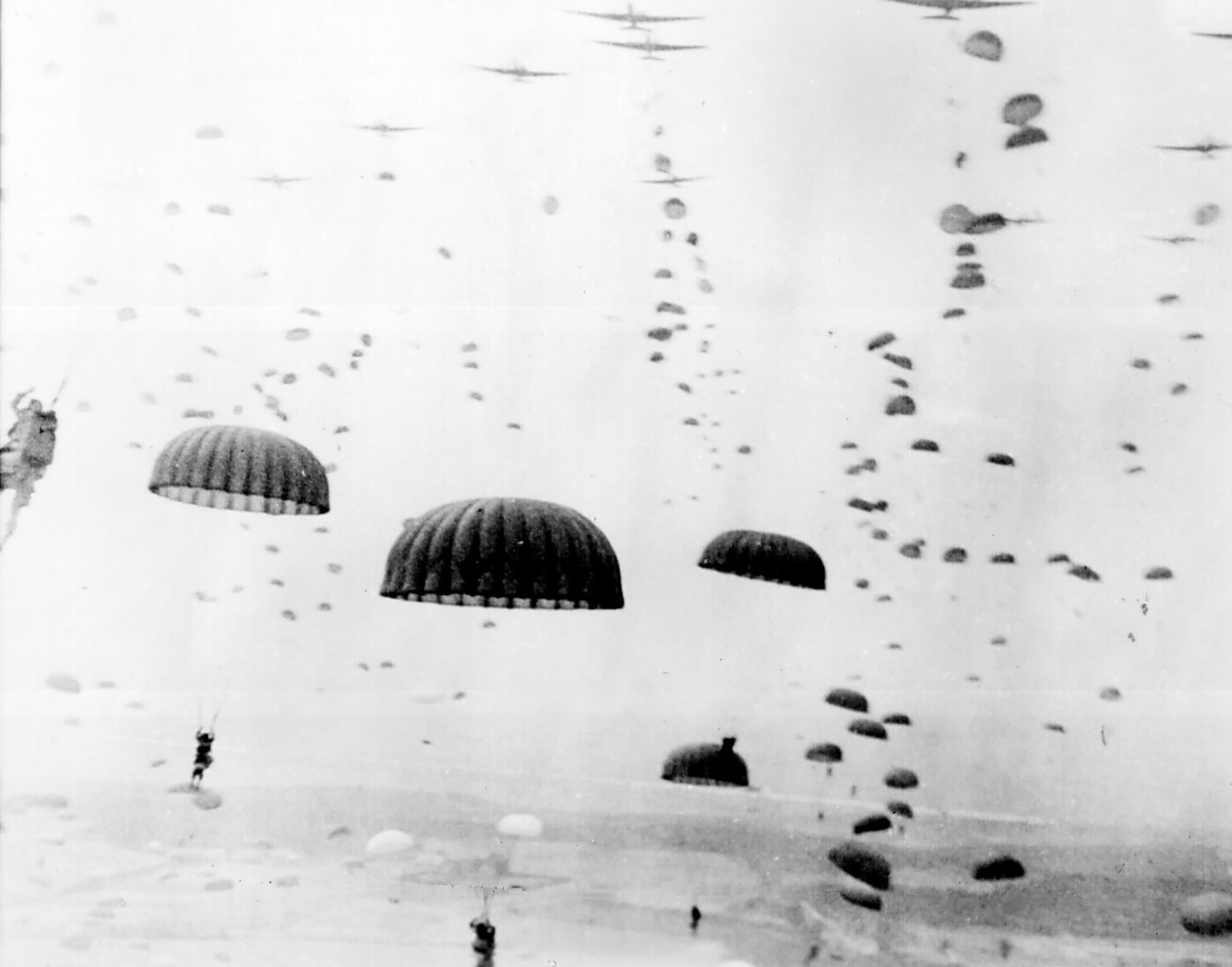 Waves of paratroops land in Holland

To be involved in an airborne operation, as an attacker or a defender, could be an exhilarating and frightening experience, one in which individual initiative and skill counted for a great deal. Colonel James Gavin, who led the 505th Parachute Infantry Regiment into its first operation in Sicily (and who would go on to command the 82nd in Normandy, Holland and beyond), wrote an entry in his diary just before he set off from the 505 PRCT’s airfield in Tunisia: “We are in for one hell of a fight…I love the prospects but feel as scared as I did on my first jump. It is going to be exciting’ (quoted in LoFaro 2011: 74).

Read more about the development of the American airborne forces and the German countermeasures that evolved in response to the threat of Allied airborne landings, in US Airborne Soldier vs German Soldier.