Today's guest blog post is from Thomas McKelvey Cleaver, author of Tidal Wave: From Leyte Gulf to Tokyo Bay. Here Thomas discusses how the USS Laffey earned the nickname 'The Ship That Would Not Die' during World War II.

USS Laffey (DD-724) fought one of the epic battles of the radar picket line on April 16. The battle began at 0744 hours when radar picked up a single bogey that turned out to be a Val snooper that was driven off by 5-inch gunfire. At 0829 hours, radar picked up a swarm of incoming bogeys. Lookouts soon spotted over 50 Vals, Judys, Kates and Oscars, which were the formation that the Corsairs of VF-10 and VMF-311 would fight it out with.

Four Vals broke off from the formation and split into two two-plane formations, with two Vals on the starboard bow and the other two angling astern. The two forward 5-inch mounts opened fire and splashed the two Vals ahead, but the two astern commenced their attack. Flying low, one Val caught a landing gear in the water and nosed in. Converging gunfire from Laffey’s 20mm and 40mm guns, and 40mms aboard LCS-51 destroyed the fourth. 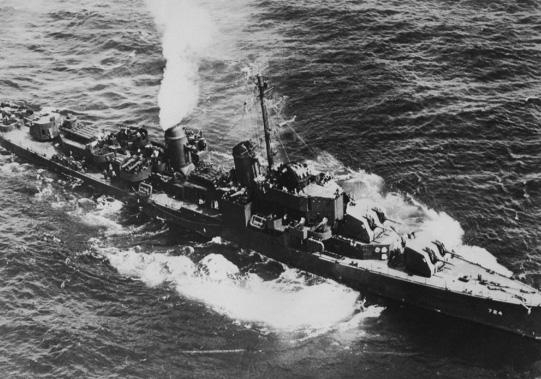 Two Judys came in low and straight on the starboard beam. The starboard amidships 40mm mount shot down the first and the destroyer turned to unmask the forward 5-inch guns, which hit the second Judy, but not before its bomb dropped and exploded close aboard, showering the weather decks with shrapne, injuring two sailors in the 40mm mount.

The seventh and eighth kamikazes, a Val to port and a Judy to starboard, bored in. Laffey’s gunners knocked down both. As the Val closed in from dead astern, it clipped the after deckhouse and drenched the ship’s stern with aviation gasoline, touching off fires that were quickly doused before crashing alongside. By 0842 hours, Laffey had downed eight for eight.

The ninth attacker, another Val, was the first to crash the destroyer, smashing a 20mm gun tub atop the after deckhouse and killing three. The deckhouse again caught fire, throwing off black smoke that concealed the tenth attacker, a Val approaching from dead astern. The airplane hit the main deck aft, spilling fire across the ship.

At 0847 hours, stern 5-inch mount gun captain Gunner’s Mate 1/c Lawrence “Ski” Delewski spotted a Val off the starboard quarter that was so low and so close that only the 20mm gunners on the stern had time to shoot. Their rounds broke off pieces of the wing and fuselage but momentum carried the Val into the fantail where it skidded past the 20mm mount and struck Delewski’s mount. Six sailors inside were killed when the engine wedged in the gunhouse. The impact slewed the gunhouse to starboard, wrenched the port gun skyward and peeled back the gunhouse top deck. Delewski flew clear and landed 15 feet forward of the remains of his guns.

Laffey’s stern was now engulfed in fire. Running at flank speed only fanned the flames, so Captain Becton was forced to slow, but still managed to maneuver to dodge another oncoming Val on the starboard quarter. The planes bomb came loose however, and the resulting explosion jammed the ship’s rudders to port, locking Laffey into a 26-degree port turn.

Four FM-2 Wildcats from USS Shamrock Bay (CVE-84) arrived and shot down six attackers before running out of ammunition. At about this time, the Fighting-Ten Corsairs arrived overhead, but the sailors on Laffey were too busy to notice them. Even as the fighters went after the attackers, two more planes and another bomb struck the destroyer. When Lt(jg) Carl Reiman, leader of the Wildcats, who had shot down a Val and two Kates while defending Laffey, returned to Shamrock Bay, he reported that the destroyer was a goner.

Laffey had now lost power to her main batteries forward, reducing her defense to four 20mm guns. Conditions were so bad that the captain contemplated abandoning ship. With 30 kamikazes still overhead, the two Fighting Ten Corsairs were joined by Clarke’s four, and shortly thereafter the twelve from VMF-311. One Marine flew so low chasing an inbound Val that he sheared off a radar antenna and sustained such damage he was forced to bail out.

At 0934 hours, USS Bryant (DD-665) arrived. Maneuvering at flank speed, her gunners splashed several kamikazes before one crashed the base of her forward superstructure, knocking out the CIC and radio room, killing 34 and wounding 30 more. Bryant managed to limp to Kerama Retto on her own.

At 0947 hours, as the Corsairs continued their battle, Val number 21 dived on Laffey and dropped a bomb that wiped out the port 20mm gun mount, killing the crew. Minutes later, the 22nd attacker in 80 minutes was destroyed in its dive by 40mm fire from LCS-51. The sky was finally clear of attackers as the Corsairs winged away. The crew set about firefighting in an attempt to save their ship. By 1100 hours, Laffey was down by the stern when LCS-51 came alongside to assist in firefighting and to take off wounded. LCS-51 took Laffey in tow and by the next day “The ship that would not die,” as Laffey came to be known, entered Kerama Retto’s Boneyard. She had survived the most determined kamikaze attacks of the war, hit by four bombs and six kamikazes, wounding 72 crewmen and killing 31.

Temporary repairs were rushed and Laffey departed three days later for Saipan, arriving on 27 April. On 1 May she got underway for the Todd Shipyard at Tacoma, Washington, via Eniwetok and Hawaii, arriving in Tacoma on 24 May, where she eased alongside Pier 48, six weeks after her ordeal in the East China Sea. The Navy delayed sending Laffey into the shipyard until nearly 93,000 civilians could visit the destroyer and see for themselves the results of the kamikaze attacks at Okinawa and the bravery of her crew. Her repairs were completed the week of the formal surrender in September. After serving in the Korean War and throughout the Cold War, Laffey was the last Sumner class destroyer to be decommissioned, 9 March 1975. She was designated a National Historic Landmark in 1986 in recognition of her fight at Okinawa and is today moored in Charleston, South Carolina. 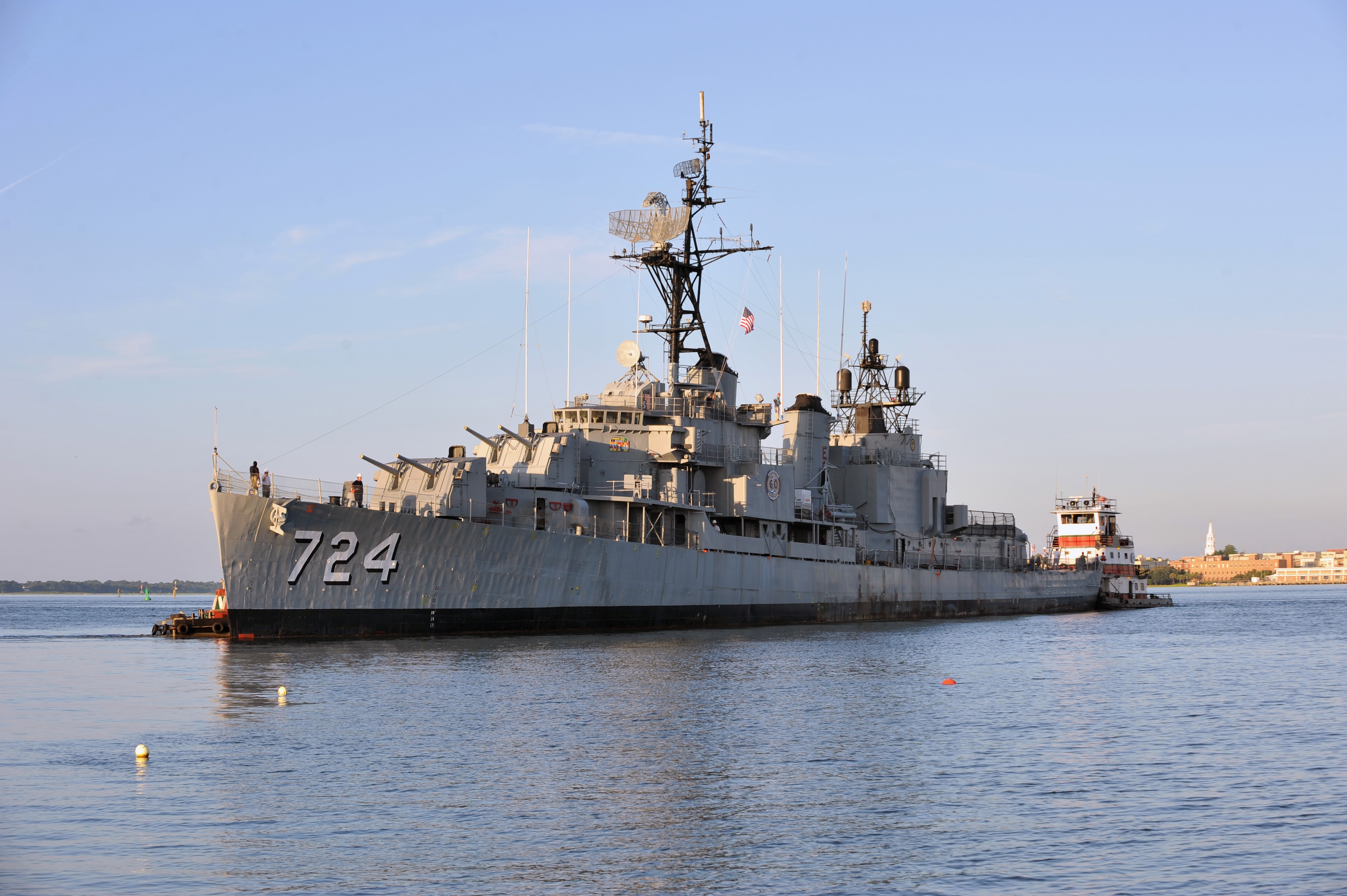 Tidal Wave is now available to pre-order by clicking here. You can also order Thomas's other book on the US Navy's central Pacific Campaign, Pacific Thunder here.

How did the Musashi reach her fate?
Sinking Musashi

Who was Medal of Honor recipient Thomas J. Hudner Jr.?
Thomas Hudner and the Battle of Chosin Reservoir