In this blog series, Michael is giving us a sneak peek at Rebels and Patriots, the upcoming wargaming rules for North America written by Michael Leck and Daniel Mersey. Be sure to check out Michael's personal blog for more information!

For the second blog in our series on Rebels and Patriots I’ve decided to share a little more about the rules in the game and our thoughts regarding them. The miniatures in the pictures are converted Perry and Vitrix minis from my Mexico-American War project that I started due to the playtest of the Rebels and Patriots rules. It started as a small project but ended up as 180 infantry, 24 cavalry, and three guns! 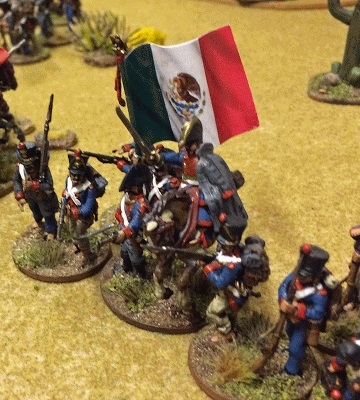 A Mexican Officer attached to a unit of Line Infantry

I have a background in role-playing games and always like to be able to get some kind of campaign feel to my wargames. For The Pikeman’s Lament I introduced a larger focus on the Officer of your companies, with the development of the Officer linked to his battlefield deeds. It seems people liked this concept, so Dan and I decided to stick with it.

We use more or less the same rules for your officer, with honour gained depending on how good or bad your Officer and company achieved their objective during the scenarios. The officers give bonuses to units close by and we introduced a new stat for them – Tactical Value – that grants a bonus when you determine the aggressor and defender. If your officer is more tactically savvy they will have a greater chance to influence whether they will be the aggressor or defender. 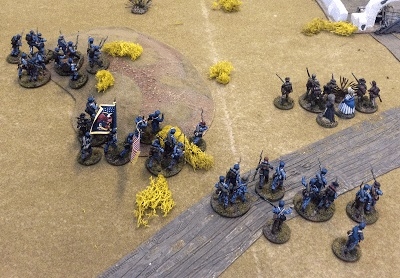 As always, the basic company is 24 points, with different troop types available at a base cost of 2, 4, or 6 points. They have a bunch of different options to allow you to customize them as you wish, to represent different troops during the era you are gaming. Be sure to look at the troop types in their own historical context – you can’t necessarily compare one Line Infantry unit from the American War of Independence with another, even if they use the same Troop type.

For example, if you are gaming the AWI and want to run a Bunker Hill inspired battle you have to think about how to best represent the different troops involved. The American Militia and the British Regulars would be represented by the same troop type – Line Infantry – but here is where the options come into play.

The American Militia would not be as good as the British regulars, but how can you represent that in the Rebels and Patriots rules?

In this case, we may decide that the British Regulars are the norm and use the basic Line Infantry stats for them. We then have different options for downgrading the American Militia; we could make them Green to give them a negative modification on Activation and Morale, or give them the Timid trait to represent their lack of bayonets and reluctance to face a British charge.

So, I urge you to take a moment to think about how to let the abstractions in the rules represent different historical effects, such as rifled muskets with Minié balls compared to smoothbore muskets with buck and ball. If the rifled muskets are considered the norm then the smoothbore would need to be represented by downgrading the unit with the Poor Shooter option. 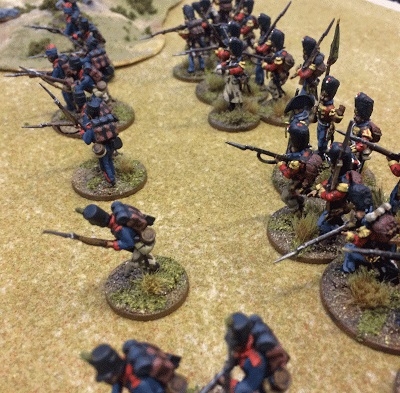 Mexican Grenadiers in Close Order formation screened by Mexican Skirmishers, all by the drill book

By this point in history, we think it makes more sense that battles would see units doing more things, unlike the less well-drilled armies of earlier centuries. Since the activation-roll reflects the command and control of your force, we decided to let all units have a chance to be activated each turn.

When a unit fails its activation roll, that does not end your turn. The turn ends when you have tried to activate all the units that you wish to.

We also decided to only use one value for activations and morale which is then modified depending on circumstances, for instance morale effects etc. If you roll 6 or more on 2D6 you have succeeded with your Activation.

In short, there is a 72% probability to activate a unit so long as no positive or negative modifications are in play. That might feel like a pretty good chance, but don’t be surprised if you often fail your activations at the most crucial moment!

To increase your chances of success we have tried to take into account things that we feel effected linear warfare, like the Officers influence on the unit, the unit’s formation, and its training/experience. A veteran unit, in command and in a Close Order formation will succeed 97% of the time. 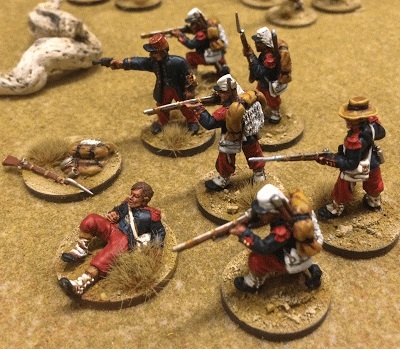 French Legionnaires on a Mexican adventure, the unit has 2 disorder markers so is in a bad state and needs to be Rallied on their next activation. (Minis painted by my mate Andy)

To show the attrition of battle, units gain disorder markers and if a unit gains too many they will Rout and be removed from the game. The disorder makers impact a unit’s performance, and even if some officers will continue the fight with a disordered unit it might be a much better idea to try to Rally them and get back their combat effectiveness. This has the added benefit of minimizing the risk that the unit will turn around and run for home. Once again, experienced troops in good command and formation will endure morale effects much better.

Excited about recreating some of the conflicts that forged a nation? Preorder your copy of Rebels and Patriots today!