Today, 13th August 2017, marks the 80th anniversary of the beginning of the Battle of Shanghai, the largest and bloodiest battle of the Second Sino-Japanese War. In today's post, Benjamin Lai, author of CAM 309: Shanghai and Nanjing 1937, writes about one of the heroes during the conflict, Bernhard Sindberg, who saved thousands.

In the midst of a collapsing Nanjing in 1937, 20,000 people owe their lives to a remarkable 26-year-old Dane, by the name of Bernhard Sindberg (1911–1983). The Chinese in Nanjing called him Mr Xin or Xinbo, for none could pronounce his name. Born in Aarhus, Denmark to a wealthy cheese dealer, the young Bernhard must have inherited a mischievous gene for he was never satisfied with a quiet life in rural Denmark. A born escapologist, Bernhard’s first attempt to run away was at the tender age of 2. He made it as far as the gutter at the other end of the town. The second time, with the aid of a bike, he managed to reach the other end of the country to join a scout’s Jamboree. The third time he made it as far as Hamburg aboard an American steamer before being exposed as a stowaway. His parents’ divorced in the 1930s and his father lost his business due to the Great Depression. Under a cloud, Bernhard wanted out of Aarhus. At 17, Bernhard finally managed to escape, this time to America. Three years later he joined the French Foreign Legion but found the Moroccan desert a bore. After ten months of service, he went AWOL and escaped on a ship headed to Shanghai. While on board, he got into a fight with a member of the crew and found himself locked up for most of the trip to China! 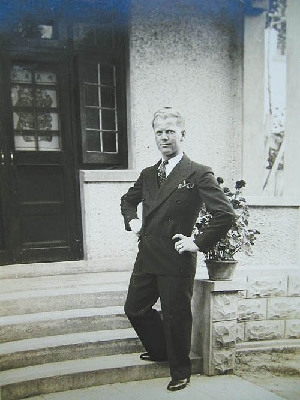 Shanghai was heaven for an adventurer like Bernhard. During his time there, he hopped from job to job including a stint as a “demonstrator” for a Danish arms merchant hoping to make a fortune from selling Danish guns to the Chinese. When the Japanese invaded Shanghai in August 1937, Bernhard worked as a driver/assistant to the British journalist Pembroke Stephens (1903–1937) who reported for the Daily Telegraph. For weeks the pair drove around Shanghai, writing about the war. They had climbed a water tower and were observing the Japanese air strike on the city, when the Japanese shot and killed Stephens, presumably mistaking him for a sniper. Bernhard found himself unemployed and due to his previous connection with guns, started work as a chief security officer for a large Danish cement factory (F.L. Smidth) at Xixia, about 15km from Nanjing. In the factory, Bernard met the only other foreigner in the factory, the German Dr Karl Günther (1903–1987) who spoke perfect Chinese. Karl was born in China and was in Nanjing as the manager of the factory, a job he held until 1950.

Eleven days into the job, the Japanese invaded and the atrocities began. Bernhard travelled around Nanjing and the surrounding area, documenting the atrocities with his camera.To avoid Japanese bombing, Bernhard and Karl painted, what Bernhard later proudly described as the world’s largest Dannebrog and an equally large German swastika on the roof of the factory. The Chinese soon became aware that the cement factory was a haven from the Japanese and some 6000 took refuge. With the help of some Chinese nurses, Bernhard created a small clinic in the factory and did his best to provide patients with food, medicine and necessities from the Red Cross. Not content with saving 6000 people, Karl and Bernhard went to Xixia Temple and created another “safety zone”, saving another 15,000 people, by fencing off the temple with a series of neatly hand painted Dannebrog and Swastika flags. Bernhard had, after all, trained as a sign writer before he left for America!

After almost three months, the Japanese ran out of patience, and Bernhard was deported from China and forced to return to Europe. Arriving in Italy, Bernhard was met by his father, for throughout his escapade in Nanjing Bernhard had been corresponding with a friend in Aarhus who promptly re-told the story to the local newspaper, not realising that Sindberg Senior had moved professions from a cheese merchant to a newspaper editor.

On the way home father and son went to Geneva, where Bernhard was thanked by the Chinese delegation to the League of Nation.  However Bernhard asked that the reporters not include his name in their articles as he was still afraid that the French Foreign Legion would still be looking for him! 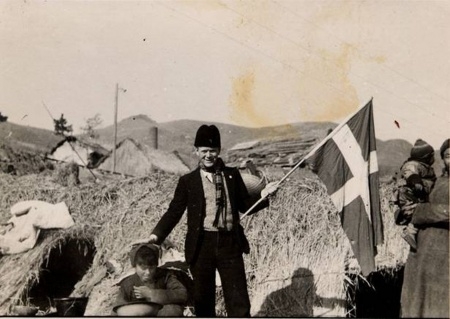 Bernhard later immigrated to the United States and became the captain of an American merchant vessel. During World War II, he served in the US Navy and was received by President Harry S. Truman for his contribution to the war effort. Bernhard never spoke about his time in Nanjing to anyone and always avoided the limelight. Because of this, Bernhard’s remarkable exploits may have remained hidden if not for the publication of Rabe’s diary in 1997 when people first heard of a Dane by the name of Mr Xin.

In 2000, a Chinese government sponsored exhibition on the Nanjing Massacre arrived in Aarhus. The local newspaper Aarhus Stiftstidende ran an article in search of people who knew a Dane who had been in Nanjing in 1937–1938. 74-year-old Bitten Stenvig Andersen was looking forward to her daily crossword when she spotted the appeal in the newspaper. Bitten knew immediately that it was her older brother. She contacted the Chinese embassy in Denmark, and as they say, the rest is history.

A special yellow rose known as a "Sindberg Rose" was presented by Queen Margrethe II of Denmark to the Nanjing Massacre Memorial Hall in memory of Bernhard Sindberg. Inside the museum, a silk scarf with the words “Brave Deeds of a Good Samaritan” given to Bernhard by the people he saved sits alongside his passport and pictures of him and Karl.

To read more by Benjamin Lai, see his previous blog posts on the conflict, The Battle of Shanghai 1937 and John Rabe and Nanjing 1937. His book CAM 309: Shanhai and Nanjing 1937 is now available to order through our website.