In the lead up to his newest book, With Their Bare Hands, Gene Fax examines the strange paradox of US-invented machine guns. This is the third part of a three-part article describing how American inventors developed almost all of the machine guns used in World War I, yet the US mostly ignored the weapons until the very eve of its entry into the war. Part I dealt with the Maxim and Benét–Mercié guns, Part II with the Lewis and Chauchat.

Not having a machine gun of its own as it entered the war, the US Army had to acquire them from their allies. The light gun was the inferior Chauchat, made by the French (see previous article). The principal heavy weapon was the Hotchkiss, also made by a French firm but developed by an American, Laurence V. Benét, an engineer working for the company's founder, B. B. Hotchkiss, also an American. It was based on a Russian air-cooled design that included prominent fins around the barrel. It was fed by a tray that held 24 rounds; so although it could fire at up to 600 rounds per minute, it had to be constantly reloaded. Simple in design, it was made of only 38 parts and could be disassembled without tools except for the barrel and the cylinder. With its tripod the gun weighed 110 pounds. The tripod could not be lowered, so it was difficult to conceal in open country.

The US Navy tested an early-model Hotchkiss in 1896. It failed due to faulty materials and manufacturing but the Navy liked the design and suggested that the firm hire Edward Parkhurst, a Connecticut engineer, to help solve its problems. His recommendations yielded the Model 1897, which became the standard Hotchkiss weapon. Its reliability and firepower made it popular with the Americans. In France the AEF purchased 5,255 of them, making it the heavy machine gun most used by American soldiers. 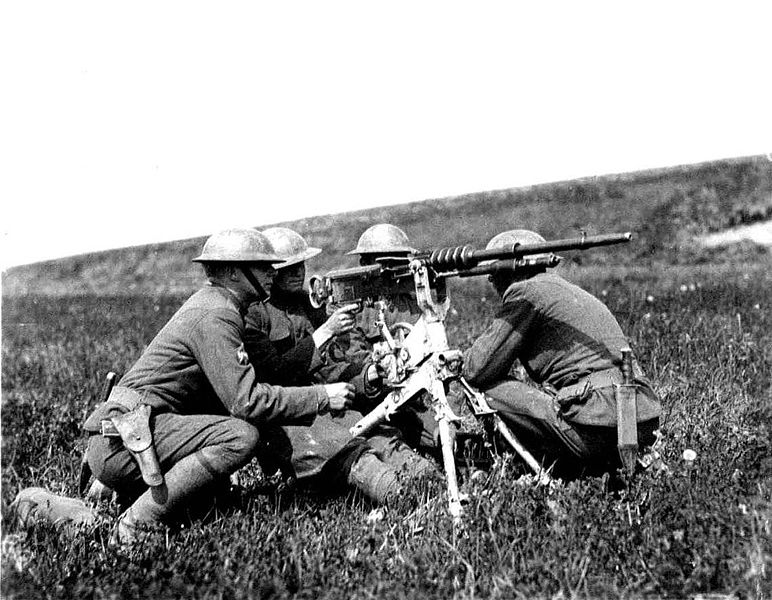 US Army soldiers operate the Hotchkiss gun during World War I

Only one American inventor did not see his automatic weapons ignored by the War Department. John M. Browning was born into a family of gunsmiths in what was then Utah Territory. In 1884, at the age of 29, he patented an improved lever action for rifles; he sold it to Winchester, beginning a long and profitable relationship with that company. In 1889, while firing one of his rifles in a salt marsh, he noticed that the muzzle blast deflected the reeds for quite a distance ahead. He realized that the exhaust gases could be used to power an automatic firing mechanism. Six years later he had developed a workable machine gun, manufactured by Colt, that fired smokeless cartridges. After testing, the Navy ordered 50 of the Colt/Browning guns. This was the first time the United States Government had procured an automatic weapon. It was quickly and successfully used to defend the foreign legations in Peking during the Boxer Rebellion.

But the 1895 gun had numerous disadvantages: a delicate mechanism, a propensity to clog and jam, poor aiming caused by vibration, and a downward-swinging gas lever that prevented the user from firing in the prone position. As the US entered the war, no other models were ready for quick delivery, so a large order was placed. By the Armistice 1,500 guns had been delivered, but by then the recoil-actuated models had made them long obsolete.

By 1900 Browning had concluded that a recoil-operated system was best, and patented a water-cooled model in 1901. He then let the project lie, as the many other firearms he had designed were selling well and the government showed no interest. In 1910 he picked it up again, making improvements to the 1901 model but using the same basic mechanism. Browning first demonstrated his Model 1910 in February, 1917, outside Washington, in front of high-ranking American and foreign army officers, members of Congress, and the press. Although it received rave reviews, the Army felt the gun required further testing so in May, at the Springfield Armory, Browning fired off 20,000 rounds at 600 rounds per minute without a stoppage. An Army board quickly recommended it for immediate purchase. Besides its reliability, they liked its simple design; it could be dismantled and reassembled by a blindfolded operator in a few minutes. Its only drawback was that it would take time to produce in sufficient numbers. Contracts were let with Colt, Remington, and Westinghouse for a total of 45,000 guns, and almost all had been produced by the time the war ended.

The prolific Browning (in his lifetime he was credited with designing 13 pistols, 11 rifles, 6 machine guns, and many other weapons) also produced a model of a machine rifle that would meet the need for “walking fire”; that is, a soldier could fire it while advancing against the enemy. The gun, chambered (like his heavy machine gun) for the standard .30-06 rifle cartridge, was air-cooled and gas-actuated, fired at 480 rounds per minute, and carried a 20-shot magazine. Weighing only 16 pounds – as compared to nine pounds for a typical bolt-action rifle – it was supported by a shoulder sling and fired from the hip as the soldier was walking. Alternatively, it could be held and fired like a conventional rifle. Dubbed the Browning Automatic Rifle, or “BAR,” it debuted in 1917 at the same February and May firings as Browning’s heavy machine gun. It met with quick approval and a contract was awarded to Winchester for 25,000 units. Company lore has it that their engineers took Browning’s hand-made prototype and generated all of the production drawings and specifications over a single weekend. By July 1918 the company had delivered 13,000 BARs, and by the end of the war more than 40,000 had reached France. 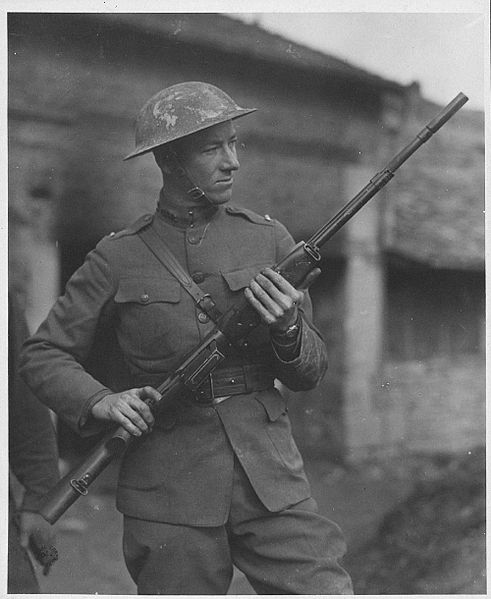 Both Brownings began arriving at the front in July when the 79th Division, the first to receive them, disembarked at Brest. Sturdy and reliable, they were an immediate success, and as more became available, those units that could get them abandoned the Hotchkiss and the Chauchat in favor of the new weapons. In the Meuse–Argonne offensive, which in its early days suffered from poor artillery support, Browning’s guns were often credited with taking German positions and breaking up counterattacks. Unfortunately, transportation bottlenecks prevented most of the weapons from reaching the soldiers’ hands before the Armistice.

By any conventional measure, the Army’s automatic weapons program in World War I was a failure. For 30 years—from 1884 to 1914—inventions such as those of Maxim and Lewis languished in the US because, in the absence of a definable threat, the authorities could not decide what they needed. As war approached, the Army’s myopia, inertia, and internal divisions prevented it from committing even to models that were readily available. (President Wilson’s policy of strict neutrality, which until 1916 forbade anything that even looked like preparations for war, didn’t help.) As a result, the Army went to war with a paltry collection of obsolete misfits – 670 Benét–Merciés, 282 Maxim Model 1905s (long superseded by the Model 1915), and 158 of the 1895 gas-operated Colts. Only after war was actually declared did the War Department authorize the purchase of Browning’s two guns, too late to make a difference. So the AEF depended on the French for effectively all of its automatic weapons.

But there was a silver lining—a large one. Both of Browning’s guns, the BAR and the .30-caliber machine gun, along with its .50-caliber upgrade, turned out to be excellent weapons and, in their many variants, continued to serve the United States in World War II and far beyond.

With Their Bare Hands - General Pershing, the 79th Division, and the Battle for Montfaucon by Gene Fax is now available to order. Click on the link on the book title to purchase your copy!