Today, 27 October, marks the 75th anniversary of the conclusion of the Battle of Santa Cruz of World War II. Sometimes known as the forgotten carrier battle of 1942, Santa Cruz was an attempt by the Japanese to drive Allied forces from Guadalcanal, but both sides committed their surviving carrier forces to gain control of the waters.

Below is an extract from Campaign 247: Santa Cruz 1942 by Mark Stille, and looks at the Japanese attack on USS Hornet on the 26–27 October, the last US fleet carrier sunk by enemy action.

The Japanese had no intention of letting Hornet escape. Throughout the morning, Japanese aircraft monitored the progress of American attempts to salvage the carrier. Since TF-17 had no CAP, Hornet remained terribly vulnerable. At 1345hrs, the radar aboard Northampton picked up a group of aircraft to the northwest at 103 miles. This was the Junyo strike, which continued to linger to the northwest according to the radar track on Northampton. Later, at 1400hrs, the cruiser detected another group of aircraft to the northwest at 110 miles. This was the Zuikaku strike; both Japanese groups were attempting to find the undamaged American carrier operating to the north of Hornet as assessed by Nagumo’s staff. Finally, the Junyo strike abandoned this fruitless search and headed south. At 1513hrs, the strike leader spotted the damaged Hornet and with no other targets in the offing, decided to attack her. With the Japanese aircraft inbound, Northampton again cast off her tow line to Hornet and prepared to defend the crippled carrier. The six carrier attack planes armed with torpedoes all attacked from the Hornet’s starboard side. The strike leader skillfully placed his torpedo just aft of the two previous torpedo hits. The other five torpedoes failed to score, but the one hit was sufficient to increase the list to some 14 degrees and make any successful salvage operation unlikely. The successful torpedo pilot was shot down after his drop, as was another of the Type 97 aircraft. Five Zeros also did not return to Junyo. Next to find Hornet were the two carrier bombers from Zuikaku. These attacked at 1541hrs and scored a near miss.

With the list increasing to 20 degrees, Captain Mason ordered his crew to abandon ship just after the dive-bombing attack. During the early process of abandoning ship, the six Zuikaku carrier attack planes operating as level bombers with large 1,760-pound bombs executed an attack run at 1555hrs from 8,000ft off Hornet’s port quarter. One of the bombs hit aft on the flight deck but caused little damage. The rest missed astern. The final attack of the day occurred at 1650hrs when Junyo’s four carrier bombers arrived on the scene. One of the aircraft scored a hit forward of the island which penetrated the flight deck and exploded on the hangar deck causing a fire. 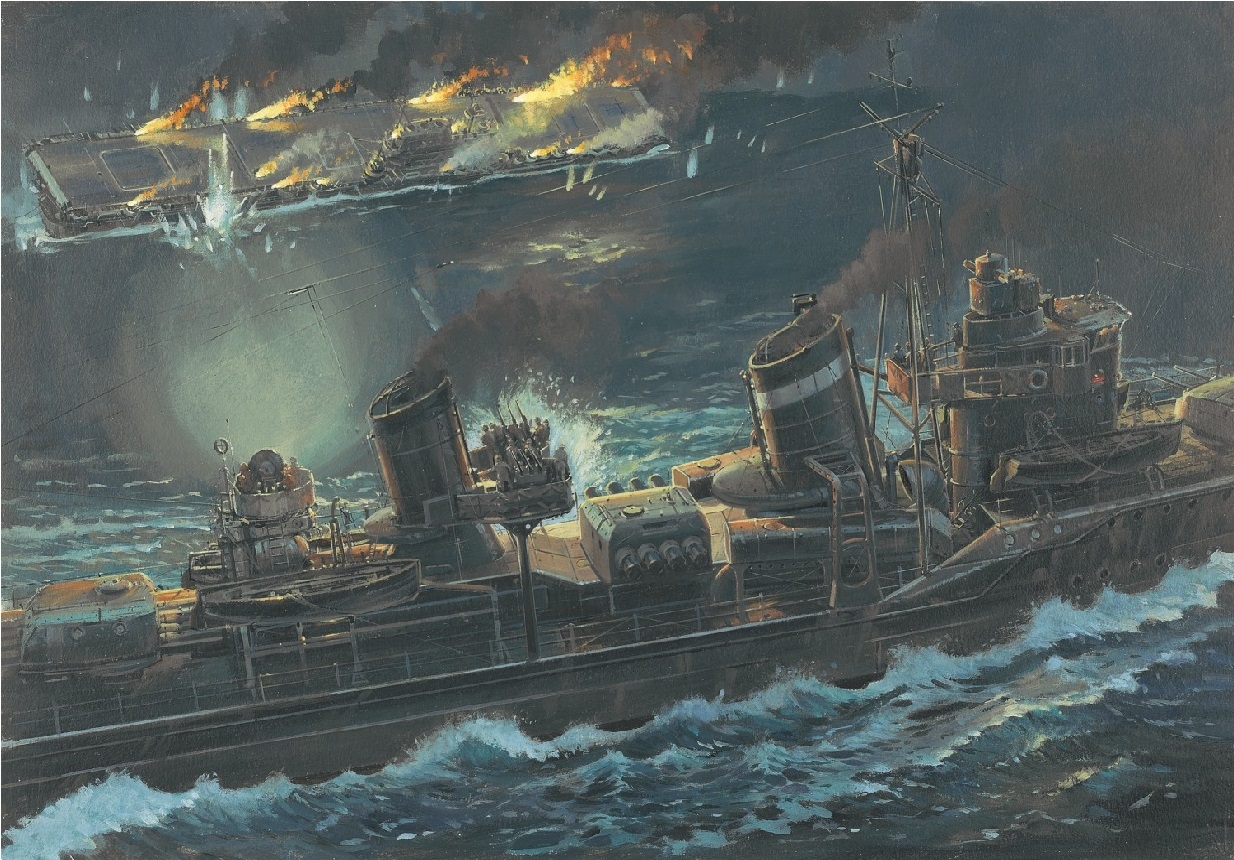 The end of Hornet

Hornet’s fate was decided. Mason was the last to leave the ship at 1627hrs. After the final air attack, Murray assigned the destroyer Mustin the task of sinking Hornet while the remaining ships of TF-17 steamed east at 27 knots. Mustin fired eight torpedoes into the carrier and four exploded. This did not have the immediate desired effect, so Murray sent destroyer Anderson to finish the carrier. She also fired her full load of eight torpedoes, and this time six were seen to explode. Still the carrier would not go down. Now the two destroyers pumped 430 rounds of 5in. shells into the carrier; this caused a fire throughout her length, but the ship still refused to sink. The two American destroyers departed at 2030hrs. At about 2100hrs, Japanese destroyers Makigumo and Akigumo arrived in the vicinity of Hornet. They confirmed her identity and determined the ship was obviously beyond salvage. They fired four more torpedoes into the blazing hulk. Hornet finally sank the next day at 0130hrs.

Thomas also recently wrote a blog piece on the US sinking of the Japanese battleship Musashi, click here to read more.