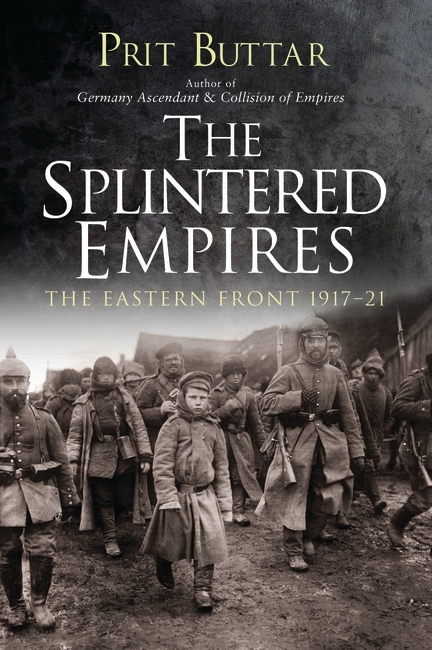 Ahead of the publication of The Splintered Empires, author Prit Buttar sets the scene for the conclusion to his Eastern Front series, which follows Collision of Empires, Germany Ascendant, and Russia's Last Gasp.

This year has seen the centenary of the Third Battle of Ypres, or Passchendaele, as it is often known. Just as last year, when the terrible slaughter of the Somme was commemorated and remembered, there have been ceremonies to remember the hundreds of thousands of men who struggled through thick mud to try to break the German lines. As with so many battles in this war, the loss of life was utterly disproportionate to the ground gained.

Throughout Britain and France, there are memorials to the men who died in the fighting on the Western Front. Even small villages have sad epitaphs to the fathers, sons and brothers who never came home. Many of the fallen lie in the beautifully tended war cemeteries of northern France and Belgium; others have no known resting place, but their names are remembered with sorrow and pride. In Germany, too, there are memorials to the fallen, usually less prominent than those in the nations of the victors; lists of names of those who fought in the Kaiser's armies, fighting for a Germany that had effectively ceased to exist before the Treaty of Versailles formally brought the war to an end.

But whilst western narratives concentrate on the huge battles that raged in the trenches of the Western Front, a conflict of greater magnitude was being fought in the east, where the armies of Imperial Russia fought against Germany and Austria-Hungary in a series of campaigns and battles that perhaps had a far greater effect on the future shape of Europe and the rest of the world than the fighting in the west. These were the campaigns that led to the dissolution of the Austro-Hungarian Empire and the creation of a multitude of states across Eastern Europe; Poland was reborn, securing territory from all three combatant empires and Finland and the Baltic States secured their independence from Russia. Perhaps of greater importance was the fall of the tsars and the advent of Bolshevik Russia, an event that would shape international relations for the majority of the century that followed.

The publication of The Splintered Empires marks the end of a project that started several years ago. The motive was to give the Eastern Front in the First World War the attention that it deserves. When I embarked on this, the original intention was perhaps a two-volume work, but it rapidly became clear that such an account couldn't do justice to the great events in Eastern Europe, and the result was four volumes, covering the conflict from its beginnings to the end of the 'wars of the pygmies' that rolled on into the 1920s. An understanding of these wars is important - many of the seeds of the Second World War were sown during this time.

Perhaps the greatest tragedy of the fighting in the east is that millions of men in the armies of Imperial Russia and the Austro-Hungarian Empire died on battlefields from the Balkans to the Baltic, yet there are few, if any, memorials to them. The slaughter was every bit as great as that on the Western Front, and often just as futile. The two empires that sent their men into battle disappeared in the turmoil of 1917–1918; one was broken into fragments, and the other came under Bolshevik rule. Neither of the nations that were born out of the Austro-Hungarian Empire nor the new Soviet Union were minded to remember military service to previous regimes. My intention was to write an account of this war that would help explain how modern Europe was born, and how the imperfect peace at the end of the First World War almost inevitably led to another conflict a generation later, but I hope that my four books will also serve as a memorial to the forgotten men of Russia and the Austro-Hungarian Empire who marched, fought and died on the vast battlefields of the Eastern Front.

Prit's conclusion to his Eastern Front of World War I series will be published 21 September 2017. To preorder your copy of The Splintered Empires click here.