In today's post, author of Flashpoint Trieste: First Battle of the Cold War, Christian Jennings discusses the intriguing claims of the 'Free Territory of Trieste' organisation, who are keen to see the city and its surroundings returned to the supervision of the Americans and British, as it was after the war.

Is there a sovereign country right in the heart of Europe that you’ve never heard about? If you go to the centre of a beautiful piazza in the middle of Trieste, an ancient and mysterious seaport sitting at the top of the Adriatic, you might well find the answer. The Piazza della Borsa is one of the biggest and most striking in the city, its economic heart, dominated on the south side by the imposing nineteenth-century neoclassical splendour of the building housing the city’s Chamber of Commerce. Opposite it on the square are smart, sleek bars and shops, one of them a branch of the popular Italian underwear chain, Tezenis. As early summer shimmers its way across the cobalt waters of the nearby Adriatic, the shops in the square are full of bikinis and sunglasses and things for the beach. But in the windows of an office on the floor above Tezenis there is an extraordinary display.

‘Welcome to the Free Territory of Trieste,’ says a sign in letters three feet high. ‘USA and UK come back!’

What is this organization? And what do they want? The simple answer is they want the city of Trieste to be a ‘free territory.’ On one research trip to the city made by the author, two men were standing in the middle of the square with a banner. One of them was holding a blue clipboard, on which was attached a list of signatures. ‘The Free Territory of Trieste’ said his flag. On it was the coat of arms of the city, the red shield with the silver halberd in the middle, pointing upwards. It commemorates the silver lance of St Sergius, a Roman soldier martyred in Syria in the 3rd century AD for being a Christian. When he was put to death, says tradition, his halberd fell out of the sky and landed in the main square in Trieste. Kept in the cathedral of San Giusto, the weapon has reputedly never rusted, its metal refusing to accept gilding.

What do the two men want? A Free Territory of Trieste, is the answer. Free from who? Italy. A leaflet from the organization describes the cosmopolitan city’s diverse heritage, its multilingual makeup. One website devoted to the idea of a free territory in and around the city says succinctly that in Trieste, the Cold War never ended.

The city’s history has certainly been complex, rich, diverse and often bloody. There was Roman and Venetian occupation, with Trieste then becoming a vital, thriving seaport of the Austro-Hungarian Empire. After the end of World War I, the city and surrounding territory was given to Italy. After the Italian Armistice in 1943, the Germans occupied it, instigating nearly two years of a draconian regime run by the SS. A vicious counter-insurgency campaign was fought by the Germans and their Italian Fascist allies against partisans both from Italy and neighbouring Yugoslavia. The city itself had the only concentration camp in Italy with a functioning crematorium. 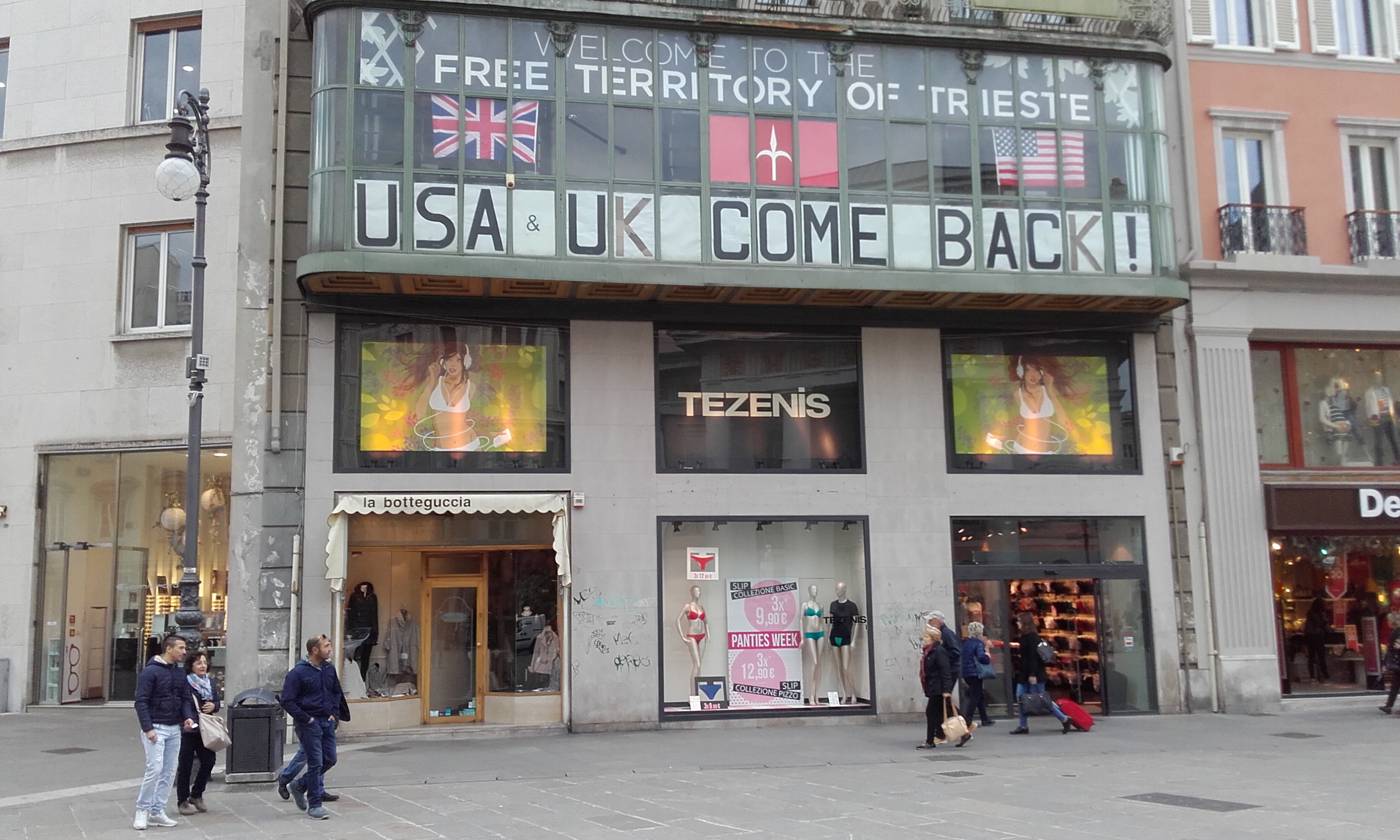 On the first day of May 1945, the Allied 8th Army, spearheaded by a tough New Zealand infantry battalion, raced to occupy the crucial port. World War II was shuddering to a halt, and all sides in Trieste who had made it through six years of war – Allies, Yugoslavs, Italians, defeated Germans – were determined not to take a bullet in the liberation. The Allies needed Trieste as a vital port from which to supply their armies of occupation in Austria. They were desperate to prevent Marshal Tito’s communist Yugoslav partisans, who saw the city and surrounding land as their territorial birthright, from occupying it for good. And behind Tito the Americans and British saw the Red Army and Stalin.

In the end, Marshal Tito’s Yugoslav partisans beat the Allies to the city by a day. And so Trieste was divided into two separate zones of control, one occupied by the British and Americans, one by the Yugoslavs. The first year of the Cold War in Trieste was a dark and sometimes murderous one, as Yugoslavs, Americans, British and Russians fought a bitter intelligence war in the shadows. A series of American and British officials governed on behalf of the Allies, backed up by 10,000 troops. And finally, after ten years of this eccentric administration, the city was given back to Italy after the US, Great Britain, Italy and Yugoslavia signed the London Memorandum in October 1954.

Now, says the Free Territory of Trieste movement, it’s time for the Allies to return. Trieste wants independence from Italy, they’ve said, with three official languages for the different peoples who make up the city’s population, be they Italian, Slovenian or Croatian. A law passed in 1945 by the Allied Commission in Rome declared the city a free territory, they note. The officials also quote the 1947 United Nations Security Council charter, which said that Trieste and its surroundings, including parts of modern-day Croatia and Slovenia, were to be a free territory. They want Trieste to be a free port and have an independent trading zone. The city is hugely multi-ethnic, and the Free Territory of Trieste organization described it once in an interview with the BBC as a ‘cold-weather Jerusalem.’ They said that Italy has imposed its sovereignty on Trieste and the surrounding territory.

But the truth is that according to the 1954 London Memorandum the city has been returned to Italy. The interim period of international occupation that saw the city divided into two zones of military occupation, one American and British, one Yugoslav, was an emergency buffer designed to keep a fragile peace as Europe and America faced off against Russia in the first years of the Cold War. And the 1947 United Nations Security Council Resolution that the Free Territory movement is quoting merely recognized this. But the independence-minded men in the beautiful piazza stick to their guns, and occasional rallies and gatherings in and around the city have seen up to 8,000 people gather. The movement has written several times to the UN in New York about the status of the city. It hasn’t heard back.

In the meantime, the ancient trading port of wine, banking, insurance and coffee continues with business as normal, as part of Italy. In the piazzas, at the bars, in the narrow back streets, and on the wide pavements fronting the vast sprawl of the port, the city’s inhabitants speak their different languages. Slovenian, Italian, some Austrian thrown in, as well as the Triestin dialect. The sea, meanwhile, says nothing. For thousands of years Romans, Venetians, Austro-Hungarians, Germans, Slovenians and Italians have come and gone from here. The Adriatic has seen it all before.

Flashpoint Trieste: First Battle of the Cold War, by Christian Jennings, is now available to pre-order from amazon by clicking here.