75 years ago, on the 15th February 1942, one of the greatest military defeats in British history occurred, as Singapore fell to the Japanese. The defeat of British General Arthur Percival’s forces of Indian, Australian and British troops, led to around 80,000 soldiers becoming prisoners of war. Below is an extract describing the final stages of the attack on Singapore, from Campaign 300: Malaya and Singapore 1941–42 by Peter Dennis, and includes artwork by Mark Stille.

The scale of the British demolition programme increased as the fall of the island looked to be imminent. The stocks of rubber were burned, and the tinsmelting plants and a number of factories destroyed. However, the demolition was actually handicapped by the staff and owners of some plants. Some facilities were given exemptions for morale purposes, so the overall scale of denial of useful military equipment and industrial facilities was incomplete.

On the early afternoon of 13 February, Percival held a conference with his principal staff and unit commanders. All present concurred that a counterattack had no hope of success, and Heath and Bennett both advocated surrender. Percival resisted this, but later admitted to Wavell that resistance would likely last only another day or two. On the night of 13/14 February, the last ships and seagoing craft in the port were ordered to leave for Java and Sumatra with 3,000 evacuees on board. The scale of Japanese attacks was reduced on the 13th, with the exception of the sector held by the 1st Malaya Brigade. 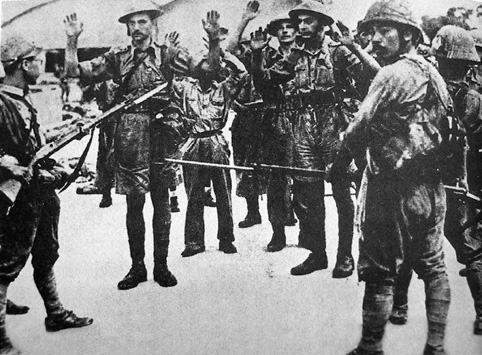 Surrendering troops of the Suffolk Regiment are held at gunpoint

The Japanese pressure on the western part of the perimeter increased on 14 February. By the end of the day, the Japanese 18th Division was some 3,000 yards from the southern outskirts of the city. In the centre, attacks by the 5th Division, supported by tanks, made progress down the Bukit Timah road and reached a residential area on the outskirts of the city. In the east, minor Japanese penetrations were cleared up by the end of the day. Adding to Percival's troubles, on the morning of the 14th, he was informed by the Director General of Civil Defence that the collapse of the water supply in the city was imminent. Another meeting with municipal authorities later in the day indicated that the water supply situation was slightly improved. Percival indicated to Wavell that the water situation did not change his intent to fight on.

Despite encouragement from Wavell to fight on, Percival’s situation was becoming increasingly perilous. There were now about one million people crowded into the city, and with the remaining troops of the garrison also spread out in every part of the city, the Japanese continued widespread shelling and  aerial bombing. This created severe casualties on the undefended civilians and  crowded hospitals and other temporary facilities used as hospitals with wounded. 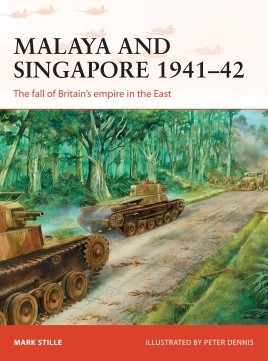 The following day, Percival was forced to bow to the inevitable. At a 0930hrs  staff meeting, the water situation was reported to be dire, with a total failure  expected within 24 hours. Food was adequate, as was small-arms ammunition,  but shortages in fuel and heavier ammunition were already evident. Percival  painted the situation as a choice between a counter-attack to regain control of  the water reservoirs or an immediate surrender. With a counter-attack clearly  impossible, this left capitulation. When Wavell gave Percival discretion in a  morning telegram to surrender if he felt it was no longer possible to continue  fighting, Percival made plans to end resistance.

Accordingly, at 1715hrs on 15 February, Percival and his chief of staff followed  Japanese instructions to proceed to the Ford Factory at Bukit Timah to meet  his Japanese counterpart. Yamashita demanded an unconditional surrender  from the reluctant Percival, and under threat of renewed Japanese attacks,  Percival agreed after a 55-minute discussion. The surrender was signed at  1810hrs and was effective as of 2030hrs that evening. The 70-day campaign  for Malaya and Singapore was over, and the greatest military defeat in British history complete.

You can read more about the fall of Britain’s empire in the East in Campaign 300: Malaya and Singapore 1941–42, which is available to order by clicking the title.