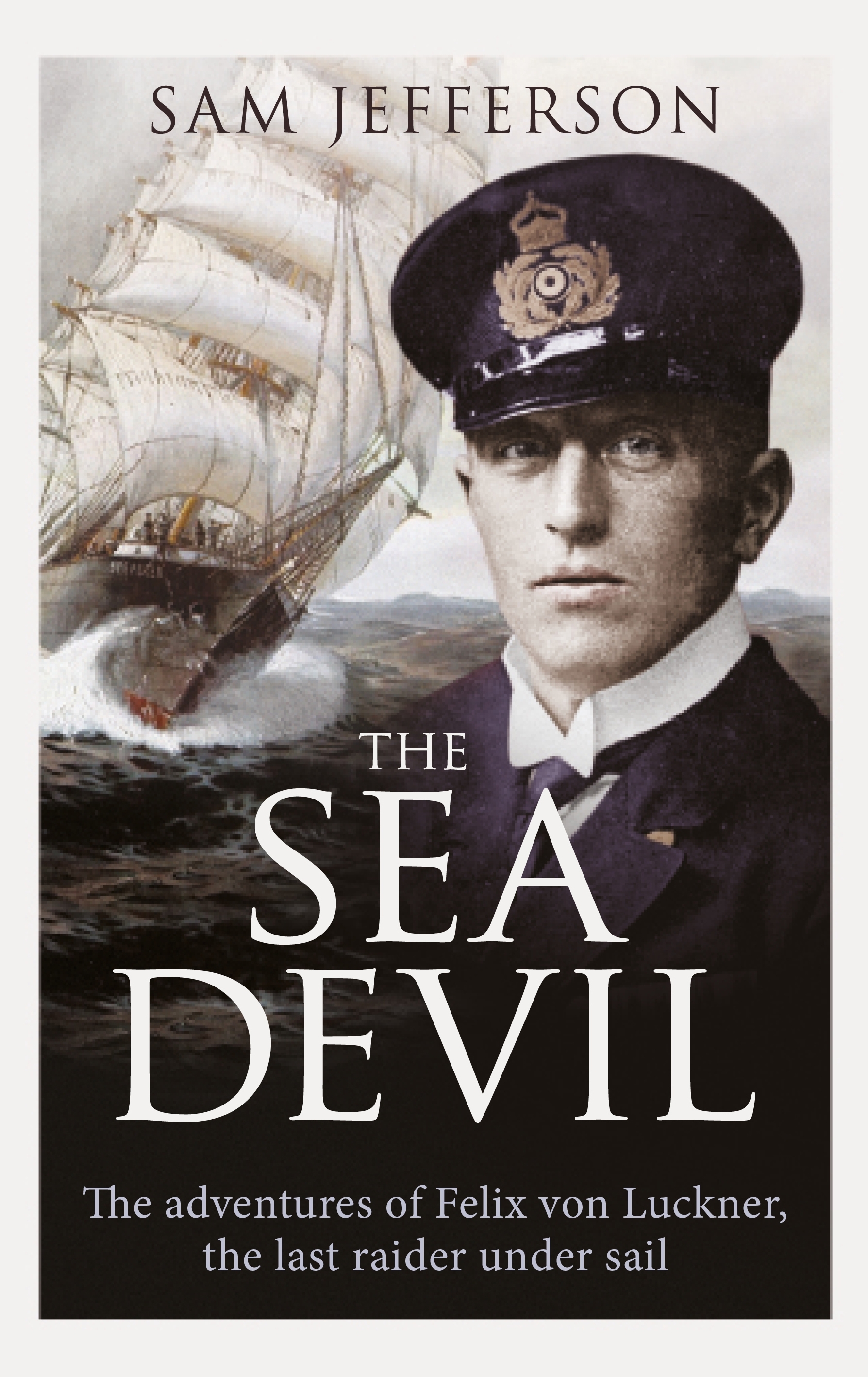 World War I can often be viewed in black-and-white; a conflict of trenches, machine guns, mud and mass slaughter.

Felix von Luckner shatters this perception, shining in vivid technicolour. A larger-than-life German aristocrat, von Luckner had an extraordinary war, serving at the battles of Heligoland Bight and Jutland, before being given command of the SMS Seeadler. A three-masted windjammer, the Seeadler, was a commerce raider and under his command it wreaked havoc with Allied shipping in the Atlantic and the Pacific.

Yet this was a different kind of war – one fought under old fashioned notions of gentlemanly conduct. Despite the Seeadler capturing and destroying fourteen ships, only one life was lost, and von Luckner was famed for the generous and lavish way in which he treated his prisoners.

To celebrate the publication of The Sea Devil, we thought that we would share with you six extraordinary facts about the life of this unforgettable naval commander.

1. His great-grandfather was a Marshal of France during the French Revolution.

Felix von Luckner came from an old Prussian family which had an impressive pedigree with its military service. His great-grandfather Nicolaus von Luckner was a Bavarian who had fought with the Hanoverians during the Seven Years War, before siding with Revolutionary France and becoming commander of the Army of the Rhine and a Marshal of France. Unfortunately, he fell afoul of the Revolutionary tribunal, and was executed by guillotine during the Reign of Terror in 1794.

2. Before joining the Imperial German Navy he had a number of extremely eclectic jobs.

Given that every member of his family in recent memory had served in the cavalry, it was expected that he would follow in the family tradition. Instead he felt the call of the sea, and so he ran away from home under an assumed name to serve as an unpaid cabin boy aboard the Niobe, a Russian tall ship, where his duties involved clearing out the latrines and mucking out the pigsty. Later, he graduated to such roles as as a member of the Australian Salvation Army, lighthouse keeper’s assistant, kangaroo hunter, boxer, soldier in the Mexican army, before finally ending up as a beggar in Jamaica. It was there that he joined the navy of his homeland and began his rise up the ranks that would eventually lead him being given command of the SMS Seeadler.

3. He dressed up one the ship’s crew as a woman in order to fool a British boarding party.

In order to get the Seeadler past the Royal Navy blockade he had to make serious modifications to dress his ship as a Norwegian clipper, but he also had to make plans to fool a British officer in case one came on board. He discovered that Schmidt, one of the mechanic’s assistants, had suitably feminine features, and so appropriated him as his ‘wife’, fitting him out with a dress, fake breasts and a blonde wig.

An example of this is the story of the capture of the Horngarth. He tricked the state-of-the-art armed British merchant ship into coming alongside by faking a fire on board using smoke bombs and having his ‘wife’ run around on deck in a panic. After Horngarth came within close range, Seeadler opened fire, but the fight was still in the balance. That is until the Seeadler’s crew was ordered to prepare to ‘fire their torpedoes’, which induced the British ship to surrender. It was only after he was brought on board that the British captain realised that there never were any torpedoes aboard the Seeadler.

5. His prisoners were treated lavishly with champagne-fuelled parties.

Belying the Allied stories of Teutonic barbarity, von Luckner was famed for his ‘Captain’s Club’ dinners, where he treated his captive audience to generous meals washed down with fancy wines and champagne, serenaded by the ship’s band. His prisoners came to respect the officer that had sunk their ships, with one stating that, ‘He was a true sport and treated us all fair and square... we were treated with the utmost courtesy throughout and allowed the run of the ship and the free use of the stores.’

6. He escaped from a New Zealand prison after putting on a fake Christmas play.

He was eventually captured and sent to a prisoner-of-war camp at Motuihe in New Zealand. Not content to wait out the rest of the war in captivity, he formulated an escape plan that involved persuading the camp commander to let him put on a Christmas play that involved a re-enactment of the battle of Jutland. This allowed them to assemble some realistic looking weaponry, equipment and other provisions, including a sail that was originally the theatre’s curtain, which they used to help plan a successful breakout.