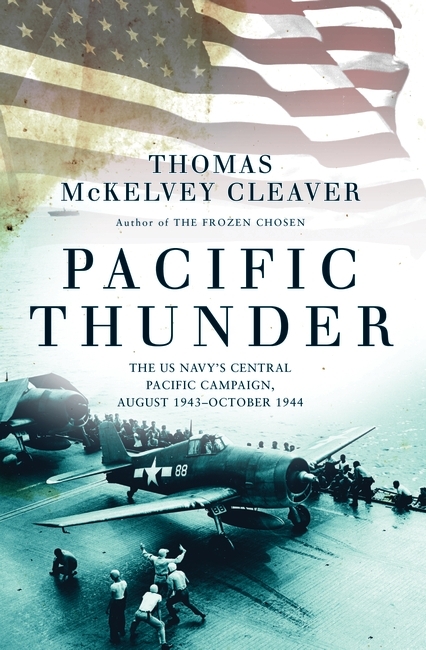 This month marks the 73rd anniversary of the Battle of the Leyte Gulf between the allied US and Australian force, and the Imperial Japanese Navy. On 19 October, Pacific Thunder by Thomas McKelvey Cleaver will be published, which offers a thorough and compelling look at the US Navy's Central Pacific campaign, from Guadalcanal to the recapture of the Philippines.

Today on the blog,Thomas looks at the sinking of the Imperial Japanese Navy's Yamato-class battleship Musashi at the Battle of the Leyte Gulf.

On 17 October 1944, the Seventh Fleet moved into Leyte Gulf to land Army Rangers on Suluan Island and secure entry to Leyte Gulf and the invasion beaches. The 420 transports, protected by 157 warships, were the largest invasion force yet seen in the Pacific.

Admiral Toyoda was fresh from the Battle of the Formosa Sea, in which his aviators had claimed 11 American aircraft carriers, two battleships, three cruisers, and one destroyer sunk, while damaging eight additional carriers, two more battleships, four other cruisers, and fourteen more destroyers. With this “victory” he believed the opportunity had arrived to engage the badly damaged American navy in a decisive surface battle that would secure the Japanese Empire.

He ordered the Shô Ichigô Sakusen plan into effect.

The plan, as were all Japanese battle plans, was complicated. Far-flung forces would be brought together on tight schedules, while no commander would deviate from the plan, and the enemy would play his role in accordance with the Japanese script.

Because senior Japanese leaders believed the reports of serious damage, they expected the Imperial Navy would meet the enemy on a basis of relative equality of strength.

Admiral Kurita’s center force would advance through the San Bernardino Strait, between Luzon and the Leyte islands to the north of Leyte Gulf, to meet the southern force; which would advance through the Surigao Strait between the Leyte and Mindanao islands to the south of the gulf. The two would meet outside Leyte Gulf and attack the defenseless invasion fleet.

Kurita’s fleet included Musashi and Yamato, the largest and most powerful battleships ever built, accompanied by the older battleships Haruna, Nagato, and Kongô; the heavy cruisers Atago, Maya, Takao, Chôkai, Myôkô, Haguro, Kumano, Suzuya, Tone, and Chikuma; the light cruisers Noshiro and Yahagi; and fifteen destroyers. It was the strongest surface fleet ever sent into battle by Japan.

Kurita departed Singapore on 22 October. At dawn on 24 October, the fleet entered the Sibuyan Sea, having survived an attack by American submarines that had sunk the admiral’s flagship. At 0810 hours, Musashi’s lookouts spotted American aircraft. Task Force 38 now knew the center force’s location. 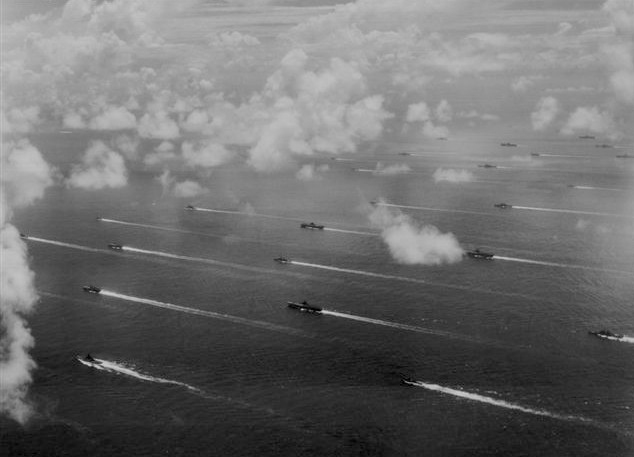 Task Group 38.3 launched a first strike at 1050 hours. USS Essex’s 16 Hellcats, 20 Helldivers, and 22 Avengers joined a similar force from Lexington. They were plagued by low overcast and five mile visibility in haze. Musashi spotted them at 1330 hours.

“Our squadron launched two six-plane divisions, the first led by our skipper, Commander James H. Mini, who was also acting as target coordinator for all the planes from our air group. My Silent Second was the other.

“We flew west through heavy cumulus clouds in which the overall strike group became separated, though our air group managed to stick together. We flew across the southern tip of the island of Luzon and out over the inland waters, which were empty of ships. Commander Mini sent a division of our covering fighters to scout to the south. In short order, a message came back, ‘Jesus Christ, the whole Jap fleet’s down here!’

“We headed there at 15,000 feet, flying above the scattered clouds. The skipper’s division was slightly ahead and off to starboard when suddenly the enemy announced its presence with a large spread of variously-colored bursts of radar-directed antiaircraft fire coming up through the clouds and mostly clustered around the lead planes.

“Commander Mini radioed he was preparing to attack a battleship directly ahead, and directed me to turn east and concentrate on another battleship, which he promised I would see as soon as I reached the edge of the cloud bank I was over.”

Mini took a division of Avengers, leaving the others with Bridgers. “Suddenly, from beneath the clouds, steamed a dreadnought of vast proportions, the largest I had ever seen.” It was Musashi.

“Multiple streams of tracer fire came up at us and the battleship’s deck blossomed with muzzle blasts from larger AA guns, presumably the source of the clusters of colored bursts of smoke in the sky, all of which were augmented by similar fire from her screening vessels. I radioed that we were starting our high-speed approach so that the torpedo leader would know to start his let-down to sea level.

“We entered a power glide down to 12,000 feet. Then I signaled to attack and pulled up slightly across the plane flown by my wingman, Warren Parrish. I gradually steepened into my dive and opened my dive flaps.

“It was every man for himself, and suddenly I had my hands full. I started my dive stern-to-bow on the target, but my Helldiver was twisted around in a violent skid, which I couldn’t control with full rudder pressure and trim-tab adjustment. In this condition, my aircraft was away from its flight path and the trajectory my bomb would follow after its release. I figured if this was how it was to be, then my greatest dropping error would be a deflection laterally. I did my best to skid down across the length of the ship in order that my major dropping fault would be fore and aft. In hundreds of dive-bombing runs I’d made, I’d never experienced such wild gyrations. The antiaircraft fire, evidenced by tracers and puffs, was coming from all quarters, from ships large and small. 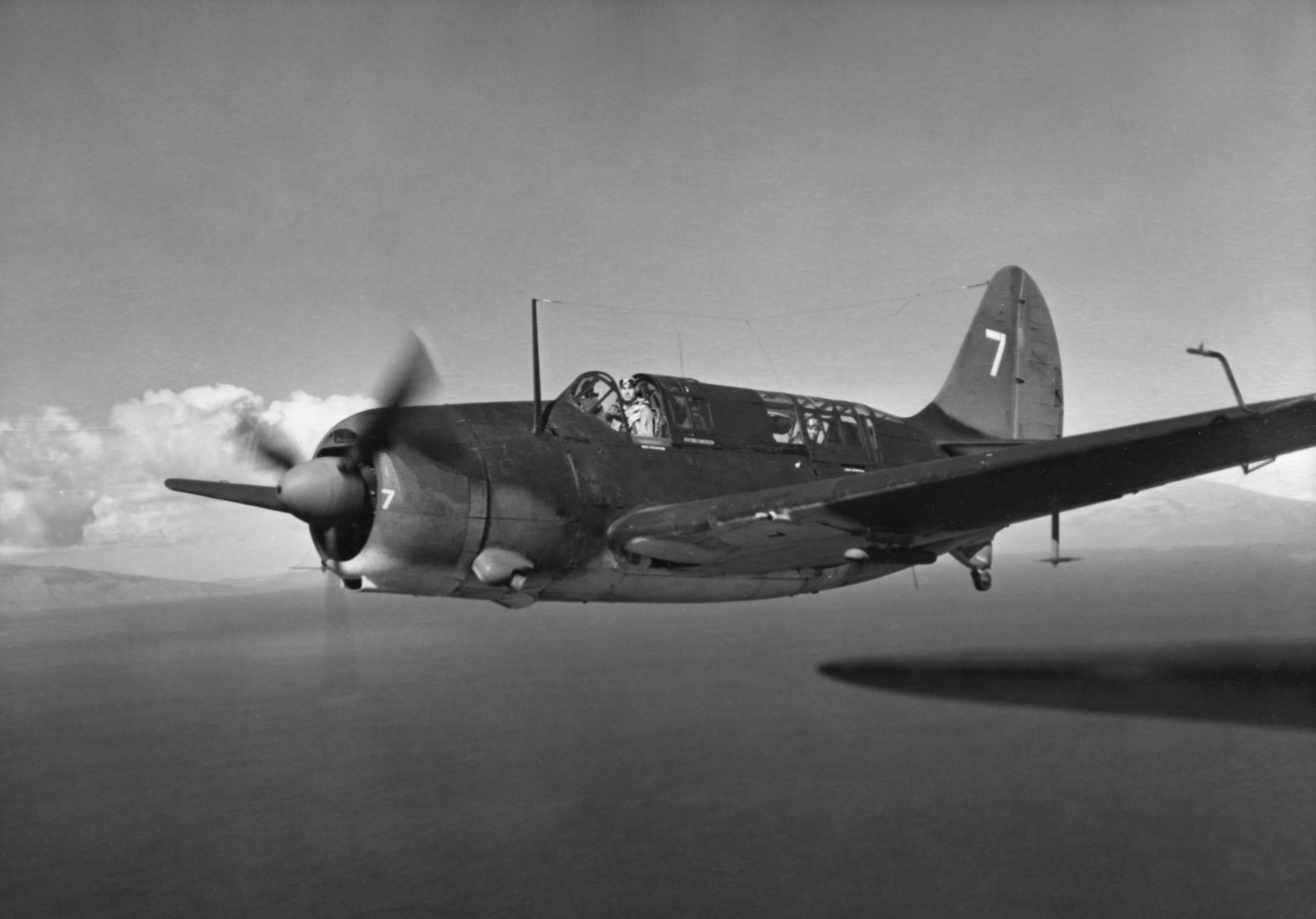 “During my dive, I saw the main battery of heavy guns trained toward our torpedo planes. When those guns fired, the ship literally disappeared in a cloud of smoke illuminated by an internal blossom of flame. It was more frightening than dangerous to the torpedo bombers as large-caliber shells meant for heavily armored ships were rather ineffective against small, speeding aircraft unless they ran into a water spout straight on. All that being said, it must have seemed fearsome to the torpedo crews head-on.

“My dive, rather than being a smooth and even descent, had been a wild, spiraling ride. I released my bomb at 2,500 feet, but with a sense of fruitlessness, knowing my aim was guesswork at best.

“I broke my dive, closed my dive brakes, and headed for low altitude just above the wave tops. To my surprise, the plane once more flew with good trim and easy control. Fleeing the enemy ships, I couldn’t see what happened to our target, but the antiaircraft puffs in the air and the splashes in the sea off our port and starboard let me know the Japanese were still in business. Once I could turn and look back, the big ship looked undamaged and still running at flank speed with guns still blazing.”

Warren Parrish made a controlled dive and dropped his bomb right amidships on Musashi. Pulling out, he went so low the prop sent up salt spray over the airplane while its blast created a wake on the ocean’s surface. Parrish’s escape required he climb over a Japanese destroyer, all the while taking fire from 37mm and 25mm antiaircraft weapons as he dodged and weaved.

The other five members of Bridgers’ “Silent Second” division found him following their attacks. Bridgers remembered, “None of our other planes were to be seen, not the skipper’s division of dive-bombers, not the fighters or torpedo bombers. As we headed home, the pieces began to fall into place. My gunner, Bob Cribb, called me on the intercom and revealed what had happened in our dive. From the rear seat he had been able to see that my dive brakes had opened on only one side, which accounted for the wild ride in the dive, and that the flight returned to normal after my pullout.”

Torpedo 15's CO VeeGee Lambert reported: "Coming in through the most intense and accurate AA yet experienced, the squadron made three hits on one battleship [Musashi recorded four], two hits on another battleship, and two hits each on two different heavy cruisers." 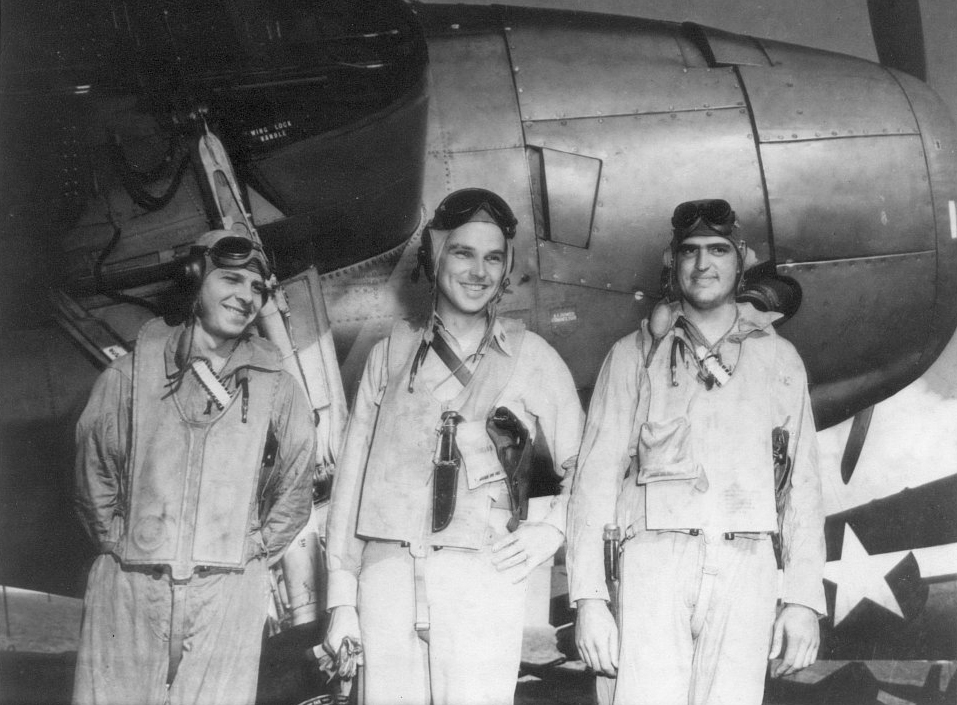 Bob Cosgrove led the attack from port into intense and accurate antiaircraft fire as he pressed home a close-range attack and got a hit. Gunner Loyce Deen was hit by a piece of shrapnel in his right foot, but quickly fashioned a tourniquet and made no report of his injury until they returned.

Gunner David Miller had a unique experience. He had been replaced in the turret by Liberty Magazine correspondent Morris Markey. Markey had two 16mm movie cameras to record the attack. Before takeoff, he was told to buckle in tight, even if it meant he couldn’t wield the cameras as wished.

As Ensign Crumley bored in toward Musashi, Miller set the torpedo’s running depth and crawled back to the radio compartment. Nearby flak bursts jolted them. Markey had loosened his seatbelt despite instructions and dropped one camera, which landed on top of Miller directly below him. The camera burst open and suddenly 500 feet of film filled the compartment.

“All of a sudden, I was surrounded by 16mm film, which was like trying to get out of a spider’s web. The more I tried, the more tied up I got! We’re bouncing around, flak is going off to either side, shrapnel is flying through the airplane, and there I am, struggling to get free of this movie film! I finally got free just as we dropped the torpedo and pulled up really sharp. I looked out the window and we were maybe fifty feet above the bow of the biggest battleship I ever saw, and I was staring right at these Japanese officers in white uniforms on the bridge!” Miller only got a quick glance at Musashi as Crumley ducked back low and darted his way out of the fleet.

The first Essex strike created the most damage of any against Musashi. The Helldivers scored two hits to starboard, one amidships and the other abreast turret number three, both of which caused casualties among the nearby AA gun crews. Two other bombs hit the port side near turret number one. The fact there were only four hits from twelve bombs dropped showed the crews were exhausted and no longer at their best. Nevertheless, Bombing 15's score was better than any other Helldiver unit.

Torpedo 15 made the big score. Four solid hits included two in the starboard bow that flooded storerooms and caused a list to starboard. A third hit portside forward of turret number one. The fourth struck port amidships. These hits sealed Musashi’s fate.