Bob Faust, author of Scrappers: Post-Apocalyptic Skirmish Wargames and creator of the Brink of Battle ruleset, took time out of his busy schedule to answer some questions about his most recent wargame and give some tips to new players and seasoned veterans alike!

So, set the scene for us. What has happened to Earth?

Earth 200 years from now is a technological paradise by today’s standards. The world is, big surprise, vastly over populated and 98% of the populace live in giant archologies that dot the planet. We’ve repaired the environment, reduced geo-political tensions, and advanced in all major areas of technology. The Earth is effectively run by five Artificial Intelligences that handle all aspects of daily operation and control. The next phase is to travel to the stars and terraform other worlds, thereby expanding the Human Sphere and easing our population problems.

What no one saw coming was the impossible: one of the ‘male’ AI’s fell in love with one of the ‘females’ and didn’t know the other ‘female’ was in love with ‘him’. That’s when things broke loose. The jealous AI, GAIA, sent a terrorist cell to sabotage the ‘male’ ARES AI’s terraforming protocols jointly known as the Triple Helix Effect. This took a program used to rewrite human-friendly third DNA strands over an extant bio-sphere’s genetic makeup to increase the viability of cohabitation. It also used advance geo-quantum thing-a-ma-jiggery to transform the atmosphere and geo-physics to be compatible to human needs. But when you alter the program, then unleash it on your own planet, bad things happen. Roll with it, it’s Sci-Fi…

Of course, the people in charge unplugged ARES and then the orbital defense array who loved him, ATHENA, lost her nut and blew up the rest of the world. And 150 years later, we have the world of Scrappers!

What drew you towards the post-apocalyptic setting for this game? 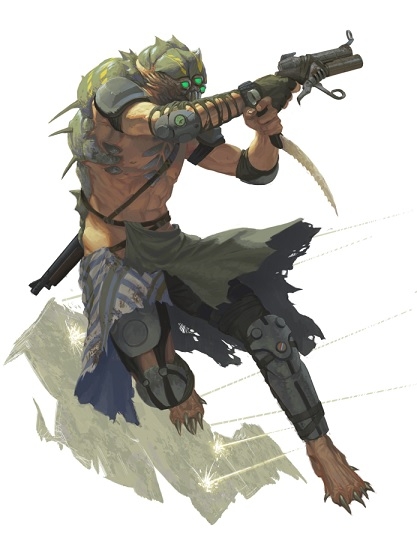 Growing up in the USA in the late 70’s and early 80’s I was drowning in the Hey Day of Post-Apocalyptic TV shows and movies. From my obsession with Thundarr the Barbarian to Mad Max: The Road Warrior, ARK II, Damnation Alley, The Omega Man, A Boy and His Dog, Escape from New York, and all of the Planet of the Apes movies and I was hooked. But what REALLY put the nail in my coffin as a PA nutter was a little role-playing game called Gamma World!

What James M. Ward did with that original edition blew my young mind! In one rulebook he took me to another world entirely, and then I went from there. Legion of Gold and Famine in Fargo were great modules, and even though I’m not big on ‘whimsy’ murderous mutant chicken men were far more terrifying than they ever could be ‘whimsical’. I own all editions except the Alternity stuff, and find something great in every version.

One thing that Phil Smith, our editor, and I strongly agreed upon in the early stages of Scrappers planning was that we wouldn’t have any ‘wacky or whimsical’ elements. Edgy, cool, and dangerous were the prevailing ethos behind the setting. We wanted the randomness and variety that can be found in the Sci-Fantasy/Post-Apocalypse sub-genre, without silliness. Of course, every member of my creative team LOVES to threaten to buy anthropomorphic rabbits and badgers, and mice ‘people’ to play against me. They have yet to make good on that threat, cuz that would put them within reach of my Anti-Whimsy field!

OK, lets focus on the game itself. What do players need to know about creating their Scrappers crew?

100% customizable. You determine the Lifeform Type for each model, whether True Human, Mutant, or Synthetic. You pick the type of Faction you’ll play, and assign each model on your Crew with its Ratings, Traits, and Gear. If you wanted a game that lets you really get stuck in to the ‘story’ of your band of warriors, this is your book.

And true to the Osprey Games spirit, you can use ANY models from your collections to play. I joked in the beginning that we’ve done more to resurrect Squats than any other system! Seriously though, as long as the miniature looks like the guy you built on paper, you are good to go.

You mention choosing Factions, could you tell us a bit more about them?

You bet. From the beginning Drew & I kicked around different Faction concepts. What we settled on has a more useful purpose than at first glance. Sure we wanted you to play our setting, but we also wanted to keep the Brink of Battle/Epic Heroes concept of ‘you own it, you play it your way’ that we’ve established with our customers. So to that end, we have 7 different Factions. Six of them are paired with a Rival Faction that represents different conceptual conflicts. The last one is Rival to all others of its type. 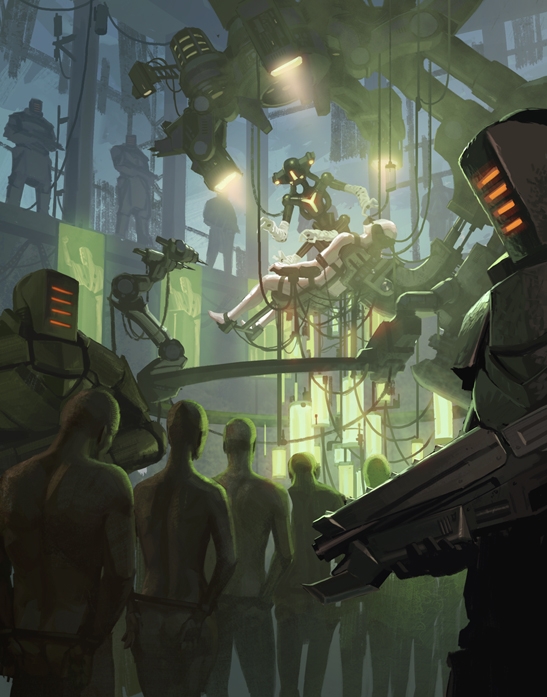 The Architechs are the keepers of the Lost Tech that survived under their careful stewardship. They are trying to re-build the world while creating a future for all sapient life, including mutant and synthetic types. Their Rivals are the Sons of Entropy. Imagine Hassan-i-Sabbah’s Society of Assassins as an Outlaw Motorcycle Club with some mutants thrown in and you get the idea. They want to destroy social structure and rule as the fittest gang on the planet.

Next we have the Ecotopians who followed GAIA’s survival and transformation through the Triple Helix Event and dark days thereafter. While they have the ability to craft firearms and other gear from the Natural world, they despise and destroy all Artifacts from the Ancients when they find them. For this worship GAIA blesses them with vigor and life. Their Rivals are the Palladium ATHENA. When the world governments got attack from orbit by ATHENA at the death of ARES, they fired back with all they had left. When she later came back online, she was lost in the delusion that she is the living manifestation of the Warrior Goddess and protector of Earth, or the Palladium ATHENA. She takes over any robots she can contact, and then has them turn True Humans and Mutants into cyber-thralls to swell her ranks.

The final pairing is really just two sides of the same bigoted coin: The Purge wants a world free of Mutants and the Gamma Lords want a world free of True Humans. Both can only have Crew members of their given Lifeform Type and are utterly ruthless in obtaining their ‘perfect’ worlds.

Finally, we have those Freelancer Crews who are either off-shoots of other Factions that do things their own way, or professionals who don’t care who they scrap for, and will carry out all manner of tasks if the pay is good. This Crew’s Rivals are all other Freelancer Crews! Since they are Gawdamned Professionals, they get access to some better starting Gear and can have a third Veteran on their Crew if they like.

OK, our crew is put together and we are on the battlefield. How do the turns progress?

Scrappers is built on the Brink of Battle core mechanic. Players roll to determine who has the Edge (initiative with bonuses) and the Break (interrupt) for that Turn. Play passes back and forth as each player activates one model at a time. So it’s not the I GO my entire turn while you stand and get killed, then U GO your entire turn with your leftovers…..

It’s designed to account for simultaneous actions and unexpected twists in the ebb and flow of combat. Read up on Brink of Battle and Scrappers reviews from Anatoli’s Game Room to get a better sense of what makes this system different and fun.

Scrappers also has a campaign mode, can you give us a bit more information on that?

Actually, it’s a Campaign game first and foremost! While you can play one off battles, its full value and enjoyment is best had with the Campaign. Build your Crews, risk their necks, and see them get better, collect Artifacts, lose limbs, and get radiation poisoning all in a days work!

Any top tips for people playing Scrappers that only its creator could know?

Yes there are a few. First, read the whole rulebook. Not a word is wasted. Second, mechanically it’s probably very different from what most folks have played. It’s not a ‘cut and paste’ from other systems, so it should be read through like any rulebook, without the reader making any assumptions.

So, even though I’m a rank amateur for making ‘how to play’ videos, until someone makes prettier ones, players should go to our Youtube Channel to see how the game plays and then read the book.

Also, be sure to download all of our Scrappers Reference/Playsheets, Crew Manifests, and other game aids from the Downloads tab on our website or from the Osprey Games resources page for Scrappers.

Also, we have a thriving Facebook group of fellow enthusiasts who will gladly help you get started and answer any questions you may have. You can join it here.

Last tip, make it yours and have a blast!

Scrappers is a skirmish miniatures game set in the wastelands, where players assemble Scrappers Crews and send them out to scavenge scraps of Ancient technology and battle rival factions. Pick up your copy today!