On 21 October 1805, 27 British Royal Navy ships sailed towards 33 French and Spanish vessels off Cape Trafalgar near the city of Cadiz. At stake was not only the outcome of this short naval campaign, but British independence, as the loss of her navy would leave her exposed to invasion and conquest by Napoleon’s armies.

What resulted was one of the most decisive battles, not only of the Napoleonic Wars, but in the history of naval warfare, as it would secure British dominance of the waves for the next hundred years and help lead to the downfall of Napoleon’s European empire.

Less than a month later, an illustration was published by the artist Robert Dodd showing the British ships audaciously approaching the enemy line in the opening phase of the battle. This image features in Mapping Naval Warfare, Jeremy Black’s new book for Osprey Publishing, and is accompanied by this description: 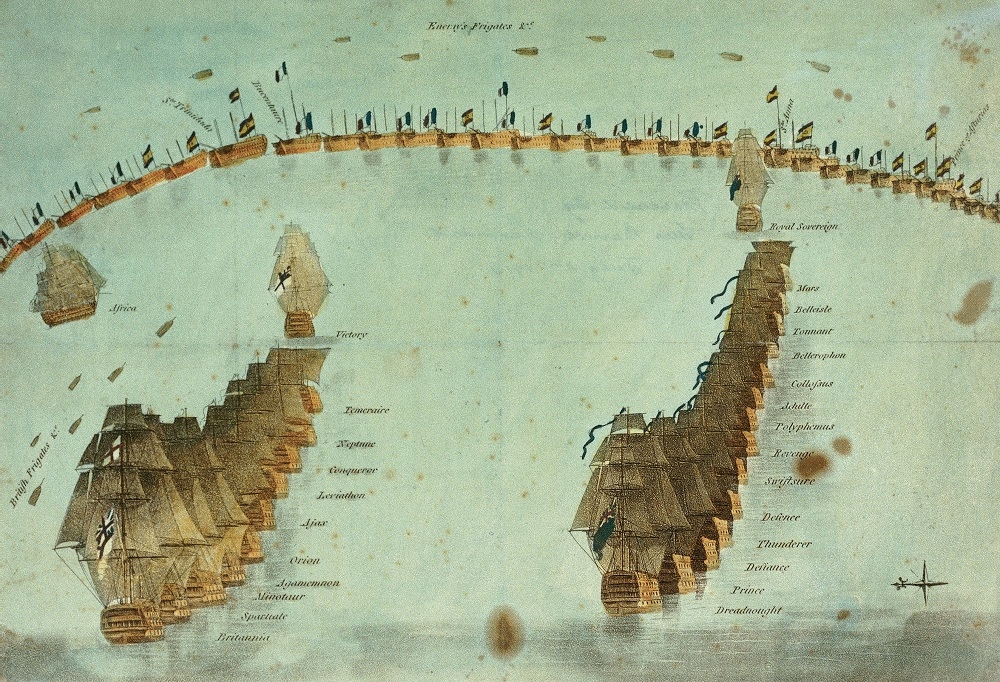 “Although the British fleet is shown with full rigging, the ships of the Franco-Spanish fleet are almost diagrammatic. Under the plate is a note from Dodd explaining that, for clarity’s sake, he ‘has judged it best (to avoid confusion that the smallness of scale would occasion), to dispense with exhibiting their sails and rigging, which if introduced, would in this view, have prevented their different flags from being seen’.

“At Trafalgar, the fighting quality of individual British ships, which was based on seamanship and the rapid rate of close-range fire by a trained crew, was combined with a bold command culture which emphasised manoeuvre and seizing the initiative in order to close with the opposing fleet and to defeat it in detail after it had been divided by intersecting the opposing line.

“Nelson’s plan and tactics provided the opportunity for British gunnery and seamanship to yield their results. Nineteen French and Spanish ships of the line were captured, giving Britain clear naval superiority, but Napoleon’s victories over Austria, Prussia and Russia in 1805–7 ensured that the War of the Third Coalition ended with France in a far stronger position in Europe than at the start of the conflict.”

If you would like to see more maps, charts, photographs and prints from the history of conflict at sea, check out Mapping Naval Warfare, which was released earlier this week. Click this link to order your copy today!