Bob Faust, author of Scrappers: Post-Apocalyptic Skirmish Wargames and creator of the Brink of Battle ruleset, talks about the creative drive behind the decisions he and Andrew Davies made when creating the game, and the reasons behind some of the gameplay choices.

Growing up during the Cold War, I have always had a fascination for Life After The Bomb. More specifically, with dystopian science fiction and Apocalypse survivor settings like Gamma World, Mad Max, or Logan’s Run.

So it was a natural progression that one day I’d release my own vision of Life After the Bomb based on my Brink of Battle: Skirmish Gaming through the Ages rules. The one thing I didn’t want to do was tread the same ground that other Post-Apocalypse themed games had already covered.

When Drew and I started working on Scrappers it was under the premise that we were going to produce a version of Brink of Battle that was easier to learn, faster to play, and oozing with setting specific elements that would lend itself to fit the tastes of a wide range of gamers.

We also wanted a timeline far enough ahead to have ‘edge of space’ science and technology that would then go through an ‘end of days’ event which would result in its survivors searching for high tech artifacts of the Ancients. We also wanted the ‘lower tech’ of the setting to be close to par with our current level of firearm technology coupled with scarcity of resources and random encounters to increase the tension of our games. 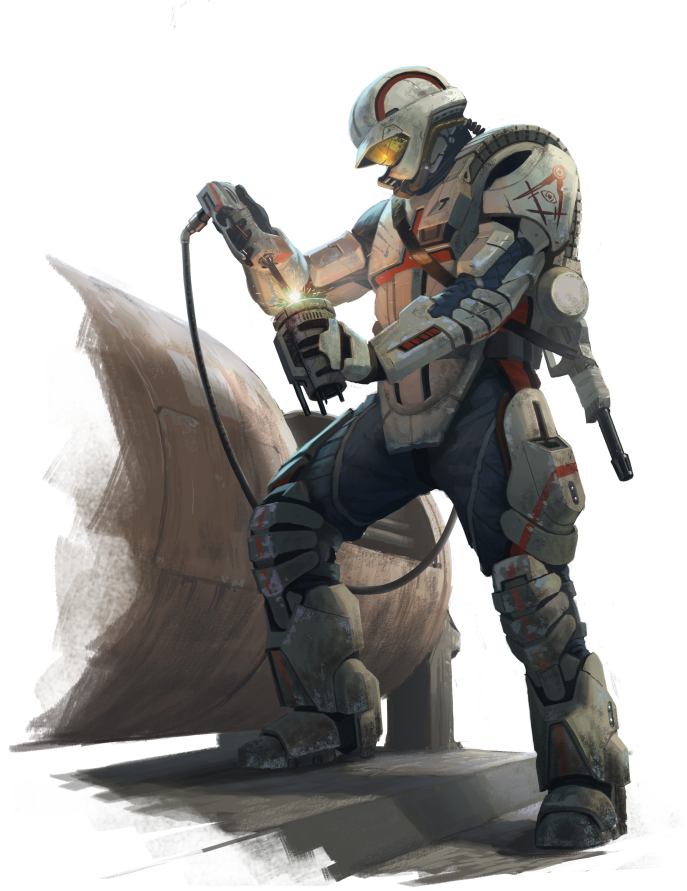 The Scrappers backstory starts roughly 200 years from now. Earth’s population is enormous and its operations are controlled by five artificial intelligences that span the major areas of civilized living with an eye toward space colonization and defense from stellar collisions or potential invasions if hostile lifeforms were encountered.

I wanted something original in the backstory and came up with a love triangle between three of the AI’s leading to a plot by the jilted AI to destroy the object of ‘her’ affection. The plot succeeds and the ‘male’ AI at the center of the triangle is deleted by the humans governing the program. This makes the other ‘female’ AI go insane, as her programming did not account for love and grief in such acute amounts.

We can’t find an instance of a love triangle between AI’s in any sci-fi medium, so if any of our dear readers know of one, we’d love to hear about it. There are no new ideas they say, but here’s hoping!

The deleted AI had been sabotaged to release the terraforming protocols known as the Triple-Helix Effect. This added a third strand of DNA to any biological lifeforms encountered on other worlds, and was to alter those biospheres into human compatible environments. At the same time, the non-biological components were also altered to become habitable and ready for colonization.

However, when unleashed on Earth, the whole thing went off the rails and either killed or mutated large numbers of people and other biologicals and also terraformed the environment in bizarre ways. Once the ‘male’ AI’s deletion triggered insanity in the other ‘female’ AI, she turned all of her weapons on the Earth in order to kill the murderous humans. This added nuclear and biological weapons into the mix and pretty handily destroyed the world.

Fast forward 150 years to when games of Scrappers take place. The Earth survived, barely. Humans that were not affected by the Triple Helix Effect were few and far between. Others not killed by the events of the Apocalypse found themselves mutated and no longer True Humans. And then there were the robots that survived and suffered their own difficulties in a high tech world brought low to barbarism. Now, True Humans, Mutants, and Synthetics band together and search the remaining ruins of the Ancients in hopes of finding Artifacts of sufficient power and utility that they can gain dominance over the world. And after all they’ve been through they still don’t get along… 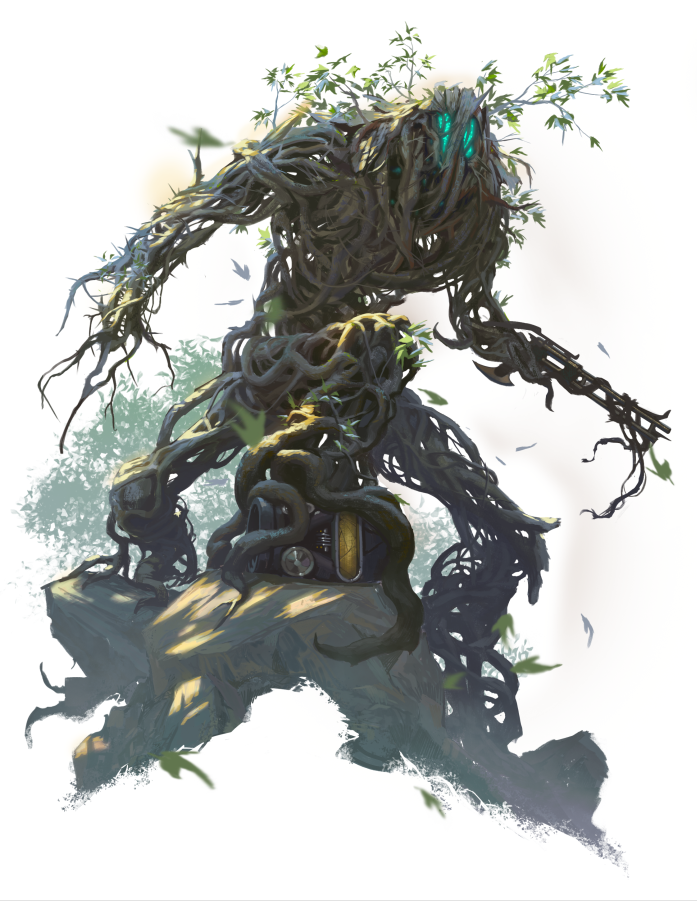 We wanted players to have something to use as a starting point for building their Scrapper Crews and Factions were a natural fit. Since building each Crew member is done in a free form way and not pulling a direct pre-generated stat line from a ‘list’ having a Faction to guide the assembly of a Crew was a must.

Additionally, nothing helps player buy-in like giving them the bones of a faction and leaving plenty of room for them to flesh out their ideas. This means that no two Scrapper Crews will be the same, even if they have the same Faction.

Each Faction also has a rival Faction it loves to hate. With the 6 paired rival Factions representing the distance between civilization and anarchy, human and mutant bigotry, and low versus high tech, we’ve hopefully captured the essence of these struggles in each Faction theme.

Rival Crews don’t rout as often when fighting each other and always gain more Experience points for Wounding enemies out of the game, so there is an actual mechanical benefit to fighting a rival Crew.

Each Faction has a special feature that changes the way they play in the game. Each feature gives a strategic or logistical benefit to that Faction that represents their unique culture, training, or other abilities.

Scrappers uses the Lifeform Type to help define the major differences between True Humans unaltered by the Triple Helix Effect, Mutants who were changed by that event, or self-aware Synthetics who have their own agendas.

Each Lifeform Type informs the players about the game mechanics involved. Each type grants access to an exclusive list of Traits and Gear that is useable only by models with those specific Lifeforms.

There are also subdivisions that must be taken within some of the Lifeform Types which further defines that model’s role on the Crew. For example, each Synthetic model must choose a Series sub-type from Thinker, Warrior, or Worker; each with its own twist on the core Synthetic Lifeform Type.

The Rules of Engagement

Our core following of Brink of Battle players will really enjoy this section on how to play the game. We’ve refined the main Brink of Battle rules so that they are not only tightly focused on the type of battles found in the Scrappers universe, but also to be much easier to learn for new players.

All of the intuitive mechanics are still in place, but with more economy of verse than before. After working on Brink of Battle for six years prior to its release in 2012, I found that some of my methodologies were clunky and not as reader friendly as I had hoped. Big lessons learned are wasted if not implemented, and so Scrappers makes clarity a top priority.

And as with BoB, our opposed roll, d10 based, alternating activation system keeps all players fully engaged in the game and keeps the dynamic tension at a high level right up to the end. 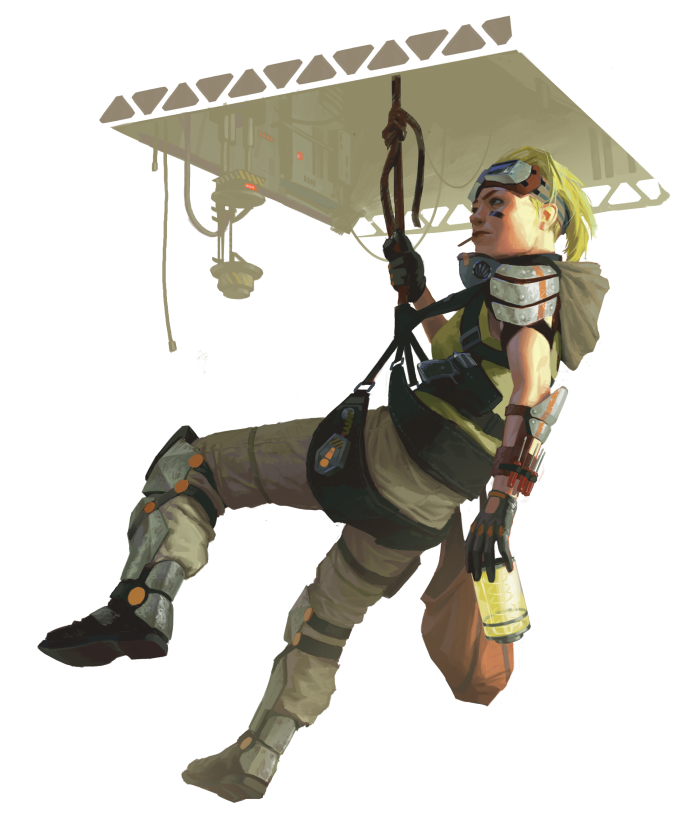 While people can play one-off games with Scrappers, the game is meant to be played in a Campaign with friends.

Models will earn Experience points when they defeat enemies in a game. These can be saved up and used to purchase Ratings increases or to improve or acquire Traits.

Crews will also be able to participate in Commerce between games so they can sell off their Scrap Tokens for Supply Points and grow their Crew roster, buy up better Gear, etc.

All models Wounded and removed from play must pass a Trauma Check in the After Action Report period between games. Each Lifeform Type has its own Trauma Table which determines the nature of the injury and how it will impact the Wounded model.

Finally, any Artifacts acquired during play will be identified and added to the Crew’s manifest for use in future games.

While the ‘core’ mission in Scrappers is about recovering Scrap Tokens, there are three variant missions that may crop up from game to game that alter the base mission in some significant way.

In every game, regardless of Mission type, players will check for an Event each time the first four Scrap Tokens are picked up. Events represent things like environmental conditions, stashed Gear or Artifacts, and deadly encounters with mutated plants, animals, and malfunctioning robots. Deadly encounters or powerful Artifacts come into the game through the Event system. Only one Event can occur per game.

Since the timing of the Event is random, the tension of play steps up a notch and creates a very dynamic range of strategic and tactical choices for both players.

With the amount of variety between Crew build options, Missions, and Events, Scrappers offers an endless combination of taut, exciting games in a futuristic wasteland that is trying to kill you just as much as your rivals!

Pick up your copy of Scrappers: Post-Apocalyptic Skirmish Wargames today and see how you fare in the nuclear wastelands!