A: Because it was a truly decisive war, both from a global and military historical point of view. These 80 years saw the birth of a nation which managed to grow from a rebel regional upstart to a global super power in barely 50 years. At the same time the war brought to its knees the most powerful and global empire ever, leading to its eventual disintegration. The main cause for all of this was the rebel’s army. In just a few decades the new Republic of United Provinces changed its army from a late medieval temporary mercenary force to a modern standing drilled force, the States’ Army. Maurice, Prince of Orange, Count of Nassau etc. and his cousins developed and implemented most of the reforms when they were in their twenties and thirties, driven by the need to defeat Spain’s tercios. Thanks to their success, their new model army was copied throughout Europe. The steadfastness of such drilled armies became the bedrock of western hegemony. Even today we still use the commands and army philosophies developed back then by Maurice.

Q: In a nutshell, what were those reforms?

A: Drill, from the individual all the way up to the army (the word ‘drill’ itself was invented back then from how onlookers experienced the soldiers’ never-ending practice: ‘going around in circles’); marching in step; two part commands; smaller manoeuvre units; skirmisher units; a standing army; standardization; proper bookkeeping. Those are the more permanent reforms. Arms and equipment changed as well, for example snaphaunces and vaulting-spears were introduced in the skirmisher corps. Other less visible changes include the vastly improved speed to deploy from the march into a battle line, and the control and steadfastness that drill creates. The importance of introducing drill has been overlooked so far by military historians, who tended to focus on numbers, formations and economics. But the perfectly balanced battalion, paid on time and deployed in the perfect line is quite useless if it will waver under fire or can’t form square within the minute it takes cavalry to charge home.

Q: Some say the reforms were simply the formalization of existing practice?

A: Fire by ranks, the counter-march, smaller units: all these were known in some form or another back then, that’s true. But Maurice went much further than simply formalizing some of the things he may or may not have known already. For example: only a thoroughly drilled unit will be able to give continued, controlled fire by ranks … or files, or platoons, or whatever: the States’ troops had to master many firing drills. Drill made units dependable and controllable throughout the battle, not just when they were fresh and neatly deployed. 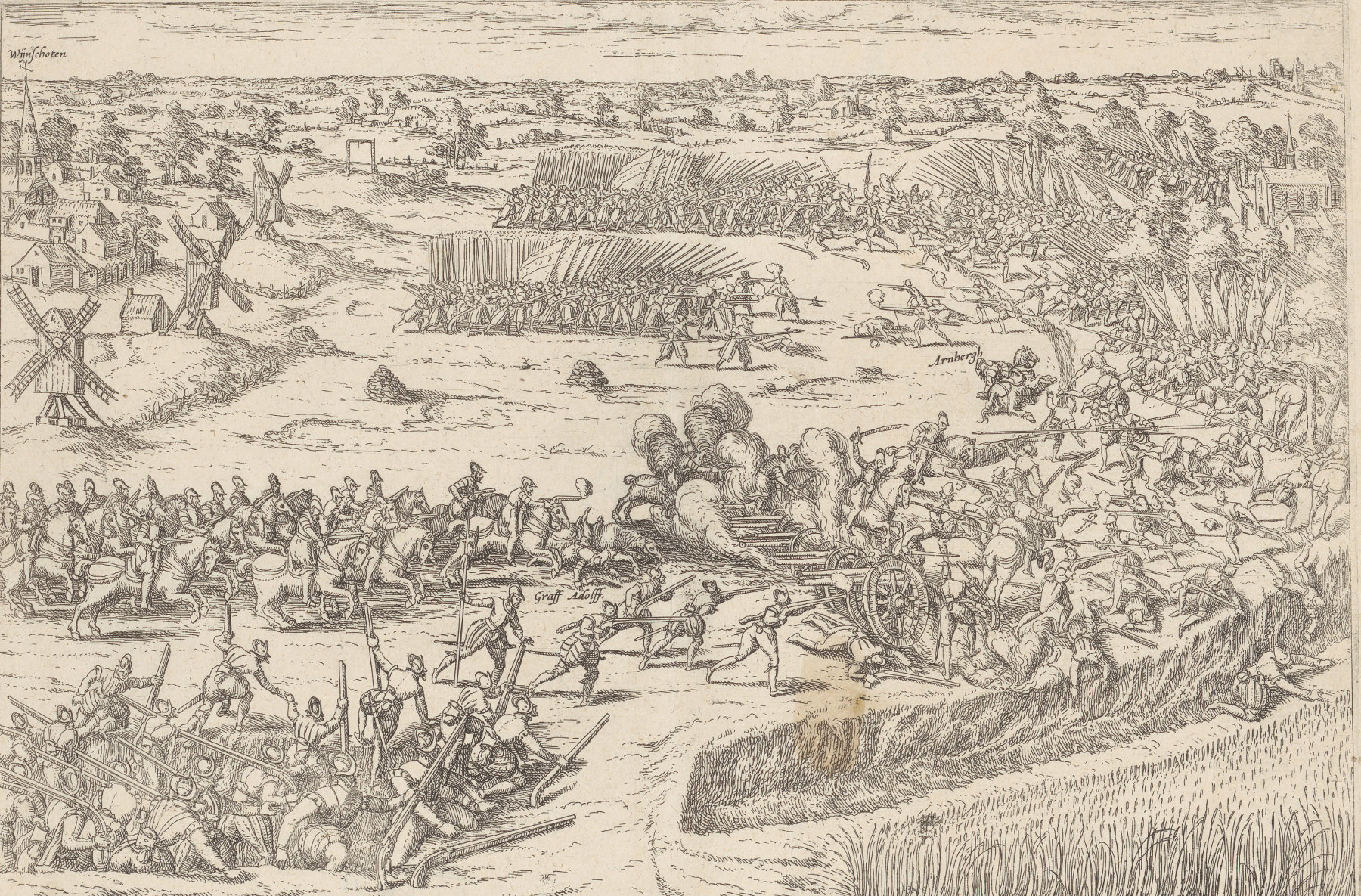 The start of the war: the battle of Heiligerlee in 1568, rebels on the left (1570 by Hogenberg, Rijksmuseum Amsterdam)

Q: Not long after Maurice, we encounter the reforms of Gustavus Adpolphus, how do they relate?

A: John “the Middle”, Count of Nassau, was one of the cousins who helped Maurice with the reforms. His extensive notes survive to this day. After the reforms he briefly served the Swedes. A young Gustavus was taught by a veteran from Dutch service. There are more links like this. The republic and Sweden also had close economical ties: Dutch arms manufacturers set up huge factories in Sweden. As a result, the Swedish army implemented many of the Dutch reforms, including the so called Swedish Brigade (volume 2 will show more). The Swedish sub-units were shallower though, like the Nassau experiments from the early 1590s. Interestingly, Gustavus decided to change his infantry from ten deep to six deep after he visited John in 1620, who by then was a proponent of such a decreased depth. This required less manpower, which was a huge advantage for Sweden’s conscription army. On the other hand, the ten deep formation had almost 70% more shots to fire before it would run out of ammunition, which is a tremendous advantage in a prolonged firefight: it can continue firing longer and faster than the shallower unit. Perhaps this is why Gustavus kept such a large reserve of musketeers behind each brigade.

Q: The 30 Years’ War was a huge conflict on the republic’s eastern border. Did that affect the war?

A: Yes, very much indeed, the peace that ended the 30YW also ended the 80YW. There was a lot of overlap between the two conflicts. The republic marched deep into Germany on at least two occasions. At one point overall command of the protestant forces was offered to Fredrick Henry, Maurice’s half-brother. France and the republic formed an alliance during the 30YW, and the two cooperated closely in the Spanish Netherlands (resulting in the Battle of Rocroi for example). The other way around, Spanish forces were supported by their allies from the Catholic League. Pappenheim, for example fought a vital battle against republican forces to try to relieve Maastricht. Generally speaking, most conflicts overlapped with most other. Spain and the Republic would actively help each other’s opponents, even during the truce or in far away places like Angola.

Q: Is there an English angle?

A: Indeed there is. The very first complete regiment raised by the republic was English, in 1572. Spain claimed the English throne, while English and Scottish burghers admired the rebels’ fight. Money and volunteers flowed to Zeeland and Holland, the two richest republican provinces. What started out as tolerated local support bloomed into state support with London sending big subsidies and many units across the Channel. The failure of the Spanish Armada of 1588 was a joint effort of the English and republican navies – and Scottish weather. Many English and Scottish gentlemen served in the republican army. Most went back home, to teach and use the ways of the new model army. Others, like Henry Hexam, stayed in Holland and wrote English books about it. Many more common men served the republic, so many in fact that commands were translated into English and Scottish for those units. During the final stages of the war England and the republic grew apart again, because of overseas competition and religious zeal. This eventually led to the Anglo-Dutch Wars, the Dutch invasion of England in 1688 and a Dutchman – William III – on the English throne. How different the world’s history would have been had Elizabeth agreed to become Queen of the Netherlands, as indirectly offered by the republic in the 1580s. 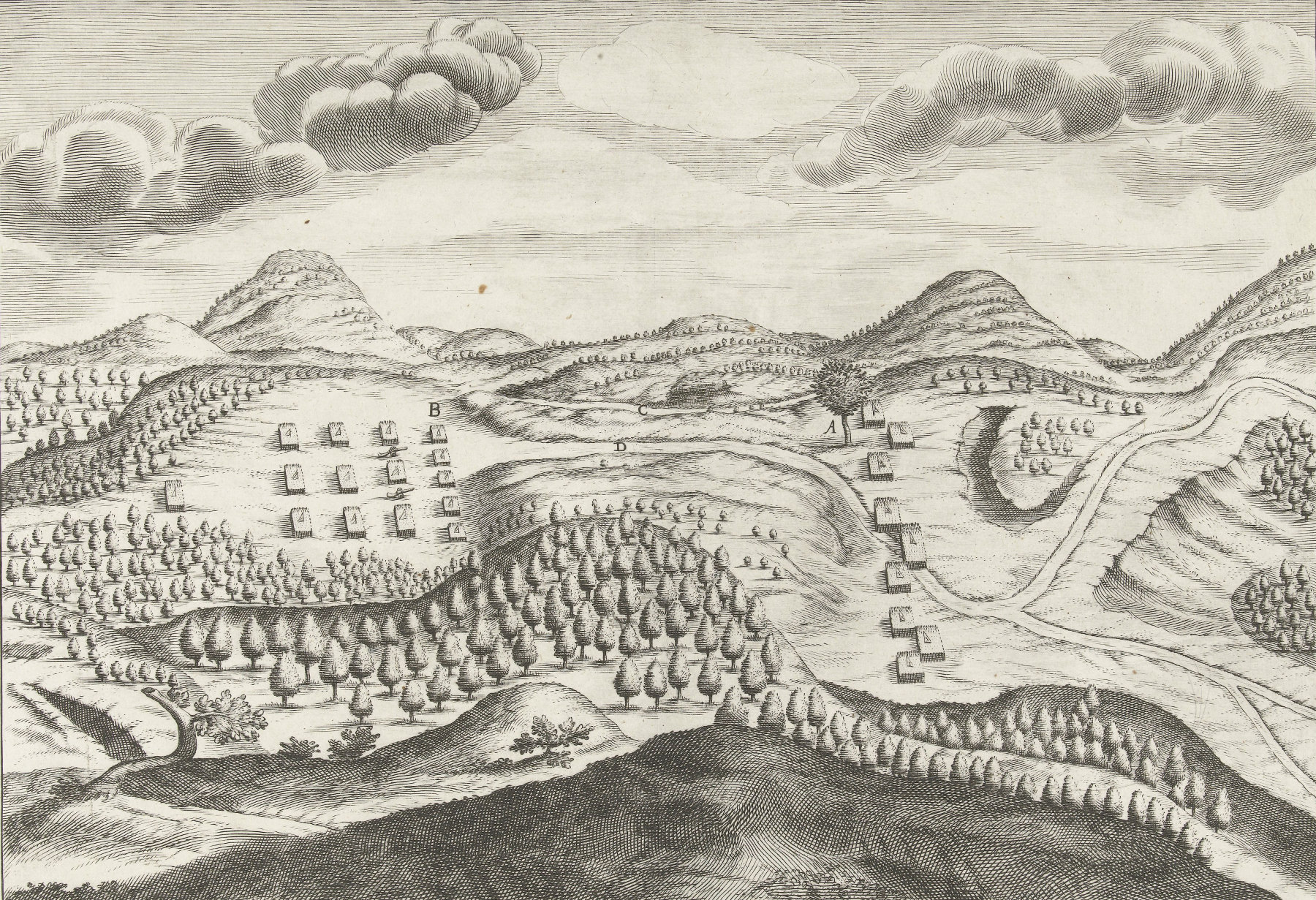 Far away in Brazil: the battle of Porto Calvo in 1636, republicans on the left (1636 by anonymous, Rijksmuseum Amsterdam)

Q: You already mentioned Gustavus, Pappenheim, and Rocroi: they remind us of the many big battles fought during the 30 Years’ War. For the 80 Years’ War, most can come up with a handful of battles at best.

A: The 80 Years’ War saw well over a hundred battles, and that’s not counting engagements on the water, siege assaults, and raids. Some of the battles, especially the early ones, were small compared to the better known 30YW battles. But that first period was a very bloody civil war, and even small battles could be decisive. The American War of Independence shows a similar trend: some of its best known battles are really quite small. Volume 1 has a chronological list of these hundred–something battles, as well as a regimental genealogy of the 40 regiments that were in the republic’s service for at least five years. It also includes some never before published infantry banners.

A: It does have a nice ring to it. The DWI – if we want to use that label – was part of the 80 Years’ War with Spain. First came the period of civil war, from 1568 until 1588. This saw William the Silent lead the rebels. In 1581 they signed the Declaration of Independence, William was assassinated in 1584. The rebels then tried to find a new leader and a royal house to belong to, but failed. Finally in 1588 the rebel provinces decided to go it alone as a union. This can be seen as the start of the Dutch War of Independence. William’s son Maurice was asked to become the new leader. He immediately started the army reforms, then started the offensive. In 1596 the union entered the Triple Alliance, with England and France. Some see this as the international recognition of its independence, but the war with Spain continued. Between 1609 and 1621 an uneasy truce was somehow maintained. Maurice died in 1625, his half brother Frederick Henry took over. By then the war itself had become more outward oriented: the 30 Years’ War had started, and with it came international alliances and operations abroad. This period, from 1621 to 1648, was the Coalition War. Some split up the period further, but the advantage of the threefold division is that it coincides with the rule of the three main leaders.

Bouko's newest book Dutch Armies of the 80 Years' War 1568–1648 will be published on the 23rd March and is now available to pre-order by clicking here.